Engineering the atmosphere: Is it possible? And would it prevent catastrophe, or cause it?

It may be possible to alter the atmosphere and create "global dimming." But is the solution worse than the problem? 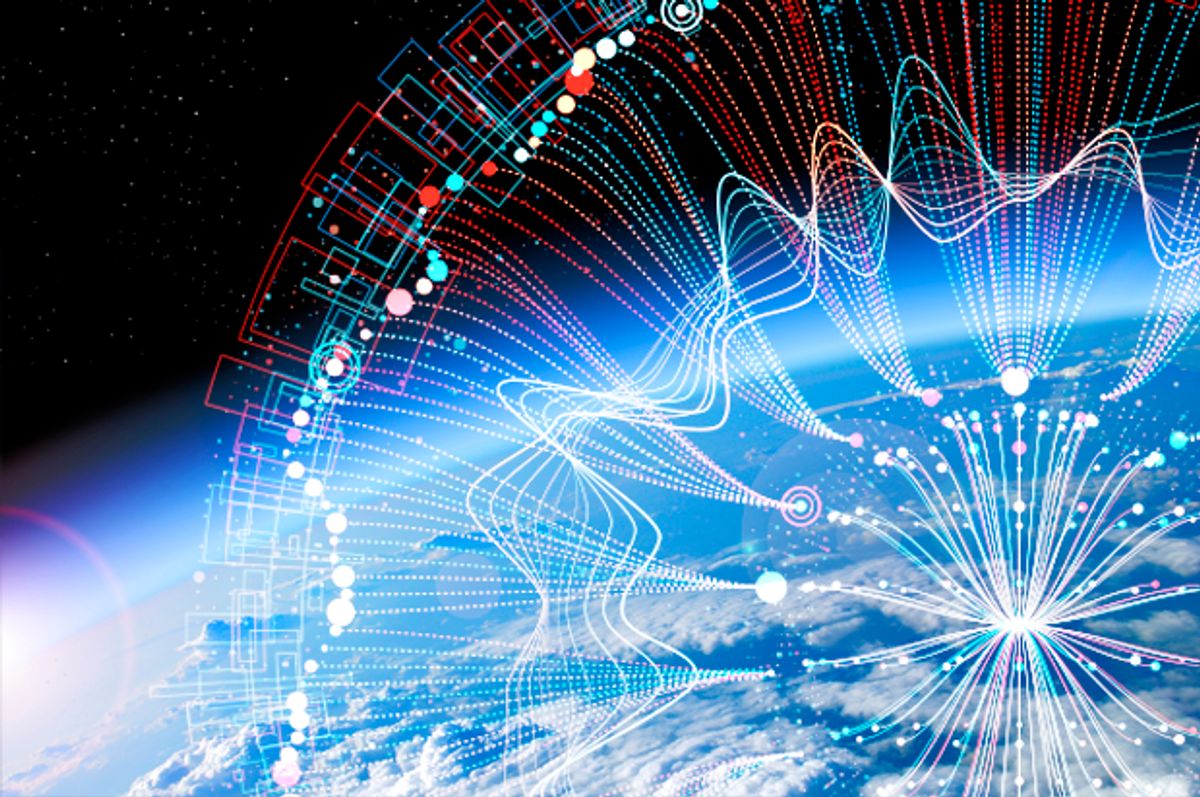 As many readers are well aware, the prospects of a livable planet for future generations went from bad to worse after the 2016 presidential election. This is why the Doomsday Clock, maintained by the venerable Bulletin of the Atomic Scientists, ticked forward this year to the highest level of danger since 1953, which was perhaps the closest humanity has yet come to a secular apocalypse (aside from the Cuban Missile Crisis).

Yet there are strong reasons for suspecting that the clock will inch even closer to doom next year, as the Trump administration rolls back more and more regulations aimed to protect the environment. In fact, just last week the EPA removed most of the climate change information on its website to “reflect the approach of new leadership.”

Given the political momentum toward inaction to curb the clear and present danger of anthropogenic climate change, a growing number of scientists are starting to take seriously the possibility of what’s called “stratospheric geoengineering.” This would involve injecting sulfate aerosols into the stratosphere to deflect incoming sunlight back into space, thereby resulting in global dimming. This is basically what happens after a large volcanic eruption: Sulfur dioxide is thrown into the stratosphere where it becomes sulfuric acid, which prevents solar radiation from reaching the ground. For example, a volcanic eruption in 1815 resulted in “The Year Without a Summer,” as it's called, across the Northern Hemisphere due to reduced incoming light. If the planet becomes unbearably hot, inducing an artificial winter of this sort could potentially restore normal temperature levels, thus obviating widespread agricultural failures, megadroughts, epidemics and pandemics, sea-level rise, more infectious disease, political instability and so on.

But there are a number of worries associated with stratospheric geoengineering. One is that messing with the highly complex, chaotic system of the global climate could have dangerous unforeseen consequences. As the cosmologist Lawrence Krauss told me in a recent interview, “At this point … the unknowns outweigh the knowns” — which is, if anything, an understatement. The most knowledgeable folks among us — scientists in the relevant fields — really don’t know how anthropogenic global dimming could alter weather patterns or if there could be long-term repercussions that end up being worse than unchecked climate change itself.

Geoengineering with sulfur aerosols also wouldn’t tackle the root cause of climate change, namely the ongoing release of huge quantities of carbon dioxide that would otherwise remain sequestered in subterranean fossil fuel reserves. The problem with carbon dioxide isn’t just that it’s trapping heat in the atmosphere but that it is acidifying the ocean. In fact, studies show that the rate at which humanity is lowering the oceans’ pH is faster than the rate at which supervolcanoes acidified the oceans some 252 million years ago, during the biggest mass extinction event in Earth’s history, known as the “Great Dying.” Already, marine ecosystems are collapsing, the shells of snails are dissolving (due to acidification) and one scientific study even extrapolates that if current trends continue unabated there will be virtually no more wild-caught seafood by 2048.

Another problem with excessive carbon dioxide in the atmosphere is that it can affect human cognition. That is to say, studies show that higher concentrations of carbon dioxide result in lower cognitive performance. Not only do many of us spend our days in sealed buildings where carbon dioxide levels can skyrocket, but our planet recently passed the ominous milestone of 400 parts per million (ppm) of carbon dioxide in the atmosphere, which is irreversible in the foreseeable future (i.e., it is almost certainly true that no human today will ever experience an atmosphere with less than 400 ppm). And some studies suggest that atmospheric carbon dioxide could exceed 1,000 ppm by the end of this century. In contrast, humanity spent nearly its entire existence breathing in air with a mere 180 to 280 ppm of CO2. As carbon dioxide levels continue to climb, we should expect this to take a subtle but measurable toll on our collective ability to solve the increasingly formidable existential problems before us.

But let’s say that a stratospheric geoengineering program is implemented and is fully successful at turning down the global thermostat. This situation would still bring with it monumental risks. The reason is that sulfate aerosol injections would need to be made on an ongoing basis, without any interference. Yet no one can guarantee that such a program wouldn’t be interfered with, given the unpredictable vagaries of wars, terrorist attacks, shifts of political power, economic recessions and so on.

The executive director of the Global Catastrophic Risk Institute, Seth Baum, and his colleagues describe what they call a double catastrophe scenario whereby an initial catastrophe, such as a major war between states that causes societal collapse, disrupts the regular injection of aerosols into the stratosphere, thereby causing a second catastrophe involving the climate. The latter event could induce widespread famines, social unrest, and economic meltdowns — or, at the extreme, it could precipitate a runaway greenhouse effect that turns Earth into an uninhabitable hellish cauldron like our planetary neighbor Venus. The result would be human extinction.

In a phrase, once a stratospheric geoengineering program has been established by anyone, anywhere, it must not be interrupted for any reason, especially not abruptly. But one or more interruptions cannot be ruled out, hence the existential danger.

Making matters worse, geoengineering of this sort could be relatively cheap — indeed, much cheaper than reducing the carbon footprint of civilization. According to one estimate, “the annual cost of stratospheric aerosols could be less than $10 billion per year, which is orders of magnitude less than the costs of climate change mitigation strategies.” This could enable not just states, but non-state actors and even sufficiently affluent lone wolves to unilaterally implement a global dimming program. For example, a fatuous billionaire like Peter Thiel could, on his own, build something like “factories on the ground [that] pump sulfur dioxide upward through miles-long hoses, their nozzles held aloft by high-flying zeppelins.” There are currently no laws that would prevent him from doing this alone. Nor are there any international restrictions that would prevent a single country, such as the rapidly vanishing island nation of the Maldives, from doing the same.

The result is a situation that a group of Oxford University researchers call the “unilateralist’s curse.” The idea is simple: Imagine that the ultimate value of some action — such as geoengineering — is negative. Within a large population, there are bound to be some individuals who misjudge this value to be positive. Consequently, if these individuals have the power to act unilaterally, the action in question is very likely to be undertaken, and since its value is negative, the result is a worse situation for everyone. (The solution to this curse is for everyone to abide by a “principle of conformity” that prevents unilateralism.) Stratospheric geoengineering is a paradigm case of this conundrum: Injecting sulfate aerosols into the atmosphere will soon be possible for a large number of actors, at least some of whom are likely to judge the outcome to be good. But if the outcome is bad — for example, if it has severe negative unforeseen consequences — the entire planet could suffer.

Having said this, there are also arguments for taking stratospheric geoengineering seriously. For example, there is a nontrivial possibility that it could save human civilization from a sudden climate emergency. This is why the Global Challenges Foundation argues that, if a final-hour geoengineering program were successful, then the failure to inject aerosols into the stratosphere could itself “constitute a global catastrophic risk.” And a “sudden climate emergency” isn’t out of the question, since there could be climate thresholds that, once crossed, result in rapid and pervasive disruptions to the global climate system. In fact, a 2009 report authored by nearly 30 scientists from around the world, including several Nobel laureates, suggests that humanity has already crossed three of nine “planetary boundaries,” these being alterations to the global nitrogen cycle, the rate of biodiversity loss and climate change. As they write:

Anthropogenic pressures on the Earth System have reached a scale where abrupt global environmental change can no longer be excluded. … Transgressing one or more planetary boundaries may be deleterious or even catastrophic due to the risk of crossing thresholds that will trigger non-linear, abrupt environmental change within continental- to planetary-scale systems.

This is consistent with a 2012 article suggesting that humanity may be approaching a sudden, irreversible and catastrophic collapse of the global ecosystem — or, in the more clinical phraseology of science, we may be on the brink of a planetary “state shift.” The point is that humans alive today could encounter unprecedented transformations of Earth system processes that warrant drastic (and indeed desperate) countermeasures like stratospheric geoengineering. The risks of such action would be, as many scientists unambiguously emphasize, severe — but so would inaction.

This is why a group of scientists at Harvard University plan to conduct the first “serious geoengineering experiment” within a year. As the Science correspondent Eli Kintisch puts it, this “represents the transition from this being a theoretical set of thought experiments, or computer simulations, to actual work in the atmosphere.” Backed by a $20 million program, these scientists will “use a balloon-borne probe to inject water vapor into the stratosphere above the Arizona desert to reflect some of the sun’s light away from Earth.” Journalist Dan Falk summarizes the experiment as follows:

The Harvard experiment will be … modest in scale. The plan is to release one kilogram (just over two pounds) of water in the stratosphere, creating a plume of water vapor a kilometer long and 100 meters wide. The balloon can then be steered back into the plume to measure the effects. Later tests may use other substances, such as calcium carbonate or aluminum oxide. But even then, the scientists stress, the amount of material released would be less than that produced by a commercial jetliner during one minute of flight.

What’s infinitely frustrating for many scientists is that the solution to our climate change woes is both fully known and entirely feasible: Humanity needs to stop burning fossil fuels, relying instead on renewable resources like solar and wind power. Yet a large demographic of right-leaning anti-science folk will make this necessary economic shift improbable in the foreseeable future. The result is a growing number of scientists who are reluctantly acknowledging that geoengineering may become an integral component for ensuring our collective survival on this pale blue dot.

The Harvard study will constitute a first crucial step towards better understanding both the risks and potential efficacy of stratospheric geoengineering. It will assuredly not be the last. In the meantime, those of us with the power of the ballot should continue to do everything we can to evangelize for evidence, facts and truth — in this case, the inconvenient truth that civilization is currently locked into a trajectory toward disaster.

Parts of this article draw from my forthcoming book “Morality, Foresight, and Human Flourishing: An Introduction to Existential Risks.”