Gerrymandering did this: How the GOP's redistricting master plan brought us Trumpcare — even though most people hate it

Most Republican House members fear their right-wing base more than they fear the Democrats. It's a toxic combo 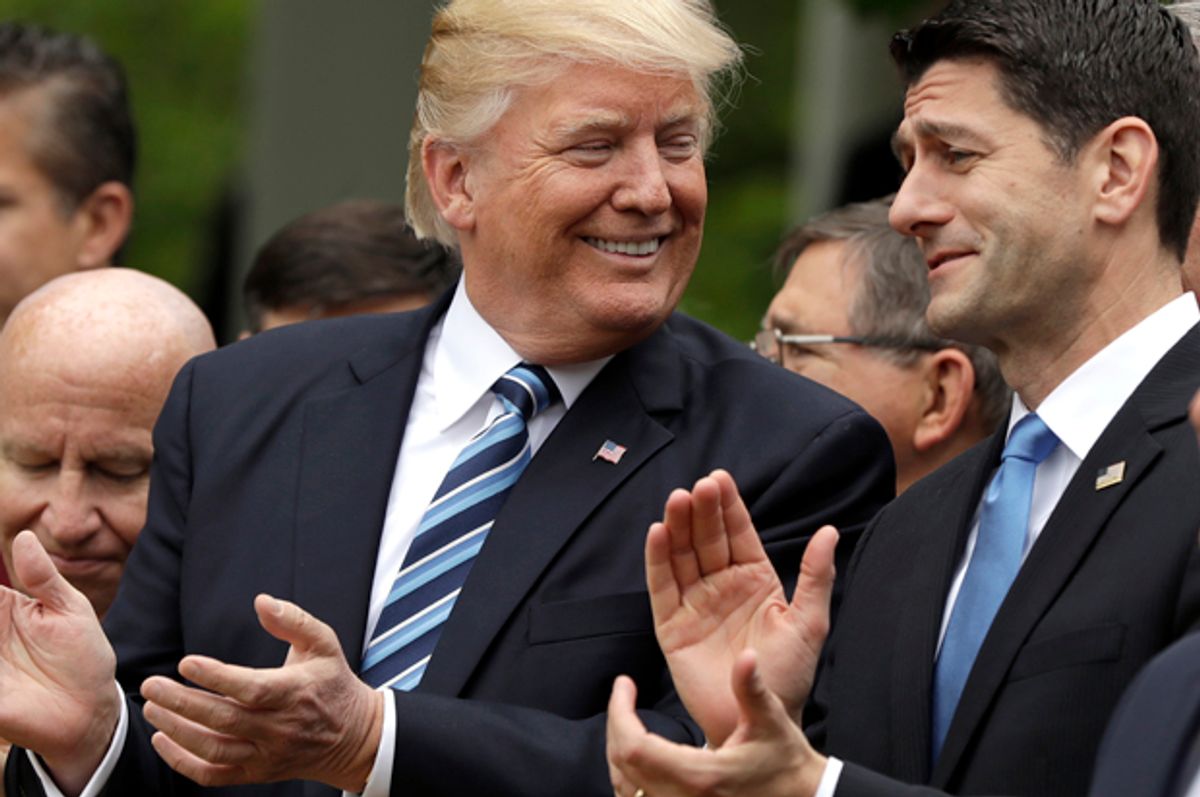 Donald Trump and Paul Ryan in the Rose Garden, after the House pushed through a health care bill. (AP/Evan Vucci)
--

House Republicans voted to repeal the Affordable Care Act on Thursday, despite this staggering detail: According to Roper Center poll aggregation, it’s the least popular major law in decades.

How is it possible that the chamber that’s supposed to be most attuned to the people can be so out of touch? One of the most important reasons is the gerrymander -- especially the lethal version unleashed after the 2010 census.

The key lesson from the repeal vote was this: Despite protests and polls, Republicans believed they were in greater political jeopardy if they failed to repeal Obamacare. When congressional and state legislative districts were redrawn after 2010, as they are every 10 years, Republicans seized the upper hand and used Big Data and sophisticated map-making technology to lock in their gains. The result? Republicans fear losing their extreme base more than anything else.

Democrats are determined to make Republicans pay a steep price in 2018. But can they? The decay within our democracy goes deep, and the power behind these lines is staggering. Democrats will need to garner at least 55 percent of the total vote for Congress in 2018 to have even a 50/50 chance of taking the chamber. That’s no easy task.

It means that 2018 will now present an all-important test: If Democrats are able to win a majority of votes, will they actually come away with power at any level of our government? That we even have to ask such a question -- let alone that the answer is unclear -- should be frightening enough.

It was an exceptionally rare example of the party with the most votes not getting the most seats -- but it was no fluke. Far from it. It was part of a plan called the Redistricting Majority Project, or REDMAP for short, which is exactly what it created. Republicans set out in 2010 to take control of key legislative chambers in states like Michigan, Ohio, Wisconsin, Pennsylvania and North Carolina, all with an eye toward locking Democrats out of the room and taking complete control of drawing all-important district lines.

Locking Democrats out of the room is literally what Republicans did in Ohio -- where GOP officials moved redistricting headquarters out of the state capitol and into a suite at the Doubletree dubbed the Bunker -- and in Wisconsin, where operatives set up at a Madison law firm and claimed that attorney-client privilege allowed them to shroud the process in secrecy.

Here’s how well it worked: There are 435 House districts. In 2011, Republicans were able to draw 193 of them by themselves. Democrats? Just 44. That’s nearly a five-to-one advantage.

Princeton professor Sam Wang has shown that Republicans likely gained at least 12 seats due to gerrymandering in 2012. Look how the election played out in just a handful of blue states and swing states on these new maps:

How do we know this is gerrymandering, and not a natural "sorting," in which Democrats move to the cities while Republicans distributed more effectively throughout suburbs and rural areas? To cite Pennsylvania as an example, in 2008 Democrats won the aggregate U.S. House vote by a similar margin as they did in 2012. With the district lines then in use, that translated into 12 of the 19 seats.

This is one important reason why National Journal can find 137 "centrists" in Congress in 2002, but only four in 2012 -- and how Nate Silver can identify the number of swing districts declining from 103 to 35 between 1992 and 2012. The number of landslide districts, meanwhile, exploded from 123 to 242. Harvard political scientist Theda Skocpol has dubbed this the “Koch effect,” and written that the members elected since 2010 have pushed the House to take “the biggest leap to the far right in recorded quantitative measurements of the kind that political scientists use to track legislators’ positions.”

Not only do members from safe seats behave differently,  but the safe seats help elect a new breed of politicians. Perhaps the best example of this comes from North Carolina, where, before 2012, the 11th district -- centered on the liberal college town of Asheville and surrounded by more conservative mountain towns -- was represented by a conservative Democrat, Heath Shuler. When the Republicans captured complete control of redistricting in North Carolina, however, they split Asheville into two districts, scattered the Democratic voters, and turned a competitive seat into a safe Republican stronghold.

The new representative? It’s Mark Meadows, chair of the House Freedom Caucus. Meadows pushed House Republicans toward the October 2013 government shutdown, and filed the parliamentary motion that ultimately forced the resignation of Speaker John Boehner. Now he leads a crucial bloc of firebrands -- many of them, like himself, elected on these maps -- which prevented a previous Obamacare repeal effort that they didn’t think went far enough to dismantle the Essential Health Benefits.

It remains to be seen what kind of AHCA bill can pass the U.S. Senate. But the crucial deal that brought the Freedom Caucus back on board, and ultimately attracted a handful of Republican moderates, would allow individual states to request a waiver from requiring the 10 Essential Health Benefits, and establish a high-risk pool for those with pre-existing conditions who found themselves priced out of other policies.

How will states decide? Governors are likely to have the final word -- but state legislatures will play a key role, and they are in many ways more gerrymandered than the U.S. House. In Michigan, for example, more people have voted for Democratic state house candidates in each of the last three elections. Republicans have kept control each time. Ohio, North Carolina, Virginia, Pennsylvania and Wisconsin are just a few of the other states where Republicans often maintain supermajorities despite fewer votes. There’s little reason to believe that those chambers will come to any different result than the House of Representatives did this week.