Is Trump really building a fascist regime — or is it all just showmanship? Either way the threat to democracy is real

The president's inner circle may yearn for totalitarian rule — but for Trump, it's all narcissistic play-acting 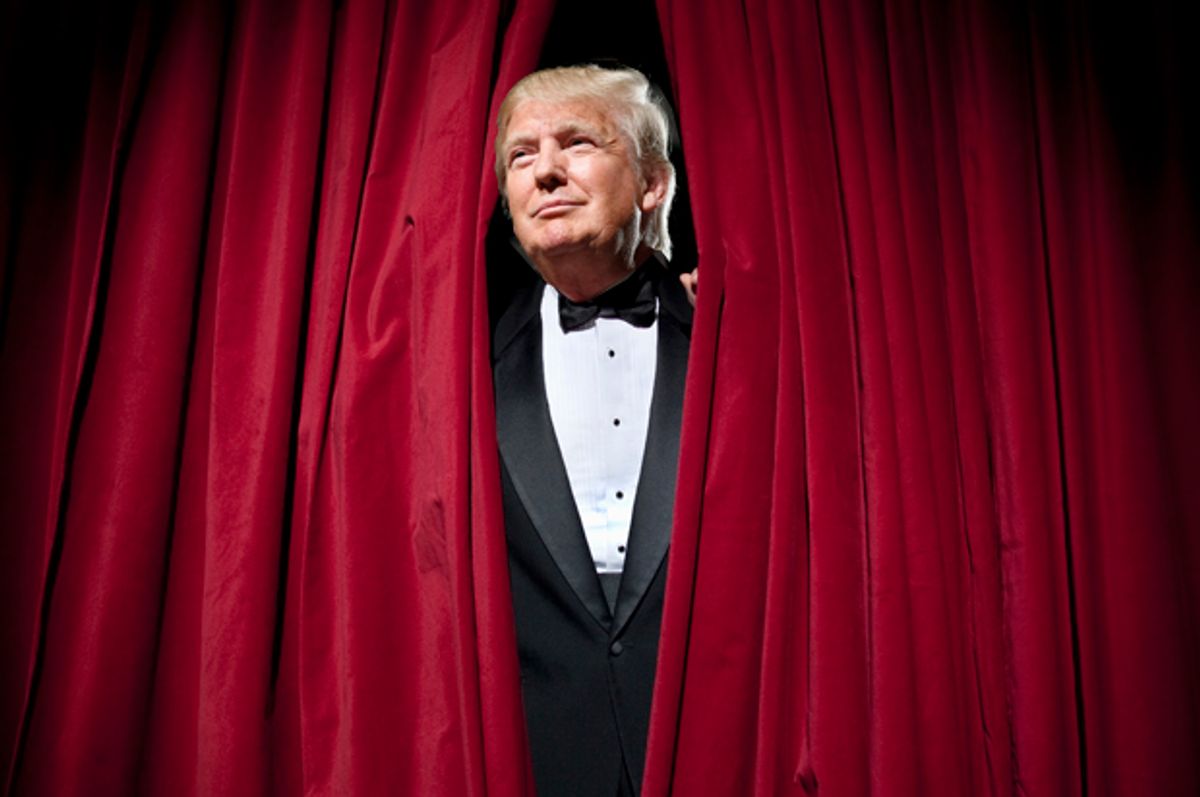 Over the past few weeks, I’ve been trying to build up a framework that might, however provisionally, help us make sense of the strange political and cultural condition of the Western world at this point in the 21st century. That’s far too ambitious a goal amid a situation of perpetual turmoil, of course. If there’s one thing we know about history, it’s that hardly anyone understands what’s going on when they’re in the middle of it — and if there’s one thing we know about the current state of the world, it’s that whenever anyone offers up a confident, coherent and carefully wrought analysis, fate is about to make them look ridiculous.

Among other things, this conceptual framework may shed some light on an interesting debate that has broken out on the left: Exactly what kind of terrible is the Donald Trump presidency? Is Trump a fascist dictator-in-waiting who plans to undo American democracy, overtly or otherwise, for good and all? Or is he just a showman, a guy who plays an authoritarian strongman on TV — an empty simulacrum of a lost 1940s original, concocted to titillate a nation of dazed media consumers who have lost contact with objective reality? It was a somewhat similar situation — the relationship between Louis Napoleon (aka Napoleon III) and his more famous and successful uncle — that called forth Karl Marx’s famous dictum that history tends to repeat itself, first as tragedy and then as farce.

I’m always tempted, when faced with this kind of dichotomy, to suggest that both things can be true. It could end up that way: Trump could begin his accidental presidency as a reality-show character who escaped containment, and end up as the figurehead leader of a totalitarian regime. But in terms of evaluating where we are right now, we have to choose. In a recent interview that went viral, Yale historian Timothy Snyder told my Salon colleague Chauncey DeVega that “it’s pretty much inevitable” the Trump administration will try to stage a Reichstag fire-type crisis and seize full control of the government — effectively, stage a coup.

Brooklyn College political science professor Corey Robin responded with an op-ed in the Guardian arguing that Trump is in no position to stage a coup, because he has nobody working for him. The president “has failed to fill 85% of the positions in the executive branch that he needs to fill in order to run the government to his specifications,” Robin writes, including numerous key jobs at the Justice Department, Homeland Security and the Pentagon where any proper fascist leader would want to have his own people in place.

“If Trump were actually serious about consolidating his power,” Robin quips, “he might start by, oh, I don’t know, consolidating his power.” In many cases, the posts Trump hasn’t filled aren’t empty, Robin adds — they’re still staffed with Barack Obama’s appointees, who are presumably still enforcing all those regulations Trump has vowed to eliminate.

I think there’s a way to square this peculiar circle. Intentionally or otherwise — and in this case it’s probably an accident — Trump looks like an authoritarian demagogue who will run roughshod over the political establishment and do things his way, but in practice is governing almost exactly like a standard-issue right-wing Republican, with a little extra racism to spice up the stew. Indeed, Trump has gotten rolled by GOP orthodoxy so many times in his first 100 days — on NATO, on NAFTA, on China, on his supposed border wall — that, as press critic Jay Rosen observes in another Salon interview this weekend, it’s meaningless to talk about his “policies” because he doesn’t have any.

Trump actually has something in common, in this context, with Emmanuel Macron, the French president-in-waiting who has been presented in the media as the rational, liberal anti-Trump. Macron was essentially invented by the French establishment as a way of halting the rise of Marine Le Pen and the National Front; he’s an independent running as an outsider, but represents the continuation of politics as usual at almost exactly the middle point between France’s long-dominant center-left and center-right parties. Both Macron and Trump are Potemkin candidates, in other words, faux-outsiders built to channel popular discontent.

Here’s the central premise of my framework: Western-style parliamentary or representative democracy, which appeared to be on the way to conquering the world in the 1990s, is in big trouble. Participation rates and partisan identification are in steep decline throughout the Western world; a large proportion of the public is dissatisfied with the results and believes that the machinery of democracy serves someone else’s interests but not theirs. Populism, a maddeningly imprecise but necessary term, is on the rise on both the right and the left, amid signs that supposedly discredited ideologies of the 20th century — notably socialism and fascism — may not have been so firmly nailed into their coffins after all.

There isn’t much agreement on the nature of the crisis of democracy or its dimensions — are we talking terminal decline, or a troubling but temporary downturn? In fact, there’s no widespread agreement that there is a crisis of democracy: The Democratic Party as it currently stands, for instance, is pretty much predicated on the idea that there isn’t, and that sanity and competence will ultimately win out. (Let’s not get lost in the weeds arguing about whether that party in fact represents those admirable qualities.)

Things get even murkier when we get to my next hypothesis, the idea that we are in a new Age of Revolution that in some ways echoes the earlier ones in the middle of the 19th century and just after World War I, but lacks most of the obvious signifiers that would make it look like one. I will freely admit that this has to be phrased so conditionally it becomes almost meaningless: We might be in an age of revolution, or in a situation of widespread chaos and disorder on the cusp of one. It is as least as likely that the elite groups who hold most of the power in the Western political and economic sphere — which is, let’s say it right here, really an oligarchic society with some elements of democracy — will find a way to defuse and repackage the revolutionary energy of the moment as that we will see overt and visible change to our major institutions, still less the overthrow or remaking of nation-states.

You see what I did there, I’m guessing: Trump (and Macron too) might be understood as examples of that defusing and repackaging. Indeed, it’s possible we will see major structural changes — and that we have already seen them, as the oligarchic castes have consolidated their wealth and power over the past 50 years or so — but we may have difficulty identifying them for what they are.

Issues that are often presented as disconnected, from worsening income inequality to the power of money in politics to the neoliberal agenda of globalized free trade, deregulation and fiscal austerity, are all aspects of this oligarchic consolidation of power, and could be considered as revolutionary class warfare in slow motion, carried out under the banner of democracy. Bernie Sanders had the temerity to run for president on a platform that involved pointing all this out, which seemed like a naive or foolhardy endeavor but came far closer to success than anyone expected (including him) and has provoked an internal crisis of identity and ideology on the American left.

In case you haven’t noticed, Sanders was not elected president. That other guy was, who might be a revolutionary or a wannabe revolutionary but who also, more and more plausibly, might just be faking it. Hillary Clinton had the decency not to point the finger at Sanders during her first public comments about the November election, but you know she thinks he’s a little bit to blame — not as much as James Comey or Vladimir Putin, maybe — for what happened.

So what did happen exactly? Did we (or rather “we”) really elect an incipient or aspiring fascist dictator, or did an especially obnoxious version of the class clown just get hit by lightning, in the flukiest fluke election of all time? Is it a distinction without a difference, since what really matters are the results on the ground, which have been uniformly ghastly so far?

My answer to that latter question is yes and no. Donald Trump’s conscious intentions don’t much matter, and are profoundly silly: He’s a vainglorious idiot who appears to suffer from a severe personality disorder (not meant as a clinical diagnosis, blah blah blah). He has emotional reference points and impressions of the world — most of them apparently drawn from the New York tabloids, circa 1979 — but no ideological or political convictions worthy of the name. There are certainly people in Trump’s orbit, principally Steve Bannon and Jeff Sessions, who might recoil in mock horror at being called fascists, but whose agenda pretty much fits the bill.

That the Trump administration presents a real and present danger to what is left of our democracy, to the rule of law and to the Constitution strikes me as beyond dispute. Whether that means Trump will try to stage a coup, seize permanent power and cancel elections — or is remotely capable of doing so — strikes me as an entirely different question. Corey Robin is right to observe that the one thing every totalitarian ruler needs is control of the state apparatus, and Donald Trump displays no aptitude for that whatsoever. He seems out of his depth when it comes to managing his inner circle of advisers in and around the West Wing; as for the larger bureaucracy of the executive branch, the ruin and dysfunction are already legendary.

Does that mean the whole thing is just showmanship, that no one will actually get hurt and that at some point (I know liberals still fantasize about this) Trump will just get bored and walk away and his entire administration will implode and be quickly forgotten? I think we’re past that point, and I think I’m reverting to “both things can be true.” The fact that Donald Trump is really bad at being a tyrant is itself dangerous, and the fact that he has allowed himself to be turned into a puppet for the most retrograde elements of the Republican Party adds some extra instability to the danger.

Trump is entirely likely to rebel against his puppet-masters and to try to live up to the grotesque fantasies of his most devoted followers, in the vain hope that with more power he can compel everyone to love him. He will fail because he’s no good at governing, no good at consolidating or wielding power, no good at making deals and no good at anything, really, except playing the role of Donald Trump, celebrity businessman and celebrity president. If he tries to play celebrity dictator it might well look farcical, to borrow Marx’s formulation, if viewed from another planet. It won’t look that way here.