Opiate for the Masses: "Game of Thrones" is the latest series to feed our spinoff habit

Waning shows extend their lives with sequels and prequels. Dead ones are born anew. Welcome to TV's undying lands 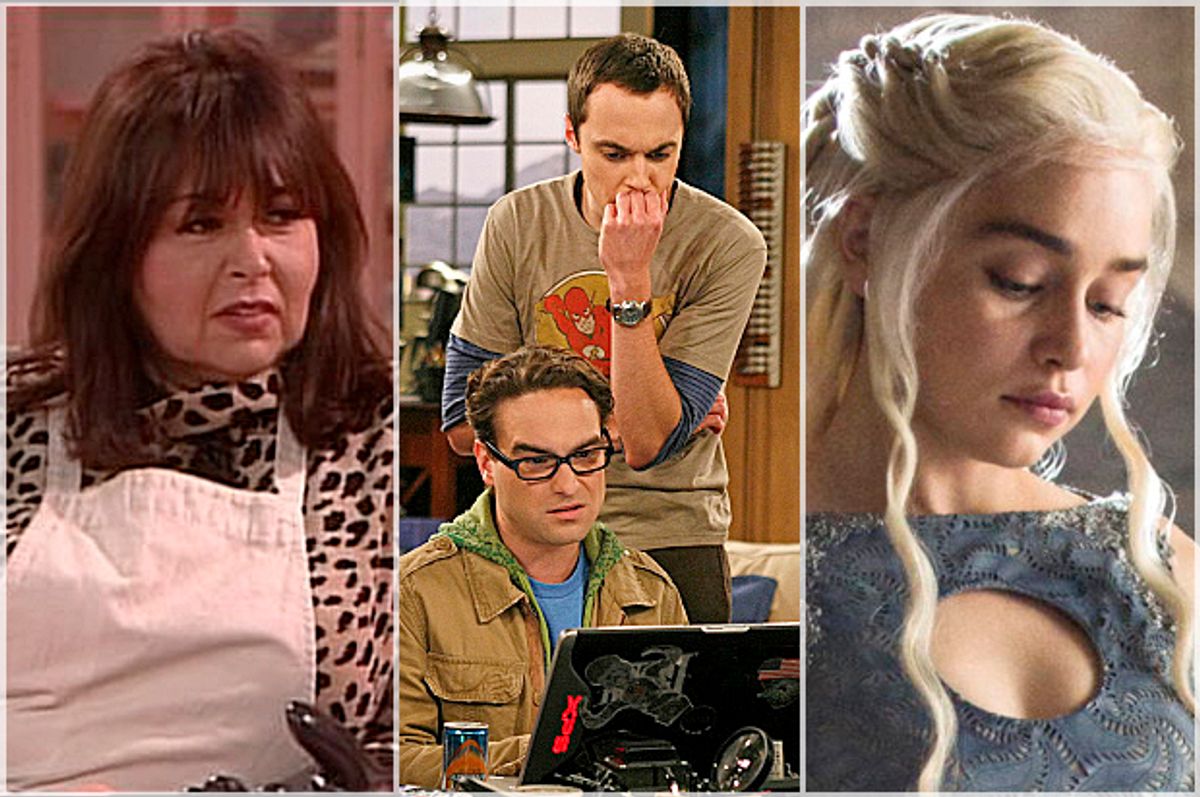 What a terrific time to be a television viewer who doesn’t believe in letting go.

Oh sure, there will always be cancellations and series finales to contend with; we’re smack in the middle of Finaleville right now. Are you waving goodbye to your favorites for the summer, or forever? Unless a deal is already in place, we won’t know until the week of May 15. That’s when ABC, NBC, CBS, Fox and The CW will reveal their 2017-2018 lineups to advertisers and let the rest of us know which bubble series have been canceled.

Have hope, prime time addicts. Should your current prime time dependency suddenly disappear, know that dead doesn’t necessarily stay dead forever, or even for long these days. For ours is the glorious era of reboots, revivals and spinoffs!

Why, just a few days ago “Game of Thrones” fans received the comforting news that HBO is considering four possible spinoffs. The new series could be based on George R.R. Martin’s novellas that are connected to “A Song of Ice and Fire” and featuring the adventures of Dunk and Egg. Perhaps they’ll be inspired by the events surrounding Robert’s Rebellion, the civil war that led to the fall of the Targaryen dynasty. Nobody knows!

The only certainty is that HBO has tapped screenwriters Jane Goldman (“Miss Peregrine’s Home for Peculiar Children”), Brian Helgeland (“L.A. Confidential”), Carly Wray (“Mad Men,” “The Leftovers”) and Max Borenstein (“Kong: Skull Island”) to develop . . . something. That’s better than the endless span of nothing we’d otherwise be left with after the shorter eighth and final season of "Game of Thrones" airs in 2018.

Not long before that came news that an eight-episode revival of “Roseanne” is being shopped around with the original cast in place. This development grew out of the success of a filmed bit that aired as part of John Goodman’s visit to an episode of CBS’ daytime series “The Talk,” co-hosted and executive produced by his former TV daughter Sara Gilbert.

These are merely the latest in a string of announced spinoffs and revivals, including CBS’ “Young Sheldon,” a single-camera spinoff to “The Big Bang Theory” that looks at Sheldon Cooper’s life as a 9-year-old high school student; and the 12-episode resurrection of NBC’s “Will & Grace,” confirmed on Friday, via a poster that went viral, as joining the fall schedule.

All this may lead a reasonable person to have a few questions, four of which I’ll do my best to answer here.

Why is this happening?

Concerning revivals, the easy answer is nostalgia. Exhibit A: “Twin Peaks.” A new season premieres May 21 on Showtime, 26 years after ABC originally canceled the drama. People have been losing their minds since David Lynch and the cable channel announced the reboot was happening way back in — it’s been a while.

Anyway, most people cherish the first season of “Twin Peaks” (and maybe the theatrical release of “Twin Peaks: Fire Walk with Me") but folks become amnesiac when its inferior, nearly unwatchable second season is mentioned. Be that as it may, Gen Xers are incredibly excited to see the new episodes because they remember how deeply enthralled they were over season 1 oh so many years ago.

And in this age of peak TV, recognizable titles have greater odds at succeeding than complete newbies. As the 2016-2017 season nears the finish line, two of the more successful hour-long freshman dramas on broadcast are CBS’ revival of “MacGyver” and Fox’s TV series version of “Lethal Weapon.”

As I wrote prior to this season’s kickoff, a survey conducted by NBCUniversal revealed that 54 percent of viewers surveyed said they won’t start watching a series if they don’t have access to prior episodes. That makes it tough for a new series to rise above the din — unless that new series is an extension or a reboot of a classic hit.

“Roseanne” ran for nine seasons on ABC and stands as one of the network’s greatest contributions to the medium, earning multiple Emmy nominations for various cast members, one Emmy for its star Roseanne Barr and three for co-star Laurie Metcalf. Given the giddy reaction to that viral video and the fact that the key cast members are open to the idea, it was fairly easy to see why networks would want to take advantage of the stars aligning, figuratively and literally.

The proliferation of spinoffs takes the audience's familiarity and affection for a title one step further, using an established hit as a foundation upon which a lucrative franchise can be built.

Creating spinoffs of “Game of Thrones” is a safe wager: Expanding the title’s library also makes solid business sense to HBO, given that Martin’s tales have an established history that the writers can take in any number of directions.

“Young Sheldon” also has a fair chance of coming into its own once “The Big Bang Theory” leaves the air, especially given the seeds of Sheldon Cooper’s backstory sprinkled throughout the “Big Bang” storyline over the last decade.

Not all spinoffs and revivals are welcomed with open arms. Most aren’t, in fact. Look at “Prison Break” and “24.” Both those series received their burials years ago only to pop up alive and kicking in various guises this season. “The X-Files,” a prime-time staple from 1993 to 2002, was resurrected last year to mixed reviews and strong initial ratings that fizzled out over subsequent weeks, neither of which stopped Fox from recently green-lighting 10 new episodes that are set to air next year.

If at first a series doesn’t succeed, cancel. Then try, and try again. This is the TV industry’s current mantra.

Aren’t most spinoffs doomed to fail?

Presumably most people know the answer to this — for every “Friends,” there is a “Joey.”

“Better Call Saul,” however, is one of the finest dramas on the schedule right now, possibly rivaling its predecessor “Breaking Bad” in terms of quality. Critics are also singing the praises of “The Good Fight,” the sequel to “The Good Wife” currently airing (and still being discovered) on CBS All Access, the broadcast network’s streaming service and the future home of the highly anticipated “Star Trek: Discovery.”

Then again, there is a real possibility that the “Game of Thrones” spinoff could poop the bed. Current “Game of Thrones” executive producers D.B. Weiss and David Benioff will be involved in the spinoff’s development, although Weiss and Benioff won’t be writing for any of them. (Martin, meanwhile, is working with Goldman and Wray on their treatments.) Recalling the unreasonable patience that audiences grant HBO’s programs, whatever storyline HBO selects will get respectable tuning in regardless of its execution. The same could be true of FX’s planned “Sons of Anarchy” spinoff “Mayans MC.”

“Young Sheldon,” in contrast, has the dual pressure of standing out as a single-camera comedy in a lineup dominated by successful multi-camera half-hour shows, and performing well enough to meet CBS’ high bar for ratings success. The network has canceled series with respectably sized audiences that would be considered successful performers on other networks. Then again, it’s also a show created by Chuck Lorre and Steven Molaro, two of the most powerful producers in television. If it’s not an atrocity, this kid will stay in the picture.

Are any of these revivals good ideas?

“Roseanne” probably is, especially at a time when networks are scrambling to find content that appeals to working-class Americans. Interestingly enough Netflix has been the forerunner with regard to revivals, bringing back new versions of “Full House” and “Gilmore Girls,” extending the life of “Arrested Development” and rebooting “One Day at a Time” to reflect the working-class experience as lived by a first-generation Cuban-American family.

“One Day” is a terrific example of how a story first told in the late 1970s — this one produced by the great Norman Lear — can be reborn in a way that poignantly portrays the lives and struggles of today’s audience.

Some concepts are timeless: The CW’s expected revamp of “Dynasty” may look like an “Empire” rip-off to millennials when, in truth, the vicious women of the Carrington and Colby clans begat the likes of Cookie. The same might be said of TNT’s resurrection of “Tales from the Crypt.”

OK, but which are probably terrible ideas?

NBC’s revival of “Will & Grace” is raising a few eyebrows, as viewers rightly wonder whether that '90s comedy's stale portrayals of LGBT characters can be convincingly updated. Ditto for Netflix’s announced revival of the '90s hit “Queer Eye for the Straight Guy.”

Also, that “Tales from the Crypt” 10-episode reboot due later this year could go either way. M. Night Shyamalan is executive producing it and the series is introducing a “newly reinvented” Crypt Keeper.

Who knows? All of these revivals, prequels, sequels and side stories could be stupendous. History speaks against the likelihood of this, reminding me instead of a quote from one of horror’s sharpest minds, Stephen King: “Sometimes, dead is better.”