The Republican Party is sociopathic: If you didn't know that already, the health care bill should make it clear

Republicans have long since left normal politics behind and veered into irresponsible, sadistic misbehavior 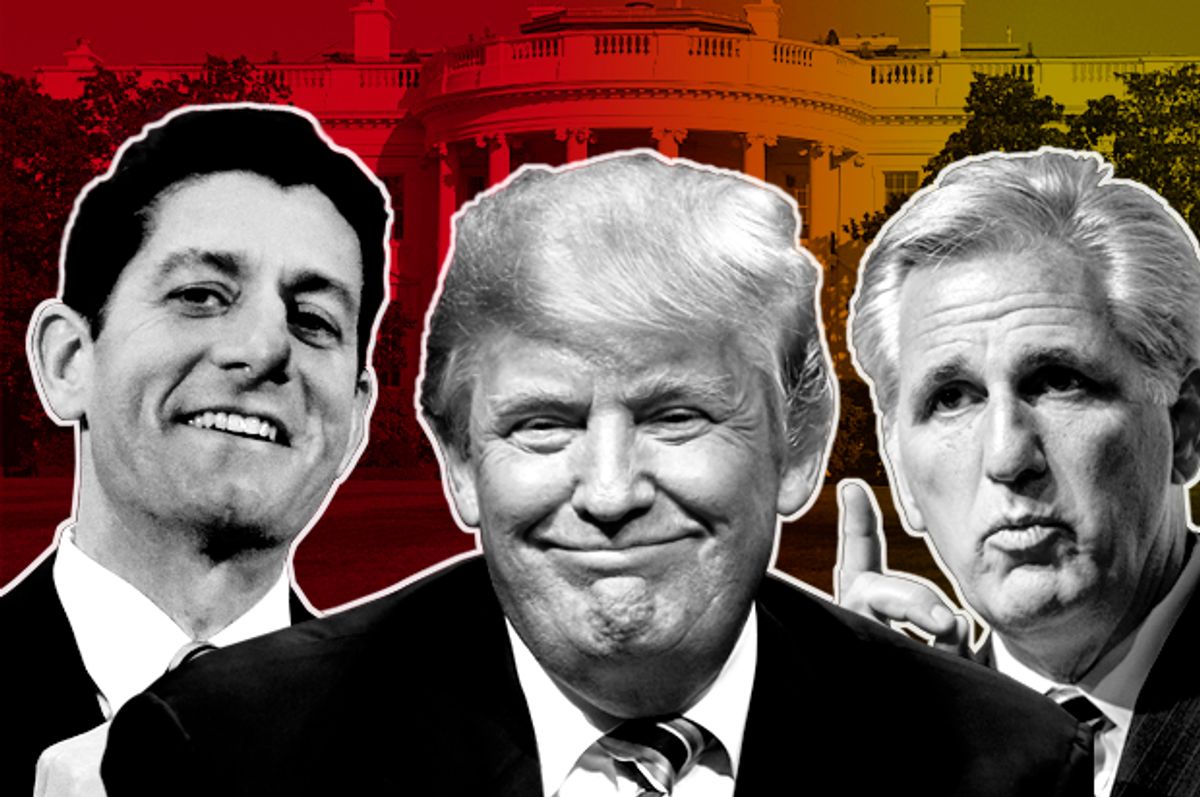 On Thursday, Republicans in the House of Representatives voted to repeal the Affordable Care Act in order to give the richest Americans and corporations billions of dollars. To accomplish this, Republicans will deny tens of millions of Americans who have chronic and preexisting health problems access to affordable medical care. The Republican Party's plan to punish the sick and to kill the "useless eaters" has expanded its targets to include women who have been victims of sexual assault or domestic violence or suffered from post-partum depression. The Republican plan will also hurt disabled people, senior citizens, new mothers, pregnant women, children in special education programs and babies. It is estimated that at least 43,000 Americans a year will die if the Affordable Care Act is repealed.

This is quite literally the politics of life and death. Republicans in Congress have chosen to place their fingers on the scale in favor of the latter.

After finding "courage" prior to their vote from watching the movie "Rocky" and supposedly drawing inspiration from Gen. George Patton, these Republicans -- a group largely comprised of rich, old white men -- basked in the glow of their "success" while they drank beer and took photos with President Donald Trump in the Rose Garden. In all, it was a macabre and perverse bacchanal of plutocratic greed and civic irresponsibility.

The vote to repeal the Affordable Care Act was also a reminder of two very frightening and disturbing truths that most of the mainstream corporate news media will ignore.

Conservatives lack empathy for their fellow human beings. The Republican Party's hostility to the poor, the working class, the elderly, immigrants, Muslims, refugees, the homeless, the vulnerable, gays and lesbians, children, people of color -- and yes, the sick -- is not an aberration or deviation from their voters' basic desires. For those not of the right-wing tribe, a decision to strip away health care from millions of people does not make rational political sense. But for those inside the right-wing echo chamber, such a decision speaks to basic psychological and social impulses: It reinforces the demarcations separating "us" and "them," the deserving and the undeserving, the righteous and the sinful.

In 2010, Ravi Iyer examined data that demonstrated the divergent role of empathy for conservatives and liberals. He observed:

The more interested in politics a conservative is, the lower his (or her) level of empathy. Liberals move in the opposite direction: the more interested in politics they are, the more empathetic. ... In the 2010 election, 42 percent of voters identified themselves as conservative; 38 percent said they were moderate; and 20 percent said they were liberal. If that division obtains in 2012 and beyond, the proportion of conservative to liberal voters in the electorate should give liberals pause, especially insofar as they expect elected officials to propose and pass legislation the underlying purpose of which is to help those most in need.

Iyer's observations would prove prophetic. In the 2016 presidential election, the empathy divide motivated millions of white conservatives and right-leaning independents to support Donald Trump: The opportunity to punish the Other paid a psychological wage, even if Trump's actual policies would economically hurt the "white working class" voters who installed him in the White House -- with the help of Russian President Vladimir Putin.

The Republican Party is sociopathic. As detailed by the International Statistical Classification of Diseases and Related Health Problems, exhibiting three or more of the following traits is sufficient for the diagnosis of sociopathy:

The Diagnostic and Statistical Manual of Mental Disorders adds these two qualifiers:

The Republican Party's policies on health care, the economy, the social safety net, law enforcement and racial issues, and its attitudes toward women, gays and lesbians, and other vulnerable and marginalized groups fit many of these criteria. In their reactionary, revanchist and destructive approach to political community and the commons, modern American conservatives in general also exhibit many sociopathic traits.

Organizations and communities elevate to positions of power those individuals who best embody their values. So it is no coincidence that the Republican Party's current leader, Donald Trump, exemplifies many of the traits common to sociopaths.

A lack of empathy and an embrace of sociopathy has helped to make the Republican Party in its current form largely exempt from the rules governing "normal politics." The Republican Party now represents a form of right-wing politics that has more in common with extreme religious fundamentalism than it does with post-Enlightenment rationality. In combination with a compliant American news media, gerrymandering, voter suppression, a highly effective propaganda machine, manipulation of the rules governing procedures in the House and the Senate, and a large conservative base that has been conditioned toward compliance, lies and authoritarianism, the Republican Party will likely maintain control of the United States on a local and state level for the foreseeable future.

The pundit and chattering classes want to believe that the "adults" in the U.S. Senate will stop Donald Trump and the Republican Party's latest effort to destroy the Affordable Care Act. They also think that Trump's voters will turn on him once his policies begin to negatively impact them in material and tangible ways.

These so-called experts have little to no credibility: They are the same people who believed that Trump would never be elected president. These supposedly astute observers of the American scene misunderstand this cultural moment because they presume reason and human decency where there is only madness, greed, bigotry, rage, racism, sexism and nihilism. To acknowledge these matters is not to surrender to them. It is necessary, if good and decent human beings who believe in the best of America are to equip themselves to fight back and win.