What Ivanka Trump doesn't know will hurt us all

I read “Women Who Work” so you don’t have to. Ivanka's “successful businesswoman” reputation is kind of a sham 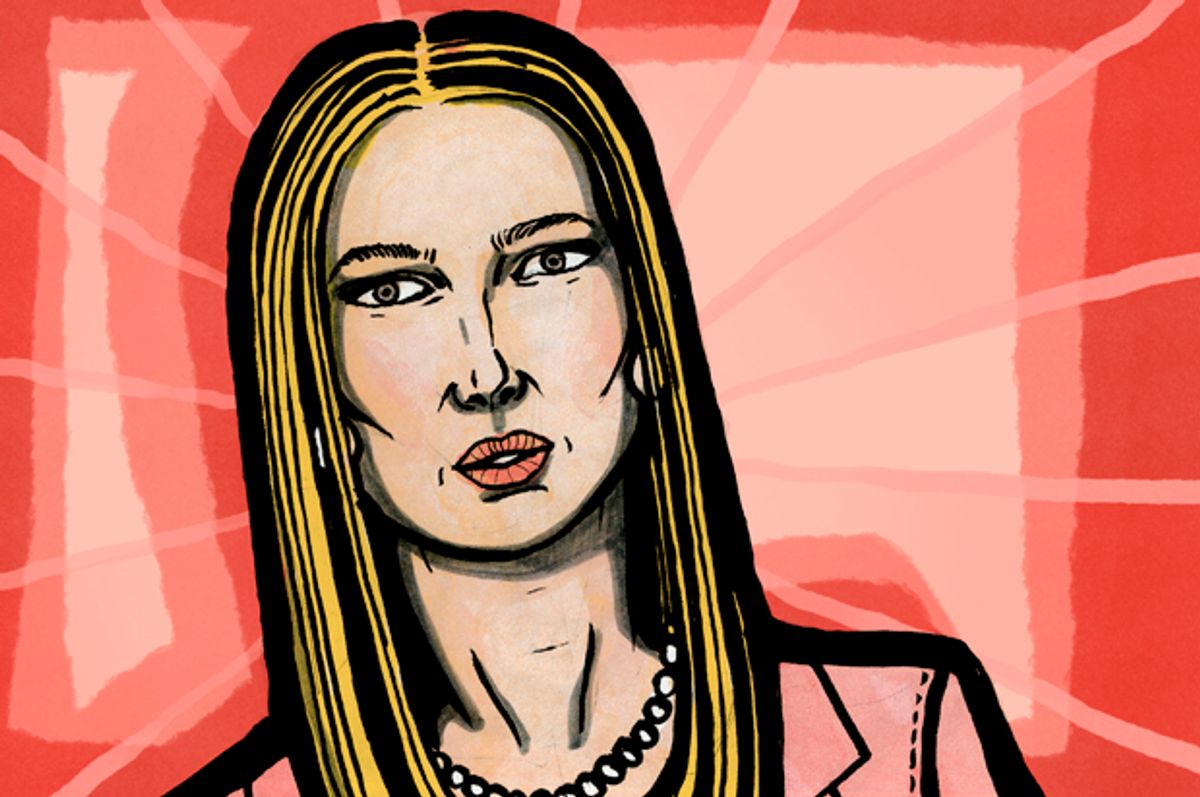 Ivanka Trump’s new book “Women Who Work” is not, as you may have already guessed or read, particularly useful, even compared to other bland corporate tactical manuals. If you are a woman who works — or know one with a graduation or a promotion or a birthday coming up — save your money. The Trump family’s rapacious worldview is in its full glory in this clip job of a so-called monograph; Ivanka (or whoever “architected” this sugar-, fat- and gluten-free life manual) takes the subhead, “Rewriting the Rules for Success,” to an absurdly literal level. The book is not written so much as it is aggregated, borrowed so heavily from certain individual sources that she ought to owe royalties to Sheryl Sandberg and the estate of Stephen Covey, not that they’re any more likely to collect now that her office is in the West Wing instead of Trump Tower. What else is the intellectual work of others but “content” for “Ivanka” to “curate” (“wordsmith,” even!) for her own profit?

Ivanka is not an original thinker; this is not news. So it comes as little surprise that she is not a gifted — or even passably average for her genre — writer, either. In her NPR review, Annalisa Quinn aptly likens reading the book to “eating scented cotton balls,” and I would thank the American culture to immediately stop placing any automatic, unqualified premium value on prestigious prep school and Ivy League educations, as every podunk public school graduate I know has a better grasp of Toni Morrison and Charlotte Perkins Gilman than Ivanka Trump does, despite her expensive degrees.

A more fitting label for this perfect-bound Pinterest board would be “Women Who Work for Me, Ivanka Trump,” as they appear to be the only relevant audience. The focus is mainly on what has worked for her in her career, which is as idiosyncratic as her personal life has been, and what kinds of people she is drawn to when she builds a team. So if you work for Ivanka Trump but still don’t understand her alien ways, or some day want to sell some harmless clutches to whichever mid-range department store will still do business with you, this book is likely quite useful. Spout back all of the platitudes about building a “one-life corporate culture,” show up with “DREAM and DO” doodled on your file folder, and you’re in.

But for all of her nonsense about the “quiet, deliberate, and essential” so-called “workplace revolution” she claims to be launching, Ivanka is not up-ending what she calls “the old-fashioned ‘work warrior’ mentality” that demands long hours at the office as the only proof that employees are sufficiently dedicated to making money for their corporate overlords. What she’s advocating — Millennial Pinkified, self-actualized personal contentment wrapped around a tireless pitbull level of commitment to achieving corporate goals — is even more sinister. In her world, #WomenWhoWork and depart the office at 6 p.m. are still “leaving early” — the so-called Trump administration advocate for working parents obviously has no idea what time many daycares close — and they’re also expected to be back on at night and on the weekends, grinding away after they fulfill their Ivanka-modeled 20 scheduled minutes of quality time with their children or partners at home.

Ivanka's obliviousness at her own privilege, despite lip service to acknowledging her many blessings, continues to dazzle. She holds up her Shabbat time with her family — sundown Friday to sundown Saturday — as an example of aspirational restorative time, and no doubt it is. Show me a couple that works the kinds of hours Ivanka and Jared do — even those without kids — that doesn’t have to use some of their non-working hours to run necessary errands or tidy up or get caught up on something other than leisure time, and I’ll show you a family wealthy enough to pay a full-time domestic staff to handle everything for them that isn’t personal exercise, family fun time and mandatory biweekly date nights. (Bullet journal note to self: An app to disrupt mandatory biweekly date nights? Siri but for sex?)

In Ivanka’s world, you can either “[turn] on ‘Real Housewives’ and [sit] in front of the TV eating a giant bowl of pasta with a glass of wine” — counterproductive! — or “meditate, soak in the tub, exercise, or take a long walk” at the end of a day to unwind. There’s a third option, too: “I simply turn off my devices, go into my kids’ room, and just watch them sleep.” Only a person who has never wondered if she could get her clean laundry put away before it cycled through to dirty again could offer only these options with a straight face.

Despite her heavy focus on working mothers in this book (though she is careful to always include those who are not parents yet and those who have chosen not to be, because you never leave a potential customer out!), it’s not until page 154 that the words “my nanny” appear, despite the many passages devoted to balancing motherhood with a demanding job. I don’t believe I saw it again until the acknowledgments, in which she thanks not only the nannies, Bridget and Dorothy, who helped raise her and her brothers as her own mother Ivana worked, but also “Liza and Xixi, who are helping me raise my own children, thank you for being a part of our extended family and enabling me to do what I do.” Employing two nannies has to be a cornerstone of the Ivanka Method; burying the full acknowledgment of that literally in the acknowledgments section is beyond disingenuous.

So Ivanka Trump is wealthy and privileged and shameless about pretending her hard work has been the key secret to her success; this is not news. But what this book does highlight is that her “successful businesswoman” image is also a hollow sham.

After graduating from the University of Pennsylvania’s Wharton School of Business in 2004, she worked briefly for another real estate development company, Forest City Enterprises. She nods to this in an anecdote about turning down a job at Vogue, which Anna Wintour offered her personally, because she just loves real estate so much. In 2005, she went to work for her father at the Trump Organization. She stayed with the family business even as she founded her own fashion and lifestyle company, and now she has followed the family business right into the White House. Ivanka glosses over quite deftly in her book that she has spent all of one year, tops, working for someone who is not herself or her father, and it shows.

Take these nuggets of advice about how to “bond with your boss”:

Take a cue from those around you. When your boss shares something that was pivotal early in her career, that’s an opportunity for you to respond in kind.

Ask questions. Inquire about her previous career history; ask her how she got to where she is today.

Think you deserve a promotion? Hoping for more than a cost-of-living raise? Broaching these topics in a setting that’s warmer and more casual than her office will take the pressure off you both; continuing the dialogue in a more formal way at review time will alleviate the need to try to cover everything in one sitting.

In Ivanka’s experience, the boss is either her — this is how to get on her good side — or Donald Trump, her own father, in which case flattering him with questions about his early successes and finding opportunities to remind him of how good she is at her job are the pathways to impressing him.

“Broaching these topics in a setting that’s warmer and more casual than her office will take the pressure off you both” is great advice if your boss is a woman with whom you are also chummy but it is potentially fraught and even lousy advice if a Woman Who Work’s boss is a man, as statistics tell us he is quite likely to be.

This is not to say male bosses and female subordinates can’t break Mike Pence’s retrograde rules with no fear of harassment or gossip — of course they can and do. I personally have been friends with male bosses with no weirdness, innuendo, or actionable offenses, and surely many readers have as well. But to not even connect her advice to the realities of sexism and harassment women continue to face in the workplace and how to deal with them if or when they arise in a book aimed at working women, especially when your father has Fox News blaring in the background 24-7 as a reminder, is laughably naïve. In Ivanka’s world, you just “prove your worth,” and automatically you are paid as much as your male counterparts, or actually you deserve to make more than Eric because you’re two years older, Daddy, and it’s only fair.

“While I believe every woman should thoughtfully architect a life she’ll love and actively work toward achieving her goals," the book states, "we must also be flexible, adaptable, and realistic about the fact that our passions, interests, priorities, and relationships shift.” Nowhere in the book does Ivanka address, for example, what happens when access to affordable health coverage for self-employed female entrepreneurs with pre-existing conditions "shifts" after it proves "flexible" in the eyes of Republican leaders, or how to negotiate a raise or higher project rates to off-set the costs if your insurer decides your pregnancy is a pre-existing condition. (Yes, this book was wordsmithed before the House voted last week to replace the Affordable Care Act, but Ivanka was a key strategist of her father's campaign, which ran on the promise of doing just that.) Of course, forget about advice on how to discreetly schedule several days out of the office for an out-of-town abortion when the only appointment you can get within the legal timeframe is in another state that mandates a counseling appointment and a waiting period, and it's November and you've already used up your vacation days for the year.

I am tired of writing about Ivanka Trump. You may well be tired of reading about her, too. If her father had not won the election with her help, and if Ivanka had then not taken a federal job as an adviser to the president, “Women Who Work” would be just another forgettable remainder table staple a month after graduation season ends. But she is supposed to be the advocate for workplace issues facing women in an administration that has already proven itself to be friendly to forces hostile to us. What Ivanka doesn't know could hurt us all — and this book reveals just how extensive her lack of knowledge and context truly is.