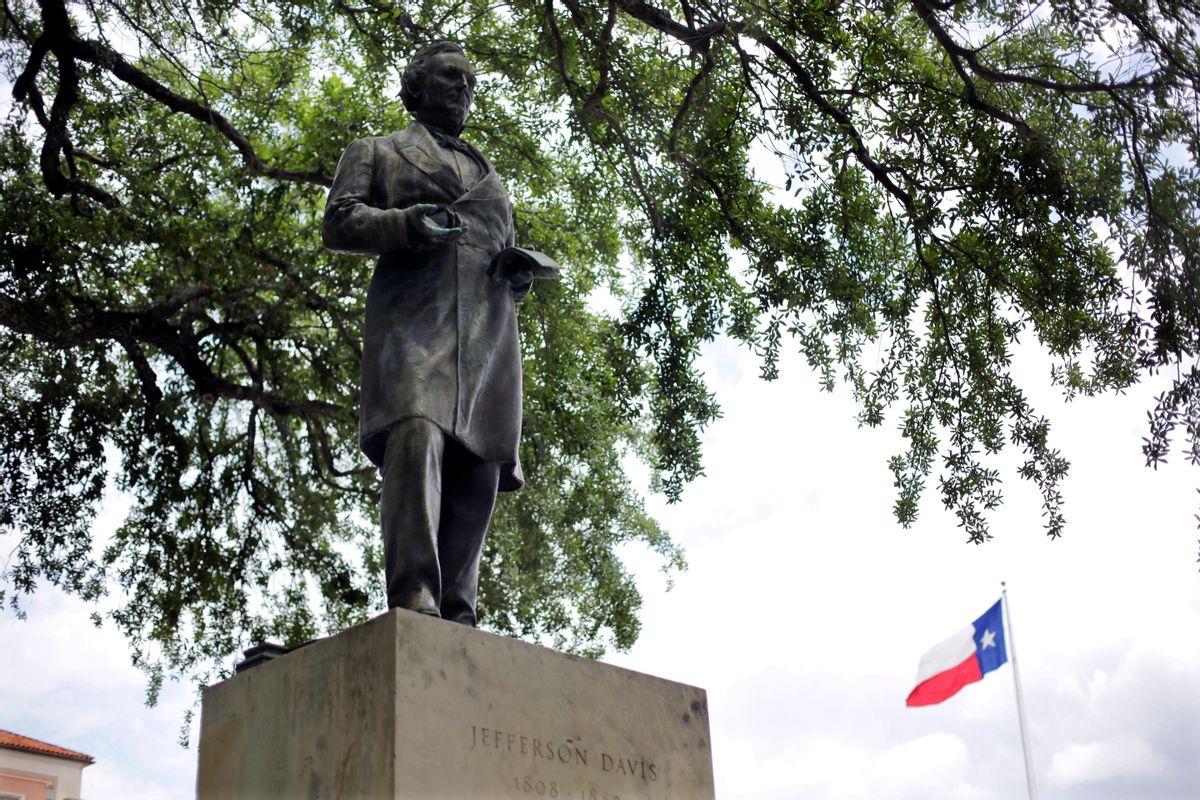 On April 24, New Orleans city employees began the process of removing four Confederate monuments. But there are pitfalls in eliminating memorials to the Confederacy – statues and monuments, along with the buildings, parks, schools and military bases named after Confederate soldiers. Primarily, we risk forgetting the connections of past racial crimes to current racial inequality.

Statues of Confederate soldiers are common in the South in a number of courthouse squares, while streets and parks bear the names of people or events associated with the Confederacy.

In Southampton, Virginia, Black Head Signpost Road is named for the head of a slave executed during the Nat Turner Rebellion. (His head was put on a post along the road as a warning.) Jefferson Davis Memorial Highway, which runs from Florida to California, was named in the 1920s.

The Virginia legislature even continues to pay US$5 per year to cemeteries in the state for every Confederate soldier buried in them. (The money is supposed to help preserve the cemeteries.)

In prior years, some cities and institutions have responded to the concerns of those who view these monuments as distasteful symbols of discrimination and oppression. In little towns throughout the South, from Reidsville, North Carolina to Southampton County, Virginia (scene of the Nat Turner Rebellion), Confederate statues have been moved from courthouse squares and town centers to less prominent places, like cemeteries.

In recent years, the call to remove or rename is getting even louder. In 2015, Senator Mitch McConnell said Kentucky should consider ridding the Kentucky State House of its Jefferson Davis statue; in Memphis, one City Council member drew up an ordinance to remove the statue of Confederate cavalry officer and Klansman Nathan Bedford Forrest from a public park; and Tennessee’s governor has suggested that a bust of Forrest be removed from State Capitol grounds.

Some monuments may be so offensive to the local community that they’ll need to be removed. And certainly, they can serve as rallying points for contemporary white supremacists. Others are particularly poignant reminders of the days of slavery and Jim Crow.

Nathan Bedford Forrest Park, in an African American section of Memphis, was renamed because the City Council thought it was an affront to the local population. In such cases, the redistribution of cultural capital may serve to stop a continuing harm.

This is a decision that should largely be made at the local level. However, the legislatures of four states – South Carolina , Georgia, Mississippi and Tennessee – have passed Heritage Protection Acts that prohibit the removal of Confederate monuments from public property (or renaming of public buildings).

This movement started in South Carolina in 2000, and the statues were pushed by supporters of Confederate heritage.

A case for preservation

Clearly, there’s a lot of work to be done if we’re going to completely wipe out all traces of names and structures that honor the Confederacy.

However, while I’m no supporter of the Confederacy, there are several reasons not to remove monuments or rename buildings.

As an aside: Confederate flags are entirely different. New flags have to be put up constantly, because they can wear out quickly. Thus, flying a Confederate flag reflects a continuing commitment to maintaining a symbol of white supremacy. Confederate monuments, on the other hand, were almost all erected decades ago.

For this reason, they’re part of our landscape. Yes, they’re reminders of the days of slavery and secession. But they teach important lessons: they point to a Southern political system that, from the 1870s to the 1930s (the period of most frequent commemoration), continued to support the ideals of the Confederacy. They’re graphic reminders of Jim Crow, and the ways white supremacy was codified in statutes, social practices and stone. And they reveal the psychology (however misguided) of an era and people: the fact that white Southerners and their elected leaders believed in the righteousness of their society.

Ultimately, removal of the monuments will, quite literally, erase an unsavory – but important – part of our nation’s history.

In present-day poverty, the echoes of a racist past

There’s a second reason to go slow on renaming. It’s important (for individuals, as well as communities) to understand how our past is connected to the present.

The legacy of violence and limited educational and vocational opportunities during the eras of slavery and Jim Crow are undeniably connected to the fact that one-third of African American children today live in poverty.

Those who argue for expanded social welfare spending to alleviate the ravages of poverty make the plea that poverty is related not to personal culpability, but to legacies of racism that have lasted for generations. Confederate statues are tangible symbols of this legacy of oppression.

They’re another reminder of the need for nuance in the telling of our nation’s history; in understanding how we get to where we are today, we need to acknowledge the good along with the bad – which means not tearing it down.

Editor’s note: This is an updated version of an article first published on July 8, 2015.