Debra Winger should probably have a marriage-advice column

And other stunning realizations from Salon's talk with her and co-star Tracy Letts about their film, "The Lovers" 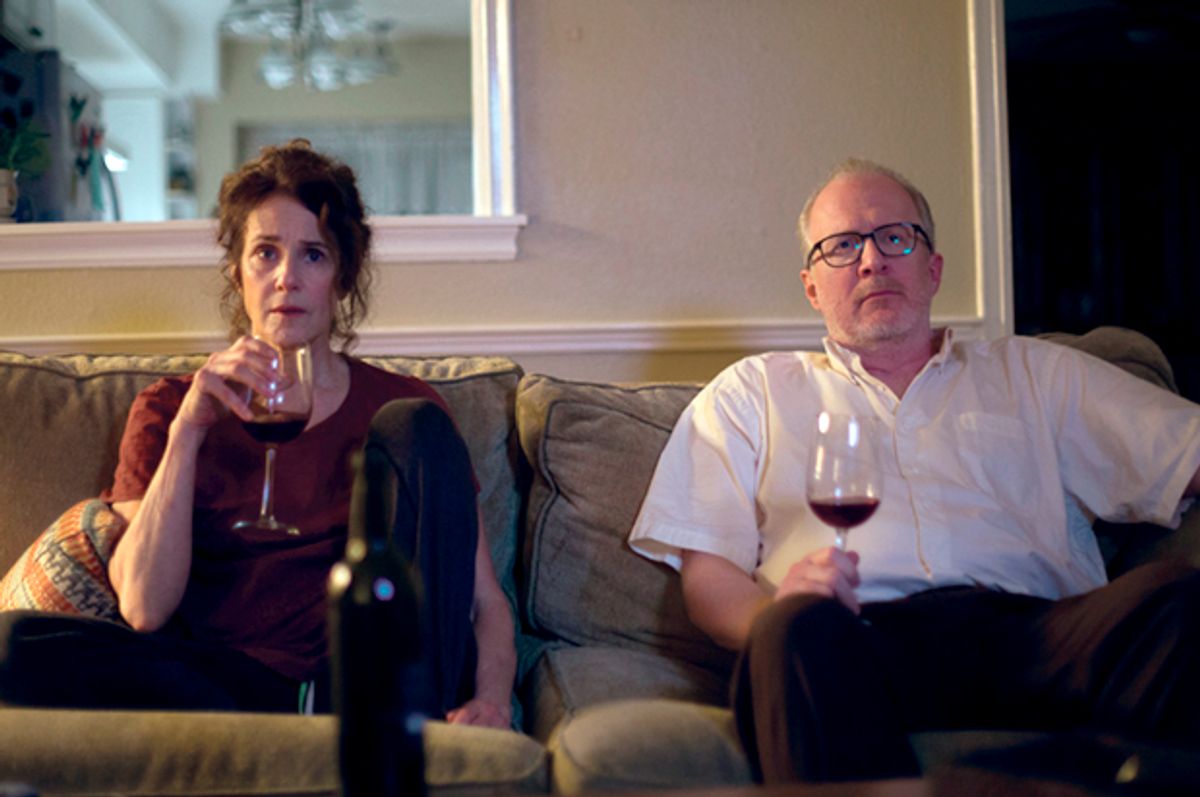 In Azazel Jacobs’ nimble comedy “The Lovers,” Mary (Debra Winger) and Michael (Tracy Letts) are married to each other but in love with other people. They plan to, at long last, break up and move in with their lovers — she with Robert (Aidan Gillen) and he with Lucy (Melora Walters). Everyone's just waiting for their son Joel (Tyler Ross) to visit before they officially announce their separation. However, in the days before Joel’s visit, something sparks between Mary and Michael, and they start having passionate sex . . .  with each other.

Winger and Letts are drolly amusing as the couple whose lives are rekindled by their sudden and unexpected attraction. Suddenly, they have to hide their marriage from their lovers. Winger is charming as Mary, a woman distracted by her desires, and Letts shows his deft comic timing in his portrait of a man who always wants what he doesn’t have.

The actors met with Salon during the Tribeca Film Festival to talk about making “The Lovers,” when it is okay to lie, and what constitutes a great date.

What observations do you have about your own marriage or relationships and domestic life that you brought to the characters?

Debra Winger: Well, I think when you say "brought to the character," it feels like whatever I would answer, it would assume that I knew what I was doing. So let’s clarify right off the bat that I don’t have a fucking clue about life or the movies. But that said, I think that it goes hand in hand with the idea that the art for me is living the question. Although I have no answer, you ask a wonderful question. It was the question of how do we keep love? How do we make love stay? How do we stay awake in whatever relationship we’ve chosen? In every relationship, really . . . child, parent, partner . . . how is that? It’s always the same series of questions, which is it’s an inside job. You go out and, in the case of the movie, you get lit up by someone else. You come home and you’re hiding it. Whether you want to admit it or not, that lit-up quality starts to be attractive again.

Yes, well, I always find that the chase and seduction is more interesting than a relationship.

Yeah, because the moment is more interesting than the future. [Laughs] Or the long run isn’t really a thing. The only thing that’s a thing is the moment. We don’t know, when someone is lit up from the inside, why we’re so attractive. We think it’s other things. The minute we have a pain, we want a diagnosis. So I think the minute we feel love, it’s very hard to just let it be. We want to identify it, we want to catalog it, we want to keep the thing and create the environment it happened in. That’s where marriage comes from! Let’s make an institution out of it!

The film’s humor stems in part from the pauses and silences. The way the characters’ expressions and body language are private, but bubbling to the surface. It’s the lighting up inside you just talked about. Can you talk about those aspects of your performances?

Winger: Let me ask you a question: Do you feel that way about Tracy’s performance as well?

So what does that tell you as a critic? It’s Aza [Jacobs, the director]. He inspired that. There isn’t a gnarly performance in the movie. We didn’t know what the other was shooting. We had a similar thing in the hallways at our offices. It wasn’t scripted. We both had a real relationship with him. Aza sets the camera back there and we don’t ask, “What story am I telling?” I think you always have to trace it back to the director.

You are not known as a comic actor, but you exhibit great comic timing in “The Lovers.”

You haven’t seen my vast library of comedies, evidently. I did start out as a stand-up.

Really? What was that like, and why did you pursue that?

Well, you know, it was exactly the expression of my inner self. Self-deprecating, masochistic. I was in L.A., so it seemed like the thing to do.

Tracy, I like that we don’t get a sense of how long Mary and Michael have been together. What backstory did you create for how Mary and Michael met, how they fell in love and what their wedding day was like?

Tracy Letts: I don’t do a lot of that stuff — creating histories. I do a little bit, as much as need for the dramaturgy of the thing.

How about this question, then: What does Michael see in Lucy that he doesn’t see in Mary — other than it’s not her?

Letts: Somebody really smart said to me once, when I was going through something similar: People have affairs to feel better. It’s not necessarily that you get something from the other person that you’re not getting from your partner, it‘s that you created a situation for yourself in which you’re unexpressed and so maybe you feel another person allows you to express yourself.

Winger: You see that! We did not confer, and I said the same thing. You get lit up inside, and you’re attractive again. It’s an inside job.

Do you think Mary and Michael like, or even love themselves?

Letts: First of all, are our characters Michael and Mary?

Winger: I know! I went through the same thing right then!

Winger: I don’t know. That’s so psychological! I don’t know how to go there. But I will say that I felt when we were inside of that life, and hit that house, I felt the tiredness of it. I felt how tired I’d be. The times in my life that resonated — I stayed a day too long in Mississippi, or the times in my marriage when we looked at each other — Arliss [Howard, Winger’s husband] and I — and felt the same thing. So we were both ready to kick it in its ass. That’s the saving grace. You’re willing to re-ask the question. If you’re not willing to say, “What the fuck?” you’re going end up in trouble. You gotta say “What the fuck?!”

Winger: You are? Maybe I should have a column!

Winger: A column? What do I call it?

Winger: No, that wouldn’t be good. But I’m going to consider this possibility now.

You let me know. I’ll publish it.

Winger: I was saying… that the three of us come from, not vastly, but really different stories. I’m the age I am. I refuse to say it out loud. I’ve been in a marriage relationship for 25 years. Aza is forty-hmm . . . he’s married, and Tracy, longtime bachelor, recently married, and the three of us clash in the middle and make this story. I realized, it’s all up there, these three stories.

I liked the parallel with the characters, and you do similar things. But the characters lie to themselves, each other, and their lovers. When do you think it’s appropriate to lie, and how do you do it convincingly? I know you’re both actors . . .

Winger: I really enjoyed myself.

Letts: I lie better than that. That was fantastic!

Winger: Oh, you do that?

Letts: Absolutely do it. That was fantastic! You were great!

“I can’t stop thinking about it” is my go-to.

Letts: I feel we do lie; we’re good at lying, and yet suddenly we become honest when we’re in that position? Suddenly, it’s "Oh, I couldn’t possibly tell a lie to that person." I have to wink and say, “I didn’t really like what you did.” That’s the one situation where it’s appropriate to lie.

Winger: That’s why it’s all an inside job. When you start with yourself, and stop lying to yourself — which is by the way, maybe the day you die — you go, “I’m dying,” and that’s the first time you told yourself the truth. It’s how often you’re willing to revisit the truth that you’re lying. I think that makes a difference. We’re just born liars. Has anyone used that title?

Letts: "Born Liars." I thought that was the title of your column!

The secret I’ve learned about relationships is that the person with the least interest in the relationship controls it.

Your marriage column is coming along!

Winger: [Laughs] As we speak! No, but I mean, you know. You both have to pay attention, and you have different styles of paying attention. Hopefully, you dovetail, because you can’t always be . . .  I, sitting over here with a vagina, I would have to say that females do a little bit more of this, the female part of the brain does a little bit more of this than the male side, if there is such a thing. I do think that nature gives women these biological wake-up calls, “mortality sandwiches,” if you will, with our bodies. We can’t deny it, man. At 32, you start going, “Am I going to produce?” And at about 50, you go, “OK. I’m going to die. Eventually.” It comes from your body. I was told by a Chinese doctor that men have a similar biological thing happen, but it’s subtler, so they have to listen more carefully.

Winger: They go out and buy a Porsche.

And get a younger girl!

Winger: The cars in the movie were great, weren’t they! Her Volvo, when they pulled back — it sounded like I said “her vulva!” but I didn’t. Her Vol-Vo on that shot, I bark with laughter. She’s like seriously pissed, and she’s in a burnt Volvo. [Laughs] It’s too funny.

You understand the characters so well, because of their body language.

Winger: But I learned a lot from you. You’re one of the most patient actors I’ve ever worked with.

Letts: You have to quote everything nice that Debra Winger says about me.

Winger: No, I really mean that because it’s rare, especially on a film, with nerves and the time you have to shoot it and all the money and all the bullshit, you can find the time in the theater where you have all the rehearsal time and rehearsal period, and you don’t have that in film. I started in film, so I’m not used to patient actors. I get inside the scene after “action” and I feel calmer. There’s always something to learn.

Letts: I learned a lot more from Debra Winger than she learned from me.

Letts: I just happen to be an infinitely patient person in my actual life.

Really, patience — that’s something I don’t have.

Winger: Well, then forget your relationship. It ain’t lasting! End of column!

My partner is very patient. Well, there’s the line about the gardener and the rose.

Winger: You have a lot of research in this!

OK, last question: What is your idea of a perfect date?

Letts: You mean with our current partners?

You are a comedian!

Letts: What’s your idea of a perfect date, Debra, with Arliss?

Letts: I can’t top that.

Winger: Why are you going to go and look for anything fancy?

Winger: That is a perfect anniversary dinner. But if you think of all the tendrils out from those three simple things, as you get older, you have to be careful what you eat, so you don’t feel sick when you get to the third part. [Laughs] And the movie can really derail you if it’s fucking, you know . . . “Son of Saul,” shoveling bodies into the oven. You’re probably not going to get to the step three. Or maybe you are?