Trump can try to ban Muslim immigrants, but he can’t ban the roasting he takes from comics like Minhaj and Ansari 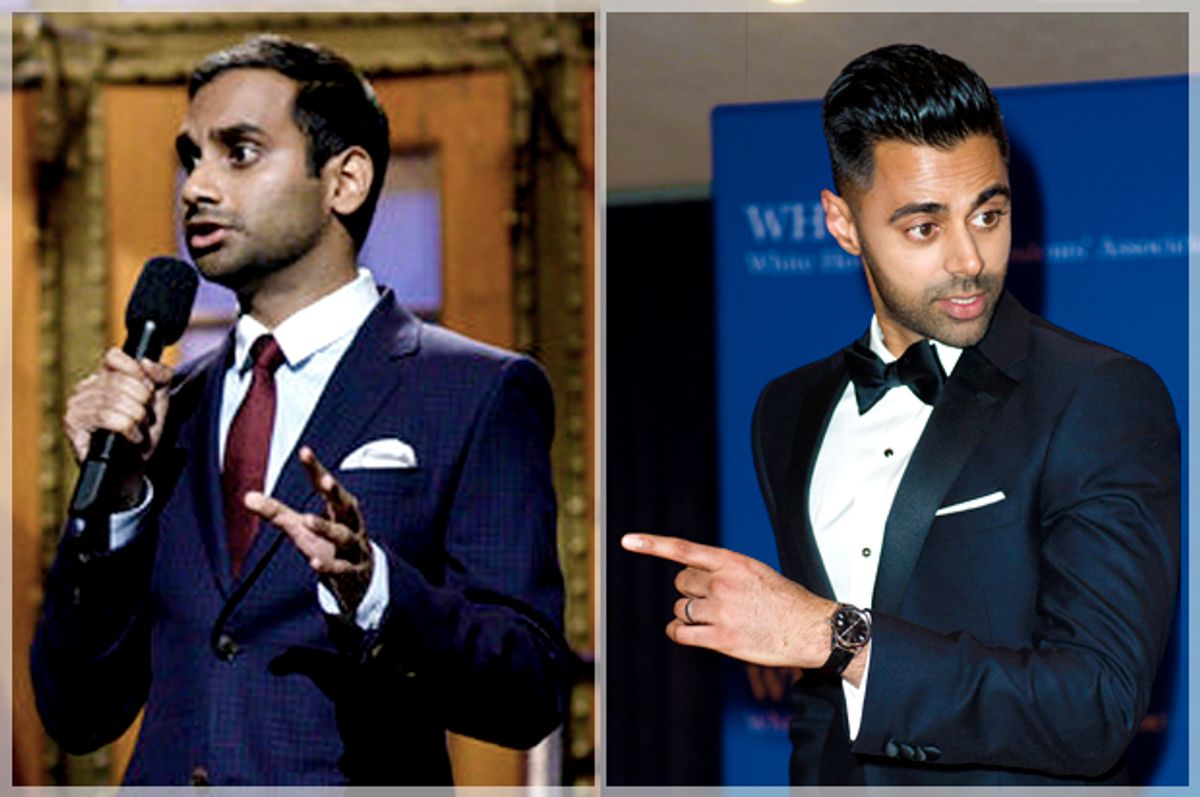 Coincidence? Nope. In fact, it was easy to predict that Trump was not going to show up and listen to Minhaj roast him to his face.

We know that Donald Trump can’t take a joke. He has been coming after Alec Baldwin and "Saturday Night Live" since before the election, even calling for the show to be canceled after it roasted him.

And we know that Trump has a Muslim problem. Only days into office Trump signed an executive order indefinitely blocking refugees from Syria from entering the United States, barring all refugees from resettlement for 120 days, and prohibiting nationals of seven predominantly Muslim countries from entering the United States for 90 days. The effort was thwarted, but plans remain to attempt a similar ban. Meanwhile there is clear evidence that the Trump era has unleashed a massive spike in Islamophobic hate crimes.

So rather than attend the dinner and face jokes from a Muslim American comedian, Trump staged his own glory fest in Pennsylvania where he could make up stories about his successes, bash the press and take pot shots at anyone who has disagreed with him while his supporters cheered on. But more disturbingly, Michael Gerson points out that Trump devoted “about half his speech to the dehumanization of migrants and refugees as criminals, infiltrators and terrorists.”

While Trump was delivering one of the most hate-filled speeches of his career, Minhaj, a senior correspondent on “The Daily Show,” was offering the country one of the best — if not the very best — comedy routines in the history of the White House Correspondents’ Association Dinner.

The White House Correspondents’ Association Dinner has been running since 1921. It is an event that honors the reporters that cover the White House and helps promote their association, which offers a number of scholarships and grants to students interested in journalism. But more importantly it is an event that celebrates our nation’s commitment to a free press and free speech.

When Stephen Colbert spoke at the dinner in 2006, the event was epic as well. While Colbert performed for a less-than-thrilled George W. Bush, our nation witnessed the first time Bush had been called out on the war in Iraq to his face. Colbert went after the faulty logic used by the Bush administration to justify the war, but he also went after the news media that had been Bush's accomplice.

In one of his most noteworthy moments he mocked the news media for simply accepting the Bush administration’s version of events. He told the reporters in the room to “write that novel you got kicking around in your head. You know, the one about the intrepid Washington reporter with the courage to stand up to the administration? You know, fiction!”

Minhaj, in contrast, did not go after the press for simply accepting the Trump administration’s version of events. Instead, he went after the press’s problem of trust. He pointed out that “we are living in the golden age of lying. Now’s the time to be a liar, and Donald Trump is liar in chief.”

He then explained that what is astonishing is that Trump is constantly called out on his lies and it simply doesn’t matter. It doesn’t affect his supporters at all. That leads Minhaj to wonder if “maybe it’s because we’re living in this strange time where trust is more important than truth.” Minhaj cleverly notices that Trump has managed to totally redefine trust. There is nothing trustworthy about Trump. He not only lies openly, but he reneges on his promises daily. And yet his followers still trust him.

Minhaj explained that even if the news media tells the truth, the public doesn’t believe it because they don’t trust the press. And he acknowledged that the public has a point — the press has been far from perfect. Calling out CNN and MSNBC, he mocked them for their silly and sensationalist coverage.

He also spared no words for Fox News reporters, whom he suggested should simply be too embarrassed to even show up at the dinner. He jabbed at them for their network’s payout to Bill O’Reilly, but he also went after their open Islamophobia. “As a Muslim, I like to watch Fox News for the same reason I like to play ‘Call of Duty.’ Sometimes, I like to turn my brain off and watch strangers insult my family and my heritage,” he quipped.

Throughout his speech, Minhaj reminded his audience that he was speaking as a Muslim American. “I would say it is an honor to be here, but that would be an alternative fact” he joked. “No one wanted to do this. So of course, it landed in the hands of an immigrant.”

One of the most brilliant elements of his speech was the creative and compelling way that he combined a defense of a free press with a defense of free speech and of minorities. “This event is about celebrating the First Amendment and free speech. Free speech is the foundation of an open and liberal democracy," he said. "From college campuses to the White House, only in America can a first-generation, Indian-American Muslim kid get on this stage and make fun of the president. The orange man behind the Muslim ban.”

And yet as Minhaj was defending the First Amendment, he pointed out that our president is openly hostile to it: “Donald Trump doesn’t care about free speech. The man who tweets everything that enters his head refuses to acknowledge the amendment that allows him to do it.”

There is a certain poetic justice to the fact that the first Muslim American comedian to host the White House Correspondents’ Dinner used the occasion to school an Islamophobic, free-press-hating, libel-threatening president on the meaning of the First Amendment.

The appearance of Minhaj at the dinner helps draw attention to a larger body of Muslim American comedy that has been on the rise in this nation since 9/11.  While there is a range of comedy coming from the Muslim American community, it all shares a common interest in combatting Islamophobia and reinforcing the notion that Muslim Americans support our nation’s core values, in some cases better than those on the right.

One fun example of this can be found in the work of Egyptian comedian Bassem Youssef, who is often referred to as the Arab Jon Stewart. His series on Fusion, “Democracy Handbook,” delves into the crises facing our democracy. As this promo shows, the series directly tackles both Islamophobia and the Trump era breakdown in democratic values. Explaining that “democracy ain’t what it used to be,” the promo then shows Youssef talking to a man who says that “the Second Amendment secures all your other rights. I call it the other First Amendment.”

Mohammed Amer, who goes by stage name Mo Amer, is an Arab-American stand-up comedian of Palestinian descent. Amer, who makes up one third of the comedy trio “Allah Made Me Funny,” made his debut on network television when he was featured on "The Late Show with Stephen Colbert" on March 3, 2017. In his opening stand up, the Muslim comedian took jibes at the American government and even re-visited his famous plane flight sitting next to Trump’s son Eric.

In fact, a lot of contemporary Muslim American comedy can trace its roots to the Bush era.  For instance, in response to George W. Bush’s coining of the phrase the “axis of evil” a comedy troupe started the “Axis of Evil Comedy Tour.” The team of comedians with Mideast roots all describe the ways that 9/11 changed their lives and suddenly made them constantly a source of suspicion and derision.

In another example, Negin Farsad and Dean Obeidallah made the film “The Muslims are Coming,” which follows a team of Muslim American comedians as they perform free stand-up in the American South and Southwest, attempting to reach out to fellow Americans and counter Islamophobia.

This army of Muslim comedy is attempting to combat the ongoing onslaught of negative stereotypes about the Muslim world that dominates the media. The Center for American Progress reports that eight donors contributed $57 million to the Islamophobia network between 2001 and 2012.

Maz Jobrani, one of the “Axis of Evil Comedy Tour” members, tells one joke where he begs for the news media to show Middle Easterners doing something positive — like "baking a cookie or something."

"That gets a laugh, but it also gets a clap from regular audiences, and I think that's because a lot of people are sick of seeing Middle Easterners depicted the way we're always depicted," he explains.

And yet, as Minhaj made clear in his speech, one thing that is linking the treatment of Muslim Americans and the media these days is the way that they are equally under attack by the White House.

In fact, Trump supporters have recently called for Colbert to be fired after he delivered an exceptionally biting takedown of Trump: “You have more people marching against you than cancer. You talk like a sign-language gorilla that got hit in the head.” And then the line that caused Trumpsters to go into a tizzy: “In fact, the only thing your mouth is good for is being Vladimir Putin’s c**k holster.”

As Obeidallah pointed out in his defense of Colbert in The Daily Beast, the controversy exploded late Tuesday on Breitbart, “in between articles demonizing immigrants and Muslims.” The problem, as Obeidallah explains, is that these calls for Colbert to be fired are part of a larger attack on a free press and free speech. Trump and his team have consistently sought ways to silence any criticism of them — whether serious or in jest.

Minhaj opened his speech last week joking about how fragile his very own free speech rights feel under Trump: “My name is Hasan Minhaj, or as I’ll be known in a few weeks, no. 830-287.” It’s a joke that’s funny and serious at the same time. And it’s a brilliant reminder that comedians are one of the first targets of authoritarian regimes.

Trump doesn’t only want to ban Muslims; he wants to ban jokes about him as well. And that is why the Muslim American comedy that is coming after him isn’t just funny — it’s proof of the strength of our democracy itself.