A weekend of frantic spin: Republicans ramp up the blatant lying after their Trumpcare victory 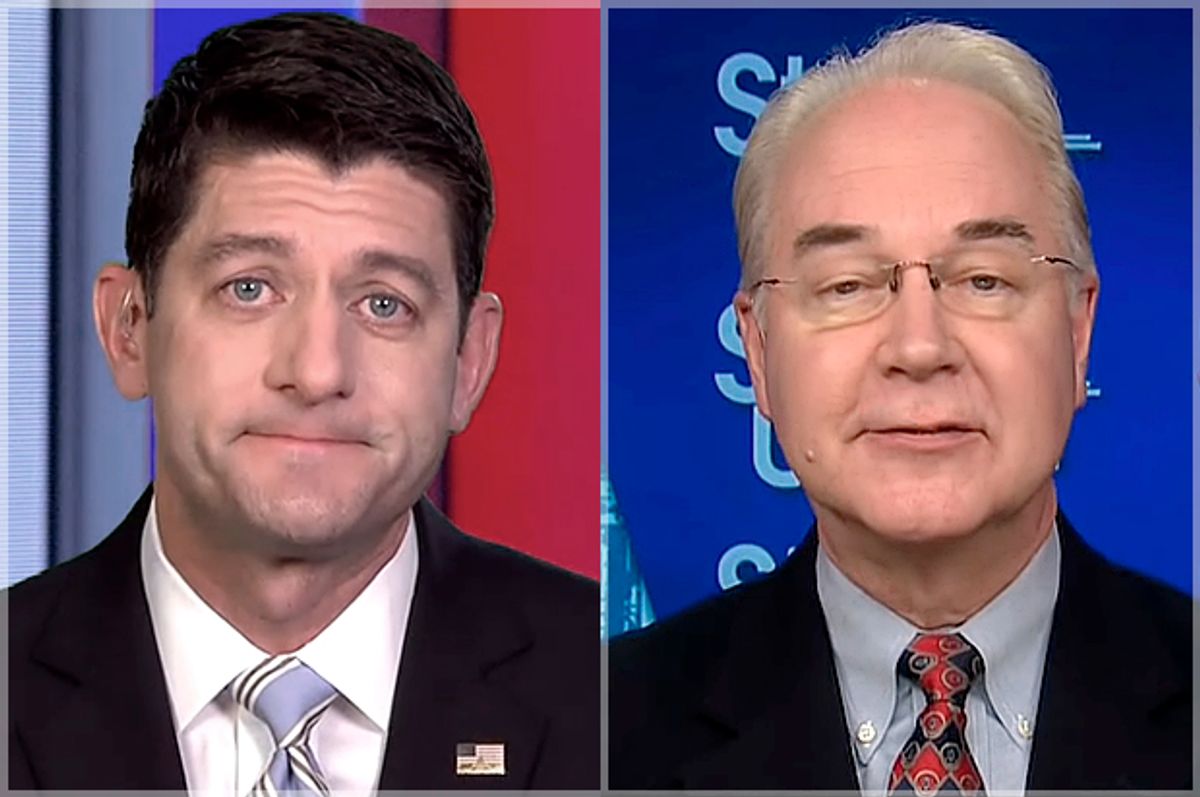 The Republicans were very, very happy last week when they finally got their Trumpcare bill through the House by one vote. The political establishment's favorite Republican, House Speaker Paul Ryan, got to take a long-awaited curtain call as even his normally hostile right-wing colleagues gave him an ovation. Then House Republicans hopped on party buses for the short trip to the White House, where they all patted one another on the back and basked in the unprecedented unpopularity of their leader, Donald Trump, as he congratulated them on fulfilling their promise to make America sick again.

It's unclear exactly why this should have been such a heavy lift. Just a little over a year ago, President Barack Obama vetoed a bill to repeal the Affordable Care Act that had sailed through both houses of Congress. Why, you might almost think Republicans weren't actually serious about that one, or they would have simply passed it again and sent it to Trump's desk to be signed into law. The fact that they didn't do that perfectly illustrates the point that all the hand-wringing over Obamacare was political posturing. Once given the power to repeal it, the GOP has had to face up to the fact that it would be ruining millions of people's lives and destroying families' financial security for the sake of massive tax cuts.

In the end, party leaders felt it was worth it — at least in the House. Now all eyes turn to the Senate, which, for some unknown reason, everyone seems to think will save the day. But as HuffPost's Jonathan Cohn pointed out on MSNBC on Sunday, it's possible that the House has set the bar so low with its cruel and dishonest bill that any improvement (say, reducing the number of people thrown off their health insurance from 24 million to 15 million) will be considered an act of great empathy, and everyone will applaud the great work of the senior statesmen of the Senate.

Some of the, shall we say, dimmer lights in the GOP have already tripped themselves up drinking the deadly poison before they understood what was in the cup. Wisconsin's Gov. Scott Walker, the once and future Great White Bread Hope of the Republican Party, blurted out that he would consider applying for the waiver granting him the right to allow insurers to discriminate on the basis of pre-existing conditions. He claimed that everyone had really liked the "high risk pools," before Obamacare ruined everything by making it so everyone was treated equally. There was an immediate outcry from his constituents and he later clarified that he wasn't "looking to change" policies for people with pre-existing conditions, which almost certainly laid no one's concerns to rest.

Later, Walker got into a spat with a county executive who had the nerve to ask him about health care at a tourism event, which had the governor hopping mad:

If the reaction of Republican leaders on the Sunday morning talk shows is any indication, the official plan is simply to lie about what's in the bill and hope nobody finds out.

The House failed to let the Congressional Budget Office score the Trumpcare bill before representatives voted, but Speaker Ryan insisted on ABC News' "This Week" that any mention of that fact was "a bogus attack from the left," since the CBO had scored the bill that failed last month and only "three pages" of changes were made. Needless to say, those three pages contained all the pernicious additions that the right-wingers of the House Freedom Caucus demanded and received, resulting in the group's support and the bill's passage.

Ryan went further and claimed that “under this bill, no matter what, you cannot be denied coverage if you have a pre-existing condition.” He forgot to mention that it could cost as much as taxpayers lay out weekly to send Trump to make personal appearances at his for-profit golf resorts. (I'm only slightly exaggerating. The costs for people with pre-existing conditions in certain situations will skyrocket. It's unlikely to match the millions Trump has already charged the taxpayers to fund his weekend promotional trips on behalf of the Trump Organization.)

In reality, the costs and consequences for people with pre-existing conditions will be much greater than what was described in the original CBO report. Destroying that guarantee was one of the Freedom Caucus' fundamental demands, and it received it. The $8 billion Band-Aid called the Upton amendment will do little to pay for what most experts believe is at least a $200 billion expense.

But for all his dishonest spin, Ryan was pretty much George Washington copping to having chopped the cherry tree as compared with Health and Human Services Secretary Tom Price's act. He appeared on a number of shows on Sunday and was a gushing fountain of disinformation, distortion and misdirection. Like Ryan, Price insisted that people with pre-existing conditions will be just fine. He also ludicrously asserted that the goal of Trumpcare is to “make certain that every single person has health coverage.”

On CNN he responded to Jake Tapper's question about whether the $880 billion in Medicaid cuts will result in loss of health care with some incomprehensible nonsense about how everyone will be covered because the new plan is "more responsive" — whatever that means. On NBC News' "Meet the Press" he fatuously argued that many people are still uncovered by insurance with the ACA and Trumpcare would cover them all.

Nothing could be further from the truth. The Congressional Budget Office and every nonpartisan analysis has made clear that this grotesque parody of a health care plan will actually result in tens of millions of people losing coverage, from both the cuts to Medicaid and the subsidies. Others will simply be priced out of the market entirely.

These GOP leaders know this. Their frantic pirouettes around the facts and the numbers proves it. They are simply driven to deliver for their true constituents: corporations and wealthy individuals who will see an $800 billion windfall in tax cuts. And if some of their true believers feel the effects, Republicans obviously figure they can blame this all on the fact that Obamacare was so terrible that it couldn't possibly be corrected all in one go. If I were a cynical person, I might even suspect that they were planning to go back next year to "fix it" with more tax cuts.