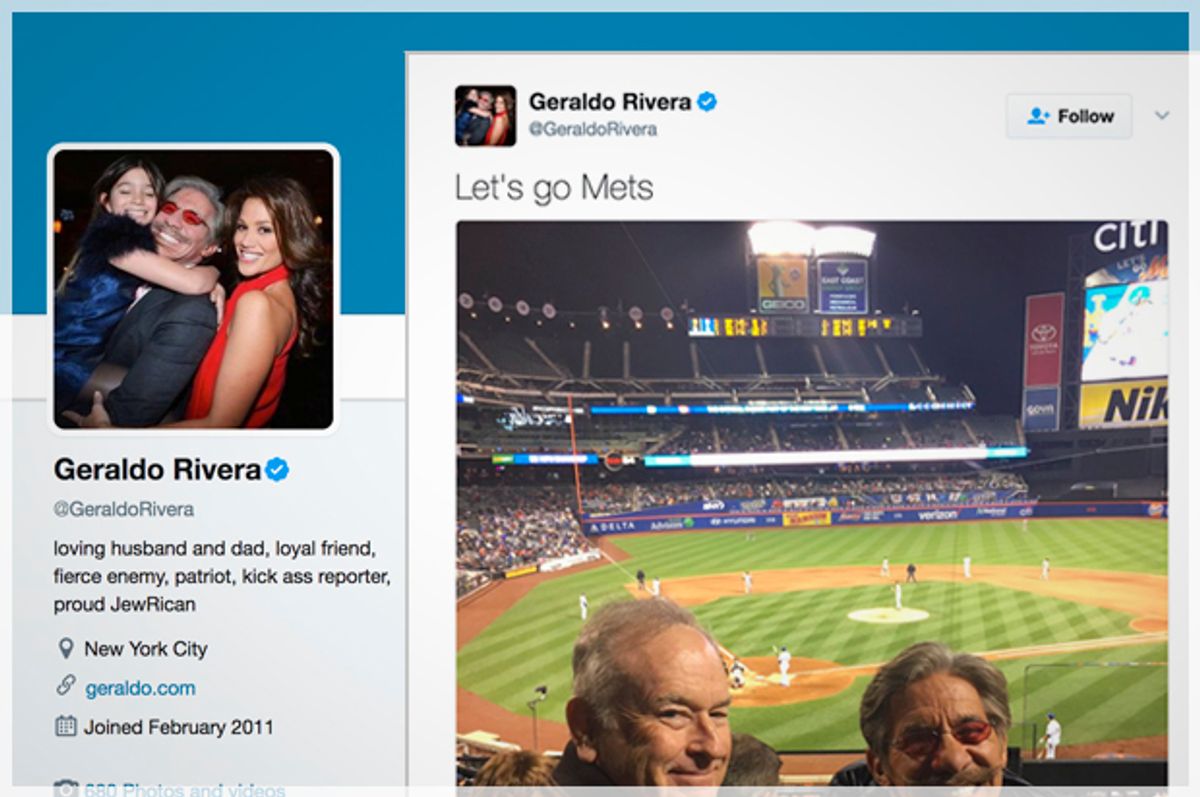 Disgraced former Fox News host Bill O'Reilly made one of his first public appearance since being forced out of the conservative cable news giant amidst multiple allegations of sexual harassment with former Fox News colleague Geraldo Rivera. The two enjoyed a nice night watching the New York Mets at Citi Field. Rivera shared a picture of them together on his Twitter page on Monday night.

However back in September, as Senior NBC news writer Brad Jaffy pointed out, Rivera wrote a lengthy post on his Facebook page in which he discussed his relationship with former Fox New head Roger Ailes — who was also ousted for numerous sexual harassment allegations — and expressed his regret for originally supporting Ailes staunchly -- even dismissing allegations made by former colleague by Gretchen Carlson.

In a tweet back in July when allegations first came out against Ailes, Rivera tweeted "Don't believe the crap about #RogerAiles. Only ones talking dirt are those who hate #FoxNews & want to hurt networks that's kicking their ass."

Rivera changed his tone a few months later after more details came to light, and as Ailes was eventually ousted from Fox News.

"Roger resigned two days later when it became apparent that Gretchen was not alone in alleging abhorrent behavior behind his closed doors. Now I am filled with regret for stubbornly discounting their various allegations. The Murdochs would not have turned the world upside down but for good cause. Moreover, I apologize for my skepticism. Like victims of sexual assault, those alleging harassment deserve the presumption of credibility," Rivera wrote at the time. Adding, "To all the victims of sexual harassment, direct and indirect, I am sorry for what happened to you. As the father of three daughters, including one in the news business, I urge all who have been offended to reach out. Similarly, if you see harassment, say harassment, even if the alleged offender is an old friend."

But as it turns out, Rivera's apology was either short-lived or completely disingenuous.

After deciding to sit beside O'Reilly at a baseball game as if it weren't controversial or even slightly insensitive for him to be doing so, it is clear that the only reason he issued the apology in the first place, had nothing to do with the fact that publishing company HarperCollins halted the publishing of his memoir in order to remove the ample praise he offered for Ailes, right?

Anyway, nothing to see here, back to America's favorite pastime:  baseball.