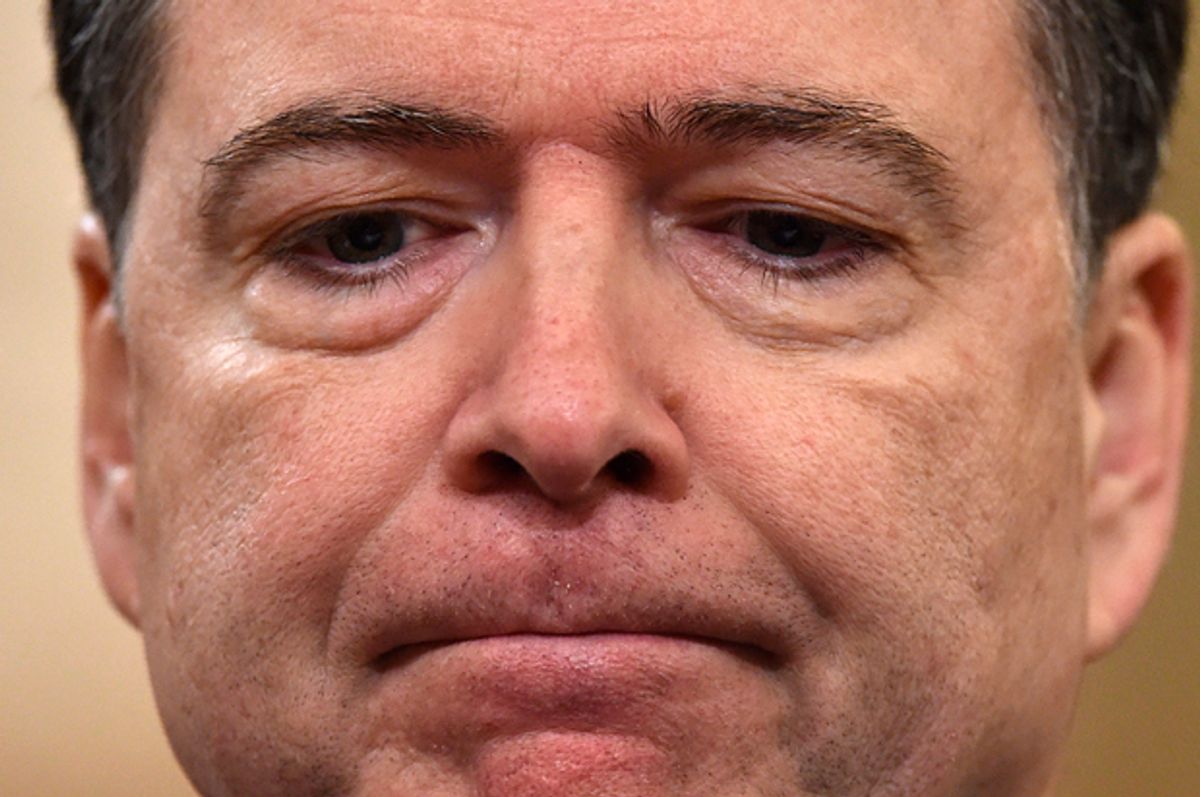 “Today, President Donald J. Trump informed FBI Director Jamey Comey that he has been terminated and removed from office,” a White House press release read. The White House also noted that the president was acting on recommendations from “both Deputy Attorney General Rod Rosenstein and Attorney General Jeff Sessions” to fire the embattled FBI director:

After testifying before the Senate Judiciary Committee last week, Comey made headlines on Tuesday when it was reported that his testimony about Hillary Clinton’s classified emails being forwarded to aide Huma Abedin’s husband, disgraced former Rep. Anthony Weiner, was riddled with inaccuracies.  Comey testified that “hundreds of thousands” of Clinton emails were forwarded to Weiner, which was apparently untrue. Before his firing was announced on Tuesday, the FBI sent a letter to the chairman of the Senate Judiciary Committee attempting to clarify Comey's comments. Comey was previously scheduled to testify in front of the Senate Intelligence Committee on Thursday.

Comey’s termination comes at the end of Trump’s disillusionment with the maverick FBI director. During the 2016 election cycle, as the FBI was scrutinizing Hillary Clinton’s use of a private email server during her tenure as Secretary of State, Trump decried the FBI’s decision not to prosecute Clinton. “FBI director said Crooked Hillary compromised our national security. No charges. Wow!” Trump wrote. “Very very unfair!”

As Trump and his associates’ possible ties to Russian intelligence fell under scrutiny, Trump’s opinion of the FBI seems to have soured further. In a bizarre tweet in February 2017, he blamed the NSA and FBI for leaking information to journalists.

Democrats, for their part, were quick to jump on news of Comey's sudden firing.

Sen. Ron Wyden, D-Ore., called for Comey to testify in an open hearing about the status of the FBI's investigation into possible collusion between the Trump campaign and Russia:

The ranking member of the House Permanent Select Committee on Intelligence, Rep. Eric Swalell, D-Calif., said in a statement that Comey's firing "should send a chill down the spine of every American, no matter who they voted for. This is not what an innocent person would do; this is an abuse of power, and shows a consciousness of guilt."

Rep. Elijah Cummings, D-Md., ranking member of the House Oversight Committee, pointed out in a statement that it is "mindboggling" that Attorney General Sessions "who claimed to have recused himself – was directly involved in the decision to fire Director Comey according to the White House itself."