Attacking government's paltry grants to historically black colleges, then explaining it all away, is classic Trump racism 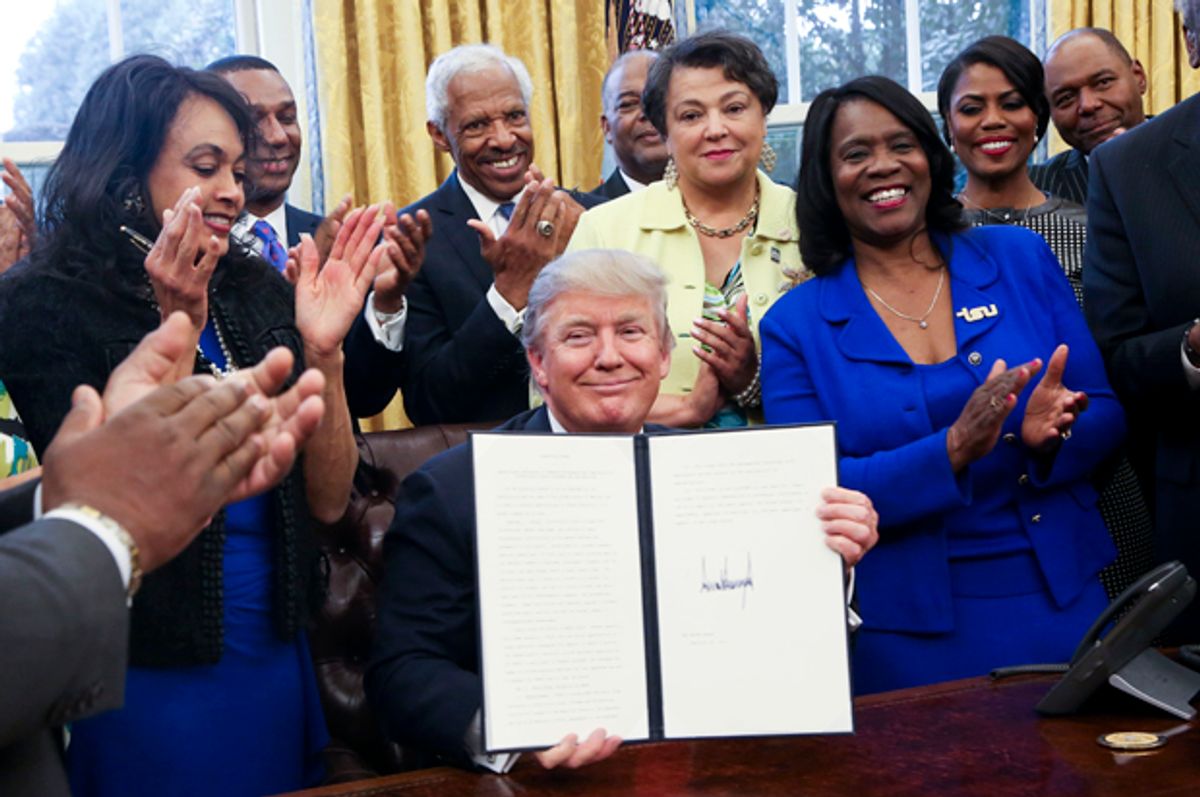 Last Friday the Trump administration once again failed to pull off a basic executive branch function without shooting itself in the foot.

The occasion was the signing of a $1.1 trillion omnibus spending bill to keep the government funded through the end of September. The bill itself may have come about after the usual contentiousness between parties and factions in Congress over spending levels, to the point where lawmakers were openly talking about a government shutdown if they could not come to an agreement. But in the end, agreements were reached and legislation was passed and sent to Donald Trump’s desk for his signature.

That was when the president and his team attached a signing statement, those memorandums that presidents sometimes add to legislation to announce their disagreement with a law or intention to ignore part of it. Part of this statement read as follows:

My Administration shall treat provisions that allocate benefits on the basis of race, ethnicity, and gender . . .  in a manner consistent with the requirement to afford equal protection of the laws under the Due Process Clause of the Constitution's Fifth Amendment.

As an example, Trump pointed to a provision for $20 million in loan subsidies to the Historically Black College and University Capital Financing Program. This brought on confusion and denunciations by presidents of historically black colleges and universities, particularly those who had met with the president in the Oval Office not long after his inauguration for what was described as good-faith outreach from a president who had run the most racially divisive campaign in recent history and staffed his White House with white nationalists.

By Monday the administration was walking back the implications of the signing statement. The White House released a statement from Trump pledging his “unwavering support for HBCUs and their critical educational missions.” Omarosa Manigault, who directed the Trump campaign’s outreach to black voters, announced that she had urged the administration to clarify the signing statement so there would be no confusion.

But this signing statement attacked more than loan subsidies for historically black universities and colleges. It also suggested the president would target block grants for housing and educational initiatives for Native Americans and “minority business development.” And those were just the cited examples. There are many other minority-directed funding programs in the budget that could be at risk if the Trump administration follows through on this threat.

The statement is best considered in the context of other actions by this administration that affect ethnic and religious minorities. There is the ban on entry into the United States for citizens of half a dozen Muslim-majority countries. There is the immigration crackdown that has seen even l green card holders threatened with deportation. There is Jeff Sessions, Trump’s attorney general, who has spent his first months in office freeing up police departments to go after minority populations.

There is the language Trump and his surrogates have invoked time and again about the “carnage” that has supposedly turned inner cities into war zones. There is the hiring of Steve Bannon as a senior White House adviser. As chairman of Breitbart News, Bannon oversaw a website that had its own “Black Crime” tag and it loves to highlight stories of crimes committed by illegal immigrants and African-Americans in order to frighten its mostly white readers.

There is even the repeal of Obamacare that Trump pushed for hard during the campaign, which resulted in the House's passage last week of the American Health Care Act. Should the Senate pass the AHCA and it become law, this will cut $880 billion from the Medicaid that provides health insurance for millions of low-income people of color, leaving them with no options for care outside of  overburdened emergency rooms.

In short, this is an administration with zero credibility on issues affecting racial minorities. It is an administration powered into office and animated by white supremacy. In fact, making life more miserable for ethnic minorities in America might be the only “success” that Trump has had in his first three months in office. Considering the people staffing his administration, like Bannon and Sessions, that is no accident.

In this light, the signing statement should be viewed as something more pernicious than just a simple note requiring clarity from Omarosa. The politics behind it perfectly fit with the white grievance politics that drive Trump’s base of supporters. If there is any minority anywhere receiving a tiny advantage from the government, they expect Trump to stamp it out. It is worth noting here how paltry the sums involved in the threatened program are in the context of a $1.1 trillion budget — just $20 million in loan subsidies for historically black colleges and universities, $15 million for Native American businesses that pick up federal contracts, and a handful of other relatively small expenditures.

But nothing is too small for Trump and his team of white nationalists to attack. They can’t even do literally the minimum amount of work expected of them to keep the government running without proving it.