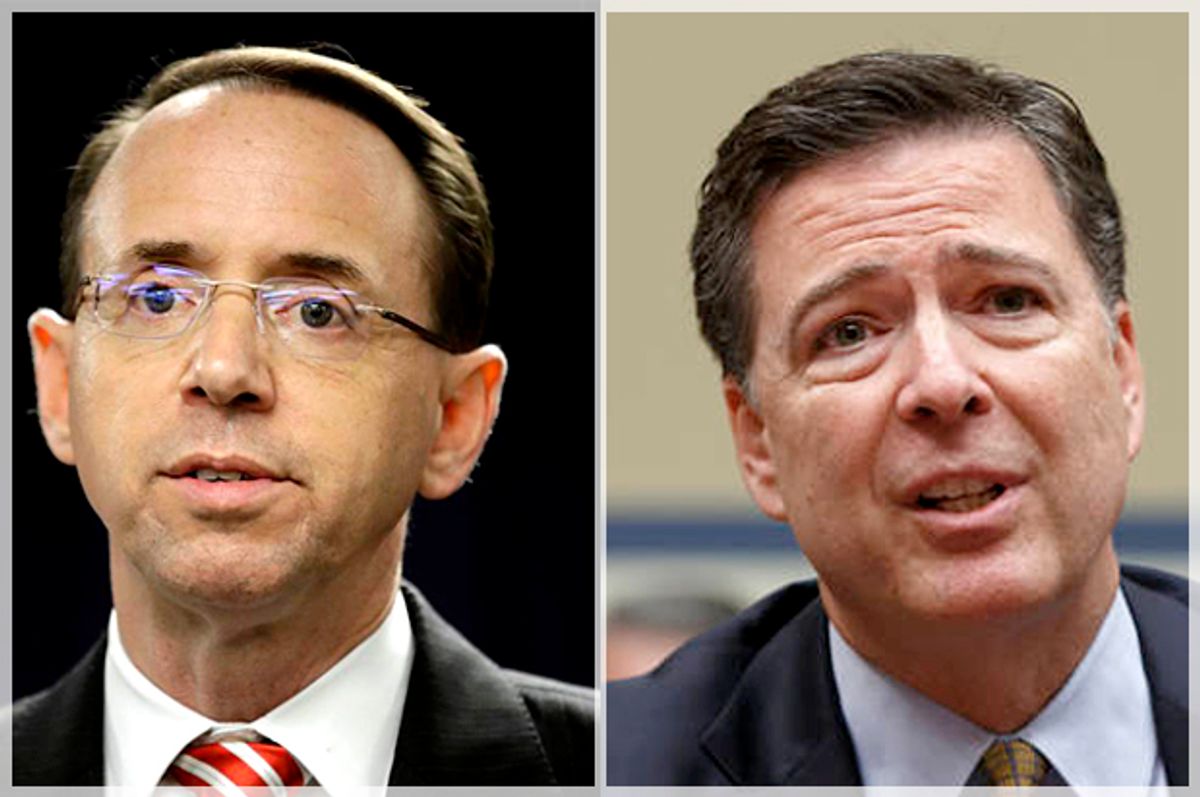 When James Comey stood before the cameras last July to announce that the FBI would not be charging Hillary Clinton with a crime — and then went on to describe all the ways in which she'd been "reckless" with her email server management and handling of classified information — most criminal justice experts were appalled. When a person is cleared of wrongdoing, law enforcement generally does not use information gleaned in the investigation to then smear the character of the investigation's subject. That would give the authorities even greater power than they already have and interferes with the constitutional guarantee of due process.

Comey's press conference and subsequent testimony before the Benghazi committee hearings on the tragedy in Libya were criticized by both sides of the aisle for different reasons. Republicans were more than fine with character assassination. Indeed, they used it to excellent effect, particularly Donald Trump, who turned it into a rallying cry by repeatedly promising to put Clinton in jail once he became president.

Other Republicans were very upset that Comey failed to charge her with a crime and never saw Comey the same way again.

Democrats, on the other hand, were relieved that she wasn't charged, but the FBI director's imperious commentary raised many questions about his judgment. Throughout the campaign, this was a low-simmering controversy that erupted into a full boil 10 days before the election when Comey made the shocking announcement that the FBI had found more emails and broke with long-standing Department of Justice practice that prohibited its members from interfering in elections. We all know how that worked out.

James Comey is a Beltway dreamboat, handsome as a movie star, just dripping with integrity. Sure, he may have showboated a little bit but he did it in such an "aw shucks" Jimmy Stewart in "Mr. Deeds" sort of way. It was just part of the charm. His heroic reputation came out of an event during the Bush administration when he raced to the hospital in the dead of night to prevent the White House from carrying out nefarious plans. We didn't know the details until Comey himself told the story to an obviously dazzled congressional committee during his 2013 confirmation hearings for the FBI director role.

Democrats finally soured on him after Oct. 28, when he threw the election in Trump's direction. And Trump turned out to be very proud of the gallant Comey praising him to high heavens for making the "tough" decision to interfere in the election. Since then, both parties have had their reasons for making peace with the FBI director. Republicans remained suspicious of Comey for his unwillingness to indict Clinton when he had the chance — but throwing the election to Trump went a long way toward appeasing them. Democrats no longer saw him as a hero but felt that he was still better than anyone Trump would choose to replace him, particularly in light of the unfolding Russian scandal.

And if Comey really was the man of impeccable integrity he was reputed to be, there was a chance that he might recognize his culpability and take responsibility. But he was unrepentant about his behavior during the election, insisting in his testimony before the Senate last week that he had no choice but to break Justice Department rules in order to preserve the integrity of the Department of Justice. It sounded eerily like the Vietnam era trope "We had to destroy the village in order to save it."

You would think that all this would be a lesson to the Democrats, at least, that putting your faith in the allegedly impeccable reputation of any official is a mistake, particularly one with tremendous authority and power. That's why we have laws and rules and norms. But when it came time to fill the position of deputy attorney general under Jeff Sessions, they all fell in line behind another man with a sterling reputation who was touted as someone with tremendous personal rectitude: Rod Rosenstein, someone described by Senate Minority Leader Chuck Schumer as having "developed a reputation for integrity."

Senators all knew at the time that Rosenstein gave testimony before the Senate that he would be the man overseeing the Russian investigation. They asked him if he would commit to naming a special prosecutor and he told them, basically that he'd think about it. Two weeks ago they confirmed him in a 94-to-6 vote.

On Tuesday Rosenstein delivered a memo to the president laying out a case for James Comey to be fired and it was done. On Wednesday night,  The Washington Post reported that Rosenstein had threatened to quit when he heard the White House laying the firing at his feet, suggesting that it was not his idea to fire Comey (an action he didn't raise directly in his memo) and that when he delivered it to the president he didn't expect the memo to be used as the documentary basis for Comey's firing.

Now, previously supportive Democrats like Virginia Sen. Mark Warner say they regret their votes for Rosenstein and the calls for a special prosecutor are reaching a crescendo. Two weeks into the job, this new deputy attorney general has been dragged into the quicksand of the Trump administration and he's very likely to be sucked under right along with James Comey, Sally Yates and the others who have touched on this Russian investigation.

Rod Rosenstein was the longest serving U.S. attorney in the Justice Department before he took this post, and all federal prosecutors are political animals to one extent or another. Those like Comey and Rosenstein build their careers on a reputation for being straight arrows who cannot tell a lie (even if it isn't true.) But that particular type of renown seems to leave them ill-equipped to deal with today's politics. They appear to believe that their personal integrity grants them special license to circumvent the normal processes in order to hold others accountable for circumventing the normal processes and this just doesn't work. Their heroic images actually leave them vulnerable to manipulation by more devious political players. Their overweening self-regard leads them to believe their own hype.

Needless to say, nobody in American politics has ever had to deal with someone like Donald Trump and his reality-show administration, so one has to feel some sympathy for people who get caught in its maw. But both Comey and Rosenstein cut their teeth working on Whitewater investigations in the 1990s. The fact that both these men came out of those inane witch hunts believing their reputations for incorruptibility were honestly earned says everything we need to know about their political savvy. That the political establishment believed it, too, doesn't give one much faith that the lessons will be better learned this time.