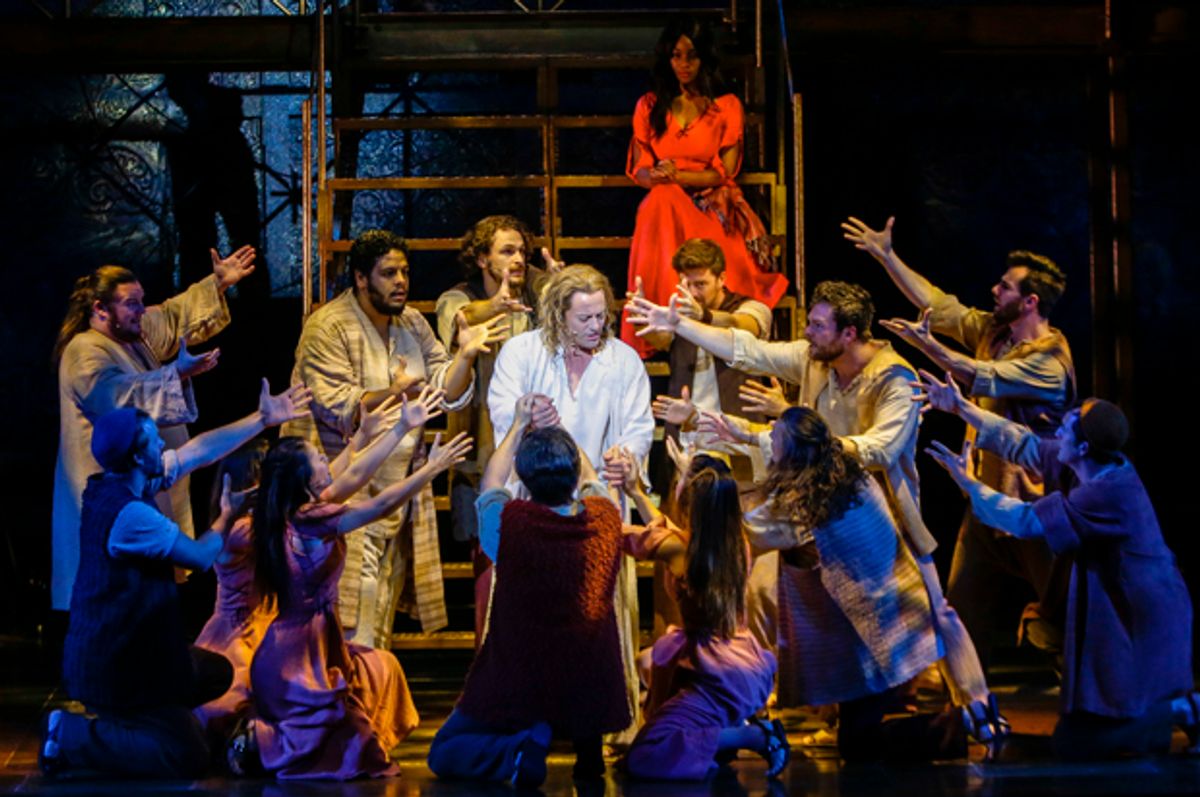 Yesterday during the television “upfront" presentations, NBC announced plans to broadcast Sir Andrew Lloyd Webber’s 1971 retelling of the Passion, “Jesus Christ Superstar,” as part of its live musical series. Scheduled for Easter Sunday next year, the broadcast will follow NBC’s other ventures into live musical performances, such as “Peter Pan Live,” “Sound of Music Live,”“The Wiz Live” and “Hairspray Live.”

Though no cast has been announced at this time, Variety reported that Marc Platt of “La La Land" will join NBC’s existing live-musicals production team, with original "Superstar" creators Lloyd Webber and Sir Tim Rice taking on executive producer roles.

Said NBC Entertainment chairman Robert Greenblatt, “As we continue to expand the profile of our live musicals, we are thrilled to be partnering with Andrew Lloyd Webber and Tim Rice to bring a new live staging of the iconic ‘Jesus Christ Superstar’ to NBC.” He continued, “Casting has just begun, but we want to fill out this classic show with as many recording artists as possible to give proper voice to what is the original rock opera score.”

While “Jesus Christ Superstar” — which tells the story of the days leading up to Christ’s crucifixion and resurrection through often intimate, often emotional songs — has collected praise at times, it also has weathered its fair share of criticism due to plot points that could be interpreted as anti-Semitic.

While most New Testament accounts spread the blame for Jesus' condemnation across a variety of parties (including the occupying Roman government that then controlled Galilee and Judah, the leading community of Jewish priests, puppet king Herod I and the area’s Jewish population), Lloyd Webber and Rice have been criticized for de-emphasizing the Romans’ role. Specifically, Pontius Pilate, the Roman governor, has a solo song that serves to humanize yet absolve him of blame while the Jewish priests appear to be conniving, sneering villains.

It’s a take on Christ’s death that has at least some basis in Christian sources, though one that has helped inspire millennia of Jewish discrimination, persecution and genocide and remains a sore and often dangerous subject to this very day. In the past Jewish groups have bristled at Lloyd Webber’s interpretation. It remains to be seen how they will react to NBC’s move. In light of the uptick in anti-Semitic violence and discourse tied to the election of Donald Trump as president, it is difficult to image the production will go forward without at least some protest about this very point.

Possible anti-Semitic resonances aren't the only cultural bear trap awaiting NBC. Overall, “Jesus Christ Superstar” forwards — and benefits from — a particularly emotional, permissive portrayal of Jesus' story, one strongly influenced by the free-love, countercultural movements of the late 1960s. Jazz dance, multiethnic, scantily clad chorus members and '70s-appropriate slang come along with the package. It’s a vision of the Christ story that could run afoul of America’s powerful religious right. A positive, empathetic portrayal of prostitute Mary Magdalene as a woman clearly romantically in love with Jesus could also be a sore spot for the very vocal population of Christian conservatives.

Further, progressives and more secular Americans may take issue with a major broadcast network signing up to beam out a new staging of the Christian origin story. At a time where hard-line religious influences appear to be taking over the government (and drawing considerable ire in the process), it seems somewhat off tone for a normally nonsectarian company like NBC to stage a production that explicitly celebrates Christianity.

But that’s not all! There are casting pitfalls to consider. Historically, Judas Iscariot, the apostle who betrayed Jesus, has been played by African-American men in “Superstar” productions. When actor Ben Vereen held the part in the 1971 Broadway production, it was a sly bit of colorblind casting. Today, giving the role of Christ’s betrayer to a black man could be explosive in a time where America is having profound and necessary conversations about the way the white establishment views black men as possible killers or living weapons by default. Using non-Jewish people for the cast of mostly Jewish characters — including the role of Jesus — may also become a talking point.

Given the recent uproar attached to the less-than-nuanced portrayal of suicide in Netflix’s “13 Reasons Why,” it’s easy to imagine that the emotional scene when Judas hangs himself to a throbbing rock backing track might draw some detractors.

Finally, there’s this: Despite a few fun sequences, “Jesus Christ Superstar” is a colossal bummer. Long, looping ballads take up good portions of its score, the title character often comes across as self serious and two of the three leads die painfully onstage. Those looking to get their musical-theater jollies at home — say, your mom — won’t find much to enjoy outside of some of the now-dated chorus numbers. It’s a worthy musical but one perhaps too serious and too nuanced for families not prepared or interested in it.

All these possible problems, and ones that have gone undressed here, beg one serious, crucial question: Why not do “Cats”? Everybody loves “Cats”! It’s a musical — about cats! No problems there.