Why '70s soft rock came back, and why it's not going anywhere

How yacht rock went from punchline to cultural touchstone 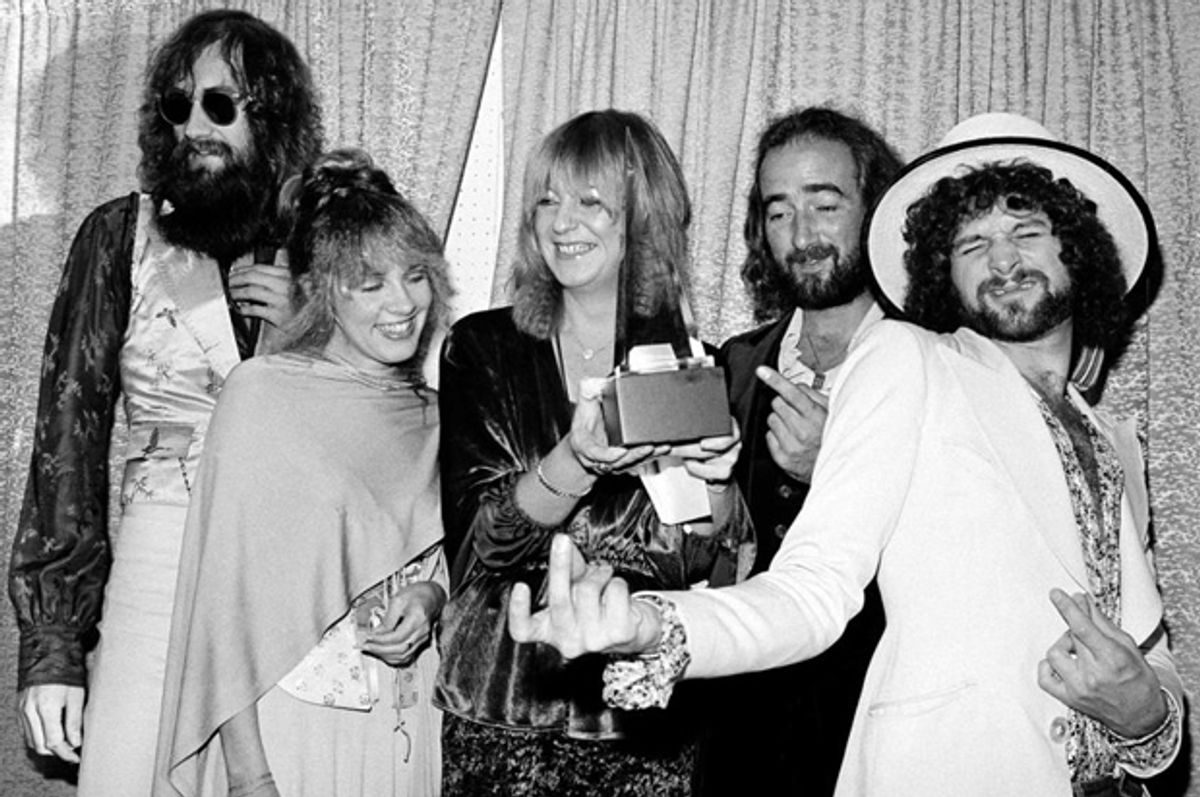 When One Direction's Harry Styles performed on "Saturday Night Live" in mid-April, he premiered a brand-new song, "Ever Since New York." Days prior to the performance, some facets of the 1D fan base suspected the tune might be a reference to his ill-fated romance with Taylor Swift. After "Ever Since New York" aired, however, the song attracted a storm of attention for a different reason: People accused Styles' tune of ripping off "Baby Blue" by power-pop legends Badfinger. The outcry was so great that the son of late Badfinger drummer Mike Gibbins posted a video to YouTube  comparing the two.

It remains to be seen whether the kerfuffle will linger; after all, "Ever Since New York" also echoes the acoustic-driven epics favored by U.K. bands such as Oasis and Travis. However, Badfinger wasn't the only classic group Styles has been linked to in recent weeks. "Sign of the Times"— the majestic first single from his self-titled debut solo album, due out May 12 — has been favorably compared to both Mott the Hoople and David Bowie, while "Sweet Creature" has been accused of resembling the Beatles' 1968 song "Blackbird."

Styles' retro-rock looting isn't an isolated incident, however. Father John Misty's lyric-focused album "Pure Comedy" has the sparse, piano-heavy tilt of Elton John records such as 1975's "Captain Fantastic and the Brown Dirt Cowboy." Indie rockers such as Foxygen, Mac DeMarco and the Lemon Twigs also are heavily indebted to the more kaleidoscopic end of '70s rock. The latter act has been drawing special attention for its nods to ELO, Big Star, Todd Rundgren and Harry Nilsson. And then there are the dozens of artists ripping off '70s looks — signifiers such as wild 'n' wooly facial hair, rakish suits and loud-patterned shirts.

Interestingly enough, the aura of cult cool around power-pop legends Big Star and newly minted Rock & Roll Hall of Fame inductees ELO has started to rub off on an unexpected niche: '70s soft rock artists. These acts have been cropping up as major sonic inspirations in 2017.

Aimee Mann's latest album, "Mental Illness," takes cues from soft rock icons Bread and Dan Fogelberg. "The musicianship is fantastic; the singing is beautiful," Mann said of the former in a recent Salon interview. "It’s very soft, but it’s kind of ballsy in how it just is like 'Yup, I’m fucking soft, and I’m singing soft songs about how I would do anything to keep you' or 'Go ahead and do whatever you want, and I’ll be here forever.'"

Speaking to Entertainment Weekly, country star Zac Brown namechecked folk singers Jim Croce and James Taylor as influences on the Zac Brown Band's "purist, back-to-our-roots record," "Welcome Home." And 15-year-old Brennley Brown, a contestant on the current season of "The Voice," was lauded by Shania Twain and Gwen Stefani for her version of Linda Ronstadt's "Long, Long Time." Even movies are getting into the act: The new "Guardians of the Galaxy 2" features Looking Glass' pebble-smooth “Brandy (You’re a Fine Girl)," while the first movie in the series utilizes Rupert Holmes' smugly clever "Escape (The Piña Colada Song)" to great effect.

This resurgence across genres and generations can arguably be attributed to Fleetwood Mac, which has enjoyed a popularity surge in recent years and remains an object of cultural fascination, and the ongoing "yacht rock" phenomenon immortalized in (and popularized by) a video series of the same name. In general, parents and kids also share a love of classic rock: Nielsen named the genre the "format of the summer" in 2016, while the organization's year-end music statistics from last year ranked classic rock at No. 7 among listeners ages 18-34. There's no longer the wide chasm between the musical tastes of different generations.

But what else is driving this soft rock surge?

For starters, it's a byproduct of the ongoing, renewed interest in the '90s, another decade whose music feted the '70s. In addition to the abundance of tribute albums to acts such as the Eagles (1993's "Common Thread: The Songs of the Eagles") and the Carpenters (1994's superlative "If I Were a Carpenter"), Foo Fighters did a dynamic cover of Gerry Rafferty's "Baker Street" in 1997. A slew of then-modern rock and indie bands covered gooey '70s classics on the compilation "20 Explosive Dynamic Super Smash Hit Explosions."

But unlike the '90s — when some (although not all) of these '70s homages were cloaked in irony or kitsch — today's soft rock references are 100 percent sincere. That's because attitudes have softened toward music that's considered uncool. Just look at Journey, a one-time critical punching bag who's had the last laugh on everyone by touring steadily and being inducted into the Rock & Roll Hall of Fame. Long-held biases against the band have melted away with time, which has allowed people to listen to the music with fresh(er) ears and find its merits. The same phenomenon can be applied to soft rock.

Yet there's also novelty attached to the latter genre, in the sense that there's a depth and warmth to this music that's antithetical to the digital sheen evident in today's pop and rock music. There's nothing inherently wrong with this approach, but modern production can feel monotonous and sterile — especially in mainstream pop — which is fatiguing. Soft rock just sounds different because of how it was crafted and produced, which contributes to its appeal.

And then there's the oft-discussed vinyl boom, which has made records widely available again. Many of these soft rock totems are languishing in dollar bins or gathering dust at garage sales, making them far more affordable than bigger acts such as Dylan or Fleetwood Mac. Soft rock, as a genre, is still ripe for discovery.

Perhaps because of this renewed interest, '70s icons are also having a banner year. Hall & Oates are currently on an arena tour with Tears for Fears, while James Taylor is touring this summer with Bonnie Raitt. The forthcoming Classic East and Classic West festivals, meanwhile, boast a formidable lineup featuring Fleetwood Mac, The Eagles, Steely Dan, Journey, Earth Wind and Fire, and The Doobie Brothers.

And then there's Michael McDonald, whose work with the Doobies is still beloved. The Yacht Rock patron saint popped up during Thundercat's set at Coachella to perform "Show Me the Way" — a song the pair wrote with fellow smooth-rock sailor Kenny Loggins — and hopped onstage with Solange back in March for a cover of the Doobie Brothers' "What a Fool Believes."

When Noisey recently asked McDonald why so many younger artists were embracing his records now, he shared a plausible theory. "I think a lot of that is each generation tries to separate itself from the generation before," he says. "I remember a friend of mine I was writing with saying to me, 'Yo man, with all due respect, you need to be more '80s and less '70s,' and I remember thinking 'God, I'm already old.' And this is the '80s! So now, when I see radio stations that are like, nostalgic '80s radio stations, I laugh because, shit, I was already old in the '80s — much less now. But it takes about a good 30, 40 years for people to all of a sudden rediscover what you might have been doing back then."

McDonald is right in the sense that all of this '70s rock feels like hidden gems, sonic treasure to be excavated. But what's interesting (and gratifying) is that in 2017, many of these '70s rockers aren't interested in coasting on their legacies.

McDonald himself is releasing his first record in nearly a decade, "Wide Open," in September, and it's a strong distillation of his jazz, R&B and blues roots. Fleetwood Mac's Lindsey Buckingham and Christine McVie are teaming up to release a self-titled record, "Lindsey Buckingham/Christine McVie." The ever-chameleonic Todd Rundgren also has a new record, "White Knight," due this month featuring collaborations with Robyn, Trent Reznor and Daryl Hall.

Of course, in certain circles, a fascination with '70s soft rock is omnipresent. Back in 2005, the tribute record "Friends and Lovers: Songs of Bread," for example, lovingly canonized the band and its gauzy songwriting. Cultural elevation is always happening, whether or not there's mainstream critical mass around it.

Not everyone is quite on board with the genre's resurrection and it's clear that soft rock still has some work to do to garner across-the-board critical respect. Only last year, Bread's David Gates — the author of one of the most touching songs in soft-rock history — was nominated for the Songwriters Hall of Fame. He didn't make the cut.