When faced with a potential constitutional crisis, National Review pulls out the Clinton bogeyman and bashes away 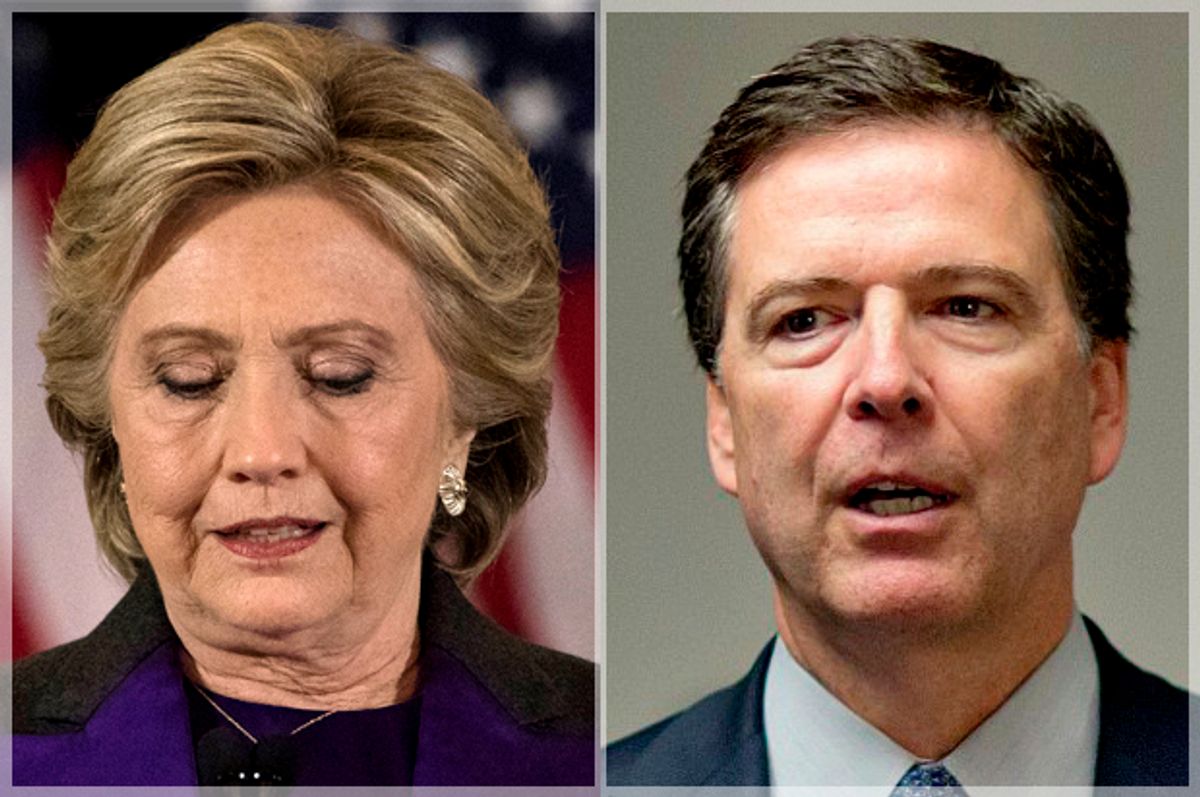 Let's get this week straight. On Tuesday the president of the United States, Donald Trump, fired FBI Director James Comey because Trump wanted to end the agency's investigation into possible collusion between his campaign and the Russian government to hack emails of Hillary Clinton campaign staffers — and because the FBI director may not have pledged loyalty to him personally.

So you can see how this is all Clinton's fault.

Hold on to your hats because National Review's Michael Barone is about to take us on a wild ride that somehow proves that Deputy Attorney General Rod Rosenstein — whose now-famous memo was used by the administration as its pretense for firing Comey — couldn't have been duped by Trump, because Democrats!

Who is Rosenstein? He started off as a career Justice Department lawyer and was appointed U.S. attorney for Maryland by George W. Bush in 2005. He was one of only three — out of 93 nationwide — U.S. attorneys kept on during the Obama administration. This could not have happened without the approval of Maryland’s Democratic senators, Barbara Mikulski and Ben Cardin.

Both of them are paragons of integrity with long experience in the swampland of Maryland politics. Mikulski was elected to the Baltimore city council in 1971 and to Congress in 1976. Cardin was elected to the state legislature in 1966 and to Congress in 1986. Both saw successive Maryland governors, Spiro Agnew and Marvin Mandel, ousted from office under criminal charges. Both surely wanted a competent and apolitical federal prosecutor and believed they had one in Rosenstein.

Did you catch that? Mikuski and Cardin are from Maryland. Two Maryland governors were "ousted . . . under criminal charges" in the 1960s and 1970s. Something is clearly afoot! Of course, there's a bit of obfuscation here: Agnew was, quite famously, a Republican. A Republican vice president. Richard Nixon's vice president, to be precise.

Pardon me, but that makes this Barone line really really funny: "For some Democrats and journalists, every Republican military initiative is Vietnam and every possible scandal Watergate."

And yes, Mikulski and Cardin asked for Rosenstein — who at the time of Trump's inauguration was the longest-serving U.S. attorney to stay on at the Justice Department. That is true.

But it also means exactly nothing. As Trump has said himself, he wanted to fire Comey, memo or no memo. “I was going to fire Comey," Trump told NBC on Thursday. "When I decided to just do it, I said to myself, ‘You know, this Russia thing with Trump and Russia is a made-up story.'”

"Rosenstein will be in charge of that, seeing as Attorney General Jeff Sessions has recused himself," Barone wrote, ignoring that Sessions wrote a memo recommending that Trump "remove Director James B. Comey . . . to lead the great men and women of the FBI" who are investigating Russia connections. That doesn't sound like much recusing was going on there.

But enough about the Trump mess. Let's do some Clinton bashing!

Barone's entire piece goes back to the Republican bugaboo of the infamous tarmac meeting between Bill Clinton and former Attorney General Loretta Lynch last year. In this conservative world, Bill Clinton told Lynch to refuse to prosecute Hillary Clinton, who is obviously a traitor to America because of her "illegal . . . e-mail setup, with which she sent easily hackable classified information," Barone wrote. Under this scenario, Comey's hand was forced; he couldn't recommend charges because Lynch wouldn't prosecute because Bill whispered sweet nothings in her ear and/or threatened her with a Vince Foster-like death. But the Department of Justice acts independently of the FBI, and Jeff Sessions suggested way in March that he might examine the operations of the Justice Department under President Obama. And Sessions can still charge Hilary Clinton, even though Lynch didn't do so. Let's go back to Barone's speculation:

One can understand why Comey could have felt miffed when Lynch left him publicly exposed as the one who would decide whether the putative Democratic presidential nominee would be criminally prosecuted. If an FBI director shouldn’t decide who gets prosecuted, as Rosenstein correctly argued, he certainly shouldn’t have to make that call when the decision could determine who will be elected president of the United States.

That didn't stop Comey from telling Congress in October about the "Hillary Clinton emails" in an infamous letter that likely influenced the outcome of the presidential election. Even in his more recent testimony before Congress, Comey made out those emails to be more than they actually were.

Trump has said that he doesn't care about "locking her up" anymore — treason or no treason. And that raises the big million-dollar question for conservatives: If Sessions doesn't bring charges against Hillary Clinton, does that mean that Bill Clinton's meta-arm is reaching through time and space to warmly hold Session's forearm, telling him — in shared Southern drawls whispered through a warm Phoenix International Airport breeze — that Hillary shouldn't be arrested? And how disappointed will Barone and every other veteran Clinton basher be when that happens?

Unfortunately Barone made a fatal flaw in his argument: He filed the story way too early because his claim that this "makes mincemeat of Democrats’ cries that Trump fired Comey to kill any investigation of Russian collusion in the presidential election" is completely blown out of the water when you actually look at the things that Donald Trump and the White House have actually said about why Comey was fired.

But let's once, for old time's sake, just down one more shot of anti-Clinton juice. After all, itt fits in perfectly with a president who, as of Thursday, won't stop talking about the presidential election. Here's Barone:

The mess continues, as Democrats howl against the removal of an official whose removal they demanded up through lunchtime Tuesday and continue to search, Ahab-like, for evidence that Russia somehow stole the election.