A malicious child acts out: Donald Trump, Jim Comey and the toxic triumph of "kidult" culture

Trump is like an overgrown, evil Dennis the Menace — who embodies our infantile consumer culture at its worst 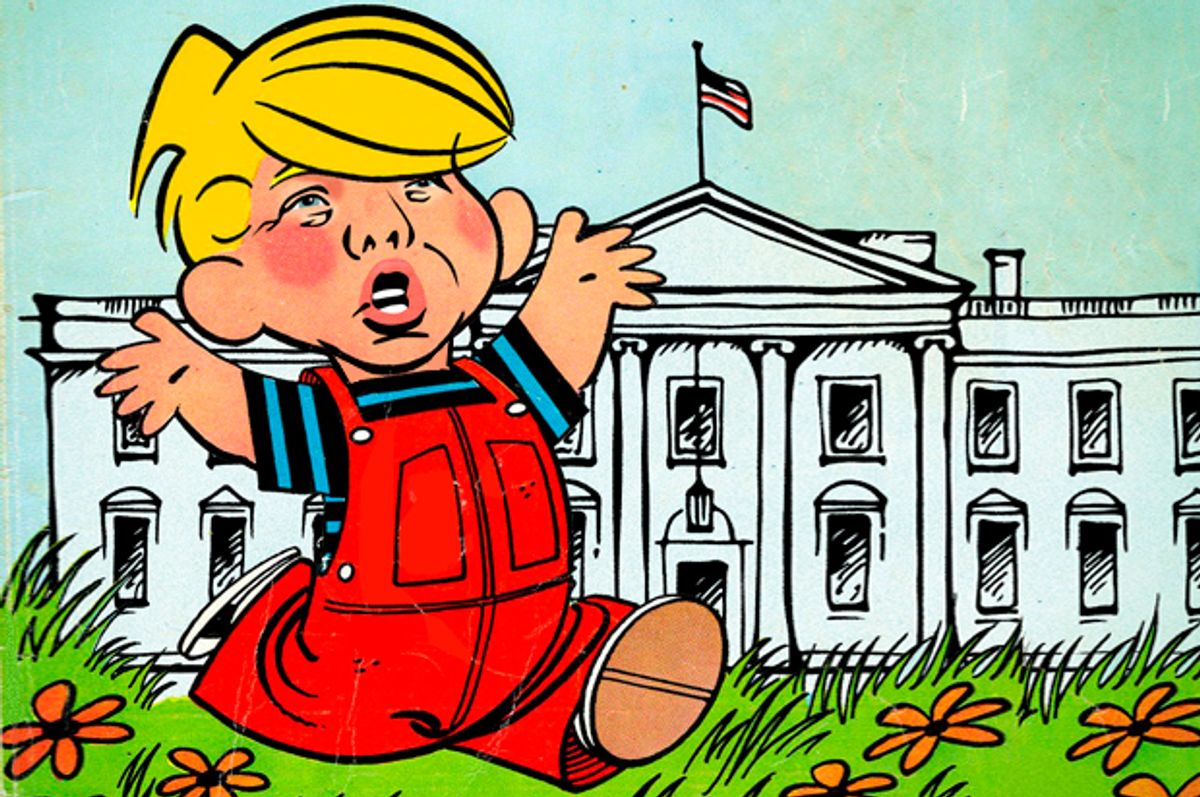 Explanations abound for President Donald Trump’s shocking, or pseudo-shocking, decision to fire FBI Director James Comey this week. Indeed, there are too many of them. It was because Comey had bungled the so-called investigation into Hillary Clinton’s so-called email scandal. It was because Comey and his FBI team were closing in on evidence of the Trump campaign’s collusion with Russian intelligence last year.

This was a decision based on the recommendations of Deputy Attorney General Rod Rosenstein (a sudden celebrity!) and his boss, the appalling Jeff Sessions — who isn’t supposed to be involved with the Trump-Russia inquiry in any way. Or it was a decision the president made on his own and had contemplated for weeks, because Comey was disloyal or was too much of a showboat or “was not doing a good job.”

I used the term “pseudo-shocking” above because there’s really no more room to be surprised by any asinine, impulsive, media-trolling stunt this president pulls. If a troubled, sadistic child pulls the wings off butterflies or torments a kitten, one should certainly express disapproval and attempt to mete out discipline. But it kind of rings hollow to act astonished and announce that you’ve never heard of such a thing before.

In a column posted earlier this weekend, Salon’s Danielle Ryan makes an interesting case that all the overlapping and contradictory explanations for Trump’s recent conduct are needlessly complicated, and that l’affaire Comey may be much simpler than it appears. Whatever you make of Ryan’s larger argument — she remains skeptical that the Russian connection is any big deal, for example — I think she’s onto something when it comes to Trump’s behavior and what he represents. He tossed aside Jim Comey on impulse, the way an angry child throws away an unsatisfying toy or turns on a friend; he didn’t really think about what would happen afterwards, and every subsequent explanation is just made up and tacked on.

It has frequently been observed that Donald Trump acts like a child: He has exceptionally poor impulse control, cannot reliably distinguish fantasy from reality and appears not to grasp that human actions are not isolated events but exist in a chain of causes and consequences. But the emergence of such a figure is itself viewed with childlike wonder, as if he were mysterious or miraculous and had no history. How in the world did we wind up with a 70-year-old child as president of the United States?

I would argue that Trump’s childish nature not only helps explain aspects of his behavior that otherwise seem incomprehensible, but that it lies at the heart of his appeal — and indeed his meaning. Donald Trump is the accidental and profoundly ironic embodiment of a culture that has infantilized itself, a culture that fetishizes childhood as an ideal state of wonder, joy and innocence to which all adults long to return. The fact that many of the people who most enthusiastically embrace the ascendant culture of kidulthood — the affluent, educated “elites” of the coastal cities and college towns — are also the people most likely to abhor Donald Trump is but one of the many conundrums of this moment.

Proposing to end illegal immigration by building a giant wall along the southern border is a self-evidently childish solution to an imaginary problem — exactly the kind that gets abandoned when it proves too difficult. When my son was about five years old, he spent several afternoons trying to dig a tunnel the whole way across our backyard; he got three or four feet down before coming to grips with geological reality. Believing you can resolve a military conflict that has stymied several rounds of grownups through the overwhelming use of force — by “bombing the shit out of 'em,” for instance — is similarly childish, except that real people’s lives will be thrown away in large numbers even in a brief effort.

Refusing to accept photographs or statistics as actual evidence and searching for “alternative facts” to explain away unpleasant occurrences are pretty much defining characteristics of childhood. Every child grows up terrified and/or fascinated by the “fake news” and conspiracy theories that run rampant on the playground: In my own youth it was widely reported, via the social media outlets of the day, that one popular brand of bubble gum was made from spider eggs. An old friend, somewhat younger than me, once told me that after he had worked out how implausible that was — why would they bother? It sounds expensive! — he used the spider-egg fallacy to rebut some clown who was going around telling everybody that Darth Vader was actually Luke Skywalker’s dad.

Some wild childhood theories turn out to be true, and if Donald Trump is no relation to the Skywalker clan he might be Harry Potter’s unacknowledged mutant stepbrother, who spent much too long in that cupboard under the stairs. What I mean by that is Trump could not possibly have emerged in any other era — in one when the condition of adulthood was seen as necessary or desirable in a political leader, for instance.

There were many obvious differences between Trump and Hillary Clinton, and I don’t mean to downplay the significance of the most glaring one, which clearly played a role in her defeat. But she behaved like an adult throughout the campaign, since she had no choice: For better or worse, she is one. Trump has never acted like a grownup throughout his many decades in the public eye, and surely wasn’t going to start now. So the whole thing played out like a malicious family sitcom with a stinger ending, and we’ve all seen those: In a contest between Dennis the Menace and his mom — to cite a pop-culture reference so ancient Trump himself will recognize it — which of them will be humiliated, and which will emerge smirking and victorious?

Until very recently in historical time, childhood was viewed with bemused tolerance, at best, throughout the Western world, while actual children were often shunted aside. Children of the wealthy and even the middle class were outsourced to be raised by others as much as possible; children of the poor were mostly left to fend for themselves between the day they learned to walk and the day they were sent to work. Even as schooling became more general during the Industrial Age, the cultural products designed for children were anodyne, moralistic and legendarily boring, which is why pioneers like Lewis Carroll or E. Nesbit stood out so much. J.R.R. Tolkien’s “The Hobbit,” published in 1937, changed the course of children’s literature forever because it refused to condescend to juvenile readers and assumed an appetite for myth, tragedy and grand adventure.

Since about that time, and especially since the “youth culture” revolt of the 1960s, for which Tolkien’s “Lord of the Rings” became a text of almost biblical importance (much to his chagrin), we have seen an extraordinary liberation of the childhood imagination. More accurately, we have rediscovered it or recognized that it was always there and plays an enormous role in the shaping of human personality. I’m not remotely arguing that any of that is a bad thing — certainly not when it comes to actual children, nor when it comes to adults celebrating and enjoying the aspects of childhood we all carry with us throughout our lives.

But this enormous cultural shift in the understanding of children and childhood came with an unintended long-term consequence in late-capitalist consumer culture, and the squishy, turdlike end point of that process, at least right now, is President Donald Trump. Indeed, one could quarrel with my use of the word “unintended,” since marketing and advertising, over the last few decades, have prospered by shamelessly appealing to the most infantile, narcissistic and acquisitive urges — those that typify early childhood and remain just under the surface after that. If those enterprises did not deliberately set out to turn us all into overgrown electronic-cocoon children who search for immediate gratification around the clock and wail whenever we don’t get it, they accomplished it with great efficiency.

A number of cultural streams had to come together to devalue the dominant conception of adulthood — not completely or uniformly, but to a significant degree — and replace it with kidulthood, an awkward second childhood or imitation childhood. As the old tropes of grownup-ness — the businessman, the housewife, the factory worker, the bridge club and so on — came to seem outmoded or ridiculous, and as the American workplace became increasingly dominated by stultifying service jobs and the perma-collegiate atmosphere of the technology sector, one’s identity as a consumer became the central aspect of adult existence.

That development was already coming into view by the late ’60s, when Guy Debord captured it with uncanny prescience in the Situationist manifesto “Society of the Spectacle.” To some extent it was predicted by Karl Marx more than a century earlier, who perceived that eventually the major Western economies would transform themselves from being a zone of production to a zone of consumption. But the suddenness and totality of the change were not foreseen by anyone, and we are only beginning to reckon with it.

I recognize that it’s going way too deep into get-off-my-lawn territory to complain that everybody is on their damn devices all the time, and nobody even has to go outside to get a pizza anymore. The network of infotainment and acquisition that holds us all in its grip is not purely or entirely a passive experience, any more than childhood is. That’s too simple: It contains other possibilities, some of which are real. Indeed, one of the secrets to Bernie Sanders’ unexpected success, in my view, is that he appealed to the millennial generation — the first one to be born and raised inside the information economy — precisely because he seemed to disrupt its dominant economic and cultural narrative so dramatically. To use the relevant cliché, the fact that Bernie was from another generation and another world was a feature, not a bug.

What I’m suggesting is more like a powerful analogy: Children are like consumers, in some ways, and adults who are primarily consumers have turned themselves into imitation children. Gamergate zealots and fake-news entrepreneurs and alt-right trolls and Redditors who “solve crimes” from the sofa are not the problem in themselves; there have always been people who lie or manipulate others or waste everybody’s time with crackpot ideas. The deeper problem is that as we have collectively slid backward into a fake childhood where we can fill any supposed want with a few clicks and an optimistic credit-card issuer -- where we believe that is our most important right -- we don’t know how to control those people, or control for them, or control ourselves.

It’s tempting to say that since Trump is only president today thanks to a statistical fluke, that proves most Americans are still OK with adult leadership and it was only the malignant, malicious kidults in flyover country who fell prey to his idiotic magical thinking. Tempting but too easy. Trump was so horrifying, and so alluring, because he is an unrepentant rebel child dressed as a man who appeals to the most childish impulses in the American soul. Build the wall! Drain the swamp! Until it's hard; then don't.

Even those of us who would never have considered voting for him could feel it, and couldn’t look away. I don’t believe in fate in the classical sense, but the hand of fate was heavy in last year’s election. Our national second childhood conjured up Donald Trump, and we couldn’t wish him away. Facing that reality, and learning how to grow up again, requires dealing with him first.