Donald Trump is repeating Obama's errors in dealing with Turkey's Erdogan: But there is another way forward 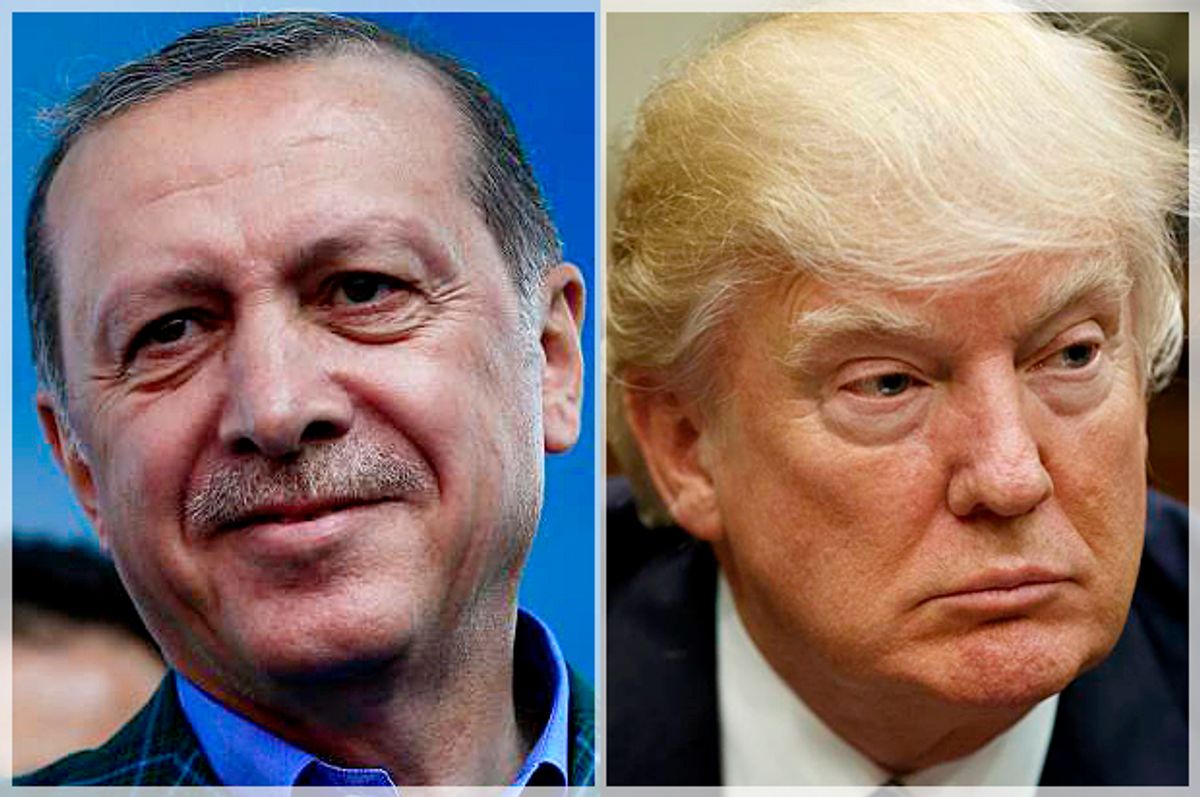 In June 2010 former President Barack Obama met with then-Turkish Prime Minister Recep Tayyip Erdogan on the sidelines of the G20 summit in Toronto. It had been a difficult spring for U.S.-Turkey relations.

In mid-May the Turks and the Brazilians had announced that they had struck a deal with Iran that undercut American efforts to negotiate a nuclear agreement with Tehran. A few weeks later Israeli commandos had boarded a Turkish-flagged vessel that intended to run Israel’s naval blockade of the Gaza Strip. In the melee that ensued, eight Turks and a Turkish-American were killed. The Turkish response was swift and rhetorically harsh — calling the incident “Turkey’s 9/11” and threatening a naval confrontation with Israeli warships in the eastern Mediterranean. Then in June the Turkish government had voted against U.N. sanctions on Iran in the Security Council, once again undercutting the United States.

Obama had made one of his first foreign visits to Turkey in April 2010, when in an address to the Grand National Assembly, he spoke eloquently about the values and goals shared by the two countries. (But by July 4, his advisers were wondering why Turkey was “not acting like a NATO ally.”)

The tension was eased considerably when Obama and Erdogan cleared the air during that June private meeting in Toronto and agreed on a way forward for Turkish-American relations. Over the following two and a half years, relations were generally cooperative and constructive, especially during those exhilarating days of the Arab Spring, which saw the fall of leaders in Tunisia, Egypt and Libya.

The encounter at the G20 summit was critical in the development of the Obama administration’s approach to Turkey over the next seven years. Differences between the countries would be settled privately, out of both respect for Turkish sensitivities and concern that a backlash in Ankara would complicate American foreign policy. It was a reasoned, respectful and pragmatic approach. It was also a mistake.

Erdogan, now Turkey’s president since August 2014, will visit Washington on Tuesday for his first face-to-face meeting with President Donald Trump amid tension over the White House’s decision to arm the Syrian Kurds of the People’s Protection Units (the YPG). This group has worked closely with the Pentagon in the fight against the self-declared Islamic State and will be a significant part of the ground forces poised to take Raqqa, the so-called capital of ISIS. The YPG is also directly linked to the Kurdistan Workers’ Party (the PKK), which has been waging a war on the Turkish state since 1984.

The Trump-Erdogan meeting also comes a month after Turkey’s controversial constitutional referendum, which gave the president unprecedented powers. While the Turkish opposition was howling in protest and European observers were casting doubt on the fairness of the vote, Trump placed a congratulatory call to Erdogan. The White House took a lot of heat for that call, but there was a logic to it.

Once Erdogan, the Turkish state media and Turkey’s Supreme Electoral Council had announced that the amendments were narrowly approved, there was no chance the results would be reversed, no matter how much evidence of electoral chicanery the opposition could produce. Trump and his advisers no doubt sought to give Erdogan and the referendum the legitimacy it likely did not deserve, hoping it would constrain Turkish forces from attacking Washington’s YPG allies. It was all very Obama-esque, and it did not work. Erdogan pocketed the call, and a few days later Turkish forces were shelling YPG positions.

All kinds of ideas are running around Washington about how to deal with the contradictions of U.S. policy in Syria (by working with the YPG, the United States is supporting the enemy of a longtime ally) and how to deal with Turkey more generally. Authoritative voices have suggested the Trump administration insist on the resumption of the tentative peace negotiations between Turkey and the PKK that began in 2013 as a way out of this mess.

That sounds eminently reasonable, but given that Erdogan has only narrowly won his referendum — if he won it  at all — and has sought to appropriate the political terrain inhabited by the hard-core nationalist right, it will be difficult to move the Turkish leader back toward reconciliation in time for the final push against Raqqa. Fighting the PKK and the YPG, as well as beating up the United States for its relationship with the YPG, is just good politics for the Turkish president at this point.

It seems that the Trump team may be making the same mistakes as the Obama team did, which largely means relying on private assurances and low-key, behind-the-scenes encouragement. The secretary of defense, Gen. Jim Mattis, has spoken recently of “working it out” with the Turks. Maybe he can, but at this point no amount of American assurances about the nature of the YPG, the level of American influence over the group, the number of actual Kurdish fighters within the Syrian Democratic Forces and the role of the YPG in liberated areas of northern Syria is going to convince the Turkish leadership that their mistrust of U.S. policy is misplaced.

For Turks, it looks as if the United States is midwifing a terrorist state on their southern border. It is worth remembering that Erdogan and his advisers apparently believed that it was acceptable to blame everyone from the commander of U.S. Central Command to the director of the CIA, the U.S. ambassador and the director of the Middle East Center at the Woodrow Wilson International Center for Scholars for last July’s failed coup — simply because they could.

That outrageous rhetoric was met with public silence from the Obama White House, which first dispatched the chairman of the Joint Chiefs of Staff to Ankara to genuflect before Turkish Prime Minister Binali Yildirim, and when that did not work, sent Vice President Joe Biden made to express Washington’s regret and sorrow over the failed coup. None of that worked either. Erdogan’s dark rhetoric about the United States continued, and as the vice president arrived in Turkey, Turkish forces invaded Syria to blunt YPG gains there.

Trump has a more straightforward option: Use more vinegar than honey. When the Turks berate the United States for supporting "terrorists" — that is, the YPG — it would be worthwhile for the Trump administration to publicly remind Ankara that it has much to answer for in the development of jihadi networks in and around Syria. After all, when the Turks failed to cajole the United States into what would have been an extended military operation to bring down the Bashar Assad regime, they turned a blind eye to terrorists, who began using Turkish territory to fight in Syria. Over time, Turkish intelligence coordinated with some of these groups, though not the Islamic State.

In addition, whatever one thinks of the YPG — there tends to be too much romanticizing of Kurds in general in Washington — American officials have a good public case to make about military cooperation with the group, on the grounds that Turkey did not initially want to join the fight against the Islamic State. The choice the Turks made in the summer of 2014 to stay on the sidelines as the Obama administration went looking for allies against ISIS forced Washington into making common cause with the YPG. Would the United States prefer to fight alongside the second-largest military in NATO? Of course, but when Turkey dithered, deflected and declared that its priority was fighting the PKK, what choice did Washington have? Ultimately, you go to war with the allies you have.

No doubt there are risks to holding Erdogan publicly accountable. He will use tension with the United States to his political advantage at home. Yet Erdogan derives domestic political benefit from fractious ties with the United States in large part because the Obama administration has never held him accountable. There is anecdotal evidence that Erdogan worried about U.S. reaction to his various domestic and foreign policy excesses, but when those rebukes never came, or arrived only in private, he learned he could act with impunity.

Turkish leaders understand that Ankara’s ties with Washington are the most important relationship their nation has. The best evidence of this was the meetings Turkey’s chief of the general staff, the country’s intelligence director and Erdogan’s political adviser held with American officials last week seeking a “strategic relationship” with the United States. Given the value that Turks assign U.S.-Turkey relations, if Erdogan understands there are costs associated with complicating U.S. efforts to defeat the Islamic State, he may change course. That is why publicly holding the Turkish leadership accountable for the present state of bilateral relations and Washington’s ties with the YPG is a potentially effective way of keeping the Turks on the sidelines.

An argument could be made that a more-vinegar-than-honey approach with the Turks would drive Ankara closer to Vladimir Putin and Moscow, but that relationship has limits. The Turks have strengthened their ties with Russia because the Obama administration removed itself from the Syrian conflict. That left Erdogan with only one potential ally to try to secure Turkey’s interests in Syria. Still, the Turks are wary of the exercise of Russian power in their neighborhood. Also, Moscow does not have the economic resources to help Ankara out of its current (and accumulating) economic crisis. For all of Erdogan’s tough rhetoric about the United States and Europe, he will need both to help build a stable future for Turkey.

The Russians do provide an object lesson on how to deal with Turkey, however. Putin took a hard line with Erdogan after a Turkish F-16 shot down a Russian warplane in November 2015. Russia imposed sanctions on Turkish fruit and vegetable exports, welcomed the opening of a YPG office in Moscow and supplied weaponry to the group. The result was an apology from Erdogan and a more solicitous Turkish approach to Russia.

At the moment, the Turks fear the Russians; they do not fear the United States. A willingness to risk some additional tension in the bilateral relationship by publicly holding Erdogan accountable on various issues — Turkey’s threats to complicate the operation against the Islamic State; Erdogan’s purge of bureaucrats, teachers, judges, prosecutors, journalists; Ankara’s efforts to politicize the American judicial system over two high-profile cases involving Turks; the detention of Americans in Turkey; and the Turkish leadership’s outrageous rhetoric about the United States — would certainly get Ankara’s attention. To do otherwise would be to signal to the Turks that they can continue to abuse their own people, undermine U.S. policy and publicly disrespect American officials.