Novelist Richard Ford makes his nonfiction debut with a beautiful tribute, "Between Them: Remembering My Parents" 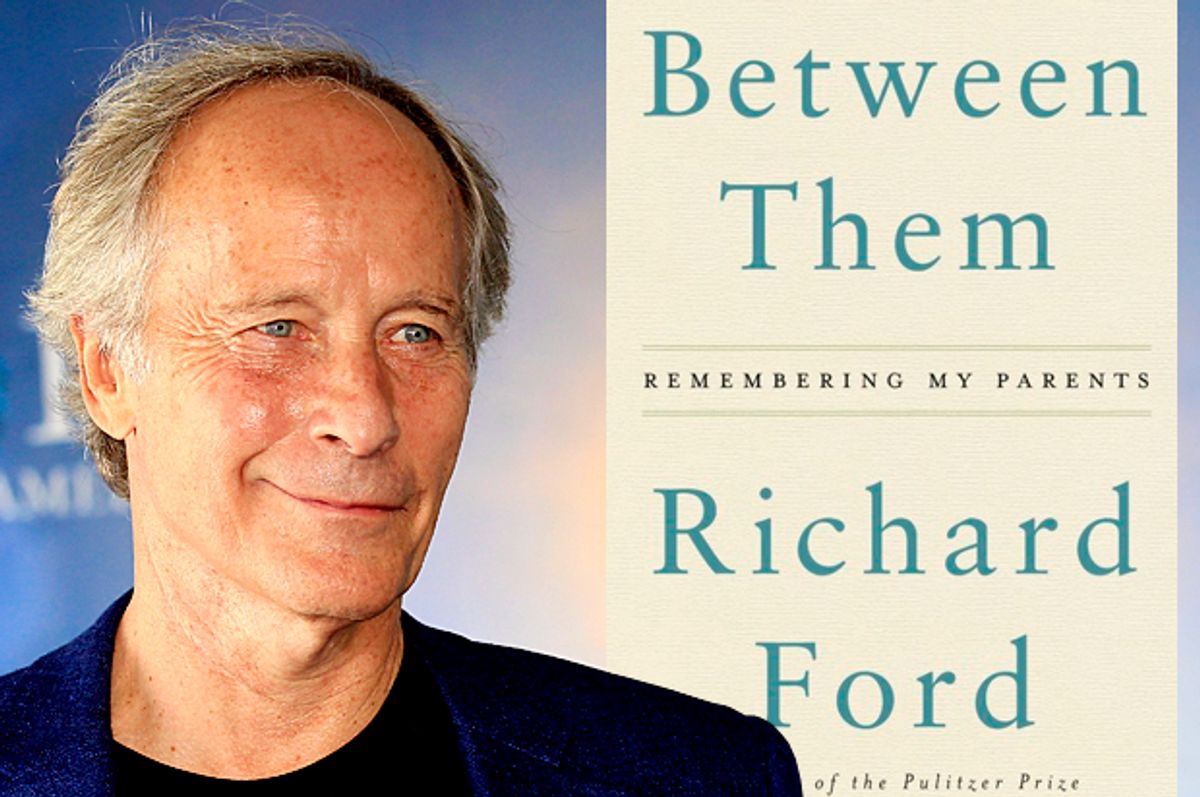 It is impossible to measure, even if many psychologists have made valiant attempts, the influence that parents have on their children. Familial upbringing is the result of a genetic lottery. Some children have the fortune and privilege of enjoying the love, kindness and focus of responsible and generous parents, while others have to suffer the cruel lifetime effects of neglect or abuse.

No matter the quality of character of parents, everyone assumes that their impact on the beliefs, behavior and emotional health of children, even as they become adults, is as large and unavoidable as a bomb crater. A chemistry professor, himself a fine father, once told me that parents pour mortar into the minds of their children. Eventually, the mortar will harden into concrete. For better and worse, it will always remain part of the person’s structure.

Richard Ford, one of America’s greatest novelists, has made his nonfiction debut with the taut and terse memoir "Between Them: Remembering My Parents." The aspiration of the project is to interrogate and explicate his parents as two distinct individuals with colorful lives — externally and internally — separate from their respective roles as mother and father, apart from their son.

Ford’s ambition is fascinating, and his aim important, because it is seemingly a challenge for anyone to emotionally align with the intellectual understanding of parental figures as fully developed human beings with their own thoughts, desires, frustrations, dreams and fears entirely disconnected from their children. In childhood, we develop a solipsistic relation with our parents. They are there when we need them or they are not. We assume that their behavior is always consequential of our actions. This is why so many children whose parents file for divorce blame themselves.

Ford brings his bottomless depth of insight and scalpel-sharp prose to the treatment of his mother and father with the suspicion that, although they loved him dearly and provided him with a joyful childhood, they loved each other even more. He not only lived — and even in their absence, lives — “between them.” He came between them.

It is typically in early adolescence that we escape the mentality that not only imprisons us, but also our parents, creating stereotypical teenage alienation. Ford recalled, as a 10-year-old child, a neighbor reprimanding him for riding his bicycle too fast on the sidewalk and then asking where he lives. When he pointed in the direction of the house, the neighbor remarked, “Oh, yes. Your mother’s the cute little black-haired woman up the street.”

“These were words that immediately affected me,” Ford wrote, “since they proposed my first conception of my mother as someone else, as someone whom other people saw and considered and not just my mother.”

Ford’s inspection of this early memory culminates in this wisdom: “The more we see our parents fully, after all, see them as the world does, the better our chances to see the world as it is.”

In a recent interview on NPR, Ford told Terry Gross that since he is a novelist he “deals in particulars.” "Between Them" is the particular story of his parents — at least his interpretation of it — and he had no intention of writing a manual for how to grieve for a lost parent, provide care for an ailing parent or assimilate the legacy of loving parents into a life without them — all of which he did and must do.

The particulars of Parker and Edna Ford are interesting in their ordinariness. Ford summoned his flawless novelistic eye for detail to rendering his knowledge and recollections of their lives. Parker was a traveling salesman, who without a “rich interior life” but with natural charm, seemed to find the profession best suited for him. He was a good father and a kind man who died unexpectedly of cardiac arrest one morning. His mother, in a state of shock, could not process what happened. Ford without knowledge of how to properly administer CPR, attempted to resuscitate his deceased father on the bed where his parents slept at each others’ side for decades.

Edna, a stay-at-home mom whose protection of her son and devotion to him was without limit, and who signaled to Ford what it meant to feel guarded and nurtured, worked at a hospital out of necessity after becoming a widow. She never seemed to recover into her full self but remained close to her son. When breast cancer began to slowly extinguish her life, she refused Ford’s direct care, having experienced the resentment the caretaker role created between her and her mother. Edna died with “courage and dignity,” but Ford does not believe that witnessing such strength in the fanged face of mortality confers those qualities to the observer — “only pity and helplessness and fear.” He reflected in wonder:

Does one ever have a “relationship” with one’s mother? I think not. We — my mother and I — were never bound together by much that was typical, not typical duty, regret, guilt, embarrassment, etiquette. Love, which is never typical, sheltered everything. We expected it to be reliable, and it was. We were always ready to say “I love you,” as if a time would come when she would want to hear ourselves say it to the other, only for some reason — as certainly happened — that would not be possible.

In the afterword, Ford explained that the memoir is, at its heart, a tribute to his parents. “I was fortunate to have parents who loved each other, and out of the crucible of that great, almost unfathomable love, loved me,” Ford wrote. “Love, as always, confers beauties.”

The result of Richard Ford’s tribute is a beautiful, moving and thought provoking book — a great book, really. It is not, however, the book that Ford promised when he described the importance of taking a clear and unromantic look at parents. At no point does he ever describe a single flaw he can attribute to his mother or father. Even his assessment of Parker as lacking a “rich interior life” is woven into a complimentary appraisal. Since no human being — no matter how altruistic, how kind, how compassionate — is without fault or foible, it would appear that Ford was incapable of living up to the task he assigned himself.

Like Ford, I grew up with two magnificent people as parents. I feel lucky and fortunate every day that they are still alive and that I can continue to say to them, and hear them say back, “I love you.” I can understand and appreciate why Ford refrained from any criticism in "Between Them." Because his mother and father were not celebrities or writers themselves, his memoir will exist as the only public documentation of their lives. To present anything unflattering about them probably felt like a betrayal. Above all, "Between Them" reads and feels like an extended and artistic act of gratitude.

So for many of us the full investigation of our parents will remain the exclusive property of our thoughts during our most private and quiet moments, something that haunts us late at night or flashes in our mind’s eye in a moment when a beloved parent says or does something that violates our admiration of them — something we try to forget but cannot and finally something love decides to forgive.

Given the abundance of the horror of child abandonment, neglect and abuse, maybe it is best for those children, like Ford, who reap the rewards of love — whose lives flourish with the animation of the “beauties” — to simply and most loudly say, “thank you.”