"Sgt. Pepper's" at 50: was it a concept album or an identity crisis?

The Beatles' psych-rock opus, receiving a lavish reissue in May, isn't what you think it is 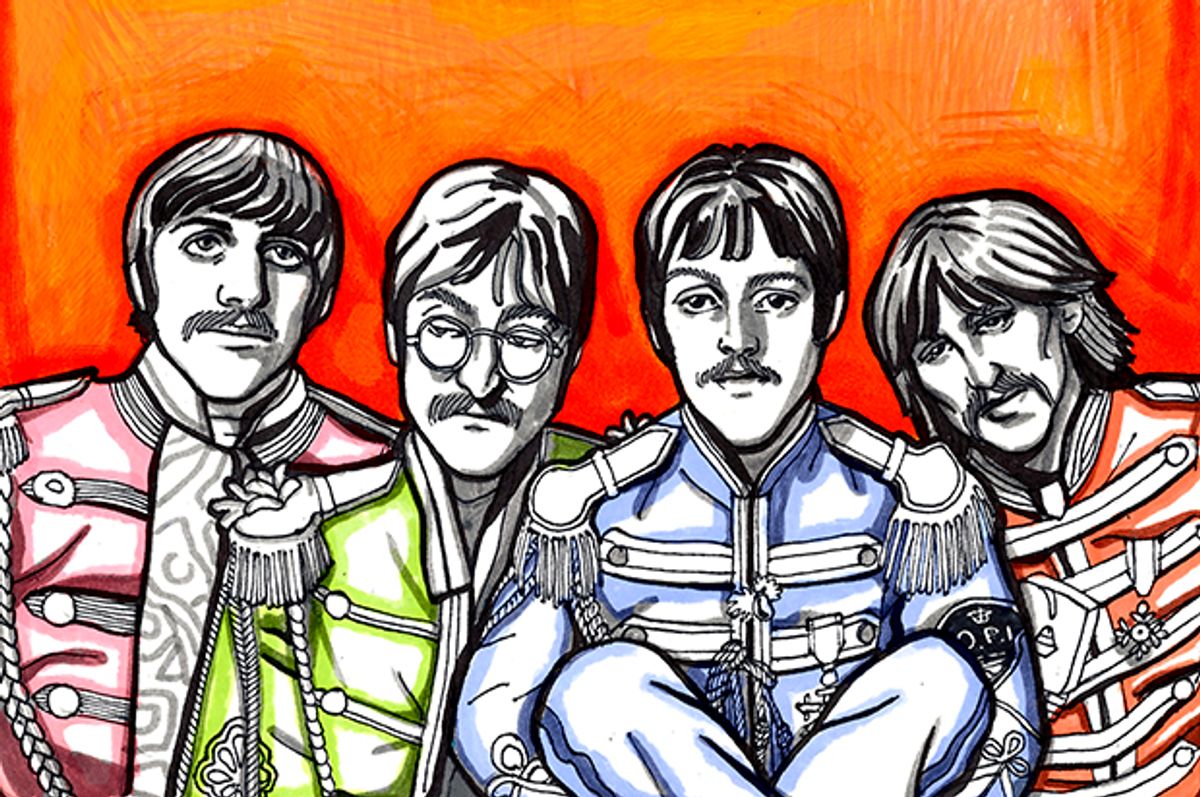 Beatles fans, get your credit cards ready: On May 26, the Fab Four is unleashing a lavish revamp of 1967's "Sgt. Pepper's Lonely Hearts Club Band" in honor of the landmark album's 50th anniversary. Among the notable features of the reissue are outtakes and alternate versions of songs from the vaults — including the "Pepper"-era double-A-side single "Penny Lane" and "Strawberry Fields Forever" — and a new stereo mix of the record that producers claim buffs up the painstaking vibe of the original mono mix.

"They were trying to create this immersive world that the stereo didn't have," Giles Martin, the man responsible for the new stereo mix (and, incidentally, the son of the late Beatles producer George Martin), recently told Rolling Stone about the original mono mixing sessions. "Nobody paid much attention to the stereo mix. What we did [today] was work out what they were doing in the mono mix and apply it to stereo."

It's a no-brainer that the Beatles team would choose to release a deluxe reissue of "Sgt. Pepper's Lonely Hearts Club Band." The LP has sold over 11 million copies in the U.S. alone and remains one of the band's most beloved records.

From an artistic standpoint, the album ushered in the Beatles' most expansive and experimental phase, and featured even more studio innovations. “On 'Pepper,' it was like starting over from scratch, getting down to the individual tonalities of the instruments and changing them," engineer Geoff Emerick told Guitar World. "They didn’t want a guitar to sound like a guitar anymore. They didn’t want anything to sound like what it was.”

It's almost impossible to calculate the influence "Sgt. Pepper's" had on modern pop music. Perhaps it is better to just say that there is a "before," and there is an "after."

What's more of a gray area: definitively calling "Sgt. Pepper's Lonely Hearts Club Band" a concept album. The Beatles themselves have gone on record expressing skepticism over the label, although musicologists, die-hard fans and academic scholars beg to differ. This dissension arises partly because everybody has a different idea of what makes a concept album, well, a concept album — something I discovered after idly asking my Facebook friends how they defined the term.

To some, thematic continuity was the key factor; to others, a well-developed story arc was crucial. Other people felt a concept album should possess a common thread between lyrics, while musical connections — whether in the form of variations on melodies or chords, or related tropes and patterns — are salient characteristics. How a concept album differs from a "song cycle" or a "rock opera" also came up, although that's a separate issue in and of itself.

Of course, this debate rages with the benefit of having decades of concept albums to dissect. When "Sgt. Pepper's Lonely Hearts Club Band" arrived, musicians were in the early stages of figuring out how the theme-heavy records favored by jazz artists and Frank Sinatra might be adapted for rock 'n' roll. In fact, the Mothers of Invention's 1965 double album "Freak Out!" and the Beach Boys' 1966 opus "Pet Sounds" are widely considered to be the first rock concept albums.

Not so coincidentally, Paul McCartney has gone on record as saying that both of these records were on his mind as "Sgt. Pepper" started coalescing. "I played ['Pet Sounds'] to John [Lennon] so much that it would be difficult for him to escape the influence," McCartney said in one 1990 interview. "If records had a director within a band, I sort of directed 'Pepper.' And my influence was basically the 'Pet Sounds' album. John was influenced by it, perhaps not as much as me. It was certainly a record we all played -- it was the record of the time, you know?"

The overlapping harmonies of the "Sgt. Pepper" song "She's Leaving Home" are certainly Beach Boys-indebted, although the buffalo stampede-caliber psych-rock of "Freak Out!" has a subtler influence. (It'll be most interesting to see how or if the latter record's DNA seeps into the "Sgt. Pepper" bonus tracks surfacing on the reissue.) And it's possible there's an element of suggestive thinking in play as well: McCartney likes two influential concept albums, and they informed his creative process, ergo "Sgt. Pepper" must also be a concept album.

What's at least clear is that the freewheeling, free-spirited vibe of the Mothers of Invention made a deep impression on McCartney and his creative headspace. "We were fed up with being the Beatles," he said in Barry Miles' biography "Paul McCartney: Many Years from Now." "We really hated that fucking four little mop-top boys approach. We were not boys, we were men. It was all gone, all that boy shit, all that screaming, we didn't want any more. Plus, we'd now got turned on to pot and thought of ourselves as artists rather than just performers."

In the book "Revolution in the Head: The Beatles' Records and the Sixties," McCartney elaborated on the impetus for the record. "I thought it would be nice to lose our identities, to submerge ourselves in the persona of a fake group. We would make up all the culture around it and collect all our heroes in one place."

Every Beatles record feels like it inhabits its own unique universe, but "Sgt. Pepper's Lonely Hearts Club Band" is shrouded in a particular kaleidoscopic mist tied to its time. That's due to the studio techniques,  which, if anything, contribute the most to the record's conceptual unity. But despite its reputation, "Sgt. Pepper's Lonely Hearts Club Band" doesn't feel driven by any sort of formalized (or internal) rule or structure. Instead, the conceit is a broader, external one — an alternate-universe version of the Beatles, maybe, or a record where the band members are exploring different dimensions of their existing personas. It's based around a defensive concept, one predicated on reacting to the past.

Of course, the rub is that the members of the Beatles evolved and experimented, but could never really run away from their strengths. Sure, the opening title track and closing reprise are unifying elements introducing an imaginary band, and both songs encourage fans to pretend like they aren't going to be listening to the Beatles.

However, the sepia-toned "When I'm Sixty-Four" is easily identifiable as old-before-his-time, pure McCartney sentimentality; "Within You Without You" is unmistakably George Harrison sitar-driven mysticism; and "With a Little Help from My Friends," sung by Ringo Starr in the guise of the Eeyore-like Billy Shears, is an inimitable mix of playful and droll. "Lovely Rita," meanwhile, embodies the push and pull of influences that emerged when the four Beatles combined their individual strengths.

"'Sgt. Pepper' is called the first concept album, but it doesn't go anywhere," John Lennon told journalist David Sheff in 1980. "All my contributions to the album have absolutely nothing to do with the idea of Sgt. Pepper and his band, but it works 'cause we said it worked, and that's how the album appeared. But it was not as put together as it sounds, except for Sgt. Pepper introducing Billy Shears and the so-called reprise. Every other song could have been on any other album."

Speaking about "Sgt. Pepper's Lonely Hearts Club Band" in the book "Come Together: Lennon and McCartney in the Seventies," Ringo Starr adds: "It was going to run like a rock opera. It had started out with a feeling that it was going to be something totally different, but we only got as far as Sergeant Pepper and Billy Shears singing 'With a Little Help from My Friends.' It still kept the title and the feel that it’s all connected, although in the end we didn’t actually connect all the songs up.”

Cleverly, the title track and reprise also function as a sturdy defensive mechanism. These bookends effectively set up a tabula rasa listening experience and allow for critical leeway about the eclectic music in between — since, after all, "Sgt. Pepper's Lonely Hearts Club Band" often feels like someone skipping up and down a radio dial, flitting between stations and styles. By creating personal distance from these experiments, the Beatles give extra cushioning to their transition away from fresh-faced rock 'n' roll.

"It seems now that the Beatles were effectively saying, 'Look everyone! Concept albums are possible. This ['Sgt. Pepper'] isn't it, but it proves that it's possible,'" Thomas MacFarlane wrote in the essay "'Sgt. Pepper'"s Quest for Extended Form," which appeared in a book about the record. "In retrospect, this ingenious strategy helped them buy the time necessary to explore questions regarding formal space on a sound recording."

The genius of "Sgt. Pepper's Lonely Hearts Club Band," of course, is that it thrives apart from any concept, and its songs succeed on their own individual merits. McCartney for one remains proud of the record. During live shows, he's fond of reminiscing about how he and John Lennon saw Jimi Hendrix cover the record's title track at a concert — three days after the album was released — while the loopy "Being for the Benefit of Mr. Kite!" has been a recent Macca setlist staple. Once again, the legend of "Sgt. Pepper" lives (and evolves) another day.