The DNC's elephant in the room: Dems have a problem — it's not Donald Trump 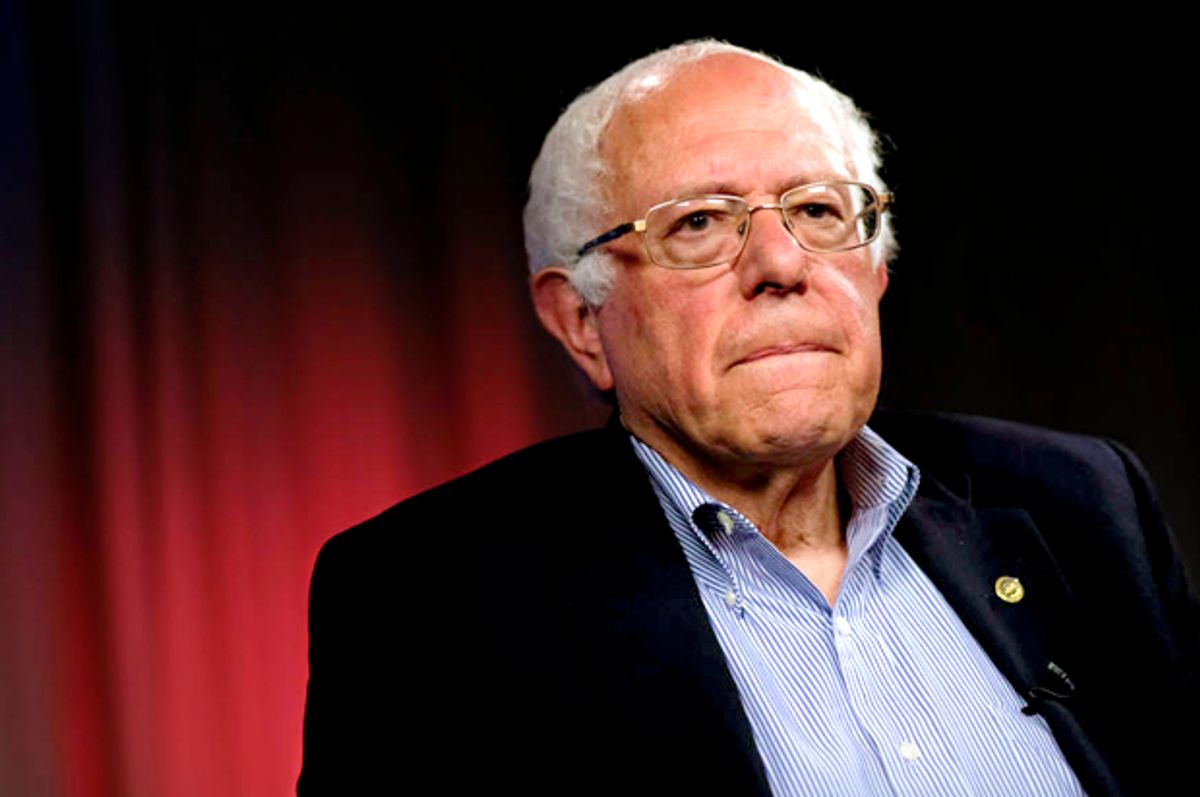 The election of Donald Trump offered the Democratic Party a huge gift. Coming off of a highly contentious election and a series of party scandals, the public came together in a massive effort to protest and thwart everything GOP. Anti-Trump activism and political mobilization has been extraordinary, with record levels of people attending protests, making calls, organizing events and supporting DNC initiatives on a daily basis.

Each day the Trump team conjures up another opportunity for the DNC. From the unconstitutional Muslim ban to a cruel healthcare bill to the firing of FBI Director James Comey, the Trump administration keeps offering Democrats an endless opportunity to gather more public support.

But all signs suggest that the DNC is poised to blow this unique moment and potentially guarantee the GOP increasing success over the next four years. This is so because the DNC has become immensely tone-deaf to its own internal problems.

Much has been made, for instance, of Trump’s historically low approval ratings, but less attention has been drawn to the fact that support for the DNC is even worse.

A January Gallup poll indicated that party identification is at record lows, with 42 percent identifying as independents, 29 percent as Democrats, and 26 percent as Republicans. A recent Washington Post poll showed that the DNC trailed both Trump and the GOP when voters were asked if the party was “in touch” with their concerns. In fact, only 28 percent of those polled felt the party was connected with issues that matter to them.

Chris Cillizza notes that only 52 percent of self-identified Democrats said their party was in touch with peoples' concerns, while 44 percent said it was out of touch: “Those numbers — particularly among Democrats — are striking. Party leaders in Washington have positioned the party as the voice of the little guy since the earliest days of the Trump presidency: Their side would be the one to stand up for the disenfranchised people in the country whose lives Trump neither cared about nor even thought much about.”

And yet, rather than face the extremely low support for the party, Democrats are busy avoiding and ignoring their own credibility problems. Even Hillary Clinton has refused to take any responsibility for losing the election, citing four external reasons for her loss: “Russian meddling in the election, FBI Director James Comey's involvement toward the end of the race, WikiLeaks' theft of emails from her campaign chairman, and misogyny.”

What’s amazing about this list is that there is no reference of any kind to the failures of the DNC itself. Clinton, like all party stalwarts, seems completely incapable of articulating any sort of reasonable assessment of the disasters of the last election.

It’s worth remembering, for instance, that despite all of the cries of Russian interference and hacking there would have been no story and no scandal if there hadn’t been damaging emails to be found in the first place.

And who could forget that after Debbie Wasserman Schultz resigned her post as chair of the DNC in the wake of damning evidence of her bias against Bernie Sanders she was later appointed as honorary chair of Clinton’s 50-state campaign?

As if the leaked emails showing Wasserman Schultz’s bias were not bad enough, there was the Donna Brazile scandal that showed she had advance-shared debate questions with the Clinton camp. As she later admitted after CNN severed ties with her, a “release of emails revealed that among the many things I did in my role as a Democratic operative and D.N.C. Vice Chair prior to assuming the interim D.N.C. Chair position was to share potential town hall topics with the Clinton campaign.” And yet she still maintains she was “fair” to all candidates in the primary.

But it gets worse. As all eyes have been focused on the Trump kakistocracy, the DNC has been dealing with a lawsuit filed against it in federal court in Florida last October. The lawsuit alleges that the DNC’s bias toward Clinton over Sanders amounted to fraud, misrepresentation, unjust enrichment, breach of fiduciary duty and negligence. The plaintiffs have pointed to damning evidence in the emails posted by WikiLeaks proving that the Democratic Party was working against Sanders from the start.

While the mainstream media has almost completely blacked out coverage of this lawsuit, Jordan Chariton has covered it for the TYT Network. He notes that in a courtroom in South Florida over a week ago, a DNC lawyer said openly that if the party wanted to do things like the old days and pick a candidate over cigars in back rooms, it would be within their legal rights to do so.

“We could have voluntarily decided that, ‘Look, we’re gonna go into back rooms like they used to and smoke cigars and pick the candidate that way,’” Bruce Spiva, lawyer for the DNC, said during a court hearing in Carol Wilding, et al. v. DNC Services Corp., according to court filings exclusively obtained by TYT Politics.

Chariton reports that the DNC’s lawyer also implied that, despite the DNC’s charter and bylaws stating that it must be neutral during Democratic primary contests, the DNC charter does not imply a contractual obligation to follow through.

“There’s no right to not have your candidate disadvantaged or have another candidate advantaged. There’s no contractual obligation here . . . it’s not a situation where a promise has been made that is an enforceable promise,” Spiva said.

The DNC is advancing the argument that any claims to be neutral and fair to all candidates were nothing but “political promises” and are unenforceable by law. They claim that there was no expectation that they would actually be evenhanded in their treatment of Sanders and Clinton. They have made this case despite the fact that many in DNC leadership made claims of fairness when Sanders supporters clamored for accountability during and after the primary.

While the lawsuit is still playing out, it is worth pausing for a moment to consider the political backlash that will inevitably ensue here. The DNC lawyers are arguing that they had no obligation to be neutral in the primary. Their strategy in the lawsuit is to claim that they never needed to give Sanders a fair shake. It is hard to see how this will help improve their credibility with voters, even if it does help them win the case.

Spiva’s defense is blatant proof that despite the fact that the DNC fashions itself as the party of the people it is openly and clearly an oligarchy — a fact also made clear by its use of superdelgates. Branko Marcetic of In These Times reminded voters that the DNC superdelegate system was created in 1982 in response to the decisive electoral defeats of George McGovern in 1972 and Jimmy Carter in 1980.

This all proves that the DNC has a serious problem not only with the democratic process but also with the very idea of representing the will of its constituents. And that is not even touching the recent news that former President Obama has decided to speak at Wall Street for $400,000 -- a move Sanders called “distasteful.”

Meanwhile Sanders is the most favored politician in America today. A recent Fox News poll showed him with a 61 percent favorability rating.

So exactly how long can the DNC ride the Trump train and ignore the Sanders progressives? Anti-Trump grassroots movements have sidestepped problems with the Democrats in favor of focusing on ways to block the Trump agenda. But there are rumblings that this won’t last. Even Nancy Pelosi is being given a run by a pro-Sanders primary challenger.

Thus far, the DNC has largely shielded itself from close scrutiny because the Trump circus has been such a terrifying distraction. But its day of reckoning will come, and if it doesn’t make some major changes soon, it won’t be pretty.

As professor of sociology Jonathan Martin puts it, the DNC didn’t need a new chair, it needed a whole new party: “The big concern is that if the party doesn't adopt a bolder message, especially on the populist economic platform that prompted many former Democrats to support Trump and many Independents to support Bernie Sanders, then the party is destined to be in the minority.”

Thus far the party isn’t listening to either the voters or the facts.

I would argue that the two-party duopoly doesn’t serve our nation, especially since the United States is the only developed nation in the world with a two-party system. As we saw over the last election cycle, the two party structure inclines the system toward oligarchy and cronyism.

Some would argue that the implosion of the DNC is a welcome development since it paves the way toward multi-party options. But as I argued prior to the November elections, as long as we are locked in a two-party system, destroying the one viable platform to thwart the Republican agenda is dangerous business. This means that there are good reasons to want to hold the DNC accountable to its ideals rather than cheer as it heads over a cliff.

The elephant in the room for the DNC isn’t Trump or the GOP or Bernie bros or Russian hackers; it is its own elitist, corporatist, cronyist, corrupt system that consistently refuses to listen to the will of the people it hopes to represent. Thus far, though, DNC leadership has refused to take these issues seriously. It’s a strategy that smacks of arrogance and hubris. And it’s a politics that looks a lot more like the GOP than a party invested in helping the little guy.

If the DNC doesn’t deal with the elephant in the room it will soon see that it has indeed become a jackass.