Will the United Methodist Church accept queer pastors or break itself apart? 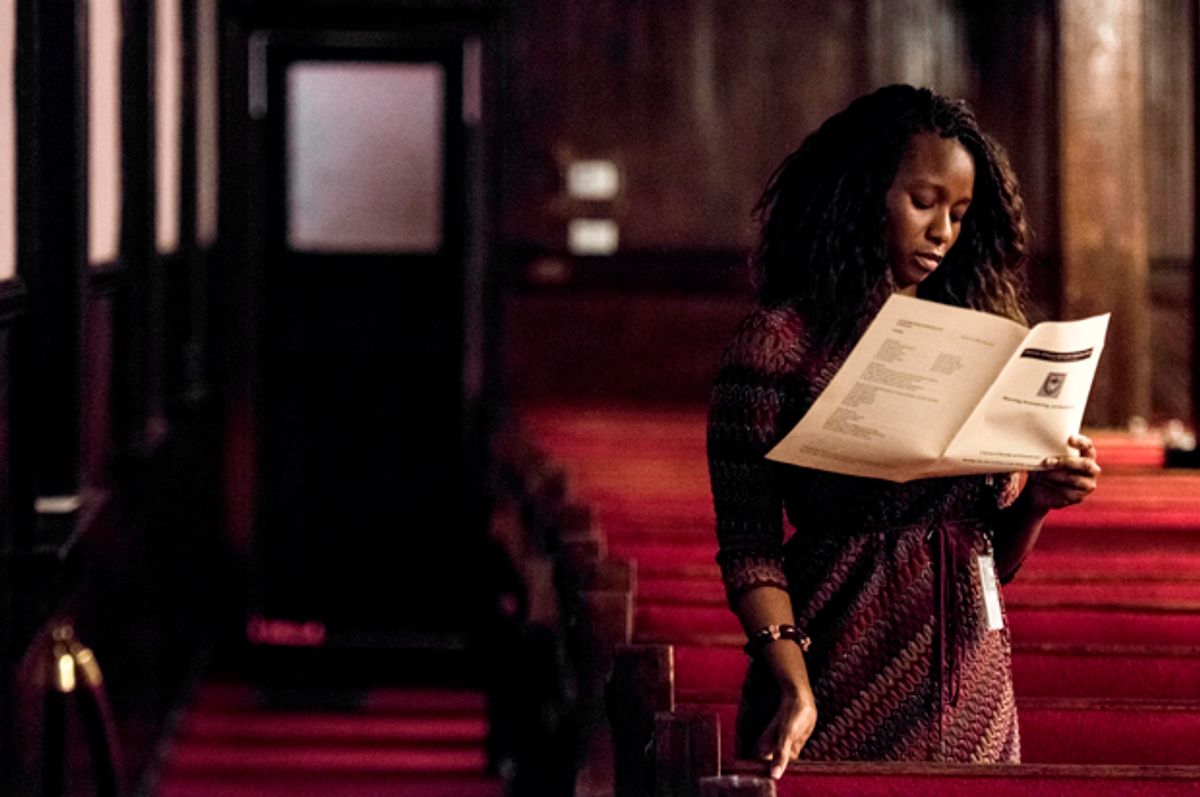 Bishop Karen Oliveto said she was destined to gaze up at the stars. When she was a young girl, her mother — a recent divorcée — would send her daughter to the local church every week to get some alone time. Oliveto immediately felt at home in a faith where she was told she was “unconditionally loved and accepted by God.” When Oliveto was 11, a pastor at her church asked what she wanted to be when she was older. She dreamed of being an astronomer, but he had a different idea: Had she ever considered the ministry?

“It was like my world busted open,” Oliveto said. “Where else would I want to work except where I felt love in such a tangible way and where I could pass that love on to others?”

The road to ordination was a difficult one for Oliveto. She became a student pastor at 18 and was assigned to her own church at 25, but during seminary, Oliveto had a revelation: She was a lesbian. Oliveto immediately hopped on a bus to Nova Scotia, hoping to run as far away from her discovery as possible. She cried for the first 1,000 miles of the trip. But as the bus passed through Utah, a feeling of acceptance swept over her. For the first time since enrolling in seminary, she felt connected to God.

“I learned an important thing: God never leaves us,” she said. “We leave God when we deny who God created us to be."

Oliveto, who began serving as a pastor in 1992, became the first openly LGBT person to be ordained as a bishop in the United Methodist Church last year. She was elected in the Western Jurisdiction of the UMC, which includes Colorado, Arizona and Utah. Her consecration, though, was jeopardized after a member of a separate jurisdiction filed a complaint with the UMC’s highest court, known as the Judicial Council. Paragraph 2702.1 of the Church’s Book of Discipline states that no “self-avowed practicing homosexual” can be an active member of the clergy.

“I was never named [in the complaint], but it was clearly about me,” Oliveto explained.

Last month, the Judicial Council ruled 6 to 3 that Oliveto would remain a member of the clergy. The court claimed that questions around her consecration came down to a jurisdictional matter, as the Church is divided into regional districts that largely govern their own affairs.

But one major policy did change: The judicial leadership ruled that any clergy person legally married to a member of the same sex is automatically considered to be a “self-avowed practicing homosexual,” and faces expulsion.

Oliveto and her partner, the Rev. Robin Ridenour, have been married for two years. Although Oliveto will retain her post for now, she said that the Church is currently reviewing her ministry. That could lead to her removal, but Oliveto said that she and the Church are “working together,” calling the process “very thoughtful.”

Oliveto’s consecration is a tentative victory for LGBT advocates who have long been fighting for inclusion in their faith, but the United Methodist Church finds itself at a crossroads over its stance on homosexuality. Many members of the church fear the growing divide between the LGBT-affirming faction and its evangelical membership will split the church in two.

LGBT members claim that they just want to feel welcome in a church that is a home for so many, but this possible schism threatens the future of that very community.

Anna Blaedel was one of 111 clergy members who came out in a letter to the Methodist Church prior to last year’s General Conference, a quadrennial meeting of UMC membership. Blaedel, a reverend in Iowa City, delivered an emotional three-minute address to fellow conference attendees.

That very same day, three people issued a complaint about Blaedel to the United Methodist Church. It was handwritten on a torn sheet of notebook paper. The people who lobbied for her removal from the Church had never met her, and they even spelled her name wrong.

“The world is in deep and urgent need of transformation and healing,” Blaedel said in an email. “The world is falling apart, violence and injustice and oppression are rampant, and the UMC is focusing on fighting about whether queer people have sacred worth. That's unconscionable and incompatible with Christian teaching. How do they justify spending our time, energy, and resources on this?”

Although charges that she violated the Book of Discipline’s rules on homosexual activity were dismissed last September, Blaedel would be put on trial again this year for performing a friend’s same-sex wedding. She and the Church are currently in the resolution process on that complaint, which was filed in April.

The United Methodist Church put in place its policies on gay clergy members back in 1972 as a backlash to the nascent gay liberation movement. But prior to the recent ruling by the Judicial Council on same-sex marriages, Oliveto said that it was often difficult to prove whether gay clergy members were “self-avowed practicing homosexuals.” She claimed that in order to be prosecuted, a member of the ministry would have to confess to a “bishop or a member of the hierarchy that you were having genital contact with someone of the same gender.”

“It meant that many LGBT people were able to serve — because who wants to ask that question?” she asked. “It was a way for people to do the ministry that they were called to do.”

But the threat of having a complaint filed against them weighs heavily on many gay clergy in the United Methodist Church. Chet Jechura, who is currently going through the ordination process in Washington, D.C., said that it’s difficult to escape the fear that “at any given moment someone could rip the rug out from underneath you.” If someone were to ask whether Jechura is gay, he would “have to answer authentically and truthfully.”

“I will never lie to my pastor and my bishop,” he said. “I will always speak the truth — because where there is truth, there is freedom.”

Anthony Fatta, a gay clergy member in Watsonville, California, said that the possibility of “being defrocked forces many people back into the closet,” and Oliveto estimated that for every clergy member who comes out, at least 10 more are still in hiding. All it takes to begin the process of being defrocked — or having your pastoral credentials taken away — is for one person to have a problem with your ordination. Dixie Brewster, a high school girls’ basketball coach, was the sole voice who brought Oliveto’s case to the Judicial Council.

Defrockings are not uncommon in the UMC. Cynthia Meyer, a lesbian pastor in Kansas, left the Church in 2016 after she was set to be put on trial last year.

The United Methodist Church, however, agreed to review its policies on gay clergy in 2019 at a special session of the General Conference. The Church’s “Commission on the Way Forward,” a 33-member board, will meet regularly to discuss the inclusion of LGBT members until that time — and plans to present its findings to the general body. The UMC will then vote to approve or reject the commission’s recommendations.

The Church’s decision on LGBT clergy could be a critical breaking point for the religion, which is the third largest in the United States. If the Methodist leadership decides to uphold the status quo — meaning that people in same-sex relationships will continue to be blocked from ministry — little will change. But if the United Methodist Church elects to allow gay members to be ordained without being celibate, conservative bodies in the Church have threatened to break off from the mainline faith.

When Oliveto was consecrated in 2016, the Rev. Rob Renfroe — the president of Good News, which represents the evangelical wing of the UMC — claimed that the church was headed for a split. “If the Western Jurisdiction wanted to push the church to the brink of schism, they could not have found a more certain way of doing so,” Renfroe said in a statement.

John Lomperis, the United Methodist Director of the conservative Institute on Religion & Democracy, was even less hopeful about compromise. He claimed that LGBT clergy members are exploiting the faith for financial gain in a 2016 interview with the Christian Post.

“There is absolutely zero integrity in the way some people have self-servingly lied about supporting our denomination's values so that they could get ordained with us and then get paid with United Methodist money while working to undermine our Church from within,” Lomperis said. “If a United Methodist clergyperson is same-sex-attracted and refuses to practice biblical sexual self-control, then the principled, brave, and honest thing to do, short of repenting or quickly resigning, would be for them to drop the lies, the word games, and the Pharisaical search for legal technicalities.”

These comments are extreme, but M Barclay, the director of communications at the pro-LGBT Reconciling Ministries Network, claimed they are not easy to dismiss: The evangelical faction of the UMC has been growing in influence in recent years, largely due to its ministry work abroad. Barclay, who uses gender neutral pronouns, said that the “strong fundamentalist wing advocating against queer inclusion” has pushed the Church to the right on social issues, including LGBT inclusion.

“A lot of the mainline denominations have moved on,” Barclay said, citing the embrace of same-sex marriage in the Episcopal and Presbyterian faiths. “We’re one of the last mainline Protestant denominations to be struggling with this. It’s frustrating that we’re falling behind.”

Barclay, though, argued that things are slowly changing in the United Methodist Church. In addition to the more than 150 out LGBT clergy members who are currently ordained in the UMC (and have yet to be defrocked because of it), they claimed that over 800 United Methodist communities have become “reconciling.” That means that these groups — whether churches, youth groups, or Sunday school classes — have openly stated their commitment to LGBT nondiscrimination in the Church.

Fatta added that although the LGBT-inclusive and conservative factions of the Church appear to be drifting apart, schism isn’t the answer.

“The frustration is that gay people are going to continue being born,” Fatta said. “Even if there is a split in the church over this, gay and trans folks will still be born in families that turn to the more conservative church. It’s frustrating because the church is trying to find a solution but there’s no problem.”

If finding an inclusive way forward is crucial for the Church’s LGBT youth, many of whom grow up hearing that they are “broken” and “sinful,” Oliveto is hopeful that a solution is possible.