President nominates 10 judges to the federal bench, the first step in a right-wing corporate takeover 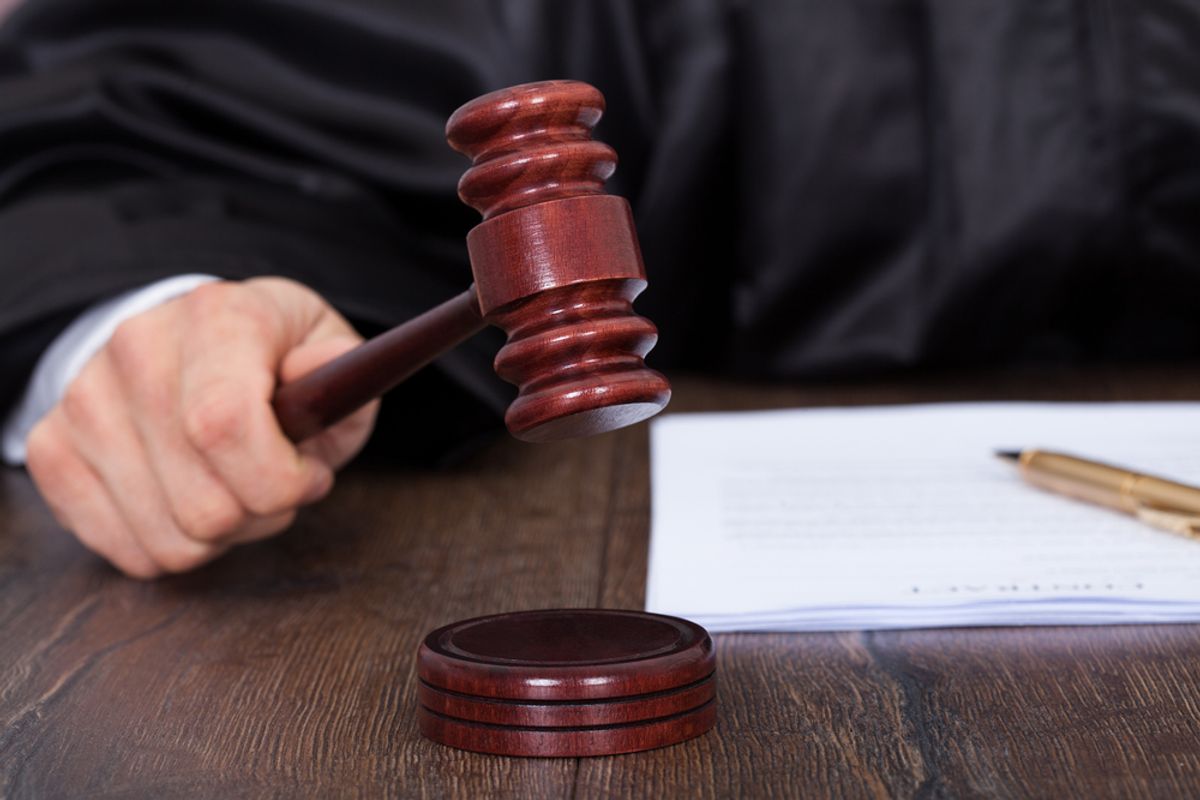 On Monday, President Trump nominated 10 federal court judges, beginning a process that will take the judiciary in a far-right direction for years to come.

Trump’s appointees — five to federal appellate courts, four to lower district courts and one to a federal claims court — are doctrinaire right-wingers who started as clerks for the most right-wing Supreme Court and federal court justices, and then went on to build careers in corporate practices and academia siding with big business and religious fundamentalists over other Americans.

Many of the nominees came of age during the 1980s and afterward when the right invented the doctrine of so-called constitutional originalism as a way to protest what they viewed as a left-leaning judiciary. Led by professor-turned-Supreme Court jurist Antonin Scalia and others, they rejected the notion of the law as a “living constitution” or one that issued rulings based on changing times. They said courts needed to stick to what the 18th-century framers constructed, an era when corporations barely existed in law and business and government was bare bones. That ideology masked their agenda, as exemplified by Scalia’s ruling in Heller, where the court overturned a District of Columbia gun control law and Scalia said the U.S. Constitution included handgun rights.

What follows are sketches of Trump’s five federal appeals court judges, the first of what will be a red wave shaping the courts for years. That’s because Senate Republicans blocked scores of Obama administration judicial nominees, leaving Trump poised to make more appointments than any president in decades. There are now 129 vacancies in the United States Courts of Appeal, U.S. District Courts, U.S. Court of Federal Claims, and the U.S. Court of International Trade. While the Supreme Court issues about 150 rulings annually, federal appeals courts review some 30,000 cases.

Trump’s nominees came from lists compiled by the Federalist Society and the Heritage Foundation, both far-right institutions. As the libertarian Cato Institute blogged Monday, “With this excellent slate, Trump continues fulfilling his campaign promise —perhaps his most important one, in terms of securing the Republican coalition.”

1. Kevin Newsom, 44, nominated to the Sixth Circuit based in Cincinnati, is an ex-state government and corporate lawyer from Alabama who has never been a judge. His law firm bio notes he clerked with Supreme Court Justice David Souter and then returned to Alabama where he joined the Republican establishment, including serving as Solicitor General, where he argued for the state in court. In private practice, he helped drug makers like Pfizer create a strategy to beat nationwide lawsuits that sought to tie the pharmaceutical company to injuries caused by generic copies of their drugs—a classic corporate law firm role.

In a law review article touted on the Federalist Society website that discussed one of Newsom’s briefs to the Supreme Court, Newsom described how a high school coach from his hometown, Birmingham, should not be able to claim discrimination under Title IX of federal education laws (that bar discrimination against women in sports) after being fired by the city school board for complaining about sexist treatment of his team. Newsom wrote, “Jackson’s [the fired coach] message was clear: without a private cause of action, those who complain about discrimination cannot be ‘safe from reprisal.’ But the choice is not all or nothing.” Newsom noted Alabama and eight other states were urging the Supreme Court to let the firing stand, which it did. Defending power is one of his specialties.

2. John K. Bush, 53, is also nominated to the U.S. Court of Appeals for the Sixth Circuit. Bush is a longtime Republican Party activist and defense attorney based in Louisville. A promotional video on his law firm website describes the kinds of cases he takes, saying, “A new challenge is typically a question of law that isn’t resolved, because if it were a black and white question they wouldn’t come to us. It would have already been resolved or it would have been handled pretty easily.”

Bush’s law firm resume touts his defense of President Ronald Reagan during the Iran-contra affair (where Reagan lied about trading arms for hostages with Iran). Bush also represented numerous corporate franchise chains against suits by operators, including an “appeal that overturned a $390 million judgment” against Meineke Discount Muffler Shops, Inc., and his work for car makers and insurers “successfully challenging [the] constitutionality of punitive damage awards.” His career has been built on taking the side of big business against individuals.

3. Amy Coney Barrett, 45, is nominated to the Seventh Circuit based in Chicago. Barrett, a law school professor at Indiana’s Notre Dame University, specializes in federal courts, constitutional law and statutory interpretation. She is part of the far-right community that touts constitutional originalism. Barrett clerked for Judge Laurence H. Silberman of the U.S. Court of Appeals for the D.C. Circuit and for Scalia. In one recent article, she criticized the most fervent originalists who believe “courts ought to treat statutes [laws] as presumptively unconstitutional and review them under the more aggressive pre-New Deal standard.”

But Barrett does not believe courts should defer to current events, writing, “For Justice Scalia and those who share his commitment to uphold text, the measure of a court is its fair-minded application of the rule of law, which means going where the law leads. By this measure, it is illegitimate for the Court to distort either the Constitution or a statute to achieve what it deems a preferable result.” Scalia, of course, was an activist judge. There’s no telling where Barrett will end up despite her conservative point of departure.

4. David Stras, 44, is currently an Associate Justice of Minnesota’s Supreme Court who was on Trump’s list of possible Supreme Court nominees. He is nominated to the Eighth Circuit in St. Louis. Stras, who is the descendant of Holocaust survivors, clerked for a series of right-wing judges, culminating with Supreme Court Associate Justice Clarence Thomas. He became a law professor in Minnesota after two years in practice. Stras was appointed to that state’s high court by former GOP Gov. Tim Pawlenty and re-elected once. His most notable rulings include granting a 50-year restraining order to a battered woman and her daughter against her ex-husband, and a dissent where he disagreed with the state Supreme Court ordering an insurer to pay more to a victim who was badly injured in a school bus accident along with 18 others. "The court exalts policy over text,” Stras wrote, saying the victim should only receive damages up to what was insured.

His other strict constructionist rulings include saying it's not a court’s job to fix a law deemed unconstitutional; saying a farmer who owned two adjacent parcels was not eligible for tax deductions on both because state law extended only to one homestead; and a dissent arguing it is unconstitutional for police to force drivers to take a breath test because they don’t have a search warrant. “The truth of the matter is that its decision is borne of obstinance, not law,” Stras wrote, signaling his own legal hard-line.

5. Joan Larsen, 48, another nominee to the Sixth Circuit, is now a justice on Michigan’s Supreme Court. GOP Gov. Rick Snyder appointed her in 2015 and she was re-elected in November 2016. She clerked for David B. Sentelle of the U.S. Court of Appeals for the D.C. Circuit and then for Scalia. Larsen was a Deputy Assistant Attorney General at the Department of Justice before she left for the University of Michigan, where she taught constitutional law, criminal procedure, statutory interpretation and presidential power. She, too, is a strict constructionist, but is not timid. Larsen’s campaign website said, “‘Justice Joan’ is a Constitutional, rule-of-law judge. Justice Joan knows it’s not her job to legislate from the bench. She understands our State Constitution is not a ‘living document’ and will preside over any case that comes before the Supreme Court with honor, integrity and distinction.”

Stubbornness is her stock and trade. In a 2004 paper criticizing the Supreme Court ruling Lawrence v. Texas, which declared sodomy bans unconstitutional, Larsen said international norms didn't matter. “The majorities in Lawrence . . . simply cited international conventions and the opinions of foreign and international bodies as if they were well-accepted sources of domestic constitutional interpretation . . . This lack of reflection should alarm us.” Larsen, who apparently was on Trump’s short list for the U.S. Supreme Court, has an alarmingly short record of legal decisions. But her values are clear enough.

“Since he was inaugurated, President Trump has overturned more than a dozen regulations, rescinded numerous executive actions and established a system of regulatory oversight that, for the first time, incentivizes agencies to evaluate the accumulated stock of regulation before issuing new rules,” wrote Susan E. Dudley for the Federalist Society blog on Trump’s first 100 days.

These latest judicial appointments build on that agenda and are part of the White House’s larger strategy to drastically recast the nation’s legal landscape for years to come. That’s what the Cato Institute’s blog meant when it praised Trump court picks for “securing the Republican coalition.”