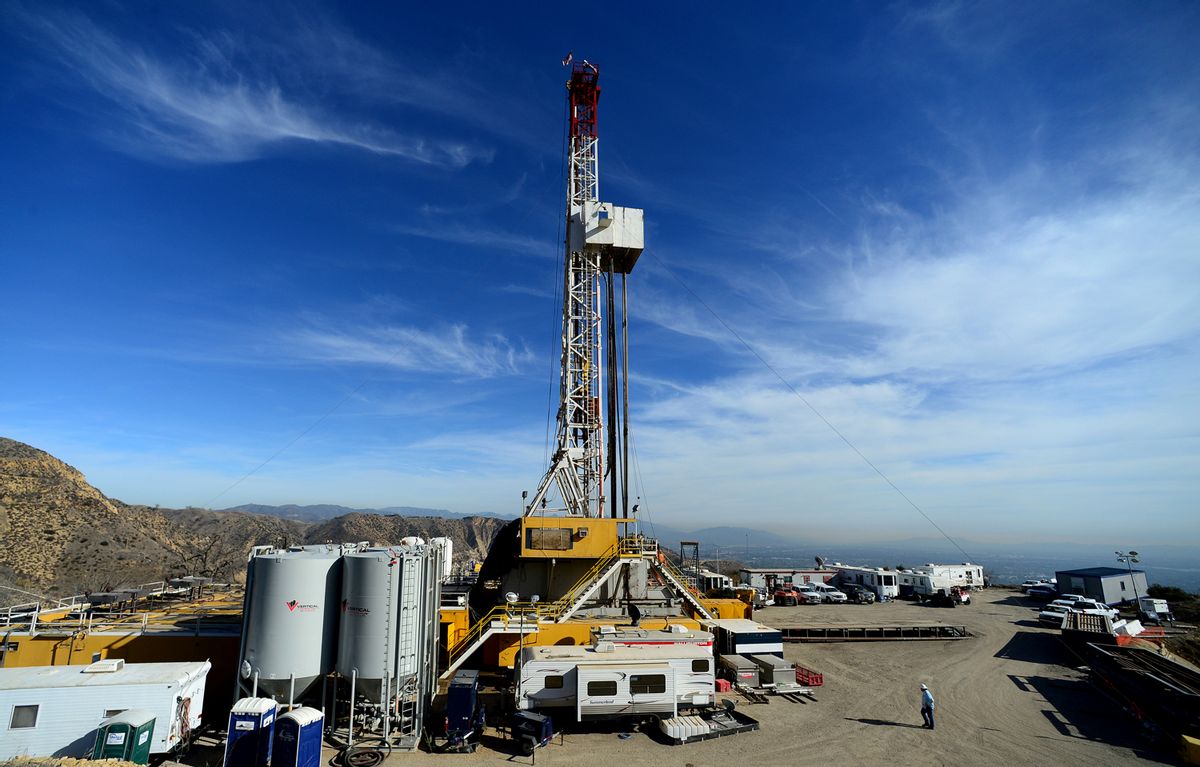 FILE - In this Dec. 9, 2015, file pool photo, crews work on a relief well at the Aliso Canyon facility above the Porter Ranch area of Los Angeles. A year after a leaking well near Los Angeles spewed natural gas for nearly four months and drove thousands of families from their homes, a White House task force is recommending dozens of changes to curtail leaks from the nation’s 400 underground natural gas storage wells. (Dean Musgrove/Los Angeles Daily News via AP, Pool, File)
--

The Department of Interior plans to try to roll back rules limiting methane pollution and waste from fossil fuel drilling on federal lands, after a bid to repeal the regulations failed in the Senate.

Senators voted 51-49 Wednesday against an effort to repeal the Obama-era rules, with three Republicans joining all Senate Democrats in voting to oppose it.

Methane is a major component of natural gas, and it’s also a health hazard and a major contributor to global warming. Some escapes from gas and oil operations to the atmosphere by venting or through leaks, and some is burned off in a process called flaring.

Sen. John McCain, a Republican from Arizona, called the control of methane “an important public health and air quality issue” in a statement after he helped vote down the repeal effort. But he called on the Trump administration to “revise and improve” Obama’s rule.

While Interior Secretary Ryan Zinke told Bloomberg he has “never been very comfortable” with the waste of natural gas from public land, his department said after the vote it had “flagged the Waste Prevention rule as one we will suspend, revise or rescind.”

The methane rules were designed to reduce pollution and protect public resources, but they’re opposed by gas and oil drillers, who characterize them as costly and burdensome. “The rule could impede U.S. energy production,” the American Petroleum Institute’s Erik Milito said in a statement.

Efforts to revise or repeal the rules may take years, with proposals to change or eliminate federal regulations requiring public hearings, and expert analysis needed to help overcome any legal challenges.

Environmentalists lauded Wednesday’s vote. It handed them a rare recent victory over the gas and oil industry.

The environmentalists were joined in their celebrations by some fiscal conservatives. The nonprofit Taxpayers for Common Sense has been a leading critic of the repeal effort. That’s because natural gas from public lands is a public asset, and reducing methane waste will help boost overall royalties received for it.

The Government Accountability Office estimated in 2010 that federal royalty payments could be boosted by $23 million a year by “economically” minimizing venting and flaring of methane using technology that’s “currently available.”

“This is great news, I think it’s a victory for taxpayers,” Ryan Alexander, president of Taxpayers for Common Sense, said after the vote. “We will definitely be working with the Department of Interior and talking to the different offices there to inform them of our opinions — and to make sure they’re thinking about taxpayers.”

California, Colorado and some other states have been moving in recent years to limit methane leaks by the gas and oil industry and by utilities, spurred in part by desires to reduce air pollution, slow global warming and prevent accidents.

“Some governments are starting to take methane seriously — up to a point,” said Steve Weissman, associate director of the University of California, Berkeley’s Center for Law, Energy, and the Environment.

Weissman warned that some leakage is inevitable so long as energy from fossil fuels is heavily relied upon.

“We should be able to go a long way to reduce methane leaks,” Weissman said. “But as long as we withdraw and rely on natural gas, this very light gas will find passageways to freedom.”