The Republicans wish they had Barry Goldwater right now 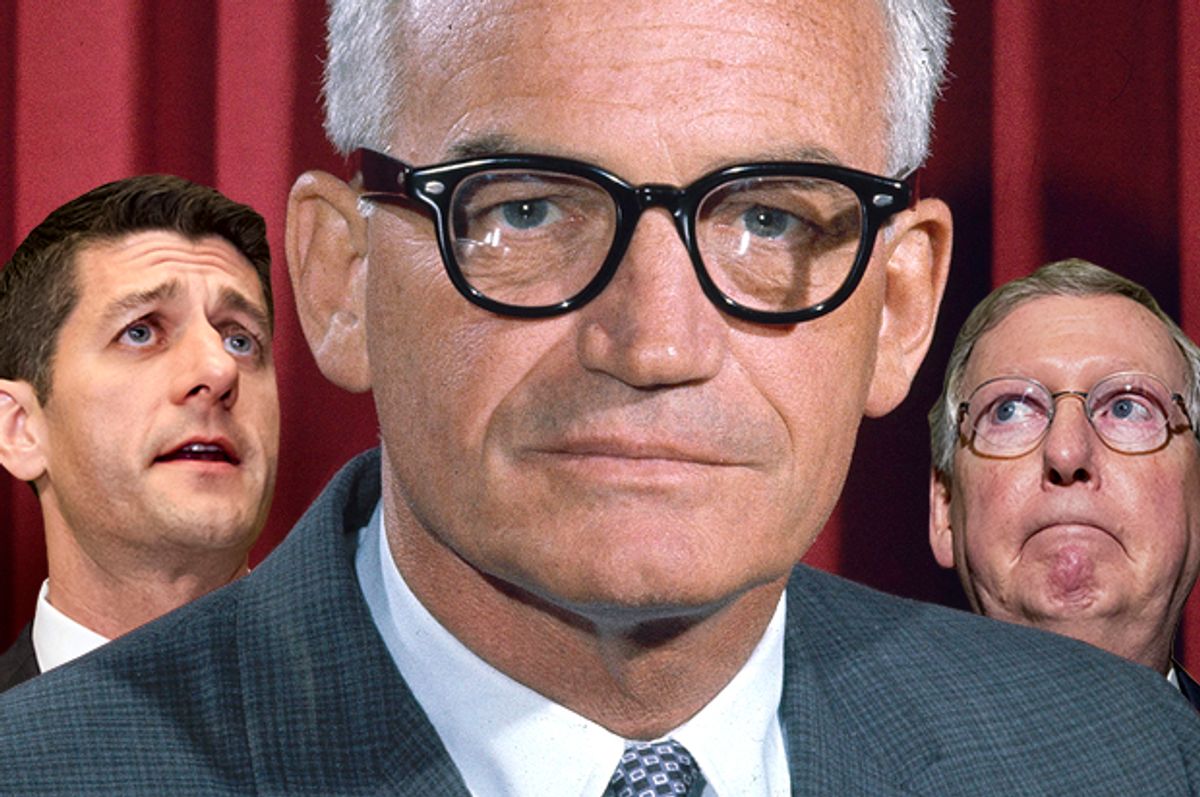 Last July, when pundits were drawing countless parallels between Donald Trump and Barry Goldwater, the Republican presidential nominee in 1964 who transformed the party by pushing it rightward, it was worth noting that Trump was no Goldwater, in part because he lacked Goldwater's philosophical heft and in part because Trump could actually win the damn election (which, of course, he wound up doing).

In light of the Republican Party's wishy-washy response to Trump's firing of FBI Director James Comey, however, it's clear that it isn't just Trump who is no Goldwater. The entire Republican Party has abandoned the spirit of their conservative predecessor.

This doesn't mean we should suddenly elevate Goldwater to heroic status. The racism, trigger-happy jingoism and heartless laissez-faire ideology so detestable in the modern GOP can all be directly traced back to his insidious 1964 presidential campaign. Our nation would have been far better off if the movement that Goldwater spawned had died with his landslide defeat at the hands of Lyndon Johnson.

Nevertheless, there is one aspect of Goldwater's career that modern Republicans should emulate.

When he saw that President Richard Nixon had committed crimes that demanded he be removed from office, Goldwater had the courage to tell the president — to his face, no less — that he needed to resign.

At that point Goldwater was a senator from Arizona, and on Aug. 6, 1974, he made it clear to the Senate Republican Conference lunch that Nixon was a liar who needed to go:

"There are only so many lies you can take, and now there has been one too many," Goldwater said, "Nixon should get his ass out of the White House — today!"

One day prior, Nixon had released transcripts of conversations he had had with Chief of Staff H. R. Haldeman that proved he had tried to cover up the Watergate burglary. More specifically, they showed him instructing the FBI to stop investigating the break-in because he knew that White House officials and the Campaign for the Re-election of the President were involved in it.

Goldwater was incensed that Nixon had lied to the American people about his knowledge of the break-in and set up a meeting with the president. After being joined by Republican congressional leaders from the Senate and House of Representatives, Goldwater told him that "there's not more than 15 senators for you."

While this wasn't the only reason Nixon stepped down, it was without question a crucial moment. So long as Nixon believed that the rest of the Republican Party would back him no matter what — and up until that moment, he thought this was the case — he could dismiss the Watergate crisis as just another partisan tempest that would eventually subside on its own.

Once he saw that even his own party didn't have his back, he realized that staying in office would only delay the inevitable.

Let's not mince words about the meaning of Trump firing Comey, as well as basically admitting that he did so to halt the Russia investigation. It is almost eerily analogous to the so-called "Smoking Gun" tape that pushed Goldwater over the edge about Nixon. Like Nixon, Trump is accused of engaging in illegal chicanery in order to win a presidential election; like Nixon, Trump doesn't want America's top law enforcement agency investigating his campaign, for fear that it will compromise his presidency; and like Nixon, Trump is willing to create a constitutional crisis so that he can be above the law.

Right now the only thing that separates Nixon from Trump is the fact that Trump, unlike Nixon, has yet to be confronted by his own Goldwater.

If that doesn't change soon, the Trump era may be remembered as the time when the Republican Party forfeited its own soul — and took American democracy down with it.