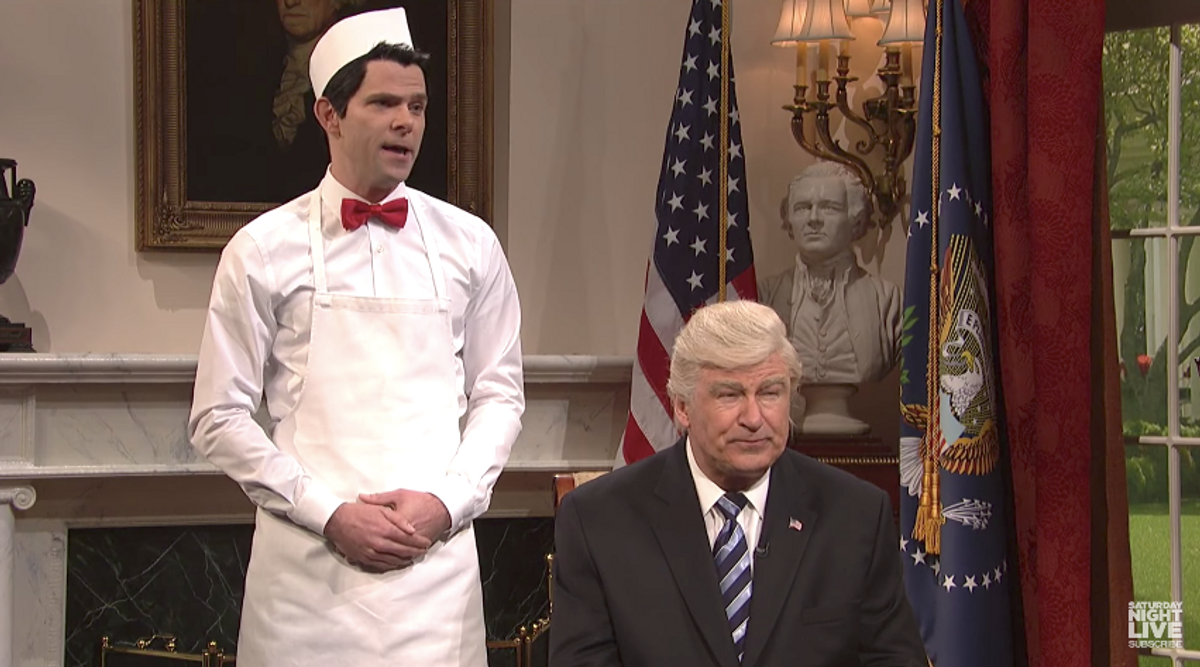 This week on "Saturday Night Live" the show kicked off with part two of President Donald Trump's interview with NBC's Lester Holt, only this time the interview featured the epic duo of Alec Baldwin as Trump and Michael Che as Holt.

"Before we begin I just need to know that I have your undying loyalty," Trump said. Holt replied saying simply "You don't sir." Holt then got started by bringing up Trump's firing of FBI Director James Comey, saying it was the big story this week. Trump countered by once again referencing his election victory.

"Well first, all I can just say is, I won the election fair and square — an everyone knows that," Trump touted. Holt responded by reminding the president that he brings this up "literally all the time.

"Well it's one of my greatest hits," Trump said. "And my fans love when I play the hits," He added.

Holt then talked about how the White House justified Comey's firing all week by saying he received recommendations from the Department of Justice, but Trump decided to tell Holt the real reasons behind the move. "I fired him because of Russia. I thought — he's investigating Russia — I don't like that, I should fire him. Holt responded saying "But that's obstruction of justice?"

It's at that moment that Holt comes to the realization that he may have gotten the president to admit to a crime. "Wait, so, did I get him? Is this all over?" Holt says pressing his earpiece. "Oh, no I didn't? Nothing matters, absolutely nothing matters anymore?" Holt asked.

Trump said that nothing could stop him because he had the Republicans in the palm of his hand. He then rings a bell and House Speaker Paul Ryan rushes into the room wearing an apron to deliver Trump his two-scoop serving of ice cream. Trump then told Ryan to get out when he began his rhetoric about how excited he is to work with the new president. "Whatever you say Mr. Trump. He feeds me dog food," Ryan said.

The interview closed with Holt comparing Trump's presidency to an insane reality television show thats on 24/7. Trump said things are only just getting started, and that the show will run for eight years. He also hinted at some unpredictable plot twists and new characters that will be returning.

"I can't believe you're president," Holt said, on behalf of everyone, to end the interview.