After blaming Democrats for his vote to confirm Jeff Sessions as attorney general, Rand Paul now complains that Sessions' policies will "ruin lives"

“In some ways, the Democrats made it much more certain that I would vote for him," Paul said to justify his vote 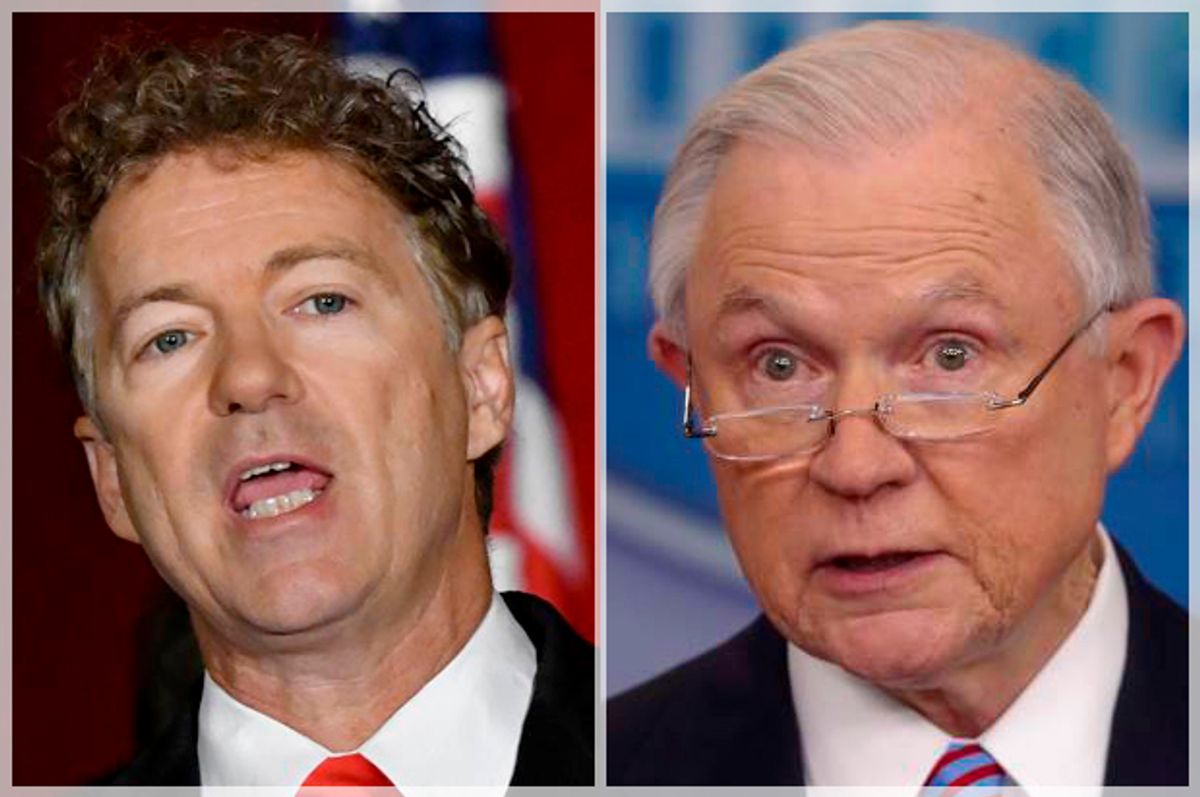 At least one Republican Senator is standing up to Attorney General Jeff Sessions' draconian new policy on drug offenders — although this same senator voted to confirm Sessions only a few months ago.

In a new editorial for CNN, Sen. Rand Paul of Kentucky argued that Sessions' recent instruction to prosecutors to charge suspects with the most serious provable offenses "will accentuate the injustice in our criminal justice system." Paul pointed to the fact that "mandatory minimum sentences have unfairly and disproportionately incarcerated a generation of minorities" and argued that Sessions policies will only exacerbate this existing racial injustice.

"If I told you that one out of three African-American males is forbidden by law from voting, you might think I was talking about Jim Crow 50 years ago," Paul wrote. "Yet today, a third of African-American males are still prevented from voting, primarily because of the War on Drugs." He went on to cite statistics showing that racial minorities are more likely to be convicted of drug possession than whites. Even though a majority of illegal drug users and dealers are white, three-out-of-four of the people in prison for drug offenses are either African-American or Latino.

Paul also argued that mandatory sentencing laws "take discretion away from judges" and pointed out that America's prison population has increased more than sevenfold since the 1980s, with 90 percent of the population comprised of nonviolent offenders.

"I know a guy about my age in Kentucky who was arrested and convicted for growing marijuana plants in his apartment closet in college," Paul writes. "Thirty years later, he still can't vote, can't own a gun, and, when he looks for work, he must check the box -- the box that basically says, 'I'm a convicted felon, and I guess I'll always be one.'" Paul added, "He hasn't been arrested or convicted for 30 years -- but still can't vote or have his Second Amendment rights. Getting a job is nearly impossible for him."

Ironically, when Paul voted to confirm Sessions as attorney general earlier this year, he argued that "there's no evidence in his public career that he has ever been racially insensitive."

In fact, Paul faulted members of the opposing party for forcing him to support Sessions as attorney general -- despite understanding that, "It’s going to be more difficult for criminal justice reform under this president and under this administration."

Paul told Roll Call shortly after voting to confirm Sessions, “In some ways, the Democrats made it much more certain that I would vote for him, by trying to destroy his character ... “They chose to go after him, and try to destroy a man’s character.”