Commencement speaker blues: Who is the graduation address actually for? 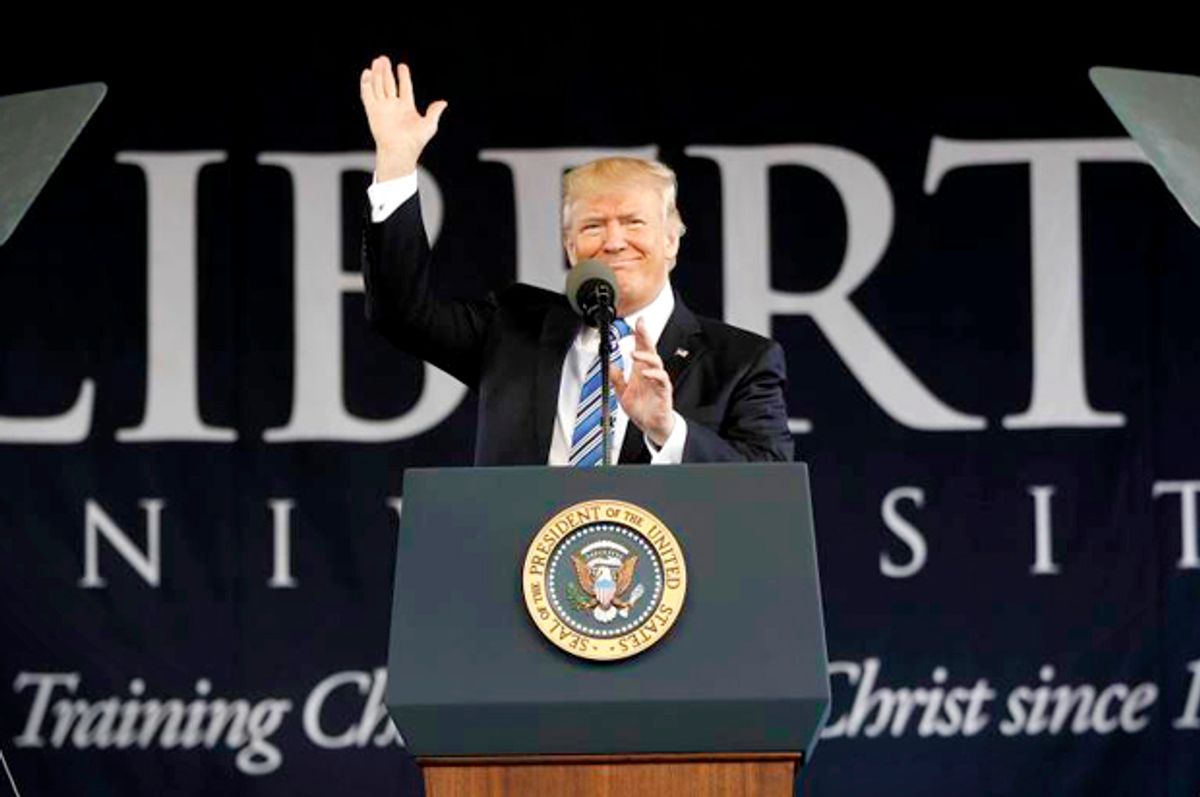 Imagine working this hard for four straight years­­­­ or longer: adjusting to new people and accepting new cultures while trying to explain your own, learning math you’ll never use, digesting philosophies you don’t believe in, putting up with petty professors, switching majors three times and soaking your liver in rail alcohol because you are stressed out at the end of every single semester. Finally, you've earned the $120,000 worth of debt that equals the 120 credits that you need to walk across the graduation stage. You did it! You made your parents proud, and now you have to hustle up those extra tickets so the aunts and grandparents on both sides can attend your graduation, too — only to find out that President Donald Trump or Secretary of Education Betsy DeVos is going to be giving the commencement address.

The butcher-of-education — or the whole-country-butcher-in-chief himself — is the main speaking event at your grand farewell, and you can’t do anything about it. Your school had the nerve to spend your hard-earned (or hard-borrowed) tuition on a person who makes you cringe every time you turn on cable news without even considering your feelings. That’s what happened to the graduates of Liberty University and Bethune-Cookman University this spring.

DeVos delivered the commencement speech at Bethune-Cookman on May 10. Bethune-Cookman is an HBCU, or a historically black college or university. That means that the school is full of black students. They probably know more about the Confederate flag than people who wave it proudly, including those who waved it outside of Donald Trump's campaign rallies. Black students remember Trump's demeaning comments about women and the way in which he paraded token blacks in front of news cameras while hesitating to denounce support from racists like former KKK leader David Duke. They see the administration appoint people with racist histories like Steve Bannon and Attorney General Jeff Sessions, and they saw DeVos eagerly jumping at the chance to affiliate herself with this administration. So unless DeVos believes that the graduates of Bethune-Cookman are stupid, why would she think that they’d receive her message with open arms?

The person who booked DeVos to speak at the university's graduation must not have any respect for the students, either. How could the institution think hosting DeVos on the graduation stage would be anything but a complete disaster?

“I am at the table fighting on your behalf, and on behalf of all students across this great nation,” DeVos said as the crowd booed her words. “I also want to acknowledge that we all arrived here today with different life experiences and different perspectives. I view that not as a negative, but as a gift.”

This is what denying racial and economic privilege looks like. DeVos is deluded if she views her presence and her opportunity to push a trash political agenda onto the captive crowd as a gift to them. Commencement is supposed to be a special day for students­­ and families, not for members of the president's cabinet.

DeVos did acknowledge that many of the students didn’t want her to attend. But she should’ve done the right thing and stayed home —  or made herself available to deliver an online speech for graduation at Trump University, if that’s still a thing.

Meanwhile, Donald Trump took the easier route by speaking Liberty University, an Evangelical Christian school that preaches the values he magically found during his campaign, on May 13.

University President Jerry Falwell, Jr. endorsed Trump's candidacy, giving him a serious evangelical push back when Trump was struggling with the white-church crowd, so it’s only right the president now return the favor.

“In your hearts are inscribed the values of service, sacrifice and devotion. Now you must go forth into the world and turn your hopes and dreams into action. America has always been the land of dreams because America is a nation of true believers,” Trump told the Christian crowd. “When the pilgrims landed at Plymouth they prayed. When the founders wrote the Declaration of Independence, they invoked our creator four times, because in America we don't worship government, we worship God.”

Although this crowd of graduates was more receptive to Trump's speech than Bethune-Cookman's was to DeVos' address, I still can’t help but think that the Christians in the audience at Liberty University weren't necessarily buying it. It's obvious that service isn’t important to Trump — he used college to avoid the Vietnam draft, and nobody can say for sure that his service comes in the form of charitable donations, since he hasn't released his tax returns. How are those graduates and their families supposed to believe him when says “…in America we don't worship government, we worship God,” when many of his actions mirror that of a justice-obstructing dictator­­, from his flurry of executive orders to his ouster of civil servants who speak up about possible scandal or corruption in his campaign and administration?

Anyone with access to Google knows this about the president. The same media sources he discredits have reported extensively on his actions, not only his words, and university graduates know this. They aren't stupid, and they shouldn't be talked to like they are. Schools shouldn't waste their time or celebratory day. Give the students the inspirational speakers they deserve.