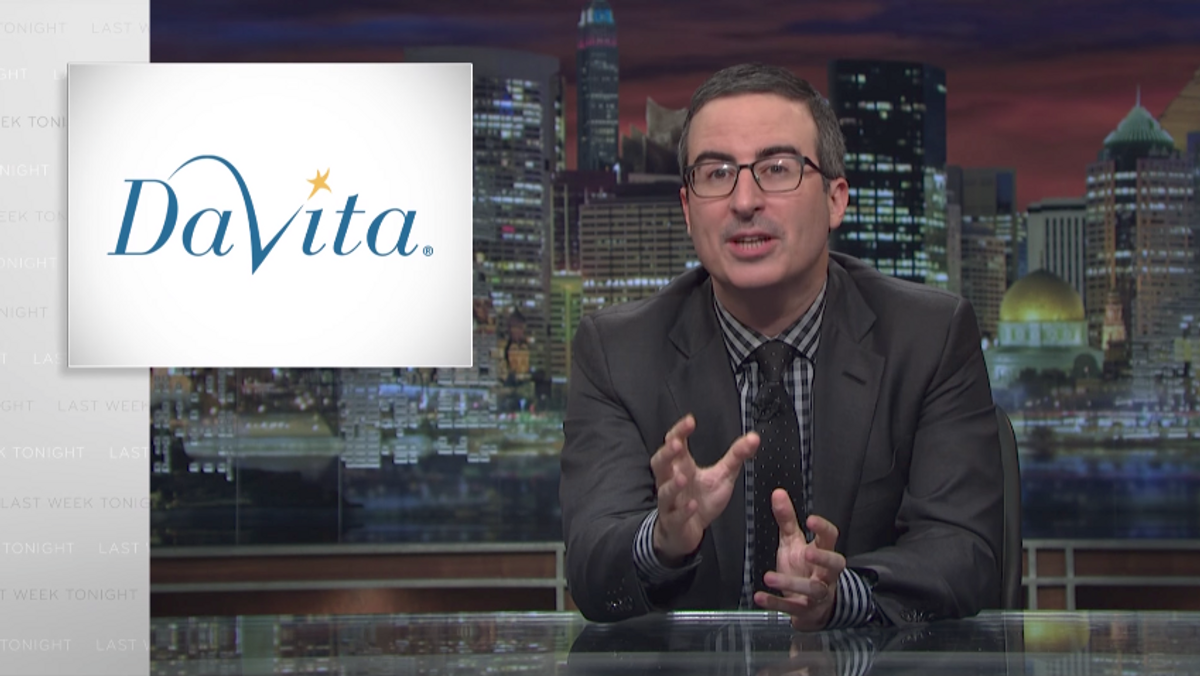 On Sunday, John Oliver broke down for-profit dialysis companies, an industry that many Americans likely haven't paid much attention to. The "Last Week Tonight" host knew that his most of his audience would rather watch "literally anything else" than a segment centered on the treatment of kidney disease, however he promised that the end result would be worth it.

Dialysis is a procedure for patients with kidney disease that purifies a person's blood, but it requires the patient to be attached to a machine for hours at a time, multiple days per week.

"Think of it as a Brita pitcher for your blood, which yes is more disgusting than I needed to make it sounds," Oliver joked. He pointed out that kidney disease is the ninth leading cause of death in the country but despite the U.S. spending the most when compared to other countries, its mortality rate is the highest.

"So we're spending the most, to essentially get the least," Oliver pointed out. "We’re basically paying for a fully loaded Lamborghini and receiving a drunk donkey on roller skates."

A law signed by President Richard Nixon in 1972 said that the government would pay for dialysis for those that needed it. Oliver joked that the U.S. actually has universal, but for only one organ. “It’s like your kidneys and only your kidney are Canadian,” Oliver said. At the time, that bill only covered around 10,000 patients, but now, there are nearly 500,000 people are undergoing dialysis treatments. It's currently costing the government approximately one percent of the federal budget.

Two for-profit companies own an overwhelming majority of the 7,000 outpatient dialysis treatment clinics, Oliver focused on the Denver-based company, DaVita. The late-night comedian highlighted a long history of complaints against the company which included sanitation issues, failing to properly educate patients on the option of a transplant, a lack of employees and more. Oliver also poked fun at the company's CEO, Kent Thiry, who dresses up in strange costumes and cares more about his own employees than the patients his company treats. He once compared running his company as if it were a Taco Bell.

"The care of America's kidneys is way too important to be treated like a fast food experience," Oliver said, encouraging his audience to become registered organ donors. He also called for stronger oversight of dialysis clinics, and better incentives for transplants.