Luke Walker, director of "PACmen," talks about the accidental candidacy and divine mission of Ben Carson 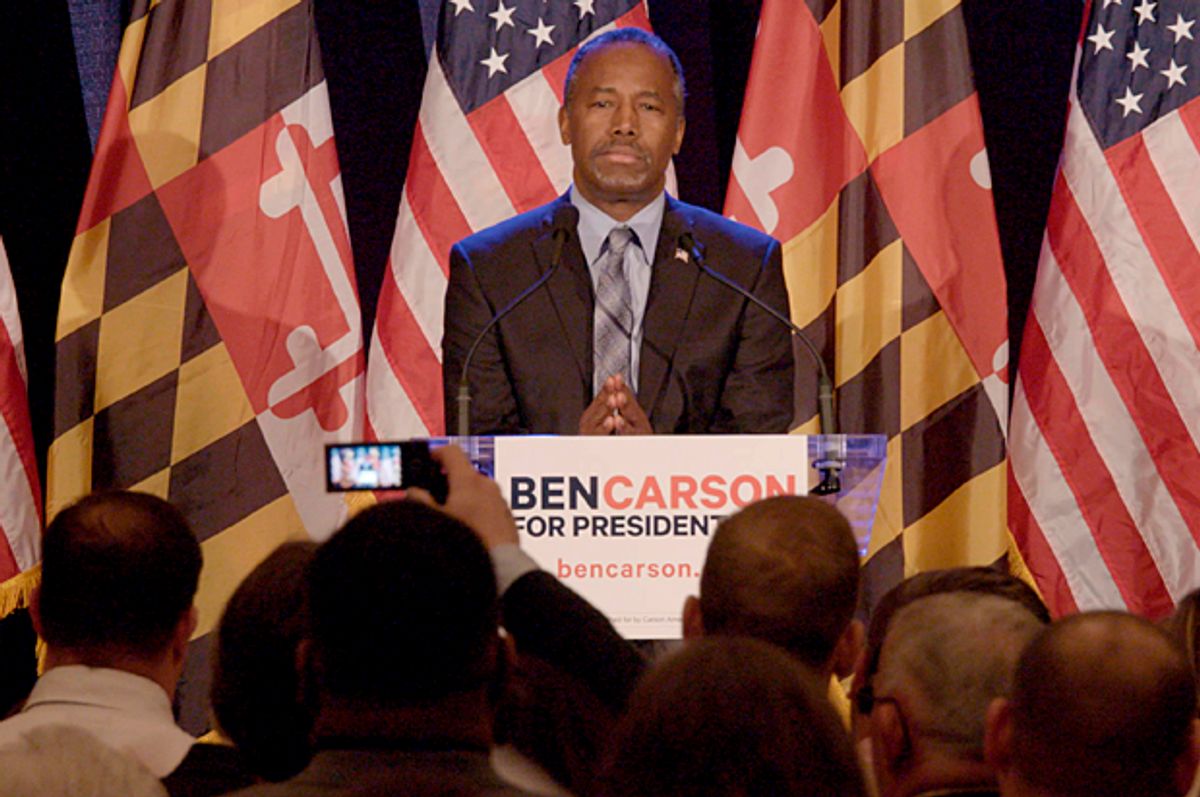 Long before anyone thought that a gaffe-prone, Republican outsider with no political experience could actually win the presidency, documentary director Luke Walker thought it would be interesting to make a campaign film, along the lines of "The War Room" about just such a candidate: Ben Carson. So he tracked down Terry Giles, who was spearheading Carson’s potential campaign. But when Giles changed his efforts toward starting a super PAC to assist Carson, Walker’s film changed focus examine the independent political committees that were unleashed, thanks to a 2010 Supreme Court decision, to raise as much money as they could, as long as they refrained from direct contact with their chosen candidate.

"PACmen," which premiered earlier in the month at the Hot Docs film festival, follows two such organizations, the 2016 Committee, which convinced Carson to run, headed up by John Philip Sousa, and Giles’ Extraordinary America, as they try to propel a candidate with foot-in-mouth disease, whether it’s not knowing where to walk during a debate, referring to Hamas as hummus or suggesting mass-shooting victims should have avoided being shot.

What Walker sees is a man who doesn’t really belong in politics, a "Being There"-like Chauncey Gardiner who has stumbled his way up to Trump’s Cabinet. Salon sat down with the director to get some insight into our unlikely secretary of housing and urban development.

You’ve spent a lot of time thinking about Carson. Can you help us get inside how his mind works?

My focus was on the super PACs. But if I were to help you get inside what I think was the mind of Ben Carson when he was running for president, I’d say that Carson has been cursed. He has been this reluctant savior pursued by people who wanted him to walk down a path that he never coveted or particularly wanted, and yet these paths kept opening up for him. The presidency was one and now the housing secretary [position] is another.

Let’s talk about his super PACs.

What we’ve had because of the super PAC system is the peculiar landscape where peculiar people run for president and anyone who has a narrative that can raise money or a bit of cash in their pocket can interfere with the political system if they want. There’s a constantly recurring motif in the film of the cardboard, cutout Ben Carson. I put that in there for a reason.

How did you choose Carson?

When I looked down the list of Republican candidates and tried to figure out who would be the most interesting story, I looked up Ben Carson, a name I hadn’t recognized, and I looked at his backstory. I thought, “This guy might surprise some people.” Born into poverty, bottom of his class, somehow got to Yale and became a pioneering brain surgeon. And he’s a black Republican, which is very unusual. And the super PACs saw the same thing. Here is a guy who could mess with the demographic and get the presidency back. They took that narrative and pushed it forward like a cardboard cutout, but when you put it on its side, there was no substance. At one point when he was No. 1 in the polls, I thought I was an accidental documentary genius. But it wasn’t long before the air started to come out. There was nothing beyond the narrative.

Couldn’t you say the same thing about Trump?

Yes, exactly but every gaffe that Trump made, made him look like this guy who was going to go to Washington and burn the place down. He looked powerful and like someone who tells it like it is. When Carson made a gaffe, it made him look weak and like a buffoon. It had the opposite effect. Had things gone slightly differently, Carson could have been the anti-establishment candidate.  If he had brushed up on his foreign policy, he could have rode the same movement. There’s an irony that that whole Tea Party revolution was supported and prodded by super PACs. And yet when the election came around, there was nothing more effective that they could spend their money on than Trump’s Twitter thumbs. I think everyone was surprised.

How did the Carson campaign get started?

The 2016 Committee raised $13 [million] or $14 million and that money was used to persuade Carson to run. It all started at the 2013 prayer breakfast with Obama and it excited all of these Tea Party guys, and John Philip Souza thought here’s a guy who could mess with the demographics. And he started selling his story with a Cuba Gooding-starring film in churches and restaurants all around the country. They created the movement through that film and they collected thousands of signatures and sent them to Carson and got him to No. 1 in the polls.

And then Terry Giles’s super PAC was supposed to raise the big bucks with the big-money players but as soon as they started, the gaffes started to come. And they had a very hard time raising money, and we see this long, drawn-out failure, and we ultimately see the rise of Trump through these guys who backed the wrong guy. They think he’s awful and horrendous and are terrified what he may do if he continues to rise, and yet by the end of the film they are trying to get on the Trump bandwagon because he can mess with the demographics in the same way that they had hoped Carson would. And so it’s all about power over principle. It’s about taking power. And so you see there the entire Republican Party in microcosm.

If Hillary Clinton had won, I’m not sure I would have been interested in your film. But because the other loopy outsider, Trump, won, it makes your film totally spot-on and prescient.

You want to know how it happened? Terry was his campaign manager. He said, “Come over; document the campaign.” He then moved over to the super PACs by the time I started filming. And Terry had spent six months preparing a document like that thick on foreign policy. [Indicates with fingers four or so inches.] He had hired all sorts of researchers. He was going to give Carson all of that information. Before he got to do that, Carson was No. 1 in the polls already and Carson, I think, thought that Providence was going to carry him to the White House. He thought that there were cosmic forces at play and he just had to turn up and be himself and he would get to the White House.

Terry went to prepare him but Carson said, “Thank you, but I don’t think we need that.” Had Carson taken those briefings, I think it would have been a very different election. But after Carson didn’t accept them, Terry became less a part of the campaign.

So what are we to make of his being the secretary of housing and urban development?

That’s his curse — to be constantly having pathways that he doesn’t covet. At one point toward the end of the film, he is trying to give his farewell speech and someone shouts out, “I think you’d be a great surgeon general and vice president at the same time.” And Carson says, “I’m not looking for a job.” And the man says, “It’s looking for you.” He is a reluctant savior. He prayed for 10 days on the housing job.

He doesn’t want it. He kept talking about how he was looking forward to retirement. But he sees this as another form of Providence and his duty to fulfill.

But is it God’s will or isn’t this all just because he’s one of the few notable African-American Republicans and they don’t have anyone else to pick from?