Trump digs himself deeper: Given his love of fake news, the "tapes" are probably fake, too

Trump's Nixonian tapes are probably somewhere between a threat and a fantasy. But either way he's in big trouble 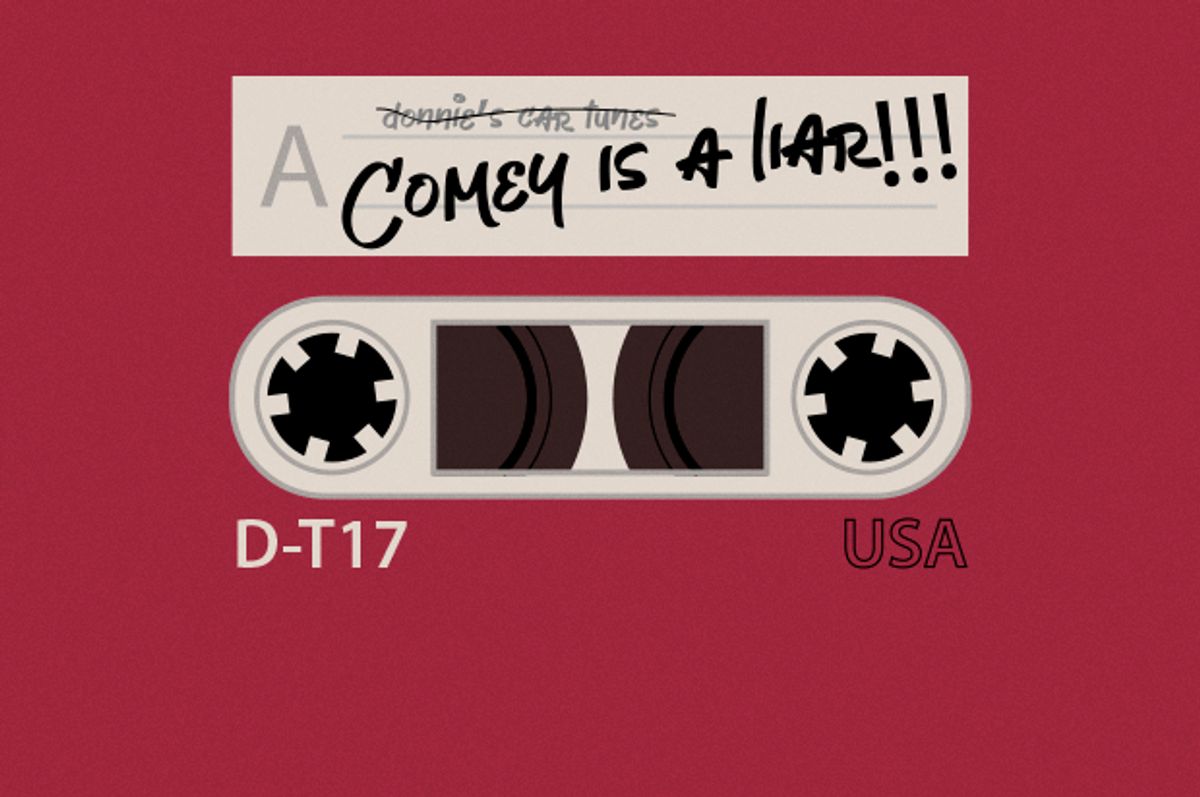 The story goes like this: Not too long ago, deputy national security adviser K.T. McFarland handed President Donald Trump a printout of two Time magazine covers on the topic of the climate crisis. On checking out the covers, the president apparently “got lathered up,” according to a revelatory new article in Politico, over the left’s apparent hypocrisy on the issue. See, the Time cover that set Trump off was a fake, supposedly from the 1970s, that warned of a forthcoming ice age and how to survive it. Contrarily, the more recent and absolutely real cover Time advises us about global warming and how to survive it.

Fortunately for Trump — and, frankly, everyone else — other administration staffers intercepted the president before he could to rant about it on Twitter. Evidently, this sort of thing happens all the time with one predictable response: Trump questions nothing and, as a result, staffers are able to influence his opinions based on whatever pages they slip onto the Resolute Desk. Politico’s Shane Goldmacher reported the following:

The consequences can be tremendous, according to a half-dozen White House officials and others with direct interactions with the president. A news story tucked into Trump’s hands at the right moment can torpedo an appointment or redirect the president’s entire agenda. Current and former Trump officials say Trump can react volcanically to negative press clips, especially those with damaging leaks, becoming engrossed in finding out where they originated.

In other words, Trump loves shiny objects. This could have all kinds of predictable outcomes, none of which can be good considering that he controls the largest military in human history. It’s becoming increasingly obvious that Trump can be easily puppeteered by just about anyone in the West Wing, as long as he or she can successfully plant one of these shiny objects into his stacks.

In another incident reported by Politico, Trump rampaged through the White House about a story handed to him from Chuck C. Johnson’s fake Got News site. You might recall Johnson’s name. He’s the misogynistic disruption blogger who’s been kicked off social media countless times. Johnson has also revealed the name of an alleged rape victim and publicly attacked a State Department official because she suffered from toxic shock syndrome. Yet Trump reportedly believed every word of Johnson’s horrendous gibberish.

Knowing all this, it’s easy to see why Trump is so easily suckered by crackpot stories on "Fox & Friends" and elsewhere, leading the entire world to unravel his cockamamy theories about birth certificates, “wire tapping” and 3 million illegal voters in California. Jesus, I hope no one hands him a copy of Weekly World News; the next FBI director could end up being the “Bat Boy.”

As Reason Magazine’s Matt Welch said on HBO’s "Real Time with Bill Maher," Trump is a low-information voter who miraculously became president. He craves fake news, and eagerly swallows it, while accusing real news of being fake. Although many of his more ludicrous tweets are based on fake news, whether it was slipped onto his desk or overheard while obsessively watching Brian Kilmeade and the other giggling couch tumors on Fox News' morning show, Trump also dabbles in the manufacturing of fake news to suit his ham-fisted trickery.

In the case of Trump's tweeted threat to former FBI Director James Comey, the president may very well have been lying about secretly recording their conversations. Last week the president tweeted: “James Comey better hope that there are no 'tapes' of our conversations before he starts leaking to the press!”

It’s difficult to know exactly how to peg something this insane. Trump is either generating more fake news by falsely hinting at a secret Nixon-style recording system in the White House or he’s actually been recording his meetings all along, like an idiot, not fully realizing that the existence of an eerily comparable system signified the brutal end of the Nixon presidency. Given the endless menu of crazy things that Trump has tweeted or spoken out loud over the years, I tend to believe there is no secret recording system and this is another instance of his superficial, transparently obvious attempts at intimidation. The alternative — that he really did “tape” his conversations with Comey (and possibly others) and then stupidly spilled the beans by tweeting about it — is almost too dumb even for Trump.

If the “tapes” story is fake, Trump has potentially opened himself up to obstruction of justice charges as well as witness tampering, given that Comey will surely continue to be a figure in the ongoing Trump-Russia investigation, leading — we can only hope! — to the prosecution of Trump and his posse. If the “tapes” are real, however, Trump has first of all opened himself up to obstruction charges and the like, but has also potentially incriminated himself on a wide variety of topics, including but not limited to the Russian connection, by creating recordings of lord-only-knows-what. He’ll be remembered by history as the president who thought it would be a smart idea to repeat the fatal errors of Nixon — who today looks far, far better by contrast. Maybe, if Trump's presidency survives, he’ll try selling arms for hostages next or lying under oath about oral sex, just to keep us guessing.

Even more disturbing is the reality that Trump thinks this is all smart politics. He thinks he’s doing a fantastic job — very, very terrific — the best 100 days ever, etc. No wonder he was able to stare into a camera and say, “Trump steaks are the world’s greatest steaks, and I mean that in every sense of the word.” No, they’re not, and no, he doesn’t. He simply believes his fanboys are too dumb to know the difference (and maybe they are). He thinks it’s perfectly acceptable to ballyhoo his presidency with the same level of marketing hype that he used to promote his failed licensing deals. Trump also appears to believe that he can run one-third of the federal government with the same management style he used for a midlevel family business.

One last thing: Remember when Trump apparently masqueraded as his own public relations representative, “John Miller”? I wouldn’t rule out the possibility that Trump might fabricate a recording of himself with Comey — perhaps with Trump doing both voices. Weirder things have happened in Trump World. Anything’s possible from a guy who would publicly confess to firing Comey to stop the Russia probe while also hinting at a clandestine recording system that may not be real. He’s only making matters worse for himself. Whether by swallowing and regurgitating fake news or confessing to possible high crimes, Donald Trump continues to relentlessly dig himself ever more deeply into a presidency-ending hole.