Scandal whirlwind: If Trump tried to shut down the FBI's Michael Flynn investigation, did Jeff Sessions play along? 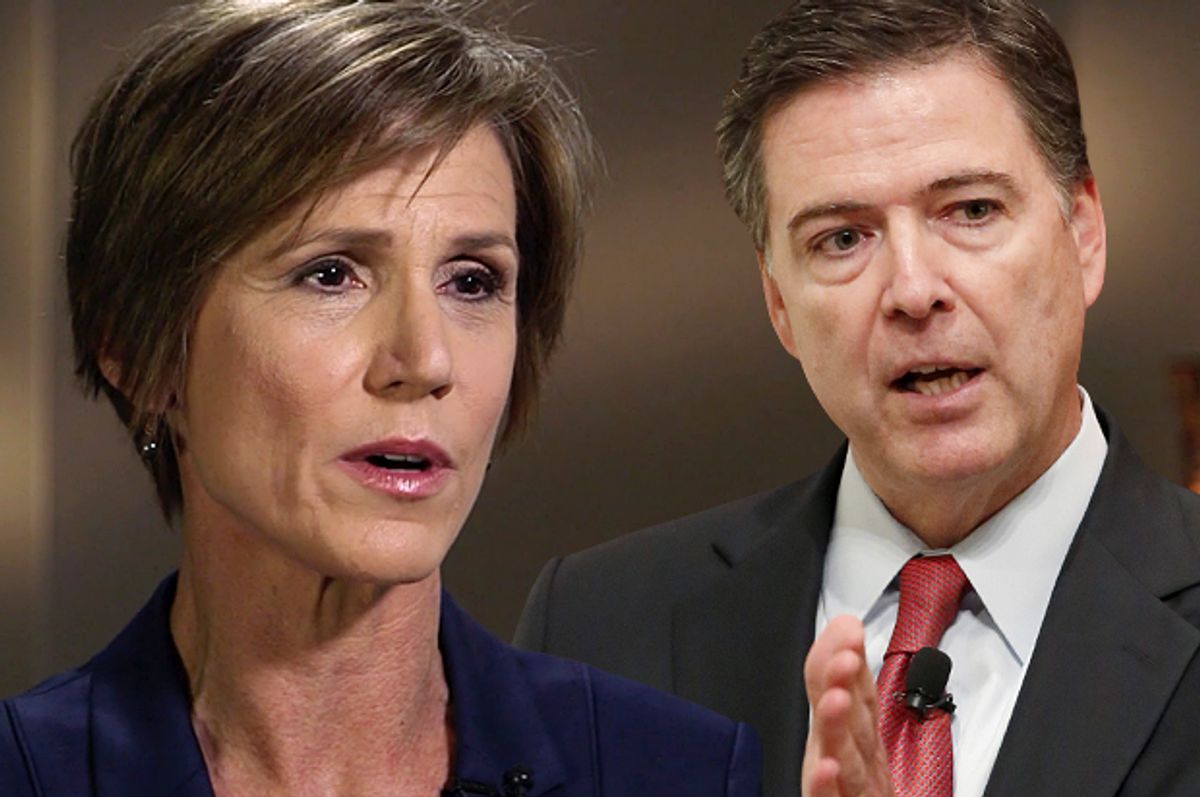 Tuesday began with the White House in total chaos over reports that President Donald Trump had spilled sensitive intelligence to the Russians on the morning after he fired FBI Director James Comey over what he later admitted was the investigation into Russian ties to the Trump campaign. This was not what administration officials wanted to be talking about in the days before the president's first big overseas trip. In the middle of the crisis, they had to hold a previously scheduled meeting and press conference with Turkish President Recep Tayyip Erdogan. Here's the dispatch from the pool report:

Shortly after that, Israel's media reported that it had been that nation's intelligence that Trump had shared with Russia without permission, justifying Israeli officials' earlier fears that he would do exactly that.

Yes, it was that kind of day.

Every Democratic official's hair was was on fire and even the Republicans on the Hill were starting to smoke a little bit around the ears. Senate Majority Leader Mitch McConnell, who goes along with every Trump outrage, even roused himself to declare that he wished there was less drama coming from the White House.

And then came the really shocking news. James Comey wrote memos — detailed memos. And he gave copies to friends. And one of them described a meeting with the president, vice president and Attorney General Jeff Sessions on the day after Flynn was fired. That meeting had been previously reported. What we hadn't heard was that, according to Comey, after the meeting Trump told Pence and Sessions to leave the room and then asked Comey to drop the case against Flynn.

Mr. Trump told Mr. Comey that Mr. Flynn had done nothing wrong, according to the memo.

The White House is saying there's nothing untoward about this: Everyone knows Trump likes Flynn, he didn't said those exact words and anyway Comey should have brought this up earlier. In other words, Comey must be lying because otherwise he would have shouted it to the world. Most experts on TV observed that isn't the way investigations are done.

CNN's Jake Tapper spoke with a source who is familiar with the memos and close to Comey. That source said the FBI director had assumed that one meeting would be the end of it. Tapper quoted this person explaining why Comey didn't say anything:

It should be noted that [Comey] is somebody, and I don't mean this in a pejorative sense, he is somebody who has rather high regard for his own sense of integrity and what he can accomplish.

Later on Tuesday during CNN's Anderson Cooper's interview with former acting Attorney General Sally Yates, she responded to the question of whether Comey was a "showboat" and a "grandstander," as Trump had claimed, by smiling slightly and simply saying, "Jim is candid."

Coincidentally, on the morning of the interview with NBC News' Lester Holt when Trump used those words to describe Comey, I had published a piece for Salon in which I also called him a "showboat." It's true. He is. And Comey's high regard for his own integrity and rectitude has led him to make terrible political judgments, such as the one that led him to announce on Oct. 28 that there was new information in the Clinton email case, throwing a live grenade into the presidential campaign.

But for all that, James Comey isn't known to be a liar. In fact, he's known to be a scrupulous if somewhat supercilious prig. Donald Trump, on the other hand, is a constant, unrepentant liar of colossal magnitude. In a battle between the two grandstanders there is no contest as to which one has more credibility.

The White House also attempted to use the words of scting FBI Director Andy McCabe as cover, saying he testified before Congress that the administration had not interfered. That's not what he said. Here is the exchange between McCabe and Sen. Marco Rubio:

Rubio: Mr. McCabe, can you — without going into the specific of any individual investigation, I think the American people want to know, has the dismissal of Mr. Comey in any way impeded, interrupted, stopped or negatively impacted any of the work, any investigation, or any ongoing projects at the Federal Bureau of Investigation?

McCabe was replying to a question about whether the investigation had been impeded by Comey's firing. He clarified further by saying, "there has has been no effort . . . today."

For the moment, all eyes will be upon the new deputy attorney general, Rod Rosenstein, who is overseeing the investigation, and his boss, Jeff Sessions, who is vetting Comey's replacement. Sessions is obviously a Trump loyalist and it appears that Rosenstein has no complaints. According to the Baltimore Sun, when the news broke that Trump was using his memo as the excuse for firing Comey, a friend told Rosenstein he should quit and he replied, "There is no place I would rather be."

The Washington Post reported late on Tuesday that its sources had told the publication that "details of Comey’s notes have been shared with a very small circle of people at the FBI and Justice Department." If the people with whom those notes were shared include Sessions and Rosenstein, their involvement in Comey's firing takes this scandal to a whole new level. It would mean they knew that Trump had tried to shut down an active investigation by asking Comey to lay off Flynn — and still recommended that Trump fire Comey. Stay tuned.