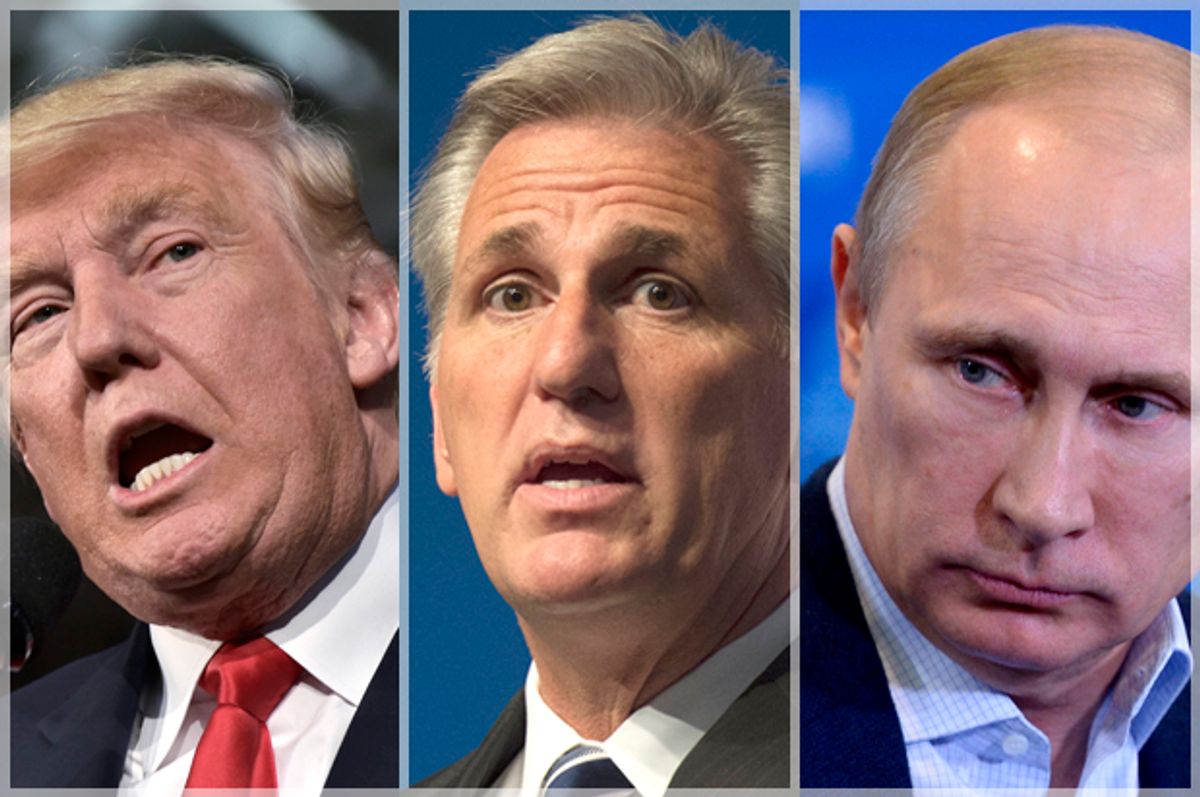 After a pair of blockbuster reports this week about Donald Trump’s possible ties with Russia, including his sharing “highly classified” intelligence with the Russian ambassador, Republicans in Congress have come under increased pressure to distance themselves from the White House. These unusual circumstances make even more remarkable the discovery of a secret recording that reveals top that House GOP leaders were joking about Trump’s ties to Russia, as reported by The Washington Post late on Wednesday.

The audio was reportedly recorded after a meeting with the Ukrainian prime minister in Washington, D.C. last year. The Post published a full transcript of the publication tape here.

"There's two people I think Putin pays: [GOP Rep. Dana] Rohrabacher and Trump," the California Republican said, according to the June recording that the newspaper reported it "listened to and verified."

When some of his audience laughed at the comments, McCarthy added: "Swear to God!"

The Post reported that House Speaker Paul Ryan, R-Wis., stopped the conversation immediately and made the GOP members present swear to secrecy.

“No leaks,” Ryan said. “This is how we know we’re a real family here.”

Rep. Steve Scalise, the majority whip, chimed in: "That's how you know that we're tight."

In a tweet on Wednesday, a Ryan spokesman, Brendan Buck, said McCarthy "was just kidding" and that "no one took it seriously."

Once Buck was informed, however, "that The Post would cite a recording of the exchange,” the paper noted, Buck changed his tune:

“This entire year-old exchange was clearly an attempt at humor," Buck said. "No one believed the majority leader was seriously asserting that Donald Trump or any of our members were being paid by the Russians. What’s more, the speaker and leadership team have repeatedly spoken out against Russia’s interference in our election, and the House continues to investigate that activity.”

For his part, congressman and fervent Putin supporter Dana Rohrabacher, R.-Calif., backed up McCarthy on Wednesday.

“He misspoke, my gosh. Like I've never misspoke? I've been here 30 years. You've got to be very careful when you're using humor," Rohrabacher told The Daily Beast.