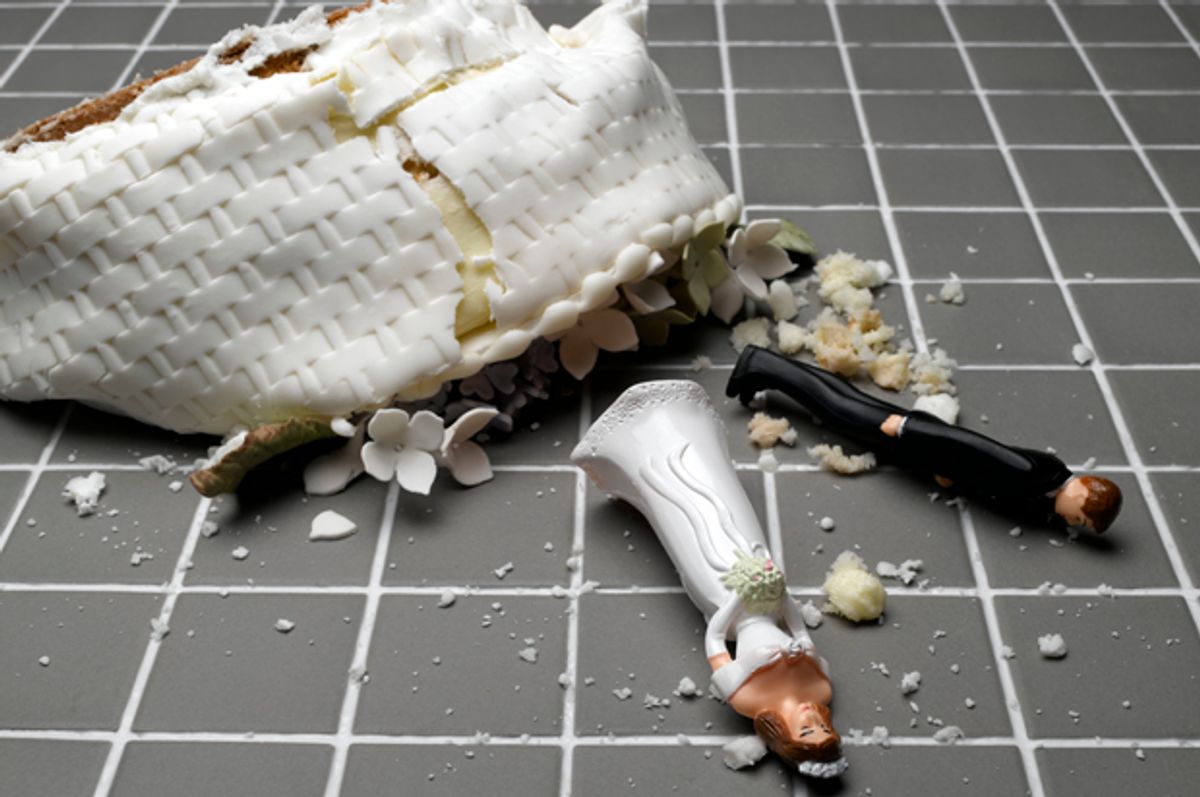 One of the most dramatic and controversial social trends in recent decades has been the widespread decoupling of marriage and childbearing. While the unmarried childbearing rate declined slightly in 2015 from a high in 2008, 40 percent of the U.S. women giving birth were unmarried — with the rate being even higher for women without a college degree.

There are a lot of theories about why this is true. But one widespread theory is that declining fortunes for the working class and increased income inequality have resulted in a dearth of marriageable men. Women have told polling firms like the Pew Research Center that they want to marry a man with a steady job: So if they become pregnant, the theory goes, they will decline to marry the father until he has improved economic prospects. In turn, this theory suggests that steady, better-paying jobs in a community should lead to higher marriage rates.

But a new paper published in the National Bureau of Economic Research cast cold water on that idea. In a clever move, researchers looked at parts of the country with a boom in fracking, bringing new jobs in the oil and gas industries and an uptick in wages for working-class men. People in such areas did have more children, but contrary to researchers' expectations, the marriage rate did not rise.

“When I’ve been asked, from a policy point of view, what we should do to improve the family formation for low-income folks, my answer has tended to be, well, we need to focus on the economic opportunities and improve the economic activities for these individuals," said Melissa Kearney, the paper's lead author and an economics professor at the University of Maryland, over the phone.

Instead, she said, she found wage increases "did not have the impact on family formation that I expected."

This paper doesn't mean, however, that economics plays no role in people's attitudes toward marriage, according to Kearney.

In other words, women in larger numbers may have begun choosing single motherhood  out of perceived economic necessity, believing that their male partners weren't steady enough to marry. But although the idea of single motherhood has become more normalized, women haven't necessarily been more eager to marry, even if men are starting to make better money.

Social conservatives will no doubt blame contemporary culture, arguing that everything from birth control to online pornography and hip-hop is somehow causing a decline in morality that's leading directly to this decline in the rate of marriage. It's a popular argument echoed by many right-wing pundits, from Ross Douthat of The New York Times to accused serial sexual harasser Bill O'Reilly.

But there's a more nuanced way to look at this social shift, which is that it's yet another sign that men aren't adapting as well to changing social mores as women. According to this theory, women have embraced paid employment and independence, and that has resulted in rising expectations about what they want from a marriage.

As author Rebecca Traister noted in a 2016 interview with NPR, "The choice not to marry isn't necessarily a conscious rejection of marriage" but may be about "the ability to live singly if an appealing marriage option doesn't come along."

In an era of women's growing independence, for a man to be marriageable it's not enough to have a steady job. What women want in a partner isn't really well measured, unfortunately. But it's safe to guess that in our era of growing feminism the likely answers include more respect, greater equality and a sense of partnership. Women are not rejecting marriage so much as they are rejecting old-fashioned marriage norms, whereby the man provides economically and the woman is expected to be submissive. If women don't think men are interested in meeting these expectations, then women are going to be less interested in marriage.

This theory could even help explain the class differences surrounding childbearing by unmarried women.

That suggests college-educated women are more likely to hold out for the right guy before they get pregnant. That isn't particularly surprising, considering the statistics around unintended pregnancy.

To be sure, one of the findings of Kearney's research, is that higher wages correlated with increased childbearing rates in the communities she studied. But as Kearney noted, both married and unmarried people had more kids. This is just further proof of growth of the belief that being married is not a prerequisite for having kids, although the research also suggests people are more inclined to have kids if they think they can afford them.

“As an economist, these results are kind of sobering because we don’t have much to say about changing attitudes and culture," Kearney said, noting that there's no obvious policy proposal that's equipped to deal with the fact that women may want more out of marriage than men are ready to give. Marriage has a number of benefits for both men and women in the abstract, but when any individual rejects a marriage, he or she usually does so for good reasons. This might be a change that society has to adapt to, rather than seeking to pressure men and women into tying the knot when they don't want to.