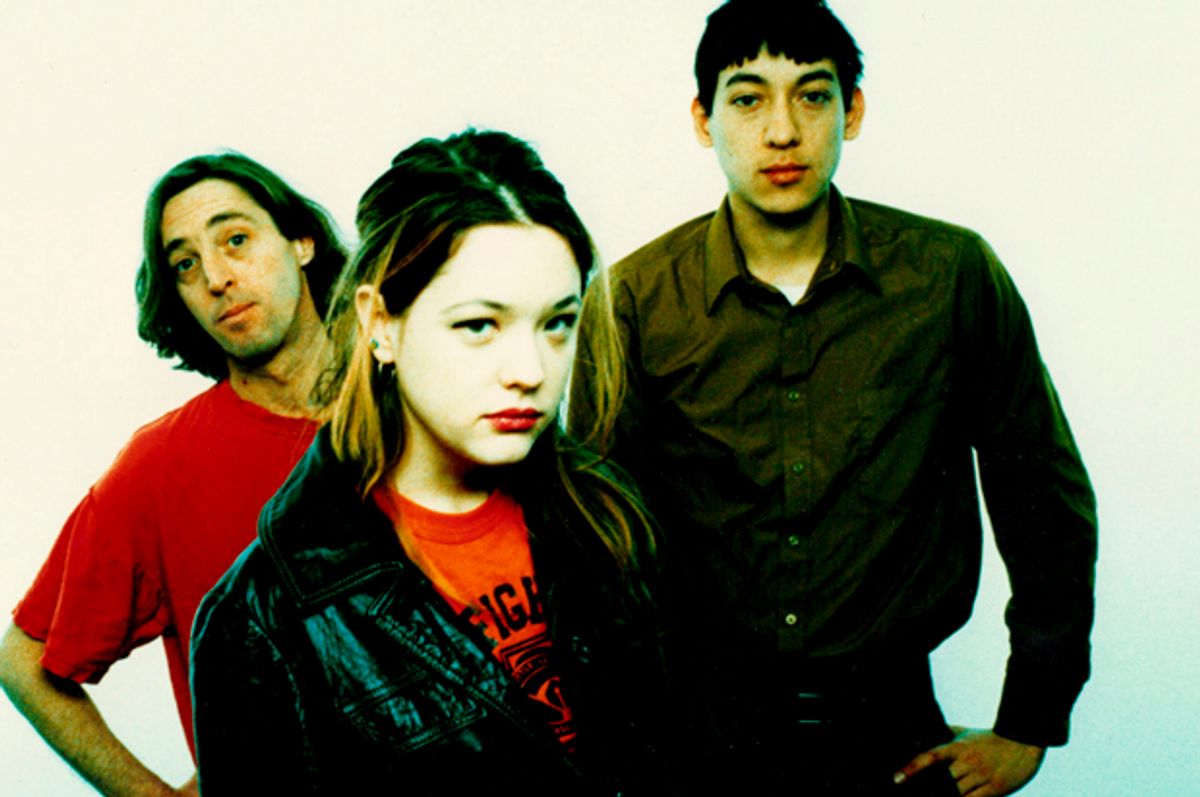 The arcing melodies on notable "Dirt of Luck" songs such as "Pat's Trick" and "Honeycomb" contort like a kite twisting in the sky, as Timony's dusky voice and noisy guitar hum add a steadying presence. On "The Magic City" LP, meanwhile, the  band's arrangements are tightened up but remain no less bewitching. Helium's music feels like it exists in the time between sleep and wakefulness; it's dreamlike but vibrant.

Today Timony describes the process of collecting the material found on "Ends With And" as a "treasure hunt project." To form a comprehensive time capsule of this era, Timony reached out to fans for rare audio, spent time tracking down credits for candid photos and sifted through her own collection of tapes.

In June Timony and two members of the band Hospitality (Brian Bettencourt and David Christian) will embark on a tour, playing songs from both albums. "It's really interesting to take these songs and play them now," Timony told Salon. "There's only a couple that feel '90s to me. I don't know what they are — I don't feel like I'm revisiting this phase. It's more just like it's fun and interesting. The people I'm playing with are so great."

Timony, who says she's also gearing up to write another record with current band Ex Hex, called Salon from her Washington, D.C., home to talk about revisiting Helium.

How did the reissue campaign come about?

I had talked to Matador a few times in the last 10 years about reissuing the records. It seemed to be the right time. I just kept hearing from people that you couldn't find the vinyl anymore, and so I talked to Matador about making the vinyl available. But Patrick [Amory, Matador Records general manager,] had the idea of also releasing stuff on vinyl that had never been out before, like the EPs and 7-inches. That's how it came about.

And then we're like, "Well, we're putting this out. We might as well make it a double LP, and try to put as much stuff on there as we can." So then it turned into a real big treasure hunt project for me. Obviously, the stuff that has been out on Matador — it was all there. They're very good at saving things. The stuff that was smaller, like a couple of 7 inches we did — actually, a bunch of 7 inches — were harder to find. And then I spent a lot of time searching for demos, four-track things and live stuff. That was actually what took me the most time, even though it takes up the smallest amount of space on the record that's coming out. It was fun looking through everything.

Do you have an archive? Or is it one of those things where you're like, "Wow, this is in a box somewhere; I don't know where it is"?

Uh, something where I have no idea where it is. [Laughs.] I don't throw music stuff away really, but I'm not someone who's ever taken myself seriously enough to actually organize my own historical record of my music. It all ends up in a tape vortex in my basement. But now I've realized I have to document that stuff better because otherwise it's just gone. I definitely realize how fragile music is.

Even "The Dirt of Luck" — we couldn't find the master tapes for the record; it took a while. It was there, at Matador, but all we could find at first was a cassette version of [the masters]. We tried to make a master from that, and it sounded horrible. It wasn't as easy as I thought it would be.

As you were going through the photos and music, what memories did that dredge up for you?

The thing I feel was hardest for me was listening to material that I was never happy with at the time. And it still makes me feel embarrassed. [Laughs.] Some of the stuff Helium did when we were first starting out — my voice is really out of tune. That was hard to listen to. [Laughs.] I was able to see it a little more objectively now as something I did a long time ago. It wasn't as cringe inducing as I felt like it was at first.

It wasn't as painful as I would've thought. It was pretty fun getting all the music in one place. There's a lot of stuff I always loved that I was able to put on this record: random stuff that was from compilations, and some songs Ash and I did together under our first band name called Led Byrd, that nobody had ever really heard because they came out on pretty obscure 7-inch labels at the time. It made me really happy to get that stuff on the record. That was the most fun part of it, was saving stuff that would be otherwise totally lost.

Is there anything you wanted to find [and] you couldn't find or that you knew you had . . . somewhere and it just didn't surface?

Anyway, somebody had on their computer a copy of this song that we had written. So that was pretty exciting for me to find that. Although, you know, the recording's really shitty, and probably no one will care except for me. [Laughs.] For me, it was like your lost baby or something. [Laughs.] I finally have a copy of it. But anyway it is going to be a bonus track and it was really awesome that someone helped me out and it was really nice to find it.

How did you let go and not want to go back in and fix your vocals or redo them? Was it difficult to stop yourself from doing that?

Purely just that it's physically impossible, probably. [Laughs.] Because I don't know where the tapes are, and money and time and stuff like that. Yeah. The first Helium EP, "Pirate Prude" — there's some songs on there I actually left off of the record because the vocals bothered me. I mean if I could go back and remix that stuff, that would be really cool because then I could just turn the vocals down and I think it would be better. But I can't because I don't know where the tapes are. [Laughs.] And just even, like, maybe the tapes have disintegrated. There's physical restraints. Believe me, if it was easy to do, I would've tried. [Laughs.]

People are excited about these reissues and the Helium shows. It's that phenomenon where, when a band is not around or they're broken up, they take [on] new meaning and get more fans. It's been really mind-blowing for me to see bands I used to like that are now 10 times more popular because they're not around.

I have no idea how people are going to react to this. I mean I decided to do shows — because that's a good thing to do when your record's coming out — and Matador was encouraging me.  I wasn't sure how to do it, and I reached out to Ash and Shawn to try to make an actual reunion happen for a while. But Ash can't do it. He's got too much stuff going on. He's got a family or a job he can't leave to tour really. We could do one-off shows. But anyway, Shawn really, really wanted to do it, but then it didn't really make sense without Ash.

I decided the easiest thing to do was play the songs as myself with a different band. I was like, "Let's play 200-capacity rooms" because you just never know. The New York shows all sold out really fast. Eight hundred people bought tickets in like two days or something.

I feel like Helium, in an abstract way, does have a pretty big influence on modern indie rock, in terms of certain sounds and textures. I definitely hear the band's influence.

I don't know. I have no idea. I feel like we could've been much more popular if we had made different decisions about how to run a band. Brian [Dunton, the bassist,] was a really good business person, but after he was gone, we purely made decisions from the standpoint of like . . .  It was always not-great business decisions like "We don't like touring; it interferes with us writing songs" or "It's too hard." We never really cared about how many people bought the records. We made decisions only based on art usually.

At the time, if we really cared about selling records, we would have made different decisions, and I think the band would have sold a lot more records probably. At the same time, now that I look back on it, I don't regret that stuff at all. I'm glad that we stayed true to ourselves artistically. That's my favorite part about the band now.