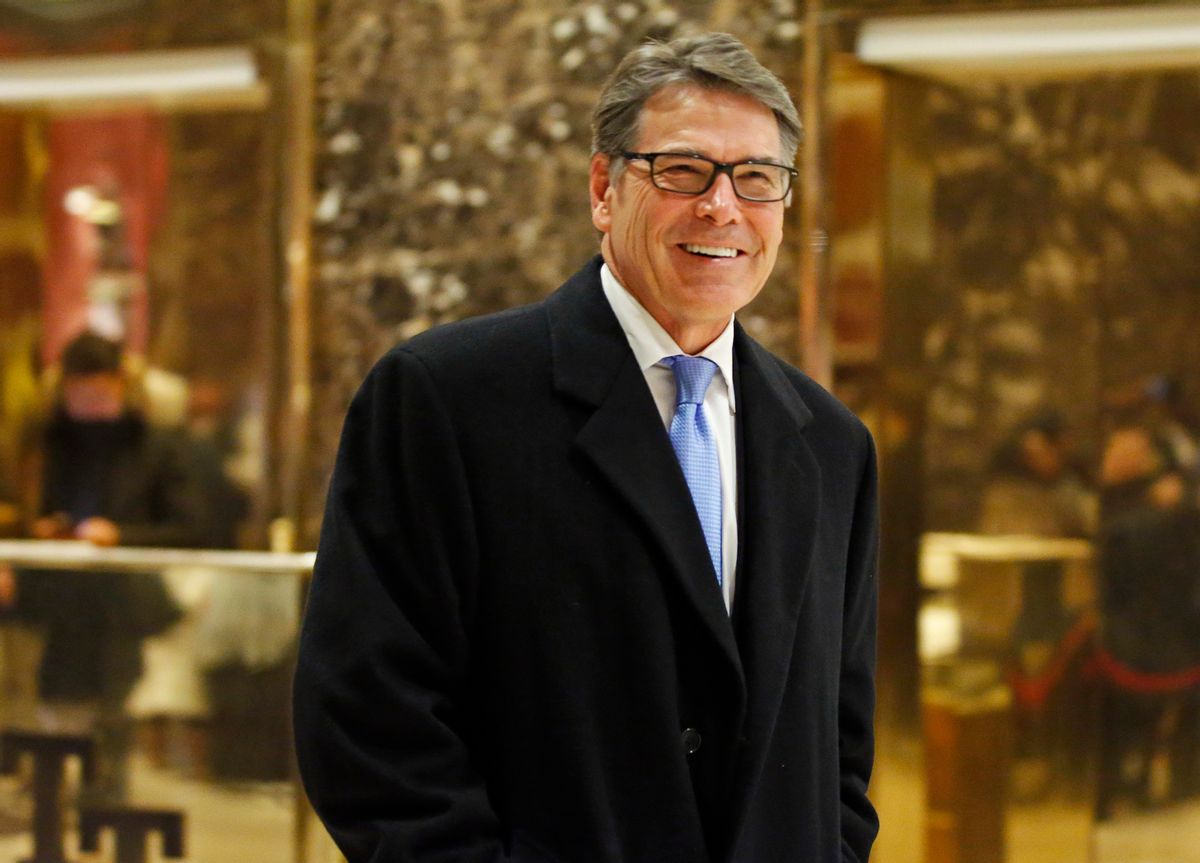 Most people who know anything about Rick Perry know he’s a friend to the fossil fuel industry. For 14 years, he was the Republican governor of Texas, a state that contains one-third of the nation’s oil reserves and is home to oil giants ConocoPhillips, ExxonMobil and Valero Energy. As a political candidate, Perry received millions in donations from oil and gas companies and their executives. Until recently, he was a board member of Energy Transfer Partners, the co-owner of the dirty tar sands oil transport mechanism, Dakota Access Pipeline, which was approved by Donald Trump in January and runs through Native American lands in North Dakota.

Perry supported new coal plants in Texas as well, but he also allowed a major expansion of wind energy and signed a renewable portfolio standard that aided growth in that industry. He appears to favor an all-of-the-above approach to energy production, as opposed to the severely anti-clean energy agenda Trump projects and which the conservative Heritage Foundation hoped he would adhere to. In the past, however, Perry called the science of climate change a "contrived phony mess.”

Now, as head of the Department of Energy — an agency he wanted to eliminate during his 2012 presidential bid (and the name of which he famously forgot in a televised debate) — Perry seems to be welcoming climate-change deniers into his fold while at the same time sticking up for the department’s energy efficiency and renewables programs.

The Department of Energy made headlines when disaster was narrowly averted after a tunnel collapsed at a nuclear site in Washington state and when Perry refused to join the other G7 nations in a joint climate accord at a summit in Italy.

Here’s what’s been going on behind the scenes at the Department of Energy in its first six weeks under Perry.

At least three staffers from conservative, anti-clean energy think tanks now have roles in the Energy Department. This comes after Thomas Pyle, a former Koch Industries lobbyist, ran Trump’s transition team for the department. Pyle is president of the Institute for Energy Research (IER), a think tank co-founded and partially funded by fossil fuel industrialist Charles Koch, as well as its advocacy arm, the American Energy Alliance. A leaked Pyle memo obtained by the Center for Media and Democracy from December revealed Trump’s energy plan, a “fossil fuel industry wish list.”

Fisher was once an intern at the John Locke Foundation, one of several North Carolina-based think tanks founded and funded by close Koch ally Art Pope.

On April 14, Perry issued a memo requesting a study, to be overseen by Fisher, on whether clean energy programs are hindering coal and nuclear programs. The study has caught fire from the left, with a group of Democratic senators writingto Perry with serious concerns, calling it “a thinly disguised attempt to promote less economic electric generation technologies, such as coal and nuclear, at the expense of cost-competitive wind and solar power.”

They wrote, “The notion that a 60-day review conducted by ideologues associated with a Koch brothers-affiliated think tank should supplant research and analysis conducted by the world’s foremost scientists and engineers would be a grave disservice to American taxpayers.”

Chief of staff to Perry is Brian McCormack, former vice president of political and external affairs at the Edison Electric Institute, an influential trade group for investor-owned electric utilities that has attacked residential solar access and opposed renewable energy targets and the 2007 Clean Water Restoration Act, according to SourceWatch. While there, McCormack was a key player in the institute’s campaign to take down rooftop solar energy. EEI’s PAC, funded mostly by employees in the fossil fuel industry, gives the majority of its campaign donations to Republican candidates and PACs, and the group funds independent super PACs and political nonprofits as well. At DOE, McCormack will likely help shape the future of several of the departments’ solar programs.

On May 3, the Department of Energy hired another Institute for Energy Research alum, Dan Simmons, to head the Office of Efficiency and Renewable Energy, which Trump wants to cut by 70 percent and the Heritage Foundation wants to eliminate entirely. As vice president of policy at IER, he attacked subsidies for rooftop solar and called for increased fossil fuel exploration on federal lands.

Simmons also directed the Natural Resources Task Force of the American Legislative Exchange Council, a conservative “bill mill” where politicians and big-business representatives, many from fossil fuel companies, work together to craft model legislation that will boost corporate profits. Finally, Simmons was a research fellow at the heavily Koch-funded Mercatus Center at George Mason University.

Now he’ll oversee a major DOE office in charge of grants, competitions and initiatives including solar funding program SolarShot and efficiency program Energy Star, which is operated by both the DOE and the Environmental Protection Association (which, in turn, is led by fossil fuel shill Scott Pruitt, who has wanted to shutter the agency for some time).

Who else will carry out the Energy Department’s agenda is largely unknown, as most top department officials are only temporary appointees. Trump has yet to nominate anyone for 20 out of 22 top Energy positions, in keeping with his slow nomination process: Out of 557 key positions requiring Senate confirmation, Trump has put forth a mere 49 nominees, according to the Washington Post.

Aside from ordering the study on coal and nuclear energy, Perry has done other things that were surely hailed by fossil fuel companies. For instance, the new Energy secretary refused to join the six other nations at the April G7 summit in signing joint declaration reaffirming commitments to the 2015 Paris Agreement on climate. Perry found out there that opposing the agreement will have significant diplomatic and political consequences; he was met with foreign diplomats who voiced concerns that the U.S. will slow down its renewable energy production, thus hampering international efforts at combatting climate change.

A Perry Push for Energy Efficiency?

While the signs are not very good for clean energy expansion or significant reduction of greenhouse gas emissions any time soon, it seems, at least for now, that a sliver of the Energy budget will still go toward efficiency and clean energy efforts.

According to Clean Technica, Perry has been “trolling his deputy” by aggressively promoting its energy efficiency programs. Although Trump wanted to kill Energy Star, which sets efficiency standards for appliances and buildings, the DOE has been regularly posting blogs about energy efficiency jobs and touting renewables on social media, including from Perry’s own Twitter account. If the EPA and the Department of Education crumble as planned, perhaps vestiges of the Department of Energy will remain.

Over in the State Department, Rex Tillerson, who worked for 40 years at Exxon, the oil company that dangerously misled the world on climate change, recently signed an international declaration recognizing climate change, despite the many powerful climate change deniers in the White House.

Don’t expect Perry to be a warrior for clean energy, but look for instances where he may do things that are out of step with the goals of Trump, Pruitt and other members of the opposed-to-any-form-of-green-energy cohort.