As Trump told Comey, he'd love to emulate his pals Erdogan, Duterte and Putin and crack down on press freedom 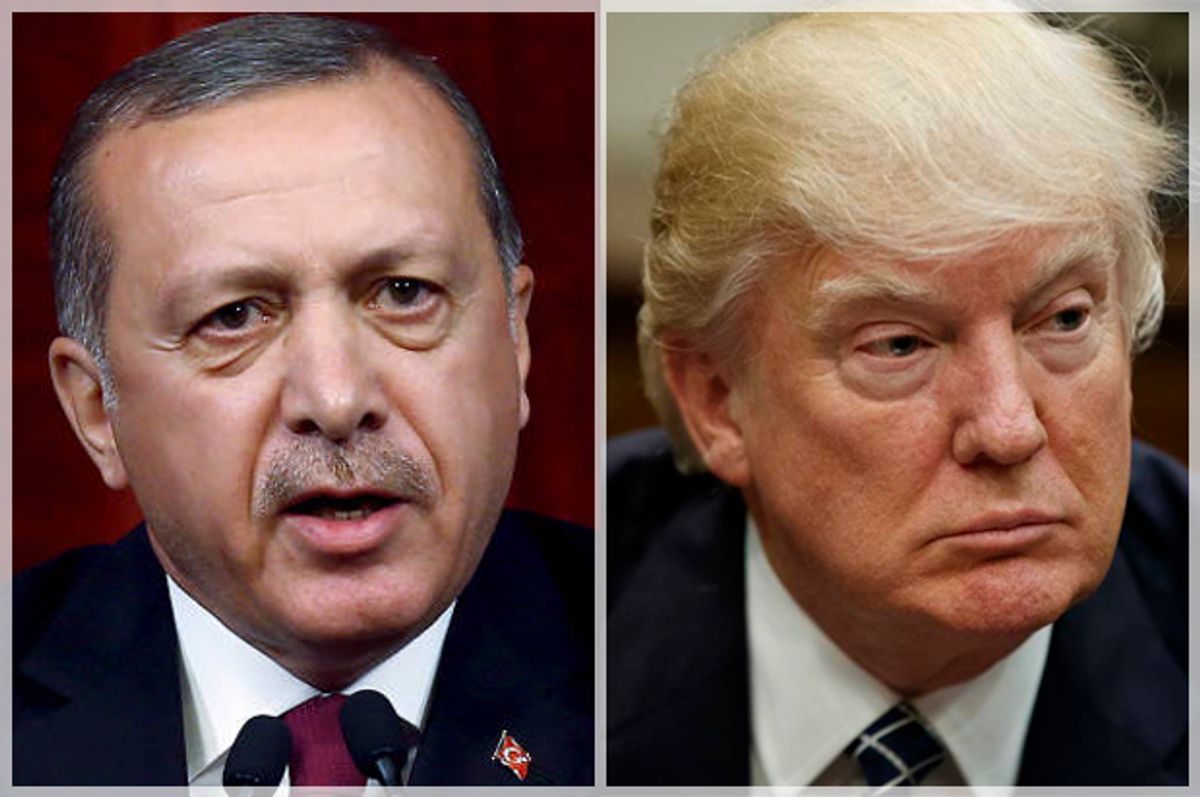 President Donald Trump had a news conference with the Colombian president on Thursday when he said, among other things, "There is no collusion between certainly myself and my campaign, but I can always speak for myself — and the Russians, zero.” No, those are not remarks translated into Spanish by Colombian reporters and then back again. He actually said that.

To be fair, what Trump seems to have meant was that he and his campaign had not colluded with the Russians. And for the first time he appears to have made a disclaimer that he is only speaking for himself. Still, it's so garbled that he could have meant almost anything, including that he literally always speaks for himself and the Russians.

In the past few days, Trump's persecution complex has reached new heights. At his commencement address to the Coast Guard Academy on Wednesday he lamented, "Look at the way I’ve been treated lately, especially by the media. No politician in history — and I say this with great surety — has been treated worse or more unfairly." He has taken to calling the Russian investigations a "witch hunt," even going so far as to boast about it on Twitter on Thursday morning:

Naturally he thinks he's been targeted in the biggest and greatest witch hunt ever. Apparently, he doesn't know that there were real witch hunts where people were killed and political witch hunts that destroyed lives of many innocent people. He is certainly unaware that there were leaders who suffered at the hands of political opponents in ways that Trump in his golden palaces eating his two scoops of ice cream and extra sauce every night can only imagine.

I have never seen a more whiny, petulant 70-year-old person in my life. In that one respect Donald Trump may indeed hold the title of "the greatest."

You will notice that Trump's main nemesis is still the press, which he has villainized since he began his recent presidential campaign. One suspects that this started out as a shtick, building on the thousands of hours of talk-radio research that his lieutenant at the time, Sam Nunberg, provided him. Beating up on the press is a staple of right-wing media and it receives a huge response from conservative crowds. But until he started the campaign Trump had always reveled in media attention and went to great lengths to draw it. In fact, he considered himself a member of the club. But over the course of time the hatred has obviously become very real and very personal. He loathes the press and considers it the source of all his problems.

Obviously, he isn't the first president to feel this way. Richard Nixon famously kept an enemies list that included a large number of journalists. But Trump is taking this in a dangerous direction. A New York Times story about a James Comey memo rightly focused on the fact that the president may have tried to obstruct justice by taking the FBI director aside privately to ask him to let Trump's disgraced former national security adviser, Michael Flynn, off the hook. But Trump said something else at that meeting that has received less attention, according to the Times:

Alone in the Oval Office, Mr. Trump began the discussion by condemning leaks to the news media, saying that Mr. Comey should consider putting reporters in prison for publishing classified information, according to one of Mr. Comey’s associates.

First of all, the FBI doesn't put people in prison. Trump seems confused about how the justice system works in general, so probably he didn't know that. One only hopes that he doesn't figure it out because when he does he'll realize that his most loyal collaborator, Attorney General Jeff Sessions, is the man to talk to about that. It's true that Sessions is busy at the moment ramping up the drug war and making life miserable for people of color, but he could probably find time to put a few journalists in jail if this would make the boss happy.

Trump's warm affinity for strongmen like Vladimir Putin of Russia, Rodrigo Duterte of the Philippines, Abdel Fattah el-Sisi of Egypt and Recep Tayyip Erdogan of Turkey is not a good omen in this regard. Every one of those rulers has jailed journalists or done worse to them for their being critical of their country's leadership. Obviously, the U.S. has not yet gone nearly as far as they have, but there are some alarming examples of press harassment since Trump took office.

Just last week a West Virginia journalist was arrested and jailed after following Health and Human Services Secretary Tom Price down a hallway, asking him about health care policy. On Thursday John Donnelly, a reporter for Roll Call, was manhandled and escorted out of a building by security guards for asking questions of the Federal Communications Commission's commissioners. (Ironically, Donnelly is chairman of the National Press Club’s Press Freedom Team.)

This is not normal. Neither is it normal for State Department officials to speak to reporters the way communications adviser R.C. Hammond spoke to CNN's White House correspondent, Michelle Kosinski, who reported this exchange on her Facebook page:

Monday night, as the story of the President giving classified information to the Russians was in full evolution, I get a call from . . .  RC Hammond, the State Department’s communications advisor, who had his facts wrong about what was reported and by whom.

But he kicked off the conversation with a venomously irate “What the hell are you doing??!!” Followed up with full-on DEMANDS — over and over, and over again — to tell him who my sources were. He kept pushing, as if he thought this was ample reason. Then, “Why won’t you tell me who they are?” he bellowed repeatedly, again demanding I at least tell him what jobs they held at State, or in what areas.

I had to explain to him that wasn’t how it worked.

The situation worsened from there.

Granted, the Trump administration is obviously under tremendous stress. But these three random incidents don't just reflect the Trump team. They also reflect an attitude on the part of law enforcement and security officials toward the media that is becoming increasingly hostile. People in authority are taking their cues from the president and that's disturbing.