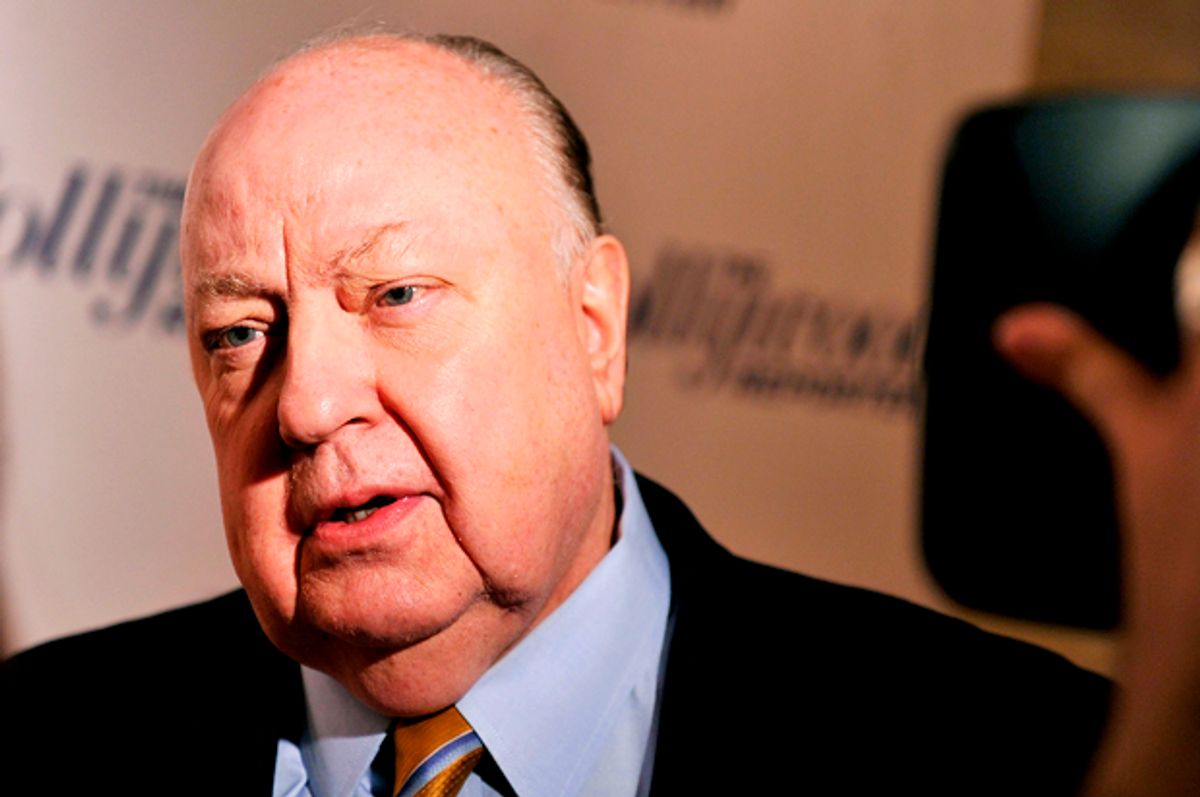 Roger Ailes, the founding chairman and longtime CEO of Fox News Channel, died early Thursday morning, according to a statement released by his wife, Elizabeth. He was 77.

As a hemophiliac, death was something that Ailes had prepared for his entire life, he told his semi-official biographer, Zev Chafets. As he got closer to the end, he began creating memory boxes for his son, Zac, who was born when Ailes was 60.

Ailes did much more than prepare for his own demise, however. As a television executive, his influence on the medium is probably without equal. Most people today know Ailes as the creator of Fox News but he was either directly or indirectly involved in the creation of four other channels: CNN, CNBC, MSNBC and Fox Business Network.

He began his career as a producer on "The Mike Douglas Show," a relic of the pre-network days of TV when local stations produced a lot more original programming. Ailes' fortunes improved rapidly as he quickly rose to become executive producer and the show itself began to be distributed in national syndication.

In that role, Ailes met Richard Nixon in the mid-1960s as the latter was plotting his political comeback. (Not only had Nixon lost the 1960 presidential election to John F. Kennedy; Nixon ran for governor of California in 1962 and lost that race, too. After that defeat he told reporters, "You won't have Dick Nixon to kick around anymore.") The young producer convinced Nixon to sign him on him as a media adviser.

Leveraging his experience in politics and TV production, Ailes soon founded his own public relations firm. His Nixon connections brought him to the attention of Joseph Coors, the beer magnate who had funded Barry Goldwater's 1964 crusade and also bankrolled many other conservative causes.

Although this is little known today, Coors’ venture, Television News Incorporated (or TVN), was a proto-Fox News operation that was also crucial to the creation of CNN. The premise behind the syndicated news distribution startup was exactly the same as that of Fox News a generation later: The national media is hopelessly skewed to the left and there's a large national audience hungry for more conservative fare.

In a move that presaged the misleading “fair and balanced” motto of Fox News Channel, Ailes pushed TVN to market itself as “The Independent News Service,” according to Gabriel Sherman’s Ailes biography, "The Loudest Voice in the Room."

Memos written by Ailes and other TVN executives urging that larger cultural stories be constructed foreshadowed Fox News’ hyping of a “War on Christmas” and its long-running obsession with the 2012 attack on the American consulate in Benghazi, Libya.

Despite the money showered on TVN by Coors, the venture was doomed from the start because of its constant ideological struggles. Even camera and lighting technicians were expected to adhere to the conservative perspectives held by whoever was currently ruling the operation.

Within less than two years, TVN collapsed on itself as expenses multiplied and revenues did not. Local station customers never materialized, largely due to the high cost of the satellite needed to receive TVN’s reports.

The concepts behind TVN did not die with it, however. Reese Schonfeld, TVN’s former vice president of operations, launched a separate company from the ashes and subsequently teamed up with Ted Turner to create CNN in 1980.

Ailes also saw the future in TVN but returned to the world of politics for several years, thanks in part to a Columbia Journalism Review article that revealed that he had used the fledgling news operation to promote clients of his PR firm without telling viewers or TVN’s stations. It was a practice that tarnished Ailes’ name in the world of journalism for years, but one that he frequently returned to when he returned to producing television news.

In the 1980s Ailes spent most of his time in political consulting. He worked with many top Republicans, including the GOP’s current Senate leader, Mitch McConnell of Kentucky. He was also instrumental in helping George H.W. Bush make a comeback in the 1988 Republican primaries by launching an attack against CBS News anchor Dan Rather.

Ailes was also the driving force behind Bush's campaign’s strategy to slam the eventual Democratic nominee, Massachusetts Gov. Michael Dukakis, as a godless liberal who was soft on crime. Though Ailes denied any involvement with the infamous TV ad that highlighted the case of furloughed murderer Willie Horton, the “independent” group that released it was staffed with his former protégés.

The 1988 election proved pivotal for Ailes and many of his baby boomer conservative contemporaries. By and large, every Republican presidential campaign since then has essentially been a variant of the plan devised by Ailes and Bush strategist Lee Atwater: Grind out a victory driven by superior turnout rather than convincing the masses.

Bush managed to win a 53 percent vote share that November. But since 1988, only one GOP presidential candidate — George W. Bush, running as a "war president" in 2004 — has won the popular-vote total.

Cultivating a highly motivated sliver of people is what Ailes did when he returned to television in 1992 as the executive producer of a syndicated talk show hosted by conservative radio host Rush Limbaugh.

From there Ailes moved on to become one of the first presidents of CNBC; he completely revamped the business new channel by bringing in former tabloid TV host Geraldo Rivera and pairing him with San Francisco Chronicle columnist Chris Matthews. At CNBC, Ailes also worked on launching America’s Talking, an infotainment channel that later grew into MSNBC (which subsequently refashioned itself as a sort of anti-Fox News).

Ailes didn’t last long at NBC, however. His frequent bullying of colleagues caught up with him when one of them accused Ailes of calling him an anti-Semitic slur. The corporate overlords were also displeased when Ailes began openly campaigning to become the next CEO of NBC.

Forced out with a cloud over his head once again, Ailes was saved from obscurity by Rupert Murdoch, the Australian-American media baron who had recently launched the Fox broadcast network, a feat most industry observers had thought would be impossible. Fresh from that success, Murdoch asked Ailes to build for him a cable news network that would cater to the right-leaning market that Ailes had long sought to serve.

Ailes was already 56 years old when Fox News Channel launched in 1996, but in the ensuing decades it became obvious that it was his life’s calling. He built the channel in his own image, with a weird combination of “60 Minutes,” “The Old Time Gospel Hour,” “Sesame Street” and “Girls Gone Wild.”

He enforced a rigid ideological hierarchy within the channel. Unlike TVN, liberals and leftists were allowed in the building — but only if they knew their places as producers or as on-camera ideological punching bags and caricatures.

Moderate Republicans, overtly secular right-wingers and conservatives who opposed an aggressive American foreign policy were never allowed in the door.

Ailes and Salon briefly intersected in 2000, shortly after the channel’s launch. Salon's founding editor, David Talbot, and several other colleagues set up a meeting on a lark to test out how sincere Fox News was about its “fair and balanced” slogan.

According to Talbot, Ailes originally declined to appear at the forum but showed up at the last minute to essentially gloat about how his shows were dominating the ratings. Yet he also seemed eager to claim that he could get along with Democrats if he wanted to.

As proof of his political tolerance, Talbot said, Ailes boasted of his friendship with the Rev. Jesse Jackson, the left-wing activist who was facing marital difficulties after being exposed as having cheated on his wife. The thought of this seemed to put Ailes in a jovial mood, which he showed by lapsing into his impression of a Southern black dialect in order to mock Jackson.

As Talbot told the story in a phone interview, Ailes said, “Dat’s what you gets when you shtup the help!” — bizarrely using a Yiddish word for sexual intercourse in his overtly racist Jackson impression.

Of course, shtupping the help is exactly what Ailes himself had allegedly been trying to do ever since his days at "The Mike Douglas Show." Ultimately, his behavior toward women is what led to his ouster from Fox News. The fallout from Ailes’ decades of purported sexual harassment and even blackmail of female staffers persists to this day.

Employees at the Fox News network and its parent company, 21st Century, Fox are still figuring out the concentric circles of skulduggery that Ailes had erected on the company dime to conceal his activities and defend top talent like Bill O’Reilly who were also allegedly harassing female employees.

There’s no question that Ailes’ television legacy is immense, given his direct or indirect involvement in five cable news channels. But his political impact was likely even greater. A man who is addicted to watching Fox News is currently the president of the United States.

Ailes' brand of belligerent public Christianity and private corruption survives him in the scores of “scam PACs” that allegedly fleece right-wing grandmothers out of their Social Security checks with promises of turning America back to Christ, "true conservatism" or whatever else.

In both politics and television, however, the durability of Ailes’ way of doing things remains in doubt. While Donald Trump reflects the same vulgar inferiority complex that Ailes had, the political forces that the former game show host unleashed during his haphazard presidential campaign are drastically different from the brand of politics that Ailes espoused.

Contrary to what Ailes believed all his life, conservative voters were not interested in slashing the government and going to war in the Middle East — and their sentiments Trump capitalized on. In a way, this was the inevitable progression of the right-wing ethos that Ailes created, where a pugnacious attitude mattered more than tangible accomplishment and entertainment was more important than intelligence.

Since Ailes' forced exit, it is not surprising that formerly loyal Fox News viewers have been drifting away, even as their political party of choice has lost all semblance of a coherent ideology. Both Fox News and the conservative establishment are continuing to follow their prior paths, but there is a palpable sense that neither entity will long exist in its present form.

The politics that Roger Ailes created may not outlive him by much.

Just what the post-Ailes right will resemble is one of the the most significant political and cultural stories of our time.

Will it head toward the middle-road competence of Dwight Eisenhower or toward the overt racism and authoritarianism of the neofascist alt-right? Don't expect to hear that topic debated on Fox News anytime soon.