Roger Ailes' true legacy: His misbegotten swamp child is in the White House 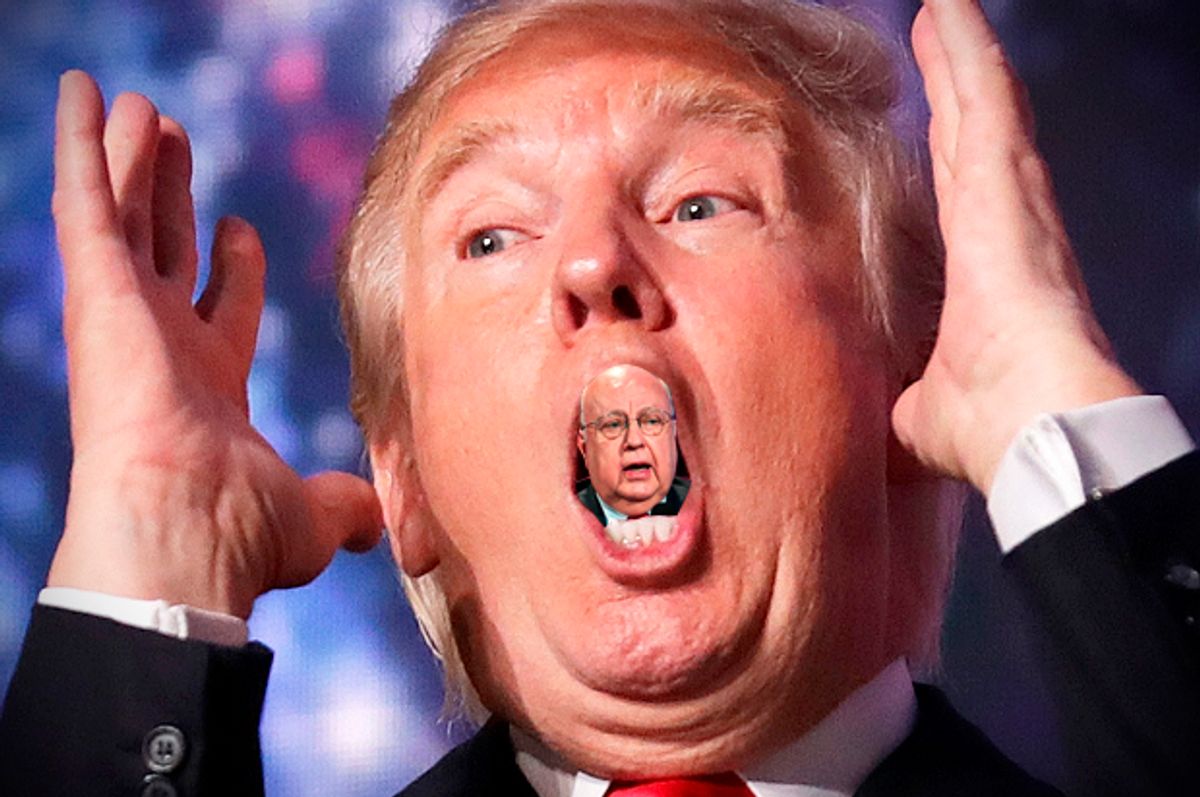 Just as news broke on Thursday morning that former Fox News chief Roger Ailes had died, the natural endpoint of his life’s work was on Twitter, airing out his persecution complex as usual.

“This is the single greatest witch hunt of a politician in American history!” Donald Trump tweeted with his customary hyperbole, a little before 8 a.m. A few minutes later, he wondered why “With all of the illegal acts that took place in the Clinton campaign & Obama Administration, there was never a special counsel appointed!”

Somewhere, hopefully suspended headfirst over a vat of bubbling lava as pitchfork-wielding demons shrieked and danced around him, Roger Ailes must have smiled.

Ailes’ career is bookended by the role he played in electing of the two most criminal presidents of the modern era. In 1968 as a young up-and-comer, he wormed his way into a role serving as a media adviser for Richard Nixon’s winning campaign. In 2016 the groundwork laid by Fox News over the 20 years of Ailes' tenure became fertile soil for the grievance politics of Donald Trump to take root and propel him to the White House. It is no small irony that Ailes, having been forced out of his job just before the 2016 election, would die at the moment that Trump's presidency is proving just how deeply intractable is the gap between reality and the world that Fox News made.

Roger Ailes was called a genius in his lifetime. But it was not a genius move to take the racism and cultural revanchism that was already floating around on the right and give it a home on cable TV. Ailes simply found angry people (or at least angry-sounding people) he could plop in front of a camera to vocalize the rage coursing through the veins of a widely dispersed electorate. The conservative world already had a network of think tanks and mail-order houses that had been preying on that anger for decades. Ailes just put it on television so it could be disseminated more efficiently.

By 2016 the issue for American politics was not so much that Ailes had built Fox News into the top-rated cable news channel. It was that he had built an entire alternate world. Any Republican politician who wanted to win a presidential election or gain national exposure had to adopt the outlook of this world if he or she had any hope of earning the votes of the party's base.

The GOP presidential candidates of the last couple of election cycles had been trending towards the Fox view. So in 2016 the time was right for a shambolic golem, built out of the spare parts of a hundred different pseudo-scandals and conspiracies and animated by rage at the establishment Republicans who did nothing to stop the feckless Democratic perpetrators of these America-destroying schemes.

Trump is nothing if not our first Fox News president. He has been a favorite guest of the network’s news shows for years and found some of his biggest cheerleaders during his campaign among its hosts. During all that time, he adapted to the Fox News view of the world whereby Hillary Clinton is a monstrous criminal who callously allowed four of her countrymen to die in Benghazi, Libya; Barack Obama is a Kenyan-born Muslim and socialist who secretly hates America; and Democrats in general will happily screw over good, hardworking (white) Americans while bowing and scraping before La Raza and Black Lives Matter. In fact, in every way Trump adapted to it much, much better than anyone else. His decades in the limelight as a personality famous for, well, for being famous no doubt gave him an edge.

Trump is a vessel into which Fox News poured two decades of racism, paranoia, cultural anxiety and white grievance. Then it cheered Trump on as he ran it all through the blender that is his brain and spat it back out at Fox News’ audience, riding all that anger right into the Oval Office.

The reality-show star who demands that reality bend to his own vision of it met the network head who already had developed the framework for doing so. It was almost too perfect.

Unfortunately for Trump, he has run headlong into the real world during his first months in office. Fox News has done its best to keep cheerleading for him, in the process almost turning itself into a parody of a government-run network in a dystopian YA novel. But the channel has also been rocked by the sexual harassment scandal that led to Ailes’ departure last summer. Its ratings are down, perhaps in part because its audience is being introduced to reality right along with the president it elected.

Having birthed this monstrosity and nurtured it for two decades, Roger Ailes won’t be here to guide it through whatever is coming with the Trump presidency. But its long-term toxic effect on American politics will be his impoverished legacy.