When some US firms move production overseas, they also offshore their pollution 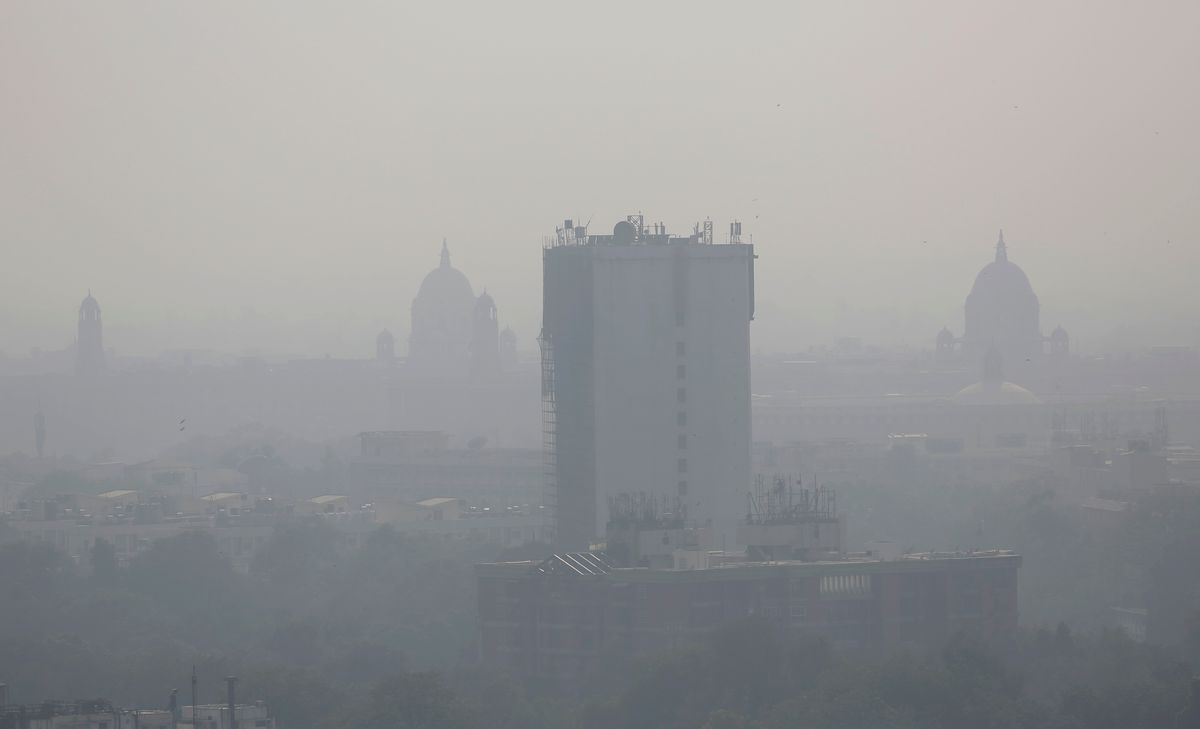 In this photo taken Friday, Oct. 28, 2016, a layer of smog envelops the city skyline before Diwali festival in New Delhi, India. As north Indian cities enter the season of high air pollution, a new report is warning about the dangers to children. (AP Photo/Altaf Qadri) (AP)
--

On April 22, as protesters swelled Earth Day rallies in U.S. cities and around the world, President Trump tweeted that he was “committed to keeping our air and water clean but always remember that economic growth enhances environmental protection. Jobs matter!” His message was eerily similar to assertions by governments in developing countries that environmental standards are less important than attracting jobs.

Indeed, over the last few decades many developing countries have adopted loose environmental standards to lure foreign firms to move production there. However, an emerging body of research shows that policies like this also bring heavy pollution to the host countries.

In a recent study, my co-author Xiaoyang Li and I found that a significant number of U.S. firms reduce their pollution at home by offshoring production to poor and less regulated countries. The greening of U.S. manufacturing over the past several decades may be partially caused by a growing flow of “brown” imports from poor countries.

A “jobs-first” policy can add to serious environmental challenges in the host country. For example, one recent study calculates that 17 to 36 percent of four major air pollutants emitted in China come from production for export. Among these export-related emissions, about 21 percent come from the production of goods for the United States.

Studies like this suggest that trade can potentially redistribute environmental footprints. This can happen via two pathways. One is for “dirty” firms in rich countries to stay out of the entire value chain that contains the polluting activities. In this case, some rich country customers will stop consuming the “dirty” products, which is good for the global environment. Others will keep consuming “dirty” products imported from poor and less regulated countries.

Unfortunately, existing studies have not been able to tease apart these two pathways. To find out if some U.S. companies were taking the second route, we obtained data from the U.S. Census Bureau and the Environmental Protection Agency about trade, production and pollution for more than 8,000 U.S. firms with 18,000 U.S. plants.

We first found that of all goods imported by U.S. manufacturing firms (not wholesaler or retailers), the share produced in low-wage countries rose from 7 percent in 1992 to 23 percent in 2009. At the same time, toxic air emissions from manufacturing industries in the United States fell by more than half. Industries that experienced the greatest increase in imports from low-wage countries include printing, apparel and textile, furniture, and rubber and plastics. These industries also experienced some of the largest drops in air pollution in the United States.

Second, using this unprecedentedly detailed data, we obtained some interesting findings at the firm and plant level. We found that as U.S. firms imported more goods from low-wage countries, their plants released fewer toxic emissions on American soil. In addition, their U.S. plants shifted production to less-polluting industries, produced less waste, and spent less on pollution abatement. In sum, these firms were improving their own environmental performance by shifting to less-polluting segment of the value chain domestically and moving more-polluting activities overseas.

To our relief, we found that not all U.S. firms chose to offshore their pollution. In particular, firms that are more productive and invest more in R&D and brand equity offshore less pollution. These firms may find it less costly to renovate production technology domestically to comply with stringent environmental standards. They may also find it more rewarding to do so because consumers become more loyal to their brand for their socially responsible behavior at home.

U.S. companies that offshore pollution are not violating environmental laws either at home or in their host countries. Indeed, rebalancing their global production is a logical response to higher environmental compliance costs in the United States.

However, to the extent that U.S. firms can choose either to purchase cheap and “dirty-to-make” goods from low-wage countries or to produce them under stringent environmental standards at home, they are making a strategic decision about the private costs of production compared to the public (and international) costs of pollution. Companies that offshore pollution to less-regulated countries are taking advantage of those nations’ lower environmental and labor standards and letting the host countries bear the associated social costs.

Unfortunately, it is not always easy to induce companies to adopt higher standards for their operations in developing countries. After Nike was first reported to have unsafe and abusive working conditions at its foreign plants, it took the company almost a decade to announce that it would raise wages, increase monitoring and adopt more stringent air quality standards in its factories overseas.

Similarly, Foxconn – a key supplier to Apple – has incurred heavy criticism over its labor practices in China. The company reportedly has improved its working conditions there, but it has also diversified into other low-wage nations where regulations are more lax, including Malaysia, Mexico, Brazil, Vietnam and Indonesia.

In a global market where companies compete fiercely across national boundaries, governments should coordinate closely to maintain a regulatory framework that incentivizes firms to undertake more socially responsible actions. Participating in trade agreements with strong environmental requirements, and in global coalitions such as those proposed at the United Nations Climate Change Conferences, is one way to coordinate. Unfortunately, some of the world’s largest economies seem to be stepping in the opposite direction.

Jobs are important for both developed and developing countries. In the face of globalization, however, national leaders should focus more on jobs that are sustainable and do not come at the expense of the environment.