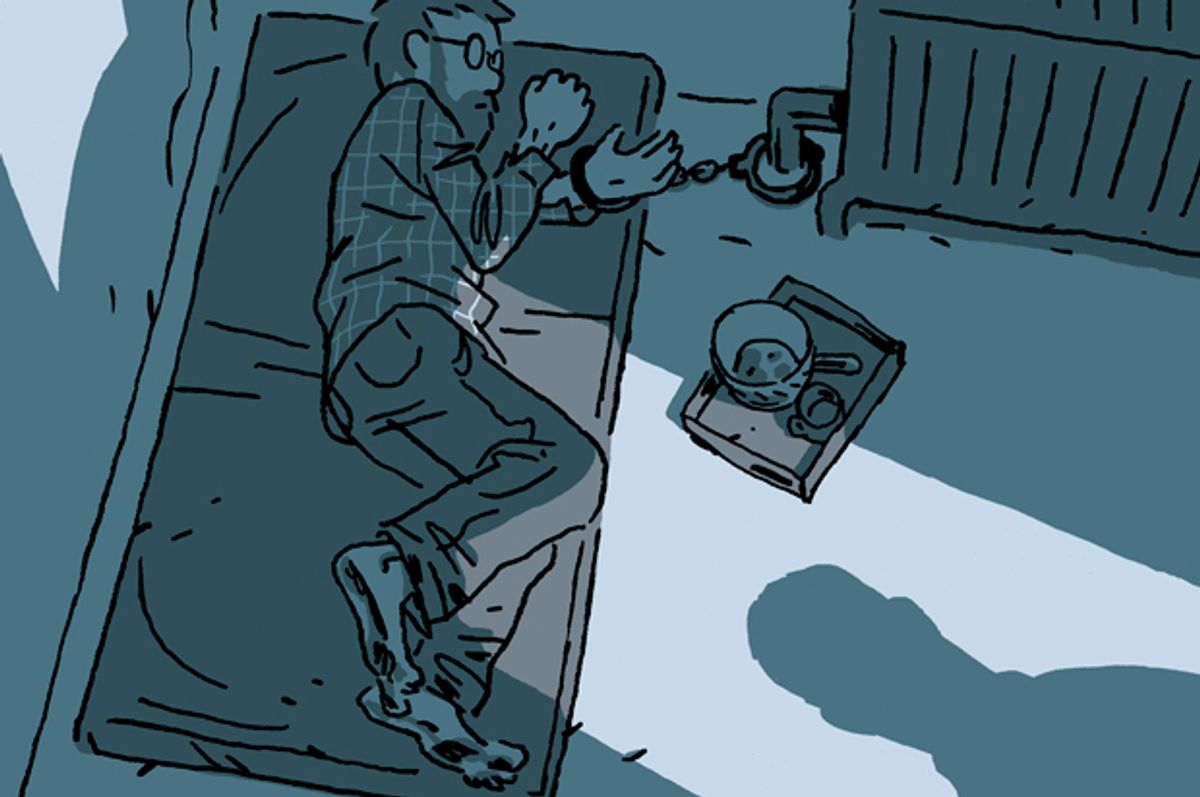 Comic books about superheroes get most of the attention these days. The tights-and-flights crowd dominates pop-culture and the box office. While there’s plenty of inspiration to be taken from the mythical, stylized adventures of Captain America and Wonder Woman, the genre of nonfiction comics offers a view of heroism that’s far more real.

“Hostage” is the story of Christophe André, who was working as an administrator for Doctors Without Borders in Ingushita, a tiny Russian republic, in 1997.  André was abducted in the middle of the night by a group of armed men and taken to Chechnya for an unknown purpose. Their hostage for about three months, André lived on thin soup and thinner knowledge of his captors or prospects for release. As to how he survived the monotonous, maddening, terrifying experience . . . well, no spoilers.

To create what might be the most claustrophobic comic of all time, Delisle used hours of conversations conducted with André over the the course of 15 years. Delisle keeps his focus on his subject, showing only what he sees, hears, feels and thinks. With no translation of the curt Chechen André’s captors speak, the reader is rendered just as confused, frustrated and isolated as the hostage.

The daily routine of André varies only slightly through the graphic novel, taking on the tight dimension of a Steve Reich composition or a Samuel Beckett play. The persistent, numbing, percussive details give readers a glimpse of André’s horror and fragile state of mind. The major events of his days were getting a little food and using a bucket to go to the bathroom. If things were really going well, he might be offered a cigarette.

One of the most heartbreaking moments in "Hostage" centers around André stealing, and then savoring, a single stolen garlic clove. Delisle’s art gives this small, furtive act the drama and emotion it deserves.

Comic books are going through a revolution in coloring these days, as Jordie Bellaire, Matt Hollingsworth, Matt Wilson, Laura Allred and others are exploding the potential of this essential facet of comics. But Delisle shows that a simple approach can be just as effective. His minimalistic, limited palette of grays and blues matches the subject matter perfectly, mirroring the limitations of André’s life in captivity. Paradoxically, these unrealistic colors make André’s predicament feel more real.

Delisle is known for his series of intense first-person graphic novels including “Pyongyang: A Journey in North Korea,” “Burma Chronicles” and “Jerusalem.” Moving from autobiography to biography in “Hostage” required a unique process Delisle described to Paste: “Well, most of the book is in a room with nothing, so that’s pretty easy to draw. For the rest, I took pictures of myself attached to a radiator in my studio. I have a pair of handcuffs as well that I bought, knowing that it would be something I would draw for 400 pages. A friend took a bunch of pictures of me half-naked on the bed or on the floor, which looked really weird at the time, but it was very helpful because my drawing was a bit more realistic than what I do usually. It was a good reference.” By putting himself in André’s position so literally, Delisle might be the world’s first method cartoonist.

Despite the straightforwardness of the story, “Hostage” is all about interpretation. André spends much of the the novel devising theories — guesswork, really — based on the very limited knowledge of what's happening in the rest of the house he's imprisoned in. Is the fact that his captors took his picture a good sign? Is a banging sound from a fight or just a child playing with a ball? How long is he going to be trapped here, anyway? What's going on in the rest of the world? Is his sister still getting married as scheduled? The existential uncertainty and relentless isolation make "Hostage" a nonfiction horror.

But “Hostage” is also about courage. André knows his terrible situation will be even worse if he totally despairs or loses his sanity, so he tries to keep his mind active. Well-read in war history, André replays favorite moments, such as Napoleon’s German campaign, for himself. He devises an alphabet game, naming famous battles and military leaders. The dialogue — which Delisle ran by André during the lengthy process of making this book — captures a plainspoken but relentless will to live. After a captor brings a new shirt, André says, “My mind refuses to take this as anything but a sign.” It's both declaration and observation.

In a remarkable mainstream comic from a few years ago, writer (and former CIA operative) Tom King and artist Barneby Bagenda reinvented DC’s Omega Men through the lens of contemporary terrorism. Along the way, Green Lantern Kyle Rayner (a character who is also a comic-book artist) makes some observations about comics that would apply well to "Hostage": ". . . to separate the panels, you draw these lines, gutters they’re called. You can kind of make a grid out of them. It’s weird. I’d stare at them, the grids, they looked like something . . . familiar. Took me a while to see it, I mean. All those hanging crosses. It’s a cage, right? They’re just bars on a cage. The story, the adventure, is locked behind them — separated from us. As if it’s something savage. As if we’re something civilized.” The gutters of a comic have never felt more like those prison bars than they do in “Hostage.” Still, Delisle’s humane approach keeps this from become a trip to the zoo; he makes you not just see, but feel André’s anguish.

In a work of uncommon psychological depth and compassion, Delisle also motions toward a broader point stated in the not-so-eloquent Newsweek headline, “Solitary Confinement Screws Up the Brains of Prisoners.” With its close-up look at one person’s horror behind bars, perhaps "Hostage" might make some of us realize how our own penal system abuses its prisoners, captives unlikely to be immortalized by a cartoonist or anyone else.