Let the wild romp-us begin! What have men in suits done for us lately?

I, for one, welcome our new adult-baby overlords. Take the man-romper as a sign of optimism for a brighter future 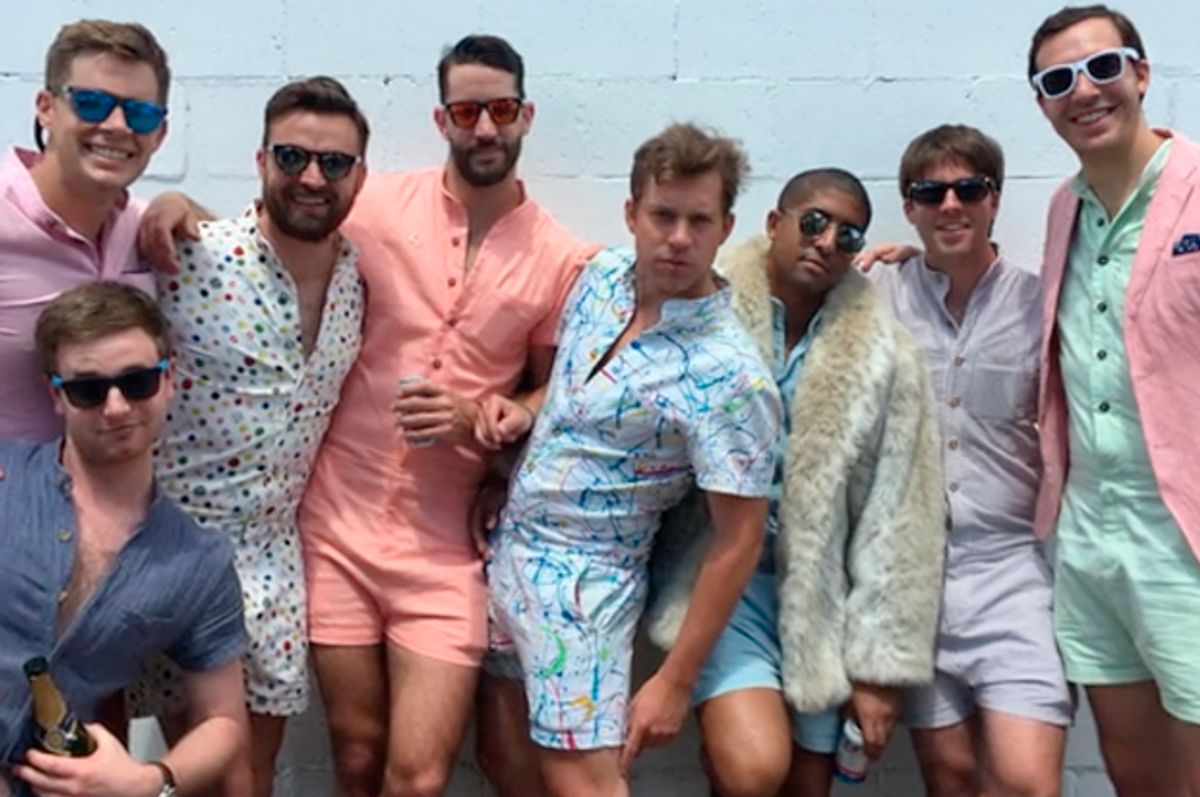 A couple of mornings ago, I woke in a panic. My dreams have been hyper-realistic verging on the hysterical lately, and I had just spent a cycle living out the beginning days of a "Handmaid's Tale" violent transition to full reproductive martial law. This kind of thing happens when, after a long day of working through a logic-defying, emotionally abusive news cycle, one binges misogynist-dystopia prestige drama to unwind. My first thought was thank god I still live in America, not Gilead. Then I remembered I should check Twitter to confirm; Dear Leader is up and all thumbs while the rest of us dream fitfully of our own subjugation.

My third thought? Screw it; bring on the man-rompers.

You are reading this on the internet so you have heard of the RompHim, aka the man-romper, aka the bromper, aka the piece of clothing that launched a thousand memes this week when a Kickstarter campaign zoomed past its modest $10,000 goal in a day and now has surpassed it many times over. (Kickstarter — still a thing!) It’s a one-piece, lightweight cotton, shorts-and-button-down-shirt outfit designed for men, and the internet took a break from fighting over the future of democracy to scrap over whether it is awesome or disgusting.

Where does a man wear such a piece of clothing? According to the company’s Instagram — and I can confirm that this is a setting where a pastel cotton shortie jumpsuit would garner little more than a nod of respect — he wears it to the Kentucky Derby.

My feelings on the man-romper align with my feelings on the lady-romper, aka the playsuit, aka why not just call it a onesie already: These are not outfits for grownups. They are adult-sized baby clothes. You do not dress like this when you are of voting age, grumbled the woman whose cohort wears a soothing blanket known as a “hoodie” to the office.

But then I woke up after a nightmare of slow-running from government agents chasing me through the dying mall I worked in and realized that the signifier of the adult suit died when Barack Obama wore one on his way out of the White House. The dude who walked in after him is hardly ever seen without one — however bizarrely tailored — and he’s basically a giant preschooler pinching the wings off bugs while daring the babysitter to do something about it, except the bugs are democracy and the babysitter is Congress or David Brooks, I can’t decide. So what does a tie even mean anymore?

People who are repulsed by the man-romper but love it when men dress like Don Draper just might have it backwards. It's not only ridiculous that a traditional man’s suit still telegraphs moral authority in our culture, it's distasteful. We should be able to agree that there’s no inherent decency signified by a jacket buttoned according to conventions set by the king of a colonial empire.

You know who always looks the perfect image of the proper male adult? Mike Pence.

It's worth pointing out, too, that Betsy DeVos wants to gut funding for public education and public-service college loan forgiveness and she has a grown-up outfit for every occasion.

I don't think we'll get to the point soon where we're throwing over our KonMari'd capsule wardrobes for a week's worth of gender-neutral Devo jumpsuits, but as Meryl Streep once reminded us, if you think fashion has nothing to do with you, you’re deluded. What we wear is as much of a reflection of the culture we live in and are hoping to shape as the music we listen to, the books we read and the misogynist-dystopia prestige streaming dramas we binge. We are seeing the cultural endgame of a national toxic masculinity fetish unfold in front of our very eyes on Twitter every day at 3 a.m. We should not be surprised when fashion adapts, however quietly, to resist it. As George Michael once hoped you'd understand, sometimes the clothes do not make the man.

Baby boomers supported policies that have doomed many of their adult children to have a harder time becoming financially independent, getting married even if they want to and building families, and securing gainful full-time employment with the benefits they’re going to need once the GOP finishes gutting their health insurance. The RompHim could not be more tailor-made for millennials to give their parents’ generation — and therefore, the White House — a sartorial middle finger with every selfie. The RompHim is even made in the United States — bringing back those manufacturing jobs! — which is more than Ivanka Trump can say for her stuff.

Rise up, romper revolution! Poll data released last month by Accel and Qualtrics found that 91 percent of millennials believe that basic health care is a right. Eighty-six percent say a living wage is a right, too. I want to live in their America, onesies and all. Let them guide us into this new era where the "power suit = suitable for power" equivalence is vanquished once and for all.  I for one fear not our new adult-baby overlords. This moist Chuck E. Cheese ball pit of a country is their inheritance, and it's going to need all the help it can get.