The most serious crime in Washington, D.C.

Trump has shaken the capital's social elite to it's core. This is his most dangerous game 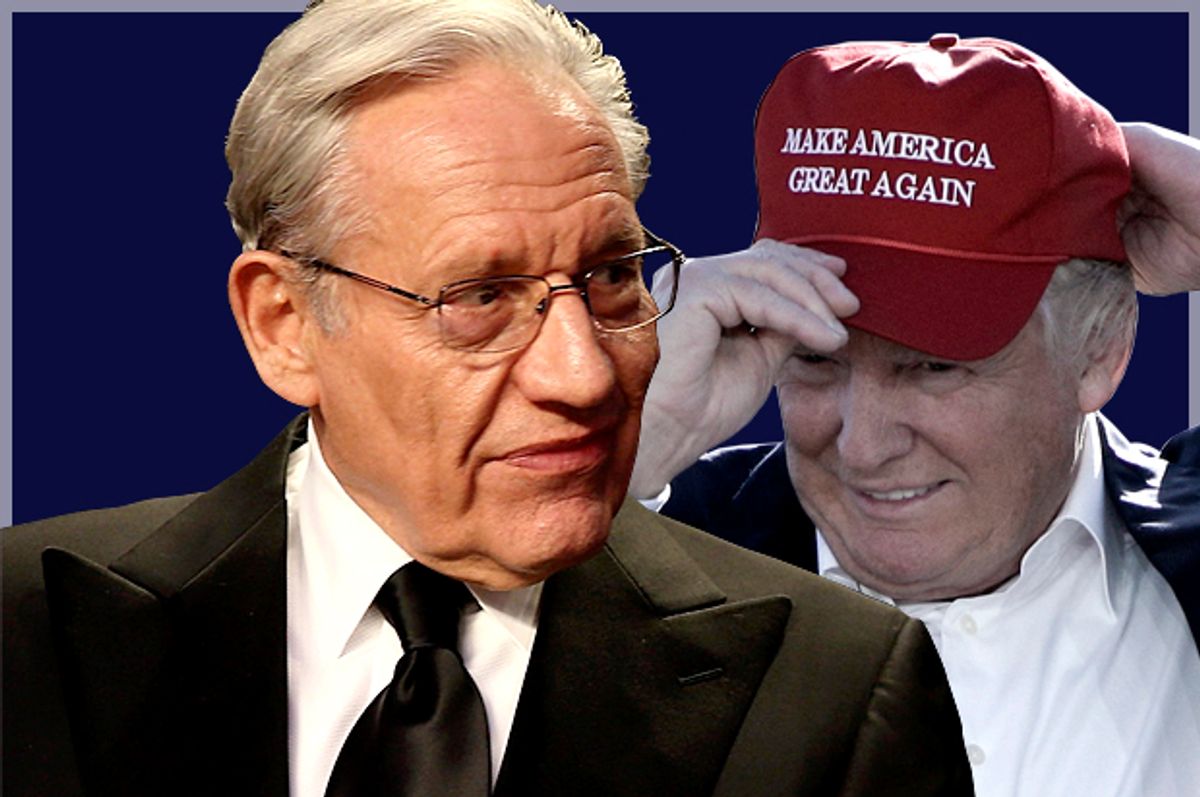 Watergate veteran Bob Woodward has been in Washington a long time. It actually makes me feel old to realize it was 45 years ago that he and Carl Bernstein, at the time two cub reporters at the Washington Post, were biding their time one night when a call came over the police scanner that there had been a break-in at the Watergate office complex down by the Potomac. You know the rest of the story — they brought down a president, wrote a couple of books together, Carl went off to New York and Bob bought a spacious house in Georgetown. If you look up the word “establishment” in the dictionary at the Library of Congress today, you’ll find Bob’s picture there. The word “august” comes to mind, and I don’t mean the month after July. In Washington, D.C. terms, Bob Woodward is a very Serious Man. Think tanks know his whereabouts on a hour-to-hour basis. Every cable news booker in town has his email address bookmarked in case there’s a major event. Washington hostesses have him on speed dial and jockey for position trying to get him to their dinner tables. The only thing Bob’s missing at this point is one of those bronze roadside markers at the end of the Key Bridge reading “Georgetown: Home of Bob Woodward.”

The “Morning Joe” show sends a big black car over to Bob’s place in Georgetown when there are Major Events that need commenting on, and Friday was one of those days. It had been a very, very busy week: Monday, North Korea test launched a new missile. Tuesday it was revealed that Trump shared “highly classified” information with the Russian foreign minister only a day after he fired FBI Director James Comey over his investigation into Russian governmental ties to the Trump campaign. Wednesday, The New York Times revealed that Trump had asked Comey to end his investigation into former National Security Adviser Michael Flynn, and then later the same day, Robert Mueller was appointed Special Counsel to investigate Trump’s Russia ties . . . including Flynn! And to top it off, Fox News strongman Roger Ailes died. What do you do after a head-spinning week like that? Call Bob.

So Bob shows up on Morning Joe, and he’s in a swivet. On the agenda: Trump. "He's giving all of us gas pains," intoned Woodward, sounding, as ever, like he's running for student council presence at his junior high back in Chicago. "He's giving the whole world gas pains. But the fatal problem is . . . at least it could be fatal . . . is the chaos." The Grand Old Man of Georgetown has seen presidents come and go, and he knows The Way Things Should Work. "All administrations come into office not knowing things," explained Bob. But the various White Houses he's covered get together, "and they make a plan, but these guys can't plan the next five minutes. It's chaos.” Willie Geist chimed in from New York, agreeing with Bob: "He's an ad lib guy, and we have an ad lib presidency."

Man was I glad I got up at 5:30 in the morning and tuned in to “Morning Joe,” because if I hadn't, I would have missed out learning what the problem has been with Trump. For Bob Woodward, the problem with Trump is that he hasn't been able to organize his White House. There is chaos in Washington, and my goodness! We can't have chaos in Washington, because we might have to skip a cocktail party in order to cover some chaos breaking at 7:00pm just as the white-jacket waiters are starting to pass around the canapes.

Woodward was upset. Very upset. Bob Woodward doesn’t do angry, but if he did, he would have looked angry. Instead, he looked like he had invited his Very Best Friends over for drinks on Wednesday and only a few of them showed up, because the rest were in the green rooms across town getting ready to comment on their good friend Bob Mueller. You know, the other Bob next to the word “establishment” in the dictionary: St. Paul’s School, Princeton, UVA Law, a career so distinguished they’re adding “Bob Mueller” to the OED definition of the word.

No, the problem with Trump is the chaos. Having a madman in the White House is first and foremost a bother, you see. Bob Woodward and his Serious Friends in Georgetown are supposed to be cozying up to buddies of theirs who have secured Important Positions in the White House so they can get the Inside Scoop and dazzle the hostesses who invite them over for dinner. They’re supposed to be padding around their well-trimmed Georgetown backyards in their Guccis with gin and tonics in hand. They're not supposed to be suffering this . . . this . . . chaos!

If you’re looking to see which way the wind is blowing in Washington, you can’t find a better weather vane than Bob Woodward. And the forecast for Trump is not good. Guys like Michael Gerson and David Gergen and Jonathan Turley and the rest of the mandarins on the Potomac are very, very upset, just like their friend Bob. Washington, D.C. is their town, and it’s just not supposed to be like this. They’re supposed to be checking their calendars and making sure they’ve left open the night of the Kennedy Center Honors, because last year they honored James Taylor and the Eagles and the year before that, Carole King was honored, and Aretha Franklin sang “Natural Woman!”

This is the kind of stuff you work for your whole life! You go to literally hundreds of horrible, interminable meetings, and you endure hundreds of boring speeches, and you stand around smiling and shaking hands with hundreds of redneck congressmen and senators you can’t stand, and you endure thousands of hours in Washington’s truly hideous traffic, all so you can rub shoulders with Sir Paul McCartney and Bob Dylan and Al Pacino . . . I mean, who wouldn’t pay those kinds of dues? But . . . who is Trump going to honor? Lee Greenwood? What are they going to see? Kid Rock singing “I’m Proud to be an American?” Obama honored television legend Oprah Winfrey. Is Trump going to celebrate Bill O’Reilly?

They won’t be appointing any Special Counsel to investigate him for this one, but there is one crime in Washington, D.C. for which no punishment would be too severe: not being a Serious Person. Trump has already been found guilty.