Trotsky explains Donald Trump to you: Our idiot president is a "substitute" who represents America's mass ignorance and bottomless narcissism

How Trump's ludicrous rise mirrors the process that brought Stalin to power — and, mercifully, how it doesn't 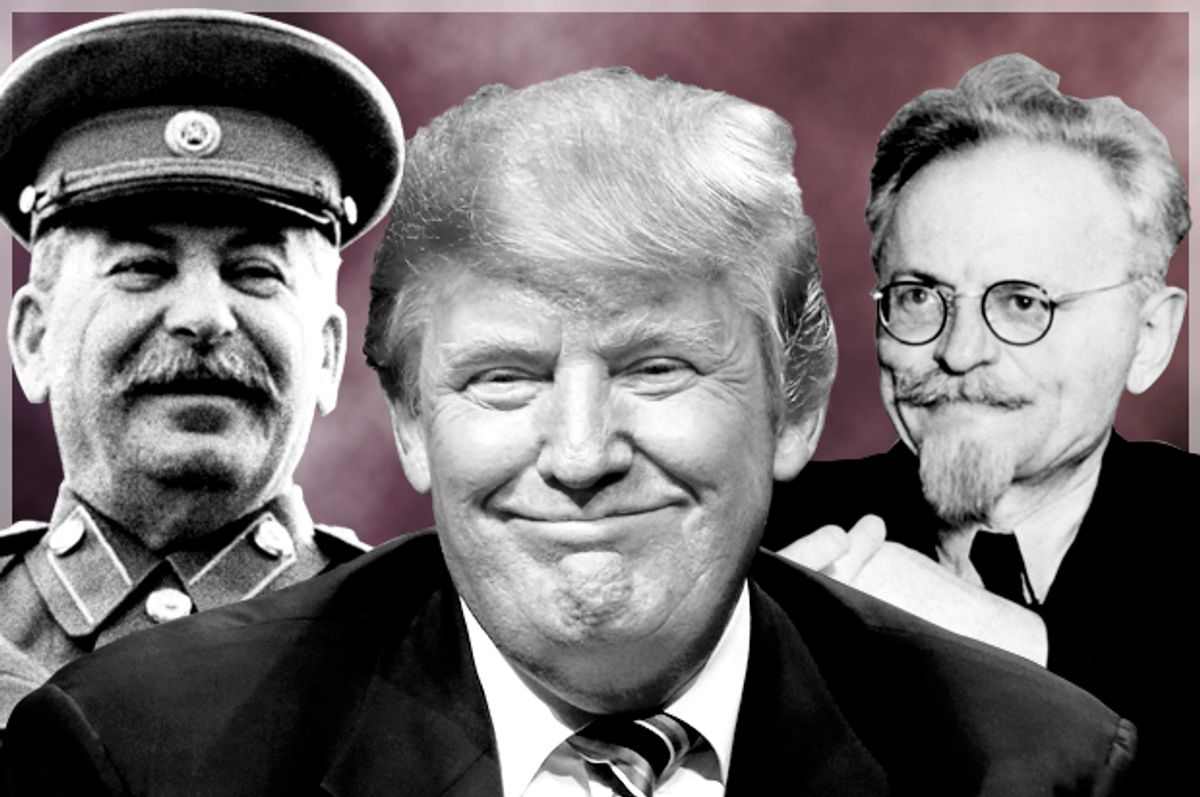 There’s a useful concept in understanding how societies deteriorate into dictatorship that was most famously developed by Leon Trotsky, although it reaches a lot further back in history. This notion of “substitutionism” — I promise the idea is sexier than the name — might help us understand the current occupant of the White House a little better, if only in a negative sense. If Donald Trump presents himself, as he does in every public speech, as a representative or “substitute” for some large group of voiceless and powerless people, then what group is being represented and how did this substitution occur?

Whatever you make of Trotsky’s role as a leader of the Russian Revolution — and his level of responsibility for what became of it in later years — he deserves more recognition than he gets as one of the 20th century’s shrewdest observers of politics, as well as a first-rate journalist who never allowed his personal ideology to dictate his perceptions. I would love to teleport him forward in time and give him an MSNBC show: “Breaking Eggs with Leon Trotsky,” on which he converses jovially with Republican legislators and think-tank neocons — displaying his superior knowledge of French brandy and art history — before promising to fertilize the fields of the future with their bleached bones.

Substitutionism, as understood and refined by Trotsky (he may have coined the term, but didn’t invent the idea), works like this: In a large, sprawling nation where the political situation is murky and chaotic and the mass of the population is sunk in apathy and ignorance, small groups of educated people in the metropolitan centers nominate themselves to speak for the whole. Trotsky was thinking of the Russian Empire at the turn of the last century, where well-meaning intellectuals in St. Petersburg and Moscow often claimed to represent the interests of the millions upon millions of illiterate, superstitious peasants spread out across the vast heartland. Just spitballing here, but I’m thinking we could come up with more recent examples that are at least somewhat analogous.

Trotsky and his fellow Bolshevik revolutionaries ruthlessly mocked the pretentious, French-speaking twits who thought they knew what was best for some family of nine who literally slept with pigs in a hut 2,000 miles away, had never seen a book that wasn’t the local priest’s illustrated Bible and weren’t quite sure whether the Tsar was a human or divine being. But as Trotsky himself soon came to appreciate, the Russian tradition of substitutionism played out on a grand and ironic scale during and after the revolution he helped make.

Some of this is well understood in retrospect, although all of it remains controversial. The Bolsheviks under Lenin and Trotsky — who were in fact just one faction of the Russian Social Democratic Labor Party, after a bitter ideological split — shocked the world by staging a successful revolution in the name of the industrial working class, a social entity that can barely be said to have existed in the Russia of 1917. Some Bolsheviks certainly came from the working class (although neither of those guys did), but historians are never likely to agree about how much of the Russian proletariat actually supported the October Revolution, or how enthusiastically or for how long.

So a minority political movement — a “vanguard party,” to use Leninist terminology — seized power in the name of a minority social class, because that class was perceived as the protagonist of history that would bring an end to all oppression and suffering, etc. Without getting lured into endless debate about the moral dimensions of the Russian Revolution and when exactly it began to go south — that way lies madness! — I think it’s fair to say that Lenin and Trotsky did not intend or envision a despotic one-party state that would crush all forms of opposition and endure for decades as a regime of lies, brutality and murder.

Whether that nightmarish outcome was the inevitable consequence of the Bolsheviks’ initial substitutions — substituting the industrial working class that only half-existed for a vast nation that largely had no idea what was happening, and then substituting a few thousand committed revolutionaries for that class — is an enormous historical unanswerable. It’s not as if the leaders of the October Revolution were unaware of this paradox, or the dangers it presented. In fact it was Trotsky who famously laid out almost exactly what would happen, in an essay written 13 years before the revolution — not as an attack on his future nemesis, Joseph Stalin, but an attack on Lenin’s conception of a centralized, disciplined party bureaucracy:

It took Stalin the better part of a decade after Lenin’s death to consolidate his power through this gradual process of substitution, which went much further than Trotsky had imagined possible in 1904. At least in theory, the Bolsheviks were OK with open political debate both inside and outside the party, although they certainly reserved the right to crack down on “counterrevolutionary” activity when the workers’ state confronted a state of emergency — a state which, like our own War on Terror, effectively never ended. Even Lenin never suggested that the Communist Party and the Soviet state should be the same thing, and he repeatedly made clear that the bureaucracy could not be trusted to act in the interests of the working class just because it said it was doing so.

As Trotsky would document exhaustively during his years in exile after 1930, Stalin shrewdly took advantage of the flaws baked into the revolutionary regime from the outset — as well as the ingrained stubbornness and backwardness of the Russian nation — and piece by piece replaced the whole thing with himself. If the working class stood for the whole nation and the Communist Party stood for the working class, even before Lenin’s death the “Old Guard” of revolutionary Bolsheviks had come to stand for the party. Until about 1930 a considerable amount of internal debate still occurred within the ruling elite, but through a series of brilliant and/or desperate maneuvers, Stalin ensured that his faction stood for the inner circle and finally that he himself stood for everything: not just the Politburo and the Communist Party and the Soviet state, but the entire Russian people and their confused, aggrieved sense of historical greatness and present-tense misery.

My point is not that the process of substitution that leads from mass-movement idealism to one-man rule is possible and that Donald Trump is trying to do it, but almost the opposite. The process is exceptionally difficult and takes a long time and sustained effort; Trump might like to wield that kind of power, but is too lazy and stupid to pull it off. (No one would ever have applied those adjectives to Stalin.) If Comrade Trotsky could be present for this lecture, I think he would agree that Trump is a low-grade TV parody version of the Great Friend to All Patriotic Tractor Drivers, seeking to establish despotic rule with no movement, no revolutionary party and no ideology, through the kind of shortcut history cannot abide.

I don’t mean that to be comforting, necessarily; it’s a sad commentary on the state of American political life that the Trumpian putsch kinda, halfway worked. Trump’s vision and ambition, in a certain sense, are impressive: He saw the potential of social media and used it to leapfrog over all the intermediate steps of hard political labor that slowed Stalin down, offering himself as a direct substitute for the most retrograde, most fearful and most poorly informed sector of the American population. It was as if Stalin had emerged directly from the peasantry, announcing that school was for pussies, serfdom was how a man could prove himself and from now on the pinhead elitists of Petersburg would live in pig excrement like everybody else.

Trump conquered a supposedly major political party because it had lost its sense of mission, its core ideology and most of its voters, and was committing slow-motion demographic suicide by drinking ever deeper from the poison cup of white supremacy. He was elected president because of a bizarre anachronism baked into the American republic from the beginning, and because the other major party had a different version of the same problem with mission-drift and audience, and had convinced itself that the ignorant, racist troglodytes could be endlessly ignored, patronized and sneered at.

Stalin was many things, including one of the worst mass murderers in human history. You cannot claim, however, that he was an unsuccessful tyrant. Through brute force and propaganda and willpower and an intuitive understanding of the Russian national psyche, he modernized his nation at an unbelievable pace — and an unbelievable price — and waged a grinding, devastating ground war that ultimately defeated the greatest military machine in European history. A large majority of the Soviet people worshipped him and trusted him as much as they feared him, whatever they may have said about it later.

Donald Trump yearns to be that kind of terrible and heroic figure whose portrait old ladies put up above the mantelpiece, no doubt. (His supporters yearn to live in that kind of country, perhaps — as long as they don’t have to get off the couch.) Mercifully, he will not get the chance. Trump talks big about patriotism and winning wars and building walls and all that, but as the American people are slowly beginning to grasp, his policies are only words and his words are only bluster. He not only doesn't mean what he says: He doesn't understand what he says, and he doesn't mean anything.

Trump is not a substitute for any social class or coherent political grouping, only for the mass stupidity, small-mindedness and narcissism that has long festered at the bottom of the American pond. He has already proven to be the most incompetent president any living person has ever seen or will ever see, and his “movement” is nothing more than a transitory moment, a collective fantasy of disgruntled and semi-downtrodden white people who feel unhappy about something but aren’t sure what it is or whom to blame.

That fantasy is already beginning to fade, but I tremble for the future when I contemplate its after-effects. Our own, uniquely American insta-version of Trotsky’s substitutionism has produced not a fearsome Machiavellian overlord but a yawning chasm of nothingness, a man who represents the American people only in our emptiest and vilest yearnings, our greed, hatred, lust, anger and wounded pride. It can't be a good sign.