What Gerald Ford had that Mike Pence doesn't

Pence can't be perceived as trying to destroy Trump's presidency, but he also must avoid tarnishing himself 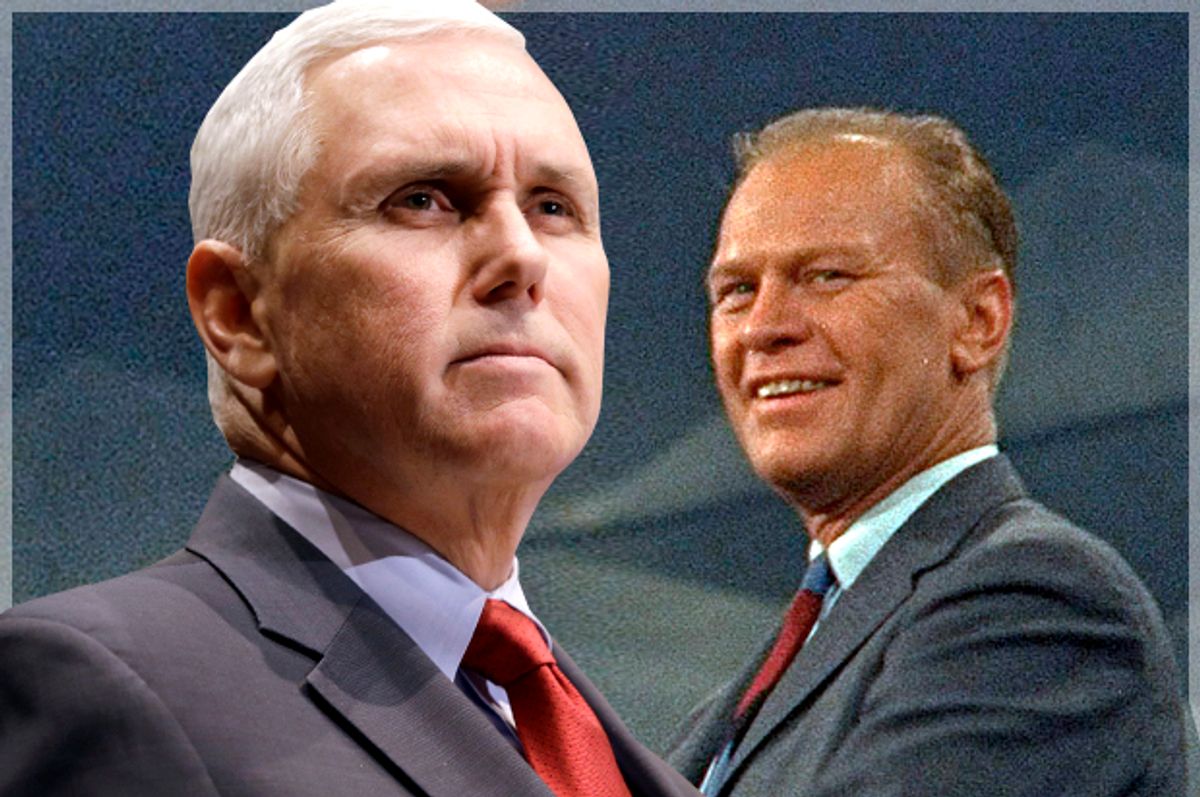 As Democrats focus more and more on the possibility that President Donald Trump has committed impeachable offenses, many are also asking whether they should place the spotlight on Vice President Mike Pence. After all, Pence has so far joined the rest of the Trump administration in defending the president despite the numerous scandals that swirl around him and continue to get worse. Wouldn't that undermine his credibility if Trump was forced to resign in disgrace and Pence became the 46th president of the United States?

I am reminded of an anecdote by the only other vice president to find himself in this position, Gerald Ford.

Like Pence, Ford was heavily criticized for his public defenses of President Richard Nixon at a time when the walls of the Watergate scandal were starting to close in. Yet when Ford slipped up and told a reporter that he believed Nixon would have to resign but he didn't want anyone thinking he (Ford) had contributed to that resignation, he immediately panicked and realized that he had to keep a lid on his moment of unintentional candor.

This is as good a place as any to examine the similarities and differences between Ford and Pence. Both men are Midwesterners (Ford from Michigan, Pence from Indiana) with extensive political experience and a reputation for being cool-headed and affable. Each one is definitely "establishment" in terms of their standing within the institutional Republican Party itself, and both have avoided developing too many deep personal enmities despite their extensive political careers.

On the other hand, Ford was an ideological moderate (arguably the last GOP president deserving of the term), while Pence was the most right-wing vice presidential nominee in 40 years when Trump picked him. Ford had a squeaky clean reputation, while Pence has a major corruption scandal in his own past and owes his very selection as Trump's vice president to the intervention of former campaign manager Paul Manafort, who has since been disgraced (Ford didn't even become Nixon's vice president until Nixon's initial vice president, Spiro Agnew, resigned).

All of this means that, while Ford was well-poised to heal the nation upon inheriting power in 1974 (and his approval ratings were quite high until his controversial decision to pardon Nixon), Pence would likely face more of an uphill battle.

While I have no idea whether Pence, like Ford, believes that his boss is doomed, I suspect that he shares Ford's trepidation about being perceived as adding fuel to the fire of the president's scandals. The reason is obvious: He'd be the major beneficiary if Trump left the Oval Office.

Is Pence in the right for doing this? Maybe.

While it's valuable to not be viewed as a Machiavellian schemer, Pence risks swinging too far in the other direction and being perceived as part of the same set of problems that are being created by Trump and Trumpism. If Trump needs to resign, Americans will have to turn to Pence to restore faith in the American government. That will not be possible if Pence is viewed as an extension of the corruption that took down Trump, rather than an antidote to it.

When it comes to avoiding that outcome, Pence may be running out of time. Although he has not been personally implicated in any of Trump's scandals, a point is being reached in which continuing to lie on behalf of this president will seem not only willfully obtuse, but downright complicit. One of the reasons Ford was such a great president (an opinion that many historians do not share) is that he was able to set a good example with his personal character. Trump, by contrast, is a president whose personal character is appalling, regardless of whether one believes he engaged in criminal activity — you don't have to think he committed sexual assault to be disgusted by his willingness to brag about it, or to think he means what he tweets to think his incessant online sniping is beneath the dignity of his office.

The president is supposed to do more than craft policy. He or she is also supposed to be a role model, someone that we can say embodies the basic decency that we expect from every American citizen. Ford had that quality, even when he was trying to publicly avoid believing the worst about Nixon.

If Pence has that same characteristic, he needs to start showing it — and soon.