Whose line is it anyway? Humor and hopelessness in “I Love Dick” 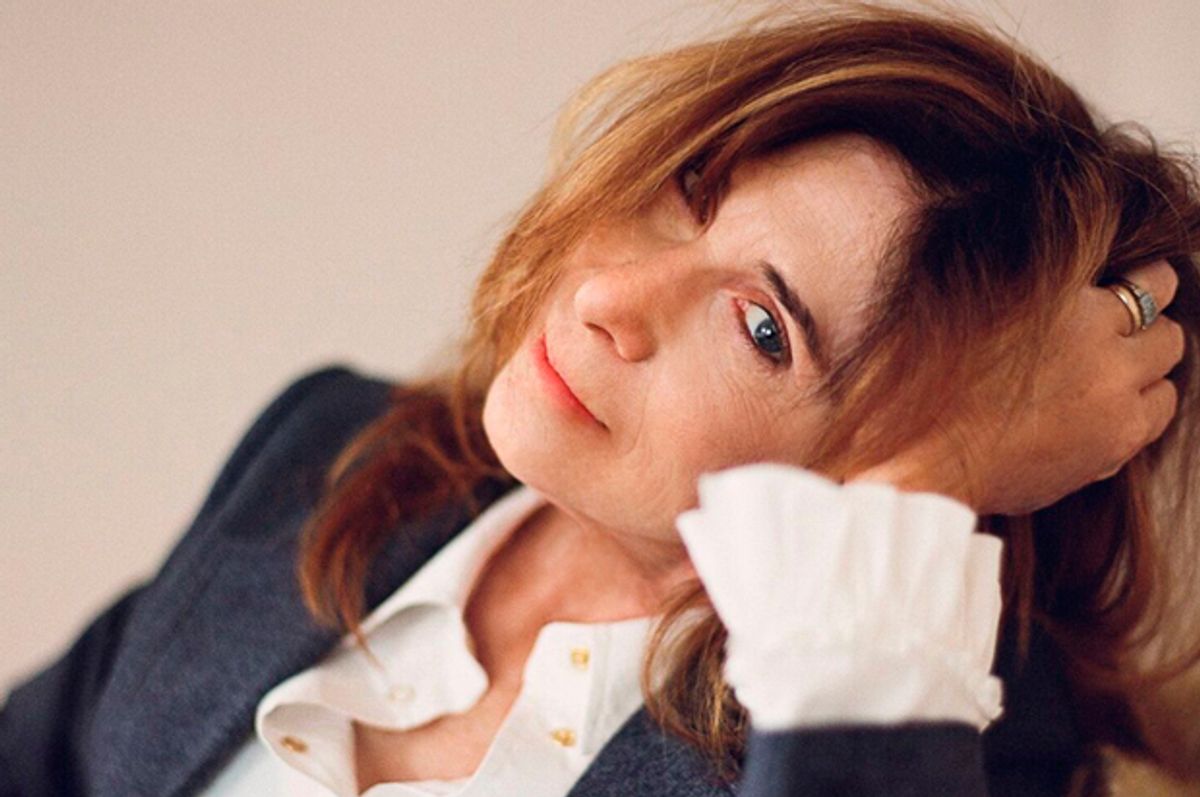 Seventeen years ago, the writer and filmmaker Chris Kraus and I did a reading together at Halcyon, a now defunct coffee house in Carroll Gardens, Brooklyn. Kraus’s first novel, “I Love Dick,” had come out a few years earlier to modest success, a reality which I found flabbergasting. The little yellow Semiotext(e) Native Agents paperback had changed the way I thought about writing and art. I spent an inordinate amount of time talking about “I Love Dick” and getting people to read it, including my mother, who informed me that Sylvère Lotringer, Kraus’s then-husband, a Columbia professor, critic and cultural theorist well known for introducing Baudrillard and Paul Virilio to U.S. intellectual types, wasn’t really French or even Polish but Hungarian! We argued back and forth about this. My mother won.

That night at Halcyon, however, Kraus read an excerpt from her second novel, “Aliens & Anorexia,” and I read a terrible scene from my first unpublished novel, “Whore of Babylon,” in which the protagonist goes for a hallucinatory run in Prospect Park.  Afterwards, Chris came up to me. She was with Sylvère and it was amusing to see this infamous academic and the author of “Overexposed: Perverting Perversions” standing next to a giant fuzzy lamp shaped like a banana as Kraus and I chatted about each other’s work. “I love what you read,” Kraus told me. “It was about running and rage.”

To understand the import of this moment, even “I Love Dick” finally being made into an eight-episode series on Amazon, co-created and produced by Jill Soloway (“Transparent”) who also directed two of the episodes, you have to go back in time. Not merely to the bygone era of Halcyon and the early days of still-affordable, gentrifying Brooklyn or even as far back as 1997, when I happened to meet Kraus through a friend of mine who was writing an article about “I Love Dick” for the Forward; or even to 1955, when Kraus was born in the Bronx; but to 1936 or thereabouts, when the French philosopher, activist and mystical anorexic Simone Weil was scribbling in the infamous notebooks which would posthumously form “Gravity and Grace” and cause many a depressed college student to lose their mind. Note: “Gravity & Grace” is the name of Chris’s failing but ultimately redemptive film in “I Love Dick.”

Weil herself, a classmate of Simone de Beauvoir, is also one of subjects in Kraus’s “Aliens & Anorexia.” If you’re a Krausologist, you know that her books are never about just one topic or person, rather they are a kaleidoscope of references both literary and cultural. Thus, Simone Weil the character, or in this case, the alien in question, becomes a living, breathing entity as well as the embodiment of the ideas she espouses: starvation and Marxism especially. “Anorexia is a violent breaking of the chain of desire,” Kraus writes, as she stares into her friend’s kitchen cabinets. Is this a serious moment of private reflection — Kraus’s writing is at once deeply personal and unfiltered — a theoretical construct or an inappropriate bon mot? Answer: d) all of the above.

You might ask, what’s so funny about a French mystical philosopher dying of anorexia during WWII? Or a then-little-known author with a case of Crohn’s and an eating disorder married to a schmucky academic and obsessing over a media theorist who doesn’t give AF? To the uninitiated, admittedly, not a whole heck of a lot. But to others, who see the human condition in all its disgusting, unfair, and ultimately humorous glory, Kraus is funny and perceptive above all else. Yes, of course she is a feminist and her writing is about gender, desire, power and agency, but what Jill Soloway and Sarah Gubbins (“I Love Dick” co-creator/writer/ producer) both understand innately about Kraus and her character Chris, played by the always amazing Kathryn Hahn ( “Transparent”), is that she’s every woman, only a funnier, more amped up, brilliant version — like Mary Tyler Moore if Mary Tyler Moore had been a stripper and read Flaubert.

“There’s no pretension in Chris, either the character or the author or artist,” says Sarah Gubbins. “It’s the language she speaks in her emotional and intellectual sphere. You can’t bifurcate the two of them. In the writers’ room, we were obsessed with picking up the book and reading from it every day. It was almost like a Bible group.”

“I didn’t start out writing ‘I Love Dick’ as a book necessarily,” Kraus tells me. “I intentionally wrote it as a comedy. I wanted it to be entertaining like ‘Dangerous Liaisons.’ It’s like what Tim Berrigan said: ‘Poetry must be amusing, like the muses, but also amusing.’ By the same token, writing a book is a seduction. You’re performing a seduction of the reader. In this sense, the reader is Dick, but he’s really a canvas. We project everything onto him and then we almost forget about him.”

Though many critics assert Kraus invented a new form with “I Love Dick,” this may be because they are uncomfortable with the book’s humor. True, there is an almost willy-nilly layering of many genres: literary fiction, essay, memoir, epistolary novel and art criticism to create something akin to autofiction — Kraus describes the genre as “Lonely Girl Phenomenology,” though Gubbins simply calls it “graphomania” —  yet the book flows seamlessly through “The Yellow Wallpaper” of Kraus’s emotional landscape to arrive at a well-placed punchline. That the writer herself is often the punchline of her own jokes is part of the Theater of Cruelty, an in-joke that perhaps only an Artaudian like Sylvère might get, but then again, it’s never clear for whom she’s writing the novel beyond the three people in her love triangle. Watching, the reader feels voyeuristic, as if laughter must be stifled. As though you’re privy to something oddly pure.

In the novel, Chris, a 39-year-old experimental filmmaker, has followed her husband Sylvère, a professor, to Southern California on his sabbatical, where after a single dinner and a group sleepover due to inclement weather, she develops a crush on Sylvère’s colleague Dick (Cal Arts professor Dick Hebdige IRL). Instead of getting upset at his wife’s crush, Sylvère suggests that Chris write Dick a letter to tell him she has the hots for him. She complies, first writing one, then countless letters that evoke a certain head-smacking, oh-no-she-didn’t catharsis. Even Sylvère joins in on the fun, and the the couple takes turns passing the laptop between them, dropping references to “Madame Bovary,” drinking coffee and laughing. They make love for the first time in long while. The game unites the couple, until, of course, it doesn’t. Shit gets crazy.

“I’m attracted to her bravery in her writing,” Gubbins says. “Her ability to act when she felt moved even when it was insane or embarrassing. It’s like that Samuel Beckett quote from 'Endgame': 'Nothing is funnier than unhappiness.'”

What’s also remarkable about the book is not so much Chris’s seemingly relentless pursuit of Dick, a man she barely knows, or the more than 90 pages of single-spaced letters she writes and sends to him detailing her obsession, but the art she makes out of it regardless. Her marriage takes a downward spiral that is both her fault and not her fault. (Sylvère, a child survivor of the Holocaust, is less than the ideal, loving husband. You’d have to read “Torpor,” the stunning prequel to “I Love Dick,” to chart the real downfall of their marriage.)

“This book isn’t the first book to present a complicated female anti-hero,” Kraus says. “I just finished writing a biography of Kathy Acker and she writes herself all over the page as a convoluted, fucked-up girl, literally, philosophically and intellectually. One of the goals of feminism is to eliminate that very question in culture and art. Why isn’t Jonathan Franzen asked if he is a masculinist in his art? The underlying assumption is that women have failed to make universal art because we’re trapped in the personal, but the female experience is the universal experience. Why not universalize the personal and make it the subject?”

In fact, both “I Love Dick” the novel and the show also seek to flip the script on the male gaze and reify the narrative with the woman as subject. Just in case you never leave the house, the world is created by men, for men with their precious eyeballs in mind. Women are objects. Men are funny. This lens infiltrates our everyday lives and invades our thinking until we contort ourselves to fit into its narrative and get boob jobs. It’s why Lena Dunham’s ubiquitous vagina enrages us as much as Chris’s deliberate form of graphomania forces us to cringe in spite of our own similar late-night drunk-dials. Is “I Love Dick” an exegesis on schizophrenia written as a love letter or an unwitting trip up someone’s hoo-ha? Is this thing on?

When Chris Kraus and I said farewell that night in Halcyon, I remember feeling a sense of discomfiture. Had I sounded smart enough? Did I mispronounce Simone Weil’s last name? Did Chris like me? My friend and I were renting the house in Thurman, New York, that summer where much of “I Love Dick” had taken place and I was giddy about this, but something still felt incomplete. She understood my chapter! As she put on her jacket, I grabbed her by the arm and she turned her face, that Jewish face, toward mine. I can’t remember what I said, but I know I was the subject.