"Cultural anxiety" is unpatriotic: America's mission is for liberty and justice for all 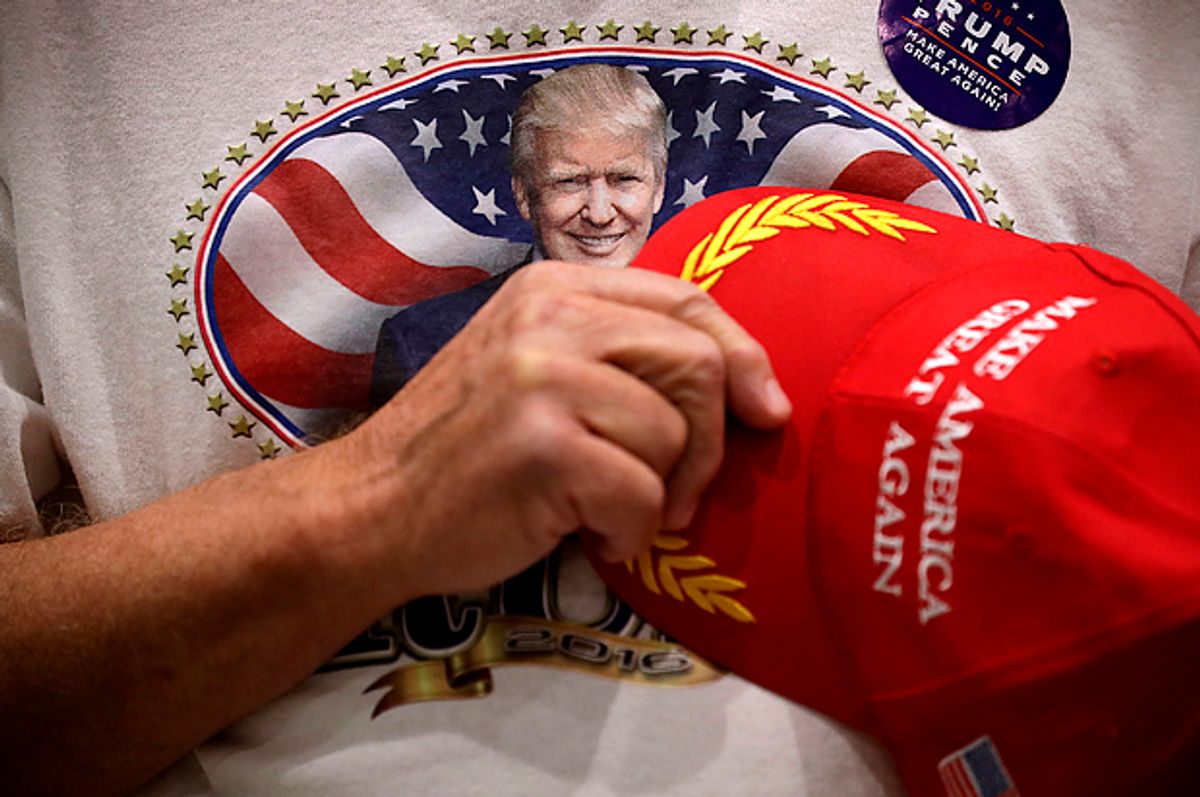 In "The Devil’s Dictionary," Ambrose Bierce defined patriotism as “combustible rubbish ready to the torch of anyone ambitious to illuminate his name.” At the risk of dealing in rubbish, I feel compelled to identify an irony of American culture: Those who most dramatically wave the flag and most loudly proclaim love of country are largely ignorant of American history and identity.

The United States, unlike most countries, lacks a dominant tradition. It does not have a national industry, religion, political party or ethnicity. The emptiness of American culture liberates immigrants and natives to pursue their own lifestyles without the imposition of pressure to conform to the doctrinal dictates of a state religion or strict familial codes of conduct, such as those prevalent in many Eastern societies. The problem with America’s hollow center is that it prevents the nation from developing a shared story. The absence of a story produces problematic replacements, such as the American Dream, which easily morphs into vapid consumption and often reduces life to material gain.

The two most prominent political tribes of American life have attempted to invent a patriotic narrative that can provide some cultural foundation for political debate. Liberals view America as the epicenter of a struggle for inclusion and representation. The black freedom movement, the struggles for women’s liberation and gay rights, the labor movement and efforts toward immigrant integration demonstrate a country — almost always initially against the will of the majority — in the continual expansion of hospitality, liberty and opportunity. Martin Luther King declared in 1963 that the civil rights movement had a mission to cash the promissory note of the American Revolution. Equal access to the ballot and equal enjoyment of public accommodations for black Americans — the descendants of enslaved people — not only made the United States a more humane and civilized country; it rescued its establishment from irredeemable hypocrisy and illegitimacy. No democracy can function under the denial of humanity to one group of citizens and the disenfranchisement of many others.

President Barack Obama, due to his adept use of autobiography as evidence and testimony to support the liberal interpretation of American history, was uniquely powerful in transforming patriotism from loyalty to the state, lust for war or celebration of wealth into the demand for diversity. With his slightly maudlin declaration that “only in America” could someone of his racial background and “funny name” run for president and wielding his greatest hit, the “Yes we can” refrain, Obama argued that acceptance and protection of America's ethnic, sexual or religious minorities was not only decent and moral but also an act of patriotism.

During a pre-election conversation with a close friend of mine who pays little attention to politics, he said that he liked Trump’s proposal for tax reform but objected to the stupid chants of “build the wall” and the unethical advocacy of banning Muslims from entry into the United States. “That contradicts the American way,” my friend told me. Not a student of history or a politically minded citizen, but an intelligent and sensitive man, my friend accepts the liberal interpretation of the American story.

The American story, according to liberal narration, is a story in development. The term “progressive,” less precise but currently more popular than “liberal,” implies that America will progress in adherence to the navigational principle “liberty and justice for all.” The “all” at any given moment might mean newly arrived Muslim immigrants, transgender people or black Americans who remain neglected by this promise.

Leftists in the U.S. who decry an emphasis on “identity issues” fundamentally misunderstand or deliberately ignore the American reality. To argue that liberals should focus solely on economic policy is to imagine that the United States, like Sweden or Norway, has a homogenous population. The Scandinavian fantasy is a luxury that unarmed black people shot by police, Native Americans subsisting on crumbs on reservations, and immigrants unjustly transported to shadowy detention centers, prove the country cannot afford.

Residing even further off the American map than colorblind leftists are right-wing fabricators who, in the absence of a single story at the heart of the culture, invent and attempt to impose one of their design and to their own benefit.

John Ashcroft, a former attorney general in the administration of President George W. Bush, once gave a speech at Bob Jones “University,” claiming, “In America, we have no king but Jesus.”

Christopher Hitchens, with characteristic precision and wit, said that Ashcroft’s sentence was “two words too long.” America has no king, and it has no official religion, but conservatives are constantly scrambling to convince their audiences that we live in a “Christian nation.”

Never legally a Christian country, America long had a majority Christian, and especially crucial, a white Christian population. Robert P. Jones, in his important and insightful book, "The End of White Christian America," explained that white Christians no longer constitute a majority in the United States. The loss of cultural authority and influence that comes with minority status, according to Jones’ persuasive analysis, is the main cause of “cultural anxiety” among white voters. It is also responsible for all the pathetic and putrid designation as “real Americans” of white, working-class Christians who live in small suburbs or rural towns — a mere 20 percent of the populace.

“Cultural anxiety” is a term of increasingly explanatory importance. A new study by the Public Religion Research Institute found that, contrary to the mythmaking of deceitful Republican strategists and lazy media commentators, voters most concerned about the economy, even within the romanticized “white working class,” preferred Hillary Clinton. It is “cultural anxiety” that drove Trump voters — poor, middle class and rich alike — to the polls.

The Public Religion Research Institute report harmonizes with previous polls demonstrating that Trump voters believed that the 2016 election was the “last chance” to save the country from destruction and that “diversity comes at the expense of whites.”

Donald Trump and his supporters, who chant, “USA!,” wear “Make America Great Again” hats and endlessly broadcast their love of everything red, white and blue, are desperate to preserve and protect their story. The country has radically changed since the 1950s, and it is continuing to change. Trump conservatives are right in their recognition of societal transformation, but they are wrong to weakly claim that they have become “strangers in their own country.”

Aside from the vomitous self-pity that many white Americans routinely display, it is historically and politically illiterate to cast whites as victims of persecution and more broadly to associate the enlargement of freedom with the demolition of America or the corruption of the American spirit.

As clichéd as it has become to recite, America is a “nation of immigrants,” and the liberal interpretation of American history, unlike the right-wing invention of it, has the advantage of historicity. Historians, journalists and political theorists can observe a slow, but steady march toward justice in the American experience. To say that “diversity comes at the expense of whites” or express the thinly veiled racism and sexism of nostalgia for the 1950s is the equivalent of announcing, “I despise American culture.”

Near Joliet, Illinois, visible from Interstate 80, is a monstrous flag barely able to flap in the breeze. I can see the gigantic banner when I drive the highway to teach at a small university in Joliet, and I’m often confused as I wonder who thought a flag of that cumbersome size was a good idea. After a national tragedy, when other flags fly at half-mast, this particular flag is at about two-thirds mast — any lower and it would touch the ground. It struggles to stand high in the sky, even on windy afternoons.

The right-wing invention of American history is much like that oversize flag. It suffers under the burden of its weight. It fails to function because it cannot escape its self-inflicted pressure. Conservatives would emancipate themselves from all their hostility and anxiety if they could accept that the United States is an evolutionary state and be able to eventually adapt to changes in its environment. Winston Churchill famously quipped that Americans can be trusted to do the right thing after they have exhausted every other option. As frustrating as it remains, Churchill’s assessment is accurate. The right wing, however, is often flummoxed even at the final second.

Conservatives could ease their burdens if they resigned from laboring under the paralytic weight of belief in America as a white, Christian monopoly. It seems that they must desperately clutch onto dreams of their superiority and authority for psychic survival.

As sad as it seems, right-wing neurosis is hardly a concern when compared with the victims it creates, and as any good history book teaches, fighting to ease and eventually erase victimization is the real American story. It also is the only sustainable source of patriotism, rubbish or not.