Welcome back to "Twin Peaks." The plot will reveal itself sometime soon. Until then, enjoy the atmosphere 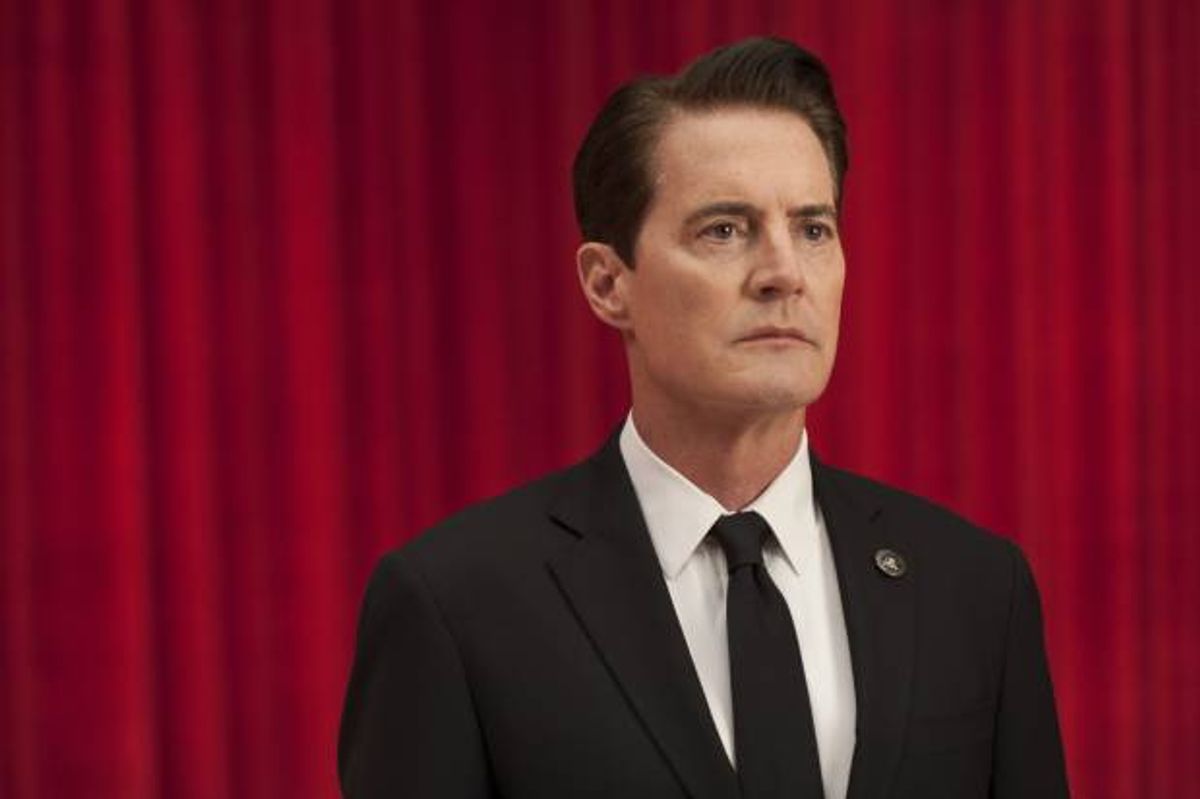 Spoiler alert: The following article discusses plot details from Sunday’s premiere of “Twin Peaks.” If you haven’t seen it yet, stop reading now.

Cocktail hour, that merry interval that precedes any gala worth attending, is a vital social lubricant. The guests arrive, mill about, take in the décor and the costumes of fellow attendees. Everybody gets a little tipsy and loosens up. Often the so-called “life of the party” doesn’t show up until after the rest have gathered. Once he’s on the scene, only then can the action kick into gear.

The Black Lodge of “Twin Peaks” is nothing if not one never-ending cocktail hour where guests sit stiffly in soft black chairs surrounded by blood-red velvet curtains. In the place of drink is a hypnotic zigzag flooring pattern worlds more disorienting than booze; in place of canapés are the occasional servings of “garmonbozia,” pain and sorrow. The hosts blink in and out, uttering statements bordering on nonsense in voices that sound like warped recordings. “Remember 430." "Richard and Linda.” “You are far away.”

Inside this holding area, FBI Agent Dale Cooper (Kyle MacLachlan) has been waiting 25 years to see Laura Palmer (Sheryl Lee) again, trapped there after his evil doppelgänger sprang himself to run wild in the real world. Sunday night Laura returned right on time during the opening chapter of Showtime’s revival, establishing that she remains dead, “yet I live.” This, before removing her face and revealing her skin to be some kind of housing for light.

The original “Twin Peaks” episodes revolve around the mystery of who killed Laura Palmer. These new episodes, premiering nearly 27 years after its first season ended, expand the mystery and take it to places far beyond the Pacific Northwest town's limits, touching New York City, Las Vegas and Buckhorn, South Dakota.

As such, the two hours of oddity the cable channel's audience witnessed Sunday night amounted to mere set-up for whatever is coming next.

Showtime, David Lynch and Mark Frost went to monumental lengths to keep everything about these new episodes a secret. Only a handful of people, including the cast, crew, a few journalists and other guests were invited to see the premiere on Friday evening in Los Angeles, two days before its official television debut. The reaction those two hours produced in The Theatre at Ace Hotel can only be described as orgasmic bewilderment. “So many layers!” one attendee was overheard marveling aloud as the place emptied, and it’s true.

Layers of what, exactly? That's all but impossible to say. Agent Cooper, the life of our party, only escaped the Black Lodge at the very end of the premiere, when he emerged in our reality inside a structure that looks like a gigantic glass box camera in New York City (huh?) only to then fall through space.

This came after many scenes of Cooper calmly and stiffly conversing with his hosts and fellow guests-cum-captives in the Black Lodge, including MIKE, the one-armed man (Al Strobel), and the new incarnation of “the arm,” which appears to be a talking wad of gum atop a bare sapling. (Maybe it’s that gum we like that was going to come back in style?) It’s unfortunate that Michael J. Anderson did not return as The Man from Another Place. But Ray Wise popped in as Leland Palmer, begging Cooper to find Laura. Our girl disappeared again, you see, screaming and fluttering like a leaf being sucked into a jet engine.

But MacLachlan’s Cooper is still the main man, and he’s just getting re-started. While the good agent has been away, Cooper’s evil double has made a name for himself as a criminal boss called Mr. C. Somehow in this guise MacLachlan resembles Gene Simmons (albeit a much better-looking version), with overly tanned leathery skin, shoulder-length hair dyed black, and a permanent scowl hovering above that square jaw — the coarse, dangerous shadow version of Cooper’s structured, refined G-man.

Mr. C is not to be toyed with, and leaves three bodies in his wake during this first appearance alone. Although he’s due to return to the Black Lodge, he has no intention of doing so. This is only one storyline of a tale that encompasses yet another strange murder, this one connected to Buckhorn’s high school principal Bill Hastings (Matthew Lillard).

Lynch and Frost’s command of absurdist humor remains sharp and intact, as does Lynch’s mastery of lingering shots and silent foreboding. Together these men know how to sculpt anticipation into high buffoonery, which can be especially effective when employed in the presence of horror. Sunday's return demonstrated this in a sequence of events set in motion when a well-meaning if forgetful woman calls the cops to report a repugnant smell emitting from a neighbor’s apartment. We all know what that portends, and the viewer probably braced herself for the disturbing putrescence that lay in wait. But the co-creators take their sweet time getting the worn-out pair of cops through that door, and they do it in the most roundabout way imaginable.

Lynch and Frost are in no hurry to grant “Twin Peaks” viewers sure hints as to where these chapters are heading, either. It could be that these new episodes exist to explain how the realm of the Black Lodge and its missing counterpart the White Lodge are connected to our reality. Or we could find out, after the limited series airs all of its 18 parts, that we’ve played along as an artistic emperor performed a lengthy interpretive dance in his skivvies.

But if you’re a fan of analyzing symbols and fine details, Sunday's two hours did not disappoint. At this moment online analysts probably are chatting about what Lynch and Frost are attempting to convey about cameras stealing souls, and did you notice the pair of precisely displayed Zs on the coffee cups Madeline Zima’s character was carrying? Was that foreshadowing or just conscientious prop placement?

Who was Mr. C talking to on the phone, if it wasn't Phillip Jeffries? What does he want with the Owl Cave symbol? And what does it mean that the Log Lady (Catherine E. Coulson) tasked Deputy Chief Tommy “Hawk” Hill (Michael Horse) with finding what’s been lost, a directive connected “to his heritage”? What does Dr. Jacoby (Russ Tamblyn) intend to do with all those shovels, and why does he need to work alone?

Devoted Peaks Freaks may be content to wait for definitive answers, and could even accept it if those never come. (Further illumination might be found in the third and fourth episodes, which Showtime released online immediately after the over-the-air premiere of hours 1 and 2. They’ll debut on the channel next Sunday.)

Aside from these inches of forward movement in the plot, much of the "Twin Peaks" premiere consisted of a parade of character re-introductions including Kimmy Robertson’s Lucy Moran and Grace Zabriskie as Laura's chain-smoking mother Sarah. Even Mädchen Amick’s Shelly Johnson and James Marshall’s James Hurley turn up near the end to hang out at the iconic Bang Bang Bar. It's still hopping after all these years, only this time Balthazar Getty lurks by the counter.

The Great Northern Hotel is in business too, still run by Benjamin Horne (Richard Beymer), with brother Jerry (David Patrick Kelly) supplementing profits with a legal marijuana business. Ashley Judd quietly appeared in that scene as Ben’s assistant Beverly. Tens upon tens of famous actors are expected to appear in these new episodes; apparently this is how Lynch and Frost will jam in their cameos, having them unobtrusively pass through before disappearing into the background. Some of us are still holding out hope that Laura Dern will turn out to be Agent Cooper’s never-before-seen confidante Diane.

Be that has it may, very little of this re-entry into “Twin Peaks” makes any sense. Yet it’s admirable that the drama’s creators have found a way to update the universe without relinquishing its signature atmosphere. The story still wields the power to mystify and confuse, even 26 years after the original episodes ended. Lesser revivals stoked similar levels of excitement only to flail once viewers actually saw the proof of what was behind the fuss. The return of “Twin Peaks” revels in the plot’s coy confusion, seducing the viewer in the manner of the girl who seized their attention all those years ago. As she promised back then, Laura Palmer has returned. What she and the series have shown us earns an initial investment, at the very least, to see where this weird trip heads to from here.