Going for funny without sacrificing sexy "Baywatch" beaches itself

Trying to prove that there's more to the franchise than meet the eye, "Baywatch" trips over its own witty repartee 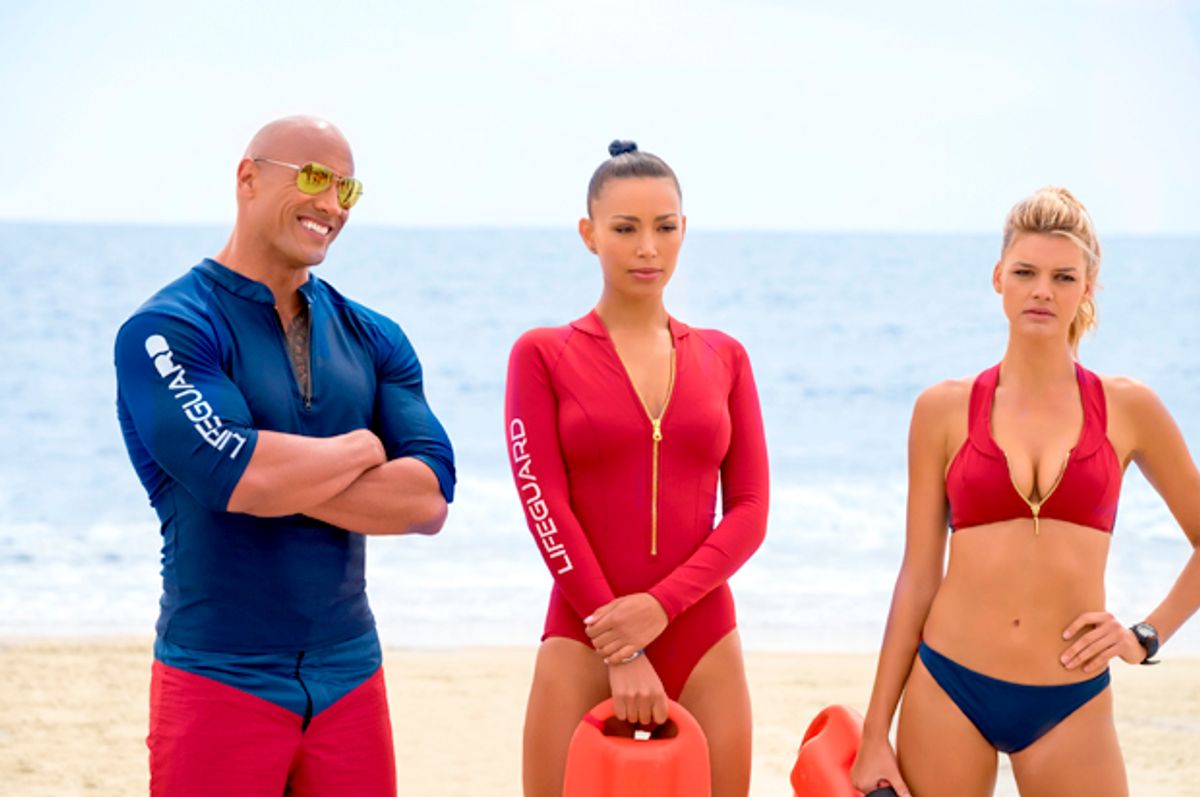 “The bodies were dead before they hit the water,” observes Mitch Buchannon (Dwayne Johnson) in “Baywatch,” the big-screen version of the popular TV series. And like those bodies Mitch describes, this film is strictly dead on arrival.

The TV show may have been mindless, but the film is mostly a barrage of puerile, unfunny dick jokes. An early scene involves Ronnie (John Bass) getting his junk stuck in a wooden beach chair after CJ (Kelly Rohrbach) gives him the Heimlich maneuver — in glorious slow motion, to best emphasize the jiggle of her pert buttocks. The extended gag, which involves various folks commenting on Ronnie’s imperiled penis, however, feels rehashed from a Farrelly brothers’ movie.

But wait, there’s still more below-the-belt humor. In one scene, Matt dons drag to go undercover, looking ri-dick-ulous with all his muscles bulging. Efron might generate a smile as he adjusts his manhood in his too-tight dress, but the disguise is superfluous. Moreover, when Efron uses a girlie voice as he pretends to be his own balls talking to Mitch’s balls in another scene, “Baywatch” just gets downright desperate.

Curiously, despite the R-rating and all the cock teasing, there is absolutely no female nudity, which will disappoint teenage boys, almost as much as this film disappoints anyone expecting to be entertained. The two credited screenwriters, Damian Shannon and Mark Swift, consistently flail in most of their attempts at humor. Even a throwaway line mistaking J. Edgar Hoover for “the vacuum guy” lands a groan, rather than a guffaw.

The film’s plot is certainly stupid. As lifeguards Mitch and Stephanie (Ilfenesh Hadera) train Matt, Ronnie and Summer (Alexandra Daddario), they uncover a dastardly scheme — which could have been lifted right out of “Scooby Doo” — where club owner Victoria Leeds (Priyanka Chopra) is dealing drugs to drive down real estate prices and bribing officials so she can take over the bay.

And she gets away with it as long as Mitch and Matt are distracted fighting with each other to see who is the biggest dick, er, who gets to be the lifeguard in charge. The guys’ rivalry consists of name-calling as well as strenuous physical endurance tests — none more difficult than sitting through this lousy film. Even when “Baywatch” gets around to having Mitch and Matt kiss, it is actually far less satisfying than anyone with lowered expectations might imagine.

Perhaps the only area where the film distinguishes itself is underwater. There is exactly one visually interesting scene of Mitch and Matt swimming in the water to reach a boat on fire. Shots of flames are seen overhead while the characters are immersed in the bay. Even if the images are CGI, it is kind of impressive.

But so much of “Baywatch” is tired and uninspiring. The supposed sexual tension between Matt and Summer is nonexistent; a scene of her catching his ogling of her breasts goes on too long with no real payoff. Likewise, the running gag of Ronnie's being embarrassed in front of the beautiful, nonjudgmental CJ grows tiresome. And the macho dude-bro bullshit between Mitch and Matt is more annoying than amusing.

One of the most offensive lines in the film describes Matt as the “Stephen Hawking of swimming,” which only shows how far the screenwriters will go for a crummy joke. In fact, one of the screenwriters’ favorite phrases (it is uttered several times in various iterations) is “Not a single fuck was given.” And apparently, that seems to be the case. The actors mostly phone in their performances.

Dwayne Johnson appears to have been cast more for his beefy body than his charisma. The actor generally has an easygoing presence on screen, but he comes across very stiff here. Even when Mitch fights a criminal in a young child’s bedroom, the action is forced and unfunny.

Efron also wears out his welcome. Whereas the heartthrob has recently made his career all about taking off his shirt, his pumped-up physique is actually too extreme; he actually looks better with his shirt on now. As for Efron’s recent spate of lowbrow comedies, he seems to have hit rock bottom with “Baywatch,” playing up his arrogance rather than his appeal.

The only performer who seems to be in on the joke is Kelly Rohrbach, who embraces her character CJ and does not take the film too seriously. She seems to be having a good time. If only the film was as infectious.

Sadly, the anticipated cameos by “Baywatch” icons David Hasselhoff and Pamela Anderson are anticlimactic, adding nothing to an already underwhelming film. The biggest disappointment of this feature is that it’s not even so bad it’s good.